Abstract
Next generation sequencing (NGS) technology has revealed the heterogeneity of diffuse large B-cell lymphoma (DLBCL) from a mutation perspective. Accordingly, the conventional cell of origin-based classification of DLBCL has changed to a mutation-based classification. Mutation analysis delineates that B-cell receptor pathway activation, EZH2 mutation, and NOTCH mutations are distinctive drivers of DLBCL. Moreover, the combination of RNA expression data and DNA mutation results suggests similarity between DLBCL subtypes and other non-Hodgkin lymphomas. NGS-based dissection of DLBCL would be the cornerstone for precision treatment in this heterogeneous disease in the near future.
Keywords: DLBCL, NGS, RNA, Clustering, Classification, Genomics

Diffuse large B-cell lymphoma (DLBCL) is a heterogeneous disease. Attempts to classify DLBCL dates back to the early 2000s, and the cell-of-origin (COO) approach was attempted based on RNA expression data [1]. This is closely related to the pathogenesis of DLBCL, because it is an attempt to distinguish the time point of lymphoma development based on the germinal center reaction.

Since 2010, with the development of the next generation sequencing (NGS) technique, information on many mutations has accumulated at the DNA level, and studies on this mutation have also been published in the DLBCL field. Since the research on the level of DNA in cancer is closely related to the development of targeted therapeutics, these studies are expected to be used as a meaningful starting point for the development of novel therapeutics for DLBCL. In this paper, we review recent studies at the DNA level of a typical DLBCL and discuss future perspectives.

(1) Reddy .’s research was published in the Cell magazine in 2017 [2]. The results of whole-exome sequencing-based studies of 1,001 patients were combined with cell line experiments using the CRISPR technique. Important mutations in the activated B cell-like (ABC) and germinal center B-cell-like (GCB) DLBCL were also listed. Based on these results, was selected as an essential mutation in the ABC, whereas was selected as an essential mutation in GCB DLBCL. However, this study did not explain DNA mutation-based disease clustering, but only explained the existing RNA-based or translocation-based classification with DNA mutations. Rather, they focused on the prognostic significance of the mutations (Fig. 1). 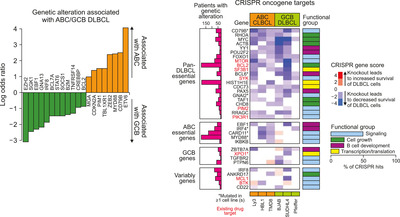 (2) Chapuy .’s study was published in the journal Nature Medicine in 2018 [3], and this study had a great significance in the sense that DNA-based classification of DLBCL was successfully performed. Whole exome sequencing was performed on 304 patients, and DLBCL was classified into C1-C5 subtypes. It should be noted that this classification was characterized by not only DNA mutation information but also relatively various information, such as fusion and chromosomal abnormality.

(3) Schmitz .’s study was introduced in the New England Journal of Medicine (NEJM) in 2018 [4], and this study classified DLBCL into four categories based on DNA mutations and major fusions. Whole exome sequencing was performed with a sample of 574 patients, and they were classified into the multi-centric Castleman’s disease (MCD), BN2, N1, and EZB groups (Fig. 2).

Figure 2. Mutation based on the new classification of diffuse large B-cell lymphoma (Schmitz . 2018).

(4) Lastly, although not at the DNA level, I introduce an important study based on protein-protein interaction [5]. Phelan . [5] demonstrated that , , and B Cell Receptor (BCR) combine to form a supercomplex using CRISPR screening and protein-ligation assay (PLA), which is an important biomarker for predicting the response to Bruton’s tyrosine kinase inhibitors. However, because PLA is not a technique widely applicable in clinical practice, the technical barrier to measure the appropriate protein-protein interaction must be overcome if this supercomplex is to be utilized in clinical practice (Fig. 3). 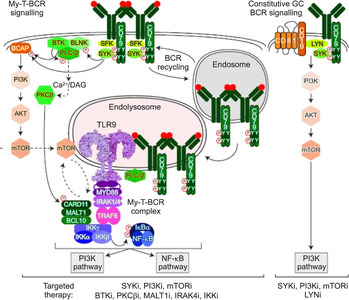 Statistical clustering of DLBCL: Rather than making novel discoveries for pathogenesis based on previous studies, attempts to elaborate the classification of DLBCL are ongoing. Research using big-data-based clustering techniques is in full swing. Such a clustering approach has already been introduced for acute myeloid leukemia [6], where cancer genomic research has been initiated. Similar attempts have been made for DLBCL. The following are some recent studies:

Returning to the cell of origin with genomic profiling: In the other direction, studies are ongoing to trace the cell of origin based on these mutation approaches. On the solid cancer side, mutation studies on metastasis of unknown primary/origin have been conducted to identify the cell of origin based on molecular characterization [9]. This molecular testing-based COO finding would be useful in lymphoma areas where biopsy is not always feasible. In particular, it will be a tool that can properly utilize effective treatments, such as bendamustine and ibrutinib for specific types of lymphomas for DLBCL.

New drug discovery with genomics: Finally, an attempt is being made to develop a new drug based on molecular testing. The discovery of the My-T-BCR supercomplex and the development of new drugs based on the CBM complex are expected to open the era of truly customized treatment for DLBCL.

In Korea, the NGS panel for DLBCL is also reimbursed, but DLBCL has a distinct mutation profile from other cancers; thus, a custom design is required. Considering the domestic lab-developed test type service behavior, it is thought that the consensus of domestic pathologists and laboratory medicine physicians is necessary for the nationwide expansion of appropriate lymphoma panel services. Only when appropriate panel services are performed in domestic hospitals can domestic real-world data-based DLBCL research be properly conducted in the future.