TO THE EDITOR: The thrombopoietin (TPO) pathway is the primary signaling mechanism that drives platelet production [1]. In healthy individuals, the TPO pathway is activated in response to circulating platelet levels. However, patients with immune thrombocytopenic purpura (ITP) cannot mount an adequate TPO-mediated response to compensate for the immune-mediated platelet destruction, leading to a net decrease in platelet count [2-5]. TPO receptor agonists (TPO-RA) bind and activate the TPO receptor in ITP patients. ITP is effectively treated with TPO-RAs, namely eltrombopag and romiplostim. However, some patients do not benefit from the initially prescribed TPO-RA [6, 7]. Since the pharmacodynamic and pharmacokinetic properties of eltrombopag and romiplostim differ from one another, switching to an alternate TPO-RA is a viable salvage treatment option. Retrospective clinical data reported response rates ranging from 65% to 100% after switching from eltrombopag to romiplostim [8-12]. In this report, we share our experience of switching TPO-RAs in heavily treated ITP patients. The efficacy of romiplostim was maximized by adding danazol.

This was a retrospective pilot study involving adult patients over 18 years old, diagnosed with chronic ITP but failed to respond to corticosteroids, intravenous immuno-globulin, and eltrombopag. The diagnosis and response evaluation were performed according to the American Society Hematology guidelines [13]. These patients were treated with romiplostim after failing to respond to eltrombopag. Romiplostim was initiated at 1 mg/kg and escalated weekly until the platelet count reached ≥50×109/L. The maximum dose was capped at 10 mg/kg. If the platelet level was not stabilized by the maximum dose of romiplostim, danazol was added at 200 mg once a day per the physician's choice. The dose and duration of danazol treatment were decided by the physician, with the maximum dose capped at 600 mg. Among the 16 patients, eight received danazol. The characteristics of all patients are shown in Table 1. This study was conducted following the Declaration of Helsinki and was approved by the Institutional Review Board of Seoul National University Hospital (IRB number: H-1909-116-1066). The differences between the groups were assessed using the Student's t-test or one-way analysis of variance for continuous variables, and Pearson's chi-square test for categorical variables. Statistical significance was set at <0.05. The data were analyzed using the Statistical Package for the Social Sciences software (SPSS Statistics version 22.0, IBM Corp., Armonk, NY, USA).

All patients underwent bone marrow biopsy to rule out other etiologies before romiplostim administration. The median duration of ITP was seven years (range, 2–28 yr) from the start of romiplostim. There was a median of five prior treatments.

All patients in the group, supplemented by danazol, achieved a complete response (CR) within the median follow-up of 1.4 (range, 0.3–2.9) years. The median time to danazol addition was four weeks, and as shown in Fig. 1 the mean platelet count spiked and stabilized with the addition of danazol. The median time to the best response was 11 weeks. The maximum romiplostim dose was 8 mg/kg per patient, and the median dose was 5 mg/kg. The maximum danazol dose was 600 mg per patient, and the median dose was 300 mg. Once started, the patients continuously received danazol throughout the follow-up period. There were two cases with adverse events. One patient complained of headache, while another complained of tinnitus. For these patients, danazol was discontinued until the symptoms resolved. Upon re-challenge, the patients adequately tolerated the drug, and they continued receiving danazol. Two patients relapsed within three months of romiplostim discontinuation after achieving CR. Romiplostim treatment was restarted, and the patients responded well. 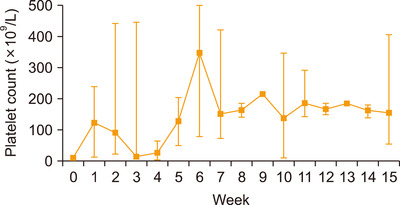 Among the 16 patients, eight patients did not receive danazol because they refused, based on their previous experience with the drug and physician's choice [4]. Among these patients, seven achieved a partial response or better (87.5%), while six (75.0%) achieved CR. Due to the study's retrospective nature and the small number of patients, the direct comparison did not show statistically significant differences between the patients who received and did not receive danazol. Considering the 100% CR rate in the danazol recipients, this combination warrants further evaluation.

The promising treatment results of danazol were first documented in 1987 [14]. Since then, it has been used as a second-line treatment for relapsed/refractory ITP. Danazol, a synthetic attenuated androgen, induces platelet elevation by antagonizing estrogen and reducing platelet destruction via immune modulation [3, 13]. Combining TPO-RAs and danazol regulates the pathophysiology of ITP, excessive platelet destruction, and impaired platelet production, ultimately eliciting better responses from ITP patients. In addition, danazol enhances the stability of romiplostim by blocking romiplostim neutralizing antibodies. In this setting, an escalated dose of romiplostim is insufficient to overcome romiplostim resistance. Adding danazol reverses the paradoxical effect of megakaryopoiesis recovery on endogenous TPO levels. However, the exact mechanism of their synergistic effect requires further investigation.

In conclusion, this pilot study showed that 1) TPO-RA switching was a viable salvage therapy option, even in long-standing heavily treated ITP patients; and 2) danazol exhibited a synergistic effect when combined with romiplostim, leading to rapid platelet count stabilization. Based on the results of this study, a prospective phase II study (ClinicalTrials.gov Identifier NCT04289207) will be conducted to corroborate the preliminary findings.

The results of this study have been submitted to the 70th Korean Association of Internal Medicine Annual Meeting, Seoul, Korea.