In hematologic malignancies, recurrent chromosomal abnormalities play a significant role in leukemogenesis [1]. Gene fusions and mutations, including those in and , are major recurrent genetic abnormalities in acute myeloid leukemia (AML) and have been established as major indicators for classification [2]. Further, genes involved in DNA methylation, including , , , and , were found to be frequently mutated, especially in the cytogenetically normal karyotype (CN)-AML [3, 4, 5, 6]. DNA methylation, involved in the silencing of tumor-suppressor genes, has been associated with not only leukemogenesis but also with the clonal evolution of the myelodysplastic syndrome to AML [7, 8]. Therefore, mutations in these genes may alter DNA methylation and may play an important role in disease pathogenesis in CN-AML. Somatic mutations in have been reported in approximately 20% and ~30%–35% of total AML and CN-AML, respectively [4]. Most mutations in AML have been found to be heterozygous and have been associated with changes in DNA methylation [9, 10]. A missense mutation, R882H, located in the methyltransferase domain, has been found to be the most common mutation [11, 12]. R882H DNMT3A inhibits the expression of the wild-type DNMT3A and reduces the de novo methyltransferase activity, which results in the focal hypomethylation at specific CpGs throughout the genomes of AML cells [13].

, located in band 9p21 adjacent to , encodes a cyclin-dependent kinase inhibitor, which forms a complex with the cyclin-dependent kinase 4 (CDK4) or CDK6, and induces a G1-phase cell-cycle arrest by inhibiting CDK4/6. It also plays an important role in the regulation of cellular commitment of the hematopoietic progenitor cells and myeloid cell differentiation [14]. mutations in patients with AML have been reported to cause different degrees of the DNMT3A activity and have resulted in a heterogeneous DNA methylation (hyper-methylation or hypo-methylation) [15]. Various studies have shown conflicting data on the association of mutation and promoter methylation in AML. has been reported to be commonly silenced by deletion or hypermethylation in AML, but R882 DNMT3A has been reported to reduce the DNA methylation activity, causing a focal methylation loss [16]. A comprehensive understanding of the association of mutation with promoter methylation remains to be elucidated, along with the effect on its expression and clinical significance.

In this study, we analyzed the characteristics and clinical significance of mutations in AML and their influence on promoter methylation and expression of . In addition, we evaluated the changes of the R882H DNMT3A mutational burden after chemotherapy to understand its significance.

This study was approved by the institutional review board of the Seoul St. Mary's Hospital, the Catholic University of Korea (KC17SESE0768). A total of 142 adult patients, recently diagnosed with de novo AML at the Seoul St. Mary's Hospital from June 2015–February 2017, were enrolled in the study, consecutively. Patients who had undergone chemotherapy previously or had an antecedent hematologic disease, acute promyelocytic leukemia with , pure erythroid leukemia, acute megakaryoblastic leukemia, and acute leukemias of an ambiguous lineage were excluded. Diagnosis and classification of AML were based on the guidelines by WHO (2016) [17].

Bone marrow cells were aspirated from patients, cultured under unstimulated culture conditions for 1 d–2 d, and harvested. Karyotyping was carried out using the Giemsa banding techniques. At least 20 metaphase-cells were analyzed. Cytogenetic abnormalities were classified according to the 2016 guidelines of the International System for Human Cytogenetic Nomenclature [18]. Mutations in , , and were analyzed by a bidirectional Sanger sequencing using primers designed with Primer3 (

CpG methylation in the promoter region of was quantified using pyrosequencing. The EpiTect Bisulfite Kit (Qiagen, Hilden, Germany) was used for bisulfite conversion of genomic DNA; the PyroMark Gold Q96 Reagents (Qiagen) and the PyroMarkTM Q96 ID instrument (Biotage AB, Uppsala, Sweden) were used for pyrosequencing, according to the manufacturer's instructions. A total of seven CpG sites were analyzed per sample. The primers for the analysis of -specific CpG regions were the same as those used by our group in a previous study [20].

Primers and probes were derived from RefSeq NM_022552.4 using the OLIGO ver. 7.51 software (Molecular Biology Insights, Inc., Cascade, CO, USA). The PCR reaction was carried out as follows: 2 min at 50℃, 10 min at 95℃, 50 cycles of 15 s at 95℃, and 1 min at 60℃ on a Mx3000PTM Real-Time PCR system (Stratagene, San Diego, CA, USA). Data were analyzed using the MxPro version 4.10 (Stratagene). mutant allele burden was calculated as a ratio of the copy number of mutant to that of β-actin. The analytical performance of the quantitative PCR assay has been described in the Supplementary data.

The correlations between parameters compared in contingency tables were found using the Chi-squared (χ2) test. The Kaplan-Meier survival analysis was used to estimate overall survival (OS) and to compare differences between survival curves. OS was measured from date of initial diagnosis to the date of death, or last follow-up, from any cause. The multivariate Cox proportional-hazards regression method was used to analyze independent prognostic factors for OS. The variables, including age; karyotype; presence of mutations in and -ITD; subgroup of AML, such as a biallelic mutation with a mutated , and AML with myelodysplasia-related changes (AML-MRC), were used as covariates. All statistical analyses were done using MedCalc (MedCalc Software, Ltd., Ostend, Belgium) and the level of statistical significance was set at <0.05.

Clinical, cytogenetic features and WHO 2016 based classification of mutations

Association of mutation and

Prognostic effect of mutation in AML and CN-AML

Clinical outcomes according to mutation, age, and cytogenetics as independent prognostic factors

We performed quantitative analysis of the R882H mutation in in 17 samples from eight patients. We used /β-actin ratio as quantitative R882H mutation index. The average value of the mutation (DNMT3A/β-actin ratio) was 0.81±0.22 at the time of diagnosis. Sequential follow-up was done for four patients (UPN 16, 23, 26, and 27) of AML with mutation. The mutant burden decreased after induction chemotherapy; however, the reduced value was variable. mutations disappeared after induction chemotherapy in the patient, UPN23. Patient UPN27 showed a marked decrement of the mutant burden in complete remission status (0.39% of the initial value), but it increased up to the initial value at relapse (96.57%). Patient UPN16 showed persistent mutations after achieving morphological CR (65.16%, 94.46%, and 69.34%). The patient received an allogeneic stem-cell transplantation, after which the mutation disappeared. In patient UPN26, the mutant burden decreased to 8.70% and 4.16% in the CR status (Fig. 3).

is a de novo DNA methyltransferase that catalyzes the addition of a methyl group to the cytosine residue of CpG dinucleotides, forming 5-methylcytosine. DNA methyltransferase plays a significant role in epigenetically regulated gene expression and repression. In this study, we identified mutations in 19.7% of the enrolled patients with AML, which increased to 29.5% when restricted to the CN-AMLs. For the WHO 2016-based classification, mutations were frequently accompanied in AML with mutations and were less frequently observed in AML-MRC. Noteworthy, we found a Q842R mutation in AML with t(8;21). To our knowledge, AML with t(8;21), inv(16), and inv(3)/t(3;3) rarely harbored the mutation, and this is the first reported case of mutation in AML with t(8;21) [5, 21, 22]. R882H DNMT3A was the most commonly found mutation, consistent with previous reports [23, 24]. We also detected a novel frameshift mutation located on ZNF.

Previously, a strong correlation between decreased DNA methylation and mutations in the methylation of 12 select tumor suppressor genes, including , has been reported [9]. However, we did not find a significant difference in promoter methylation, in patients with mutations, although promoter methylation was low in AML with R882H DNMT3A. Moreover, methylation levels were significantly lower in CN-AML and in AML with the mutations, which frequently accompanied the mutations. These differences may be due to the presence of heterogeneous mutations, a limited number of patients with mutations, and the technique used to determine the level of methylation, in the present study. Previously, various techniques, including Southern blotting, methylation specific PCR, and pyrosequencing, have been used to determine methylation. However, no standardized method has been identified; therefore, the methylation was heterogeneous with inter-individual differences [14].

Moreover, the presence of methylation is not always associated with reduced expression of mRNA; therefore, it will be important to investigate the expression of in AML with various mutations. We found that expression was inversely correlated with promoter methylation. Notably, patients with R882H DNMT3A showed higher expression compared to those with the wild-type DNMT3A or other mutations.

In addition, we observed that expression showed significant difference in accordance with the mutation with the mutation status. However, in this study, the number of cases analyzed were limited and further studies will be necessary to determine whether the statistical difference arises from DNMT3A R882H (Table 3).

We demonstrated that the mutations were associated with poor outcomes in AML, especially in CN-AML. Multivariate analysis results showed that mutations remained a factor affecting poor OS. Previously, mutations have been shown to be independently associated with poor outcomes [4, 22]; however, there is no consensus on the effect of mutations [25]. It seems worthwhile to evaluate their effect on prognosis in the presence of other known prognostic markers and therapeutic strategies, such as the hematopoietic stem-cell transplantation [26, 27]. Studies that have investigated the suitability of mutations for MRD monitoring, have shown the persistence of mutations during CR [28, 29]. However, pre-leukemic hematopoietic clones with mutations may be resistant to leukemic therapy and may lead to further clonal expansion during remission, and may eventually cause recurrent disease [30]. We have developed a qPCR method to measure the R882H DNMT3A allele burden accurately. The mutant allele burden was variable at the time of diagnosis and changed differently during CR. A recent study has shown that the R882 DNMT3A mutant allele burden determined AML prognosis [31]. Although no clear association between the persistence of mutations and clinical outcomes has been reported, a large prospective study, using a suitable method to measure mutations, will clarify the significance of the initial mutant allele burden and its change after treatment.

This study was supported by a grant from the Korea Health Technology R&D Project, the Korea Health Industry Development Institute (KHIDI), funded by the Ministry of Health & Welfare, Republic of Korea (grant no. HI18C0480) and the research fund of the Seoul St. Mary's Hospital, The Catholic University of Korea.

Fig. 3. The results of quantitative analysis of DNMT3A R882H in eight patients with acute myeloid leukemia with regard to the WHO 2016 classification. 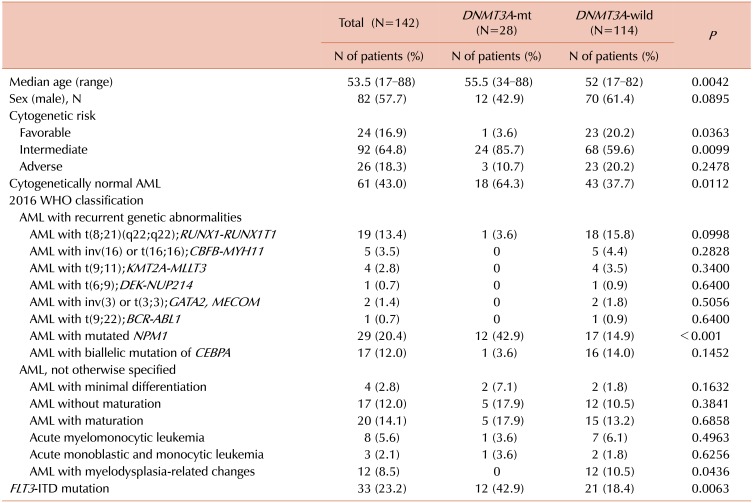 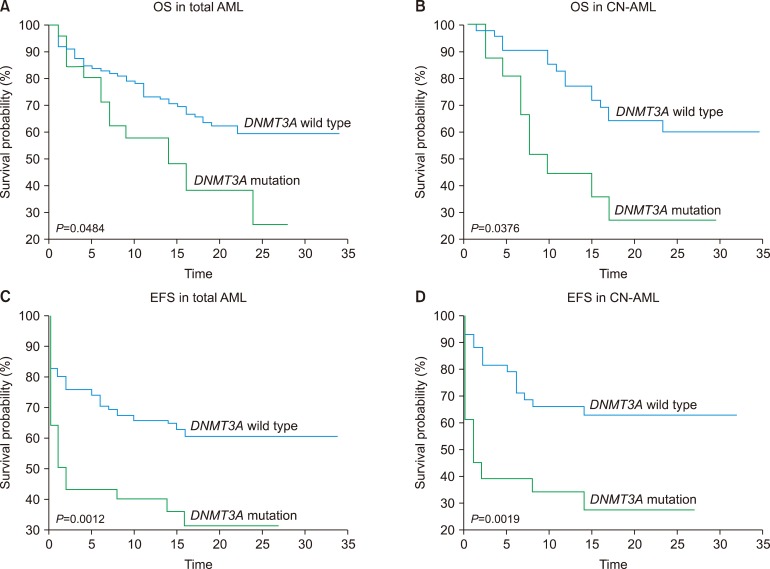