Hematopoietic stem cell transplantation (HSCT) patients need parenteral nutrition because of nausea, vomiting, and mucositis caused by conditioning regimens. The demand for glutamine increases during the HSCT period. We evaluated the effects of glutamine-containing parenteral nutrition on the clinical outcomes of HSCT patients.

In this retrospective analysis, we reviewed HSCT patients from Seoul National University from August 2013 to July 2017. Depending on their glutamine supplementation status, 91 patients were divided into 2 groups: glutamine group (N=44) and non-glutamine group (N=47). We analyzed the rate of weight change, infection (clinically/microbiologically documented), complications (duration of mucositis and neutropenia, acute graft versus host disease), and 100-days mortality in each group.

Results showed that the glutamine group had less clinically documented infection and 100-days mortality than the non-glutamine group, but the other outcomes did not show significant differences. The extended duration of glutamine supplementation according to the period of total parenteral nutrition and mucositis should be considered.

The majority of hematopoietic stem cell transplantation (HSCT) patients undergo pre-HSCT conditioning, i.e., high-dose exposure to a variety of antineoplastic drugs, often combined with radiotherapy. They are at a higher risk for undernutrition compared to general chemotherapy patients because they experience difficulty with oral ingestion due to nausea, vomiting, mucositis, and gastrointestinal dysfunction. Poor nutrition and weight loss are common contributors to cancer mortality, and parenteral nutrition (PN) is recommended when oral intake is less than 60% of the required amount of intake [123].

Glutamine is classified as a non-essential amino acid; however, increased demand for and insufficient endogenous synthesis of glutamine in stress and catabolic conditions, such as HSCT, can lead to its progressive deficiency. As a protein precursor and regulator of protein synthesis, glutamine is involved in various metabolic-biochemical processes and acts as an inter-organ nitrogen shuttle, playing an important role in rapid proliferation of immune and intestinal cells and providing various supportive functions. In particular, it is known to be involved in energy production, synthesis of amino acids, and regulation of cell cycle activity in intestinal mucosal cells [45678].

The European Society for Clinical Nutrition and Metabolism (ESPEN) and the American Society for Parenteral and Enteral Nutrition (ASPEN) guidelines state that nutrition support is recommended to HSCT patients who are at a risk of malnutrition and are unable to receive enteral nutrition and are anticipated to experience starvation for a period longer than 7 to 14 days. ESPEN and ASPEN propose that “HSCT patients may benefit from glutamine-supplemented PN” (grade B) and “pharmacologic doses of parenteral glutamine may benefit patients undergoing hematopoietic cell transplantation” (grade C), respectively [13].

Our study was conducted to evaluate the effects of glutamine-enriched PN on weight change, infection, and complication and mortality among HSCT patients.

Our study included patients aged ≥19 years, who received HSCT at the Seoul National University Bundang Hospital from August 1, 2013 to July 31, 2017. The exclusion criteria were as follows: 1) non-referral to the Nutrition Support Team (NST), 2) oral intake more than 60% of the daily caloric requirement, 3) no administration of total PN (TPN) or its discontinuation due to hepatic and/or renal failure, 4) inability to accurately assess the clinical outcome due to early death or other causes, and 5) inability to determine the response to conditioning regimens. Prior to the study, the study protocol was approved by the IRB of the Seoul National University Bundang Hospital (IRB no. B-1709-420-108). A waiver of participant consent was obtained due to the retrospective nature of our study.

Analysis was performed using the statistical software package IBW SPSS Statistics ver. 21.0 (IBM Co., Armonk, NY, USA). Comparisons between groups were made using an independent 2-sample -test and Mann-Whitney U test for continuous variables and the chi-square test and Fisher's exact test for categorical variables. Additionally, logistic regression analysis (95% confidence interval) and multiple regression analysis were performed in order to adjust for the influence of glutamine administration on the occurrence of infections and complications and the 100-day mortality. Results were considered statistically significant when the -value was less than 0.05.

A total of 286 patients aged ≥19 years underwent HSCT at the Seoul National University Bundang Hospital from August 1, 2013 to July 31, 2017. A total of 91 patients were included in our study after excluding 167 patients who were not referred to the NST, 7 patients whose oral intake exceeded 60% of the daily caloric requirements, 10 patients who were not subjected to TPN or whose TPN administration was discontinued due to hepatic and/or renal failure, 7 patients whose clinical outcomes were not clearly documented, and 4 patients whose responses to conditioning regimens could not be identified. Table 1 outlines the characteristics of the patient groups.

The glutamine and non-glutamine groups mostly showed similar characteristics; however, significant differences were observed in the conditioning regimen, especially in its intensity. The intensity of pre-HSCT conditioning depends on the type of chemotherapy. In particular, a high-intensity conditioning regimen involves high-dose alkylating agents or a combination of alkylating agents and radiotherapy to the extent that recovery is impossible without the injection of hematopoietic stem cells, resulting in a longer duration of neutropenia as compared with a reduced-intensity pre-HSCT conditioning regimen. Both groups showed no significant difference in disease status at the time of transplant. The number of patients who had complete remission (CR) or partial remission (PR) was 42 (95.5%) in the glutamine group and 42 (89.3%) in the non-glutamine group.

Our study aimed to investigate the effect of glutamine-enriched TPN on HSCT patients' body weight, infections, complications, and mortality. Our results showed that glutamine-supplemented TPN was associated with decreased rates of clinically documented infection and 100-day mortality.

Glutamine is abundantly present in the blood. Our body's requirement for glutamine increases under stress conditions. Glutamine is involved in nitrogen transfer and ammoniagenesis, and is a primary fuel source for enterocytes, hepatocytes, lymphocytes, and macrophages [5]. Enterocytes are especially sensitive to glutamine deficiency, which leads to inflammatory cytokine production and increased permeability. In a systematic review, it was reported that glutamine administration decreases mortality in critically ill patients; although animal studies have shown that glutamine supplementation reduces the degree of mucositis and bacterial translocation in the intestinal tract after chemotherapy; it remains controversial in human trials [471112].

Our results demonstrated that there was no significant difference in the calorie and protein supply between the glutamine and non-glutamine groups during the post-HSCT convalescence period. In this context, it should be noted that glutamine was not administered to the glutamine group for the entire duration of TPN (only for 7.6 out of 14.6 days). This is due to the fact that glutamine was replaced by a different protein solution to continue TPN, because health insurance coverage for the glutamine TPN solution is limited to 8 days. In non-Korean publications that study glutamine-supplemented PN regimens, the duration of glutamine TPN ranged between 7 and 28 days, and the amount administered also varied widely from 0.2 to 0.97 g/kg [12]. ESPEN guidelines recommended −0.6 g/kg as an optimal level for a glutamine-supplemented PN regimen [3]. The patients in the glutamine group of our study received 13.46 g/d glutamine for a maximum of 8 days, and it is likely that the duration of glutamine administration or the supply amount was not long or large enough to adequately evaluate the effect of glutamine.

To evaluate the frequency of infection, several risk factors, such as age, gender, high-intensity pre-HSCT conditioning, HSCT type, and response to pre-HSCT chemotherapy (recurrent or refractory, partial or complete remission) were considered. Our results showed that the glutamine group developed infections less frequently than the non-glutamine group in general, while a statistically significant decrease was observed in the frequency of clinically documented infections. Due to the difficulty in considering various long-term infection risk factors, only short-term infection frequency could be determined (during the period between HSCT and discharge). Furthermore, the glutamine group tended to have neutropenia for a longer time, presumably because of the significantly higher rate of high-intensity conditioning in this group. Our multiple regression analysis revealed that there was no significant difference between groups.

While the duration of mucositis was not significantly influenced by glutamine supplementation, patients who were exposed to high-intensity conditioning and those who received allogeneic HSCT (vs. autologous HSCT) were more likely to develop mucositis. Even when we performed subgroup analysis for allogeneic HSCT and autologous HSCT, we found no significant difference in mucositis development by supplying glutamine. Piccirillo et al. [13] reported that glutamine-enriched PN decreases the severity of mucositis in autologous HSCT patients. This group conducted 2 studies, with various amounts of glutamine supplementation. In the first study, the mucositis-related pain score decreased significantly with 20 g glutamine, whereas in the second study, a decrease was observed with 13.46 g glutamine, but it was not statistically significant. However, Kuskonmaz et al. [14] showed that mucositis rate tended to decrease, but this result was not statistically significant.

Gama Torres et al. [15] reported that glutamine PN has a positive effect on short-term mortality rate in allogeneic HSCT patients and hypothesized that glutamine might act as an immunomodulator in intestinal immune cells. A previous animal model study revealed that animals that received PN with glutamine showed higher values of intestinal IgA, anti-inflammatory cytokine interleukin (IL-4), and IL-10 compared to those that did not receive PN with glutamine. Ziegler et al. [16] reported that glutamine supplementation is associated with improved nitrogen balance, decreased rate of clinical infections, and reduced length of hospital stay in allogeneic HSCT patients. In contrast, according to the results of Pytlik et al. [17] in 40 patients, the number of days of hospital stay and the rate of positive blood cultures were shown to be increased in the glutamine-supplemented group, but without statistical significance. More recently, a Cochrane systematic review reported that glutamine supplementation is not associated with a decrease in the number of days of hospital stay, mucositis, GVHD, and ANC recovery period, but decreases the rate of positive blood cultures [218].

Our retrospective study may have contained confounding factors that influenced the clinical outcomes. However, to reduce confounding, we considered age, gender, high-intensity pre-HSCT conditioning, HSCT type, and disease status during transplant in our analysis. Because the number of patients included in the study was relatively small, we could not perform analysis according to the type of transplant (allogeneic and autologous transplant). Nevertheless, we demonstrated that glutamine PN had a significant positive influence on post-HSCT clinically documented infections and 100-day mortality. Our study is important because it is the first study in South Korea that investigates the effect of glutamine-supplemented PN on adult HSCT patients.

Tables
Table 1 Characteristics of the patients. 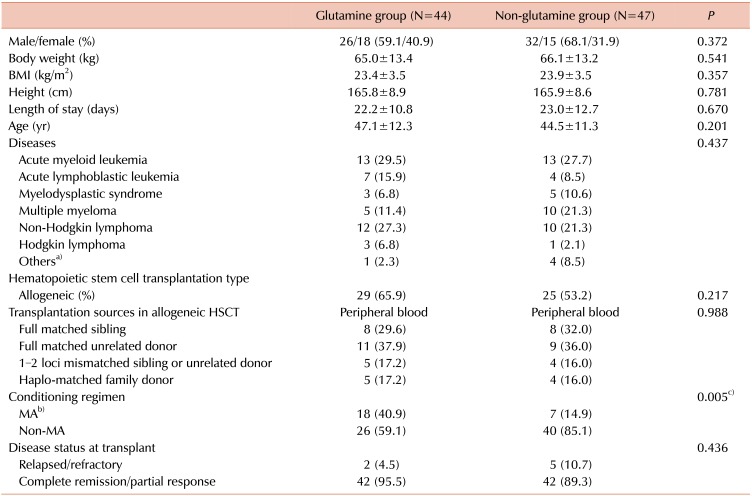 Table 2 Status of the nutritional support.