Cytomegalovirus (CMV) causes severe diseases in premature infants and immunocompromised hosts, and antiviral therapy is often required for disease control. However, the clinical manifestations and treatment courses for CMV-associated thrombocytopenia in immunocompetent children are unclear.

Medical records of the children who suffered from thrombocytopenia, and showed positive CMV polymerase chain reaction and CMV-like symptoms were retrospectively analyzed at three university hospitals in Daegu from January 2000 to March 2017. Patients suffering from leukemia, immunodeficiency, and other infections were excluded.

CMV is a rare but unique etiology of thrombocytopenia, and observed even in healthy children after the neonatal period. About one-third patients need antiviral therapy for disease control. Further, CMV-induced thrombocytopenia is more complex than CMV-related secondary ITP.

Cytomegalovirus (CMV) causes congenital infections in premature infants and severe diseases in immunosuppressed patients. In immunocompetent patients, the most common form of CMV infection is asymptomatic or benign and self-limited [123]; however, CMV infection is gaining recognition as an uncommon etiology in these patients with severe or persistent thrombocytopenia [4567]. Viruses or bacteria may cause thrombocytopenia via 2 potential mechanisms. First, through direct cytopathic effect by infecting the megakaryocytes, and second, through molecular mimicry or an immune-mediated effect. The former is called CMV-induced thrombocytopenia, while the latter is called CMV-related secondary immune thrombocytopenia (ITP) [789].

Generally, ITP is not very rare. The estimated prevalence of ITP is about 5 cases per 100,000 children [19]. Primary ITP is defined as isolated thrombocytopenia in the absence of other causes. Secondary ITP is defined as any form of thrombocytopenia other than primary, and includes systemic lupus erythematosus, infection, or lymphoproliferative disorders [19]. ITP is believed to be caused by antiplatelet autoantibodies, which potentially destroy platelets and damage megakaryocytes and/or decrease platelet production in the bone marrow [1719]. Several suggestions explaining the potential relationship between CMV infection and thrombocytopenia have been proposed [7]. These include molecular mimicry of host proteins by viral antigens [14], immune dysregulation resulting in increased platelet clearance by the reticuloendothelial system [1719], direct infection of megakaryocytes [2021], production of hematopoietic inhibitory cytokines by the CMV-infected leucocytes and stromal cells of the bone marrow [11], suppression of hematopoiesis of human progenitor cells [1], production of dysfunctional platelets, and induction of vascular diseases [7].

In several cases of CMV-associated thrombocytopenia, thrombocytopenia resolves after the first choice, IVIG [1012]. This suggests a general hypothesis for childhood ITP after viral infections or vaccination. CMV can directly infect megakaryocytes in the bone marrow, thereby decreasing platelet production [2021]. This seems to be the best explanation for some patients who are refractory to conventional ITP therapies, including the use of IVIG and steroids, and who are subsequently treated with antiviral therapy [467]. CMV also causes the megakaryocytes to produce dysfunctional platelets and evokes vasculopathy, which induces severe bleeding symptoms, such as ICH, despite a relatively high platelet count compared to that in the general ITP patients [7]. In our study, 2 children belonging to the CMV-induced thrombocytopenia group (patients 6 and 7 in Table 2) also showed bleeding and their platelet count was 80,000–90,000/µL.

CMV infection shows vertical transmission from mothers to infants via perinatal infection (due to intrapartum transfer) or infected breast milk [22]. Upon infection, the virus remains dormant within the body for a long time. Severe impairment of the immune system or certain diseases reactivate CMV from its latent state. CMV is shed in the body fluids and can be found in the urine, blood, saliva, vaginal fluid, semen, tear, breast milk, and stool samples [22]. Close contact with an infected person, such as in group care settings, neonatal intensive care units, or crowded domestic environments, sometimes causes secondary or community-acquired infections [2324]. Congenital CMV infection is diagnosed by isolating the virus from infants within the first 3 weeks of their birth. After three weeks, it becomes difficult to differentiate whether CMV infection was acquired congenitally or perinatally in infants, unless clinical features of the former such as chorioretinitis, intracranial calcification, microcephaly, and hearing loss are present [22]. In this study, 18 CMV-associated thrombocytopenia patients were less than 6 months old and were never exposed to a day care center. Thus, we hypothesize that CMV infection may be perinatal or transmitted via breast feeding. The remaining 11 patients, who were more than 6 months old and were exposed to day care centers, were considered to have community-acquired secondary infection.

The incidence rate of primary CMV infection is 0.2–2.4% of all live births [22]. After the neonatal period, the incidence of CMV infection varies according to race, economic status, and environmental factors. One study showed that one-third of Pakistani children had CMV infection by the age of 12 months, compared to only 9% of white British children [25]. In another study, most preschool children (>90%) in South America, East Asia, and India were CMV seropositive, in contrast, seroepidemiologic surveys in Great Britain and in USA have found that less than 20% of children of similar age were seropositive [26]. By National Health and Nutrition Examination Survey, 1988–2004 showed that the overall age-adjusted CMV seroprevalence in the USA was about 50% [26]. When analyzing the distribution of CMV IgG positive individuals by age, around 65% of children were shown to have antibodies, and then increased with age, reaching 80% in the 30s and >90% in the 60s [27]. According to the one study about thrombocytopenia patients, 11% children and 4% adults being treated for the management of thrombocytopenia had CMV-positive urine samples [728]. However, in Korea, the current epidemiology of CMV-infected children or proportion of CMV-positive immunocompetent children having thrombocytopenia is not clear. We suggest the frequency/prevalence of CMV-associated thrombocytopenia in this study (2.7%) was underestimated. Because not every thrombocytopenia children tested for CMV PCR, and we only selected the patients with CMV PCR positivity in this study.

Several diagnostic methods for detecting CMV infection are available. Serological tests for detecting the CMV IgM and IgG antibodies are commonly used; however, these tests have some limitations [29]. CMV infection cannot be completely ruled out based on negative CMV IgM test results because the antibody reaction differs between individuals and during the second serological test performed, 2 to 7 days later, seroconversion can occur. Considering the duration for seroconversion, measurement of CMV IgG in samples collected 1 to 3 months apart can be used for diagnosing primary infection. Further, in infants, a positive CMV IgG test potentially reflects transplacentally-acquired maternal antibodies which can persist up to 18 months of age [2230]. Therefore, serological testing has limitations for the early diagnosis of CMV. Qualitative PCR is also used for detecting CMV DNA in blood and tissue samples and is more sensitive than serological tests. However, it is difficult to differentiate latent infection from apparent infection by qualitative PCR, which has low specificity and low-positive predictive rates [29]. On the other hand, quantitation of CMV DNA by real-time PCR, at the exponential phase of viral growth, is fast and accurate. Thus, it is a good diagnostic tool for early diagnosis of CMV infection for initiating timely treatment [29]. Recent studies, including the present study, are using CMV PCR to confirm CMV infection [6713].

Childhood ITP is usually acute, with a recovery rate exceeding 70% [1617]. If ITP persists, it typically responds to ITP-specific therapies, such as IVIG or corticosteroids. IVIG increases the platelet count in more than 80% children [18]. Corticosteroids are also effective and about 75% patients respond to this therapy, although the response is highly dose-dependent [18]. In case of secondary ITP, due to human immunodeficiency virus, , or hepatitis C virus, optimum management requires control of the underlying infection. IVIG is also effective in increasing platelet counts in such cases; however, in some cases, the responses are transient. This is because IVIG only blocks the destruction of platelets, but cannot eradicate the pathogen or increase the production of platelets from the bone marrow. Thus, sometimes, control of the underlying infection is important, following which, standard ITP therapies regain their efficacy [6]. However, exact guidelines for treating CMV-associated thrombocytopenia in immunocompetent hosts, particularly the necessity of antiviral therapy, are unavailable. This is because, in many cases, CMV does not cause severe infections in immunocompetent people [45121428].

In the present study, the prognosis of CMV-associated thrombocytopenia in immunocompetent children was favorable and thrombocytopenia was resolved in all cases. However, in these children, other aspects, such as neuromotor developmental delay, epilepsy, hearing loss, and growth retardation, can coexist along with CMV infection [1015]. The aforementioned points are the limitations of this study. Neurological imaging, and audiometry and neurodevelopmental evaluations were not performed for all patients. The patients diagnosed with CMV-associated thrombocytopenia should also receive thorough neurological and developmental examinations by clinicians [1015].

The baseline characteristics of 29 CMV-associated thrombocytopenia children after neonatal period. 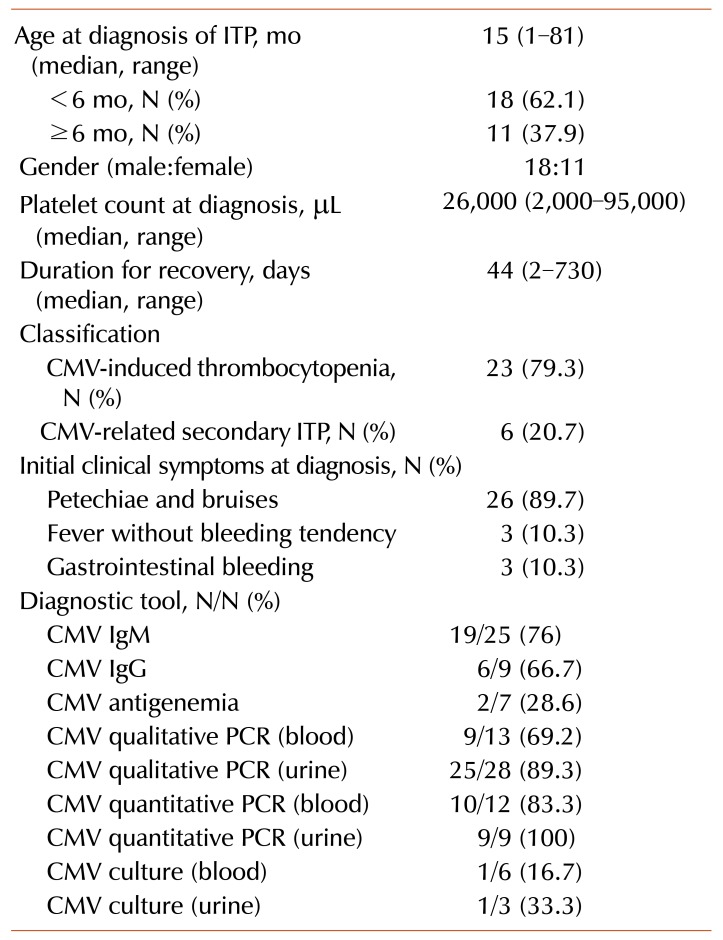 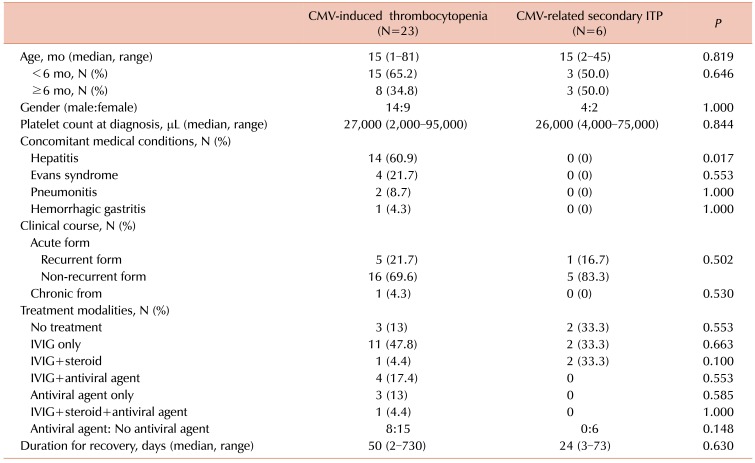