The whole blood (WB) and apheresis plasma donations are generally well tolerated but they are not completely without risk. While the majority of complications are mild and self-limiting, they can cause significant donor discomfort and negative impact on donor satisfaction and return rates [1]. Vasovagal reactions (VVRs) are among the most common complications of WB and apheresis plasma donations. VVRs result from reduced cerebral perfusion and may be triggered by unpleasant or painful stimuli during the donation process, including the sight of blood, lack of sleep, dehydration, hypovolemia and hunger. Recent estimates for donor VVR rates range from 0.01–12.5% for WB donations [2, 3, 4] and 0.16-4.17% for apheresis collections [5, 6]. Studies comparing VVR rates between WB and apheresis plasma donations have reported conflicting results: Crocco et al. found similar VVR rates between WB donors (0.19%) and apheresis plasma donors (0.16%), while Burkhardt et al. reported lower rates of circulatory associated events (0.30%) in WB donors compared to apheresis plasma donors (0.49%) [3, 5]. There is strong evidence for association between higher VVR rates and first-time donor status, younger age, lower weight, and female gender [7, 8, 9, 10]. The level of evidence for other etiological factors, such as pre-donation anxiety, low blood pressure, collection volume, menstrual status, history of VVRs, longer waiting time, time since last meal, temperature/season, donor fatigue, donation site, duration of phlebotomy and staff interpersonal/technical skill is weak to moderate [11, 12, 13, 14]. The aim of this retrospective registry-based study was to determine the factors related to VVRs in a Danish cohort of WB and apheresis plasma donors.

Volunteer donors fulfilling current Danish eligibility criteria underwent WB and/or plasmapheresis donations at the main hospital donor site, while whole blood donations were also collected at a five-bed satellite facility of the hospital. Pre-donation vital signs were recorded by the same donor center staff, who supervised plasma and WB donations at both sites. Apheresis plasma donations were collected using the PCS2 plasma collection system (Haemonetics Corporation, Braintree, MA, USA); 700 mL of plasma were collected if the donor's body weight was greater than 70 kg and 600 mL if the weight was between 60–70 kg. The minimum body weight for WB donors was 50 kg. Donor demographics, details of the collection procedure and complications related to the collection procedure from January 2, 2014 to August 10, 2016 at the Odense University Hospital were reviewed from the donation database (ProSang, Databyran AB, Stockholm, Sweden). Tests of normality were performed for continuous variables and the appropriate descriptive statistics were calculated. The Chi-squared test was used to compare the differences between dichotomous variables, a Wilcoxon rank-sum test was used to compare the mean rank between groups for non-normally distributed continuous variables and a two-sample test of proportions was used to compare re-donation rates amongst donors with or without the experience of VVR. A multivariate logistic regression, clustered by unique donor, was performed using VVRs as the dependent variable and age group, gender, donation type, donation site, donation number, season and donation volume as independent variables (Stata version 14, StataCorp, TX, USA).

In terms of environmental factors, the VVR rate for WB donations was low but was significantly higher at the satellite facility compared to the main hospital site (0.57% vs. 0.30%, =0.003), possibly due to temperature, ventilation or phlebotomy space or characteristics of the donors who visited this site. There was also a trend towards higher VVR rates for both WB and apheresis plasma donations during the summer versus other seasons combined, but this did not reach statistical significance likely due to the low number of events (Table 1).

The analysis performed in this study was limited to the variables captured in the donation registry, and as such, the inability to account for the effect of factors such as donor weight, ethnicity, first-time donation status, history of VVRs, waiting time, time since last meal and pre-donation psychometric variables is potentially a limitation. Additionally, not all of the donation-related parameters were available for all the donations included in the study. Nonetheless, this study confirms the findings of prior studies that younger age and female gender are associated with a higher rate of VVR, regardless of the donation type. The majority of VVRs occurred on the first documented donation in the study period and there was a significantly lower redonation rate after a VVR event for both WB and apheresis plasma donors. The unexpected finding of a higher VVR rate associated with an apheresis donation volume of 550–650 mL versus 650–750 mL is likely because the volume collected for apheresis donations was based on donor weight and donors with lower weight have a higher reported rate of VVRs, and/or that the occurrence of a VVR caused the premature termination of the collection [15]. These findings highlight the importance of identifying risk factors for donor VVRs in order to take steps to mitigate these reactions and thereby encourage re- donations. Donors identified to be at risk of VVR should be monitored more closely in order to improve the donor experience. Donor hemovigilance registries should collect data on additional parameters potentially associated with VVRs.

Demographics and donor parameters related to all donations with and without VVR. 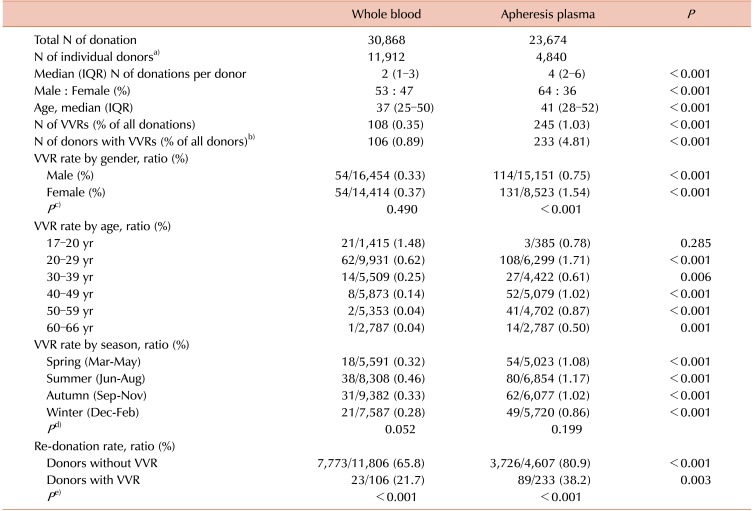 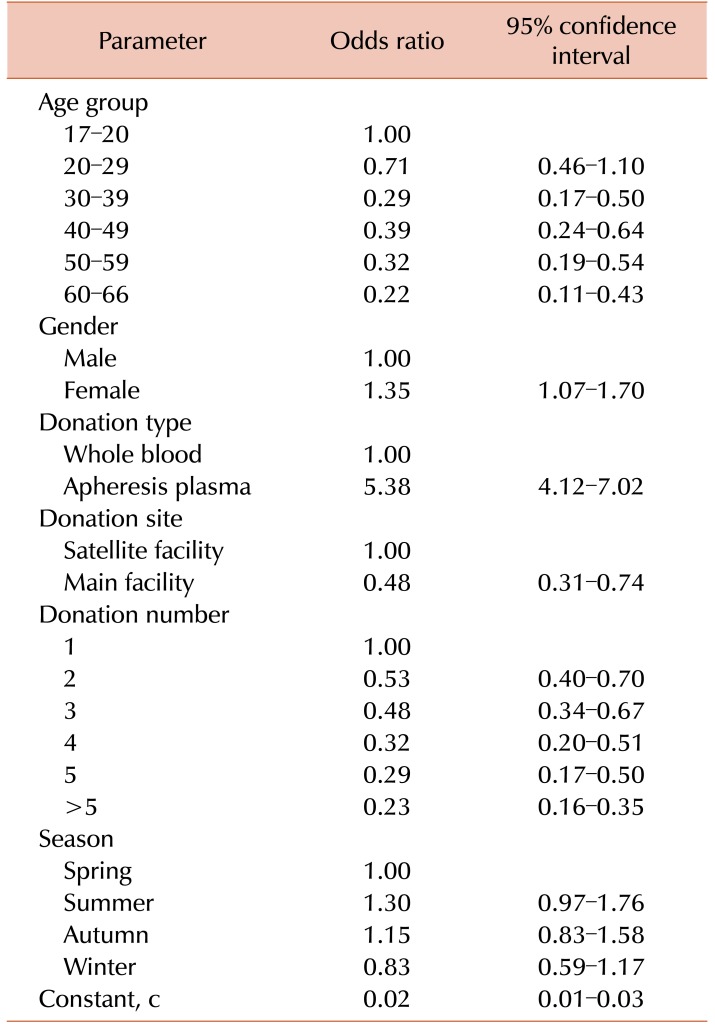