infection (CDI) is a nosocomial condition prevalent in patients with hematological disorders. We aimed to identify the risk factors associated with the development of CDI and assess the mortality rate at 15 and 30 days among hematologic patients admitted to a tertiary care center.

We conducted a retrospective case-control study from January 2010 to December 2015. Forty-two patients with hematologic malignancy and CDI, and 84 with hematologic disease and without history of CDI were included in the case and control groups, respectively.

The risk factors for developing CDI were exposure to therapeutic antibiotics and previous hospitalization. Hematological patients who developed CDI had higher early mortality rates, suggesting that new approaches for prevention and treatment are needed.

(CD) is an anaerobic, Gram-positive, spore-forming bacillus capable of colonizing and proliferating in the human intestinal epithelium [1]. CD strains that produce toxins A and B appear to play a major role in the occurrence of clinical manifestations. CD infection (CDI) may manifest in a wide range of symptoms, from an asymptomatic carrier and mild diarrhea to the development of pseudomembranous colitis [1234]. In western countries, an incidence of 2–6 cases per 10,000 hospitalized patients per day has been reported, with CD regarded as the main cause of nosocomial infections [123]. In the Latin American population, a multicenter study reported a rate of 11 per 10,000 hospitalized patients over 40 years of age per day [5]; in Mexico, rates of 2.8 CD cases per 10,000 hospitalized patients a day and 1.5 cases per 1,000 admissions have been reported [6].

Antibiotic use is considered as the risk factor that is most likely associated with CDI, particularly the use of clindamycin and fluoroquinolones [1234]. Other variables that have been described as risk factors in the general population include previous hospitalizations [37], age >65 years [7], inflammatory bowel disease [8], nasogastric tube feeding [9], GI surgery [9], obesity [89], antineoplastic therapy [89], hematopoietic stem cells transplantation (HSCT) [89], use of gastric-acid suppressing drugs [89], and admission to the ICU [9]. At the microbiological level, infection caused specifically by the NAP1/BI/027 CD ribotype strain has been associated with a higher incidence of severity and recurrence in some populations [18910].

Patients with hematological diseases are at higher risk of developing CDI, partly because they undergo intensive chemotherapy (CT) and/or bone marrow failure that can lead to immunosuppression [11]. In addition, many patients require prolonged hospitalizations and are exposed to multiple drugs, including broad-spectrum antibiotics [1112]. Different research groups have reported higher incidence rates of CDI among hematological patients in comparison to other patient groups [13141516171819].

CDI has become a major concern for physicians and health systems due to its increasing morbidity and mortality. In Latin America, little is known about the risk factors associated with the development of CDI in patients with hematological disorders. Therefore, the study aimed to identify the risk factors associated with its development and assess the mortality rate at 15 and 30 days among Latin American hematologic patients admitted in a tertiary care center.

Approximately 50% (N=21) of CDI episodes were classified as having severe-complicated infections, with 23.8% (N=10) associated with hemodynamic instability. The first-line antibiotic treatment was oral (PO) metronidazole in 29% (N=12), intravenous (IV) metronidazole in 29% (N=12), PO vancomycin in 17% (N=7), and IV metronidazole plus PO vancomycin in 26% (N=11). Overall, 9.5% (N=4) of the patients required surgical intervention due to toxic megacolon. CD ribotype 027 was present in 16.7% (N=7) of patients but was not associated with worse clinical outcomes.

In this case-control study, we found that the risk factors related to the development of CDI in our patients with hematological diseases did not differ from those reported in the studies conducted in other populations [12347]. Considering the existing knowledge on the pathogenesis of CDI, which involves exogenous acquisition from the transmission of bacterial spores, the associations identified among our study variables can be substantiated.

Previous hospitalization is a risk factor for the acquisition of CDI, and the probability of developing this pathology is directly proportional to the length of hospital stay, with reported acquisition rates of up to 50% in patients hospitalized for more than 4 weeks [127]. Additionally, CDI is an indicator of medical care quality as its development can double hospitalization time and/or the number of hospital admissions per patient in the population affected by hematologic neoplasms [1528].

Previous use of any type of antibiotic is one of the main factors associated with the development of CDI in hematological patients [929]. As the patients are exposed to intensive CT and many infectious processes, they exhibit a greater susceptibility to CDI development [1314161828]. Notably, no previous study carried out in the hematological population has separately analyzed the association between prophylactic and therapeutic antibiotic use and development of CDI. In our study, the use of therapeutic antibiotics and prophylactic antibiotics in the last 3 months had statistically significant associations with CDI in the univariate analysis, and therapeutic antibiotic use remained statistically significant in the multivariate analysis. Unlike previously reported data, antimicrobials including penicillin, cephalosporin, vancomycin, and carbapenem were shown to be independent risk factors based on the statistically significant associations with CDI in the univariate analysis. On the contrary, Gweon et al. [14] found that the total number of antibiotics used and their duration of use were greater in patients with hematological diseases who developed CDI compared with non-hematological patients, adding greater external validity to the previously proposed hypothesis. Similarly, decrease exposure to antimicrobial agents was associated with a higher rate of CDI resolution [14].

Fuereder et al. [29] reported their results on the risk for CDI in a cohort of patients with hematological and oncologic malignancies. Consistent with our results, they found that the use of antimicrobial agents within the previous month was an independent risk factor, whereas the use of CT was not related to the development of CDI. However, the population included was widely heterogeneous in terms of chemotherapeutic regimens used, with different myelotoxicity and gastrointestinal toxicity potential.

Compared with the results of previous studies, half of the CDI cases in our study experienced severe-complicated episodes and higher rates of complications [1416]. Interestingly, in our study group, the mortality rate attributed to CDI was similar to that reported in the literature (2.4%), being the higher mortality rate attributed to other concomitant infectious complications [1416182630]. Our explanation to this finding is based on the hypothesis that our study population has a higher risk of developing infectious complications because of the advance stage of disease at diagnosis, and that the first-line treatment for CDI episodes was PO metronidazole (according to the 2010 recommendations of the IDSA) [10]. However, the current recommendation for first-line treatment is PO vancomycin or fidaxomicin, and PO metronidazole is used as treatment for mild-moderate episodes [31].

The prevalence of mortality at 30 days ranged between 16% and 33% in other studies, while that in our study was 14.3% [14192429]. In those studies, the specific cause of death in one patient was attributed only to the CDI episode (0.7%), and the rest of the patients died with an active CDI caused by other factors [1426]. Among the reported deaths related to the CDI episode (N=3), only one case was directly attributed to this event (2.4%); the other patients had bacteremia due to infection with and , and the last patient had soft tissue infection, bacteremia, and nosocomial pneumonia (4.8%).

Although the main limitation of this study is its retrospective nature, it provides relevant evidence suggesting that hematological patients are highly susceptible to not only CDI but also to the development of complications arising from this infection and/or concomitant complications that can directly impact early mortality rates [131416]. Therefore, a higher proportion of recurrence and mortality was difficult to assess over a longer period of time. Although the mortality rate was higher in patients with CDI than in controls, we did not find a statistically significant association because of the sample size.

The main strength of this study is that we were able to explore new variables that have not been previously studied, such as febrile neutropenia. Additionally, we separately analyzed those patients treated with prophylactic antibiotics from those receiving therapeutic antibiotics; both factors are important in the context of a hematologic patient receiving CT with an increased risk of infections and with a statistically significant association with CDI.

New prospective studies that will analyze the variables found and with longer follow-ups in hematologic patients who developed CDI are necessary to demonstrate a causal association between risk factors and CDI and can propose new approaches for prevention and treatment.

Overall survival of cases and controls at 15 and 30 days. 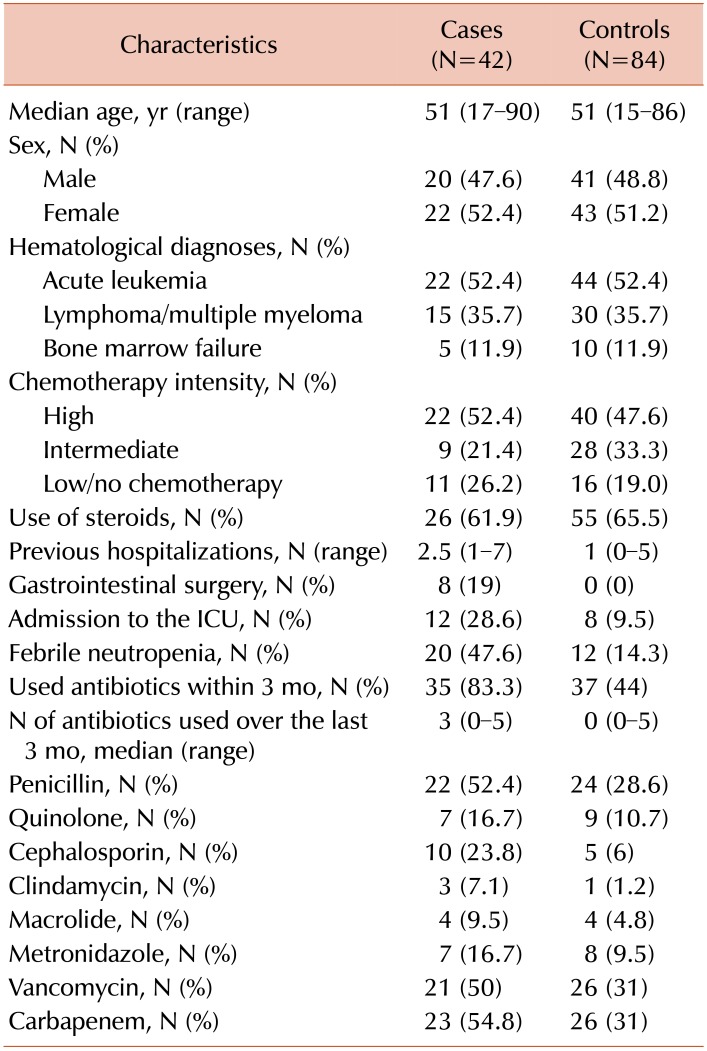 Table 2 Univariate analysis of the risk factors associated with the development of CDI in patients with hematological diseases. 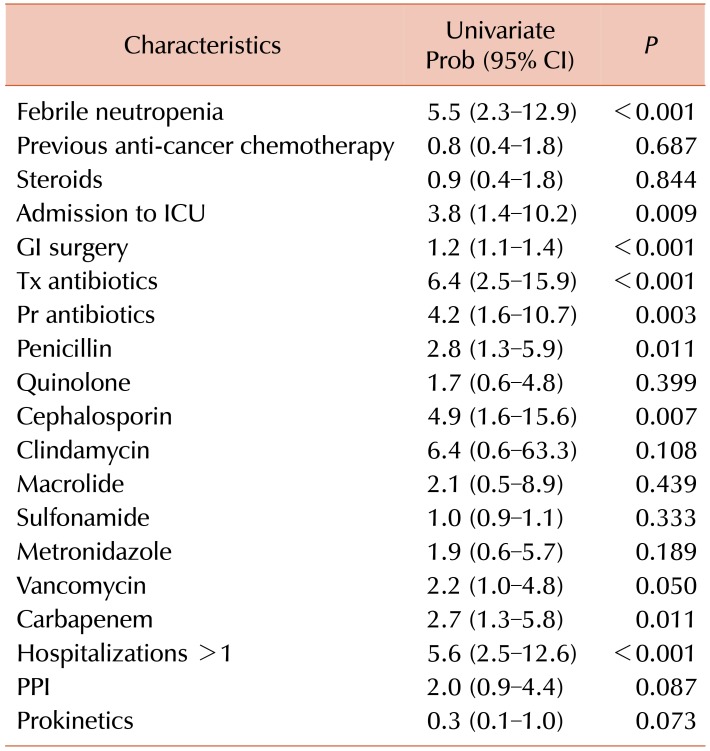