TO THE EDITOR: Philadelphia-positive (Ph+) B cell acute lymphoblastic leukemia (B-ALL) comprises about 20–30% of all adult ALL cases [1]. The outcome of these patients is improving with time, and the clinical use of tyrosine kinase inhibitors (TKIs) has contributed a great deal to this improvement. First-generation TKIs, such as imatinib, and subsequent-generation TKIs (second-generation, e.g., dasatinib, and third-generation, e.g., ponatinib) have improved the outcomes compared to historical cohorts with no randomized controlled trials available to guide us on selecting the optimal choice of a TKI [2-4]. Despite that, relapse and refractory disease are common and remain issues in the management of disease. Here, we present the case of a young woman with multiple relapses who posed to be a treatment challenge.

A 20-year-old woman presented with prolonged fever and constitutional symptoms (weight loss and poor appetite) for 1 month. Clinical examination revealed a mildly enlarged spleen and cervical lymph nodes with no other significant findings. Her initial blood investigations showed bicytopenia with a white cell count of 5.8×109/L, hemoglobin of 8.5 g/dL, and platelet count of 61×109/L. Subsequent bone marrow examination revealed a hypercellular marrow with 90% lymphoblast infiltration. Flow cytometry showed a common B phenotype with positivity for CD34, CD19, and CD10 and aberrant expression of CD13 and CD33. Molecular studies revealed a minor transcript (p190) of the breakpoint cluster region-Abelson (BCR-ABL) with corresponding cytogenetics of 46XX and translocation (9;22). There was no central nervous system (CNS) involvement upon evaluation of the cerebrospinal fluid (CSF).

She underwent induction chemotherapy using a modified German Multicenter Acute Lymphoblastic Leukemia (GMALL) protocol and was subsequently treated with a hyperfractionated cyclophosphamide, vincristine, doxorubicin, and dexamethasone (Hyper-CVAD) regimen. Imatinib, 600 mg daily, was added following the detection of the Ph+ immunophenotype from molecular studies on day 21 of induction, and she achieved minimal residual disease (MRD) negativity throughout her treatment course. Intrathecal methotrexate and cytarabine (14 doses in total) were administered as CNS prophylaxis. She was then subjected to a fully matched male-sibling hematopoietic stem cell transplant (HSCT) with total body irradiation (TBI)-cyclophosphamide (Cy) conditioning 5 months after her initial diagnosis. At post-transplantation, she exhibited no graft-versus-host disease (GVHD) manifestations and achieved full donor chimerism. She remained in molecular remission while on maintenance therapy with imatinib but was stopped after 2 years due to poor compliance.

At 6 months after the cessation of imatinib, the patient’s disease relapsed with the same immunophenotype at the initial diagnosis. The bone marrow aspirate showed 49.8% lymphoblasts on flow cytometry with no evidence of CNS infiltration (Fig. 1). No ABL mutation studies were performed. Given the limited availability of TKIs and prior exposure to imatinib, nilotinib 400 mg twice daily plus dexamethasone was started. She subsequently had compassionate access to allogenic (same donor as that in the first transplantation) 4-1BB-expressing CD19 chimeric antigen receptor T (CART) cell therapy with no cytokine release syndrome (CRS) complications. After therapy, the patient was maintained on 400 mg nilotinib twice daily and managed to achieve molecular remission on bone marrow assessments at 3 and 6 months. 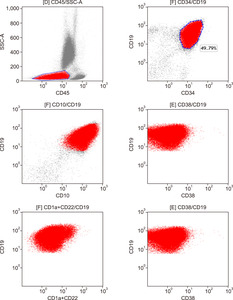 She had a second relapse while on nilotinib, 8 months after the CART therapy, with 13% of CD19-positive lymphoblasts noted in the reassessment of her bone marrow. She was treated with a fludarabine, cytarabine, and irubicin (FLA-Ida) regimen and achieved remission with MRD negativity. To render her into deeper remission status, she was initially administared ponatinib 30 mg daily, intravenous vincristine, and dexamethasone. The patient’s disease was maintained in molecular remission following two treatment cycles. She underwent a second allogeneic HSCT with reduced-intensity conditioning (RIC) from the same donor, as she had no other options for a different donor. At the 6-month post-transplantation follow-up, her bone marrow assessment demonstrated full donor chimerism, and she remained in molecular remission while taking ponatinib. Unfortunately, 9 months after the second allogeneic HSCT, she presented with a headache, and CSF evaluation revealed relapsed disease in the CNS with no evidence of disease in the bone marrow. Unfortunately, the patient succumbed and died shortly thereafter. The details of the treatment are summarized in Table 1.

Summary of the treatments.

With chemotherapy alone, patients with Ph+ ALL have a poor prognosis and exhibit a high relapse rate within months, and they also have poor post-treatment survival rates. Allogeneic/autologous HSCT provides better results than chemotherapy, but the relapse rates remain high [5]. The incorporation of TKIs into the treatment regimen has resulted in superior response rates and the eradication of residual disease, thereby allowing more patients to undergo HSCT with improved long-term outcomes [2].

Trials on various types and intensities of chemotherapy regimens have been evaluated and demonstrated efficacy, with the GRAAPH-2005 study being the first to compare a low-intensity approach (vincristine and dexamethasone) with a high-intensity approach (hyper-CVAD in addition to imatinib) [6]. The lower-intensity approach was associated with lower mortality rates, it was associated with higher or comparable remission and survival rates. More recently, treatment approaches have been directed towards chemotherapy-free TKI therapies and monoclonal antibodies with excellent outcomes [7]. Our patient was treated with high-intensity chemotherapy at the initial diagnosis, with the lower intensity being considered at the time of the second relapse following the results of this study. However, considering the treatment administered in a relapsed setting, previous exposure to imatinib and nilotinib, with the possibility of T315I mutation, ponatinib was added to this low-intensity backbone.

Several treatment options are available in for those in a relapsed or refractory condition. Immunotherapies directed at CD19 (e.g., CART and blinatumomab) and CD22 (e.g., inotuzumab and ozogamicin) have shown response efficacy in relapsed Ph+ ALL [8-10]. Chemotherapy (e.g., cytarabine-based) regimens are commonly employed with poor long-term results, particularly in those without transplantation as an option [11]. Furthermore, in these salvage therapies, disease relapse remains a challenge. Therefore, these therapies should be used as a bridge to HSCT following the achievement of remission or results of MRD negativity. In this case, the choice of TKI was guided by its availability and previous usage in earlier treatment. To date, the best approach in maintenance therapy (preemptive versus prophylaxis) should be individualized, and the treatment duration required to maintain disease remission needs further clarification from ongoing clinical trials [12]. It remains unclear which TKI is preferred for those with a relapsed/refractory condition due to there being limited comparison studies between TKIs, except for specific BCR-ABL mutations.

We report our case as a demonstration that disease relapse is still a complication frequently encountered in Ph+ ALL despite achieving deep molecular remission. Salvage therapies, including immunotherapy, may be promising in terms of the response, but further consolidation with HSCT needs to be analyzed because of the high relapse rates. Newer-generation TKIs with increased potency should be considered as adjuncts for rendering patients in molecular remission as a bridge to allogeneic HSCT.