TO THE EDITOR: Alterations of the tumor suppressor gene are frequent in Diffuse Large B-cell Lymphoma (DLBCL), the most commonly diagnosed blood cancer at over 30,000 diagnoses per year, and are associated with poor prognosis [1]. DLBCL has traditionally been divided into three cell of origin (COO) subcategories based on RNA expression profiles or IHC: Activated B-cell (ABC), Germinal Center B-cell (GCB), and Unclassified cases [2]. Patients with ABC tumors are characterized by a more aggressive profile alongside active NF-κB and BCR signaling pathways, while GCB cases are associated with alterations that drive aberrant chromatin-modification, PI3K signaling, and the upregulation and through structural variants [3]. Both subtypes are associated with worse outcomes if impaired is present, although these alterations do not enrich in one subtype vs. the other [1]. Recently, new classification models have utilized previously-identified DLBCL driver DNA alterations to categorize de-novo tumors into subsets [4-7]. All 3 models, supervised or unsupervised, produce a GCB-like classification: EZB (Schmitz/Wright), BCL2 (Lacy), and C3 (Chapuy). These tumors are defined by alterations significantly enriched in aggressive cases of GCB DLBCL: (mutation or translocation), , and .

Although EZB tumors have an overall favorable prognosis when treated with frontline RCHOP regimens, DLBCL patients that refract therapy or later relapse face a dismal outlook, with only 20% predicted to survive after 5 years, and few studies have examined the molecular landscape of relapsed or refractory DLBCL (rrDLBCL) [8]. The 2019 analysis by Rushton and colleagues analyzed the largest single rrDLBCL cohort, identifying several emergent genetic differences between rrDLBCL and de-novo tumor populations [9]. Importantly, the landmark FDA approval of Chimeric Antigen T-cell (CAR-T) therapy makes characterizing the genomic landscape of rrDLBCL a priority. Herein, we present data supporting that increased alterations in rrDLBCL are enriched towards GCB-like subclassified cases, such as EZB, and co-associate with related DNA alterations significantly more than they do in de-novo populations.

DNA-sequencing data from the Rushton rrDLBCL analysis (N=127) and 3 de-novo analyses were assembled (N=2,128) [4, 5, 7, 9]. These alterations designated COO via standard gene expression panels, Nanostring, the Hans algorithm, or a combination. Cases within each population were DNA-alteration classified by their respective methods or relied on the LymphGen algorithm. DNA Alterations present in less than 5 cases and patients with less than 2 alterations were filtered out. De-novo patients were filtered out of survival analyses if they were not treated with RCHOP or arose from transformation. DNA alterations included missense, deletion, frameshift, high-impact splice, and truncations. A GCB rrDLBCL validation cohort combining results from four sequencing studies was also assembled (N=54) [10-13]. The rrDLBCL population was analyzed using the Broad Institute’s GenePattern Non-negative Matrix Factorization (NMF) module with assigned cluster values up to 8 [14]. Two groups emerged from this analysis – designated RR1 and RR2. FDR-corrected Marker Selection was applied to uncover differential presence of DNA alterations, with values <0.05 considered significant. Pearson distance and similarity analyses to alterations were performed using the Morpheus tool. 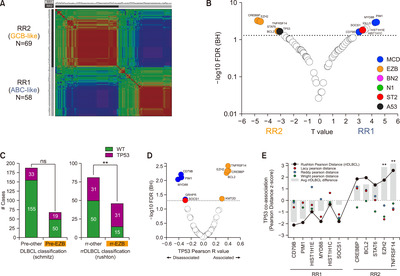 Figure 1. TP53 alterations enrich within GCB-like DNA subclassification alterations and rrDLBCL patients compared to de-novo cohorts. (A) K2 (2-cluster) NMF clustering. rrDLBCL patients (N=127) were analyzed for the best fit when measuring the association patterns of DNA alterations (N=91). Patient similarity is designated by color, with red representing the most co-association and blue the least. The RR1 and RR2 subsets that emerged from clustering are designated by light grey and dark grey coloring, respectively. (B) A volcano plot displays differentially enriched DNA alterations between RR1 and RR2. Comparative marker selection between the groups resulted in 2-sided T and FDR values. Greater T values were associated with RR1 and lesser values with RR2. The dotted line represents the 0.05 FDR threshold to be met for significant association with one family over the other. Significant alterations are color coded for their corresponding LymphGen cluster, if designated. (C) TP53 alterations are significantly enriched towards EZB tumors in rrDLBCL but not in de-novo DLBCL. Stacked bar graphs denote the presence of TP53 alterations within EZB and non-EZB tumors. The pre-treatment Schmitz et al. 2018 [3] cohort is compared to the Rushton et al. [9] rrDLBCL cohort. Significance was determined with a Fisher’s Exact test within both groups. (D) TP53 Alterations significantly co-occur with EZB alterations and significantly occlude MCD alterations. A volcano plot displays TP53 Pearson distance for measured rrDLBCL genes. FDR-corrected correlation similarity values are plotted on the Y-axis, with FDR <0.05 noted with a dotted line. Genes are labelled and noted for LymphGen subclassification. (E) RR2 driver genes increased association with TP53 alterations in comparison to pre-treatment association measurements. Z-score normalized Pearson Distance values are plotted on the Y-axis against RR1 and RR2 genes on the X-axis. rrDLBCL associations (Rushton) are compared to 3 separate de-novo cohort values (Lacy, Reddy, and Wright) based on TP53 co-association. Two-way ANOVA analysis was used to measure significance between pre-treatment and rrDLBCL values after Bonferroni multiple comparison correction.

We next isolated EZB-associated genes to compare -impairment differences between de-novo analyses and rrDLBCL cases. Collective EZB Z-score association with alterations was significantly greater in the rrDLBCL cohort compared to de-novo cohorts (=0.0166) (Fig. 2A). co-associations were next compared across all LymphGen-subsets. EZB genes harbored a significantly greater co-association than genes associated with the MCD (=0.0026), BN2, (=0.0237) or unclassified (=0.0017) classifications in rrDLBCL (Fig. 2B). This significant trend was observed once more within a second population of rrDLBCL patients (N=44) (Fig. 2C) [10]. We added cases to this rrDLBCL validation population, integrating Greenawalt, Morin (N=25), Juskevicius (N=21), and Jain (N=24) (Supplementary Table 6) [10-13]. Significant enrichment of alterations within GCB cases were noted for both rrDLBCL populations (Fig. 2D, Supplementary Fig. 8). As a final measure of -impariment’s role driving refractory cases of GCB-like subclassified tumors, Kaplan-Meier survival analyses revealed significantly inferior patient survival within both when alterations are present before RCHOP treatment (Fig. 2E). These data inform that the detrimental role of impairment at diagnosis rises within GCB-related subclassifications of rrDLBCL. 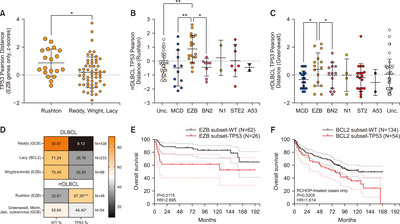 Impairment of the tumor suppressor is one of most negative prognostic indicators of DLBCL, strongly associating with inferior survival and aggressive disease biology. However, DLBCL is a heterogenous disease, often the result of cumulative epistatic genetic alterations instead of a single driver. Further, recent studies have identified associated sets of genetic alterations that co-segregate into distinctive subsets, supplementing traditional disease gene expression models [4-7]. Importantly, alterations have not found a consensus position among these subclassifications.

When focusing rrDLBCL tumors, we identified that alterations of enrich towards GCB-like subclassifications (EZB/C3/BCL2) compared to frequencies observed in de-novo populations, significantly co-occurring with EZB-classified genes as well. Our analysis relied on established, unbiased methods of clustering: the Broad Institute’s NMF tool, notably responsible for the Chapuy 2018 analysis that led to the C1-C5 subsets [6]. A disadvantage is that certain cases will not find a strong consensus when few alterations are present, but we preferred an unbiased approach in favor of seed-based models. We hypothesize that impairment may be selected for after RCHOP treatment in a portion of EZB/corresponding cases that otherwise would not be able to reject therapy, joining rrDLBCL cases that originally presented with impaired at diagnosis. Similarly, was among the genes strongly associated with TP53 impairment in our analysis, and the Reddy analysis designated GCB+ cases as one of their low-risk classifications, indicating that a robust loss of tumor suppression may be necessary to observe progression [4]. Similarly, strong co-associations and enrichment between and alterations may hint at cooperation between the resulting pathways during transition.

Future studies should address specific caveats encountered in our report. To begin, validation among additional rrDLBCL patient cohorts remains an important follow up for supporting these results. Equally, the lack of CNA data may preclude these cases forming their own A53/C2 cluster, but the steep overall rise in rrDLBCL alterations should be noted as a critical factor to consider. Our secondary rrDLBCL cohort indicated that increased alterations remain favored to enrich in GCB-designated cases, but larger populations and sequencing studies are warranted to identify de-novo EZB/corresponding patients most likely to develop -induced relapse. Lastly, although alterations were enriched and clonally stable after the rrDLBCL transition (and typically enrich in de-novo EZB/C3/BCL2 cases), the Rushton analysis did not highlight if this rise was restricted to the GCB-like subsets. Our analysis did not observe significant association with GCB-like alterations in rrDLBCL, although they did trend towards them (Supplementary Table 2). Heavy overall enrichment (64/127 patients) may have proven difficult for alterations to find a consensus association with other genes. This could also indicate that their role in rrDLBCL biology is unique.

In conclusion, we report the enrichment of alterations towards EZB/corresponding rrDLBCL tumors (and their designate alterations) during disease transition. The strong EZB/corresponding profile of our RR2 group and consequent enrichment of alterations highlights the importance of DNA classification models and adds clarity to patterns of rrDLBCL evolution. The rising importance of liquid biopsy monitoring in rrDLBCL patients is made all the greater by the growing indication that impairment may predict poor response to CAR-T therapy due to the introduction of immunosuppressive pathways, specifically discussed by Shouval and colleagues at the 2021 American Society of Hematology conference [15]. mutation status, in combination with other prognostic factors, may therefore be used to identify high-risk patients prior to CAR-T treatment.

This study was supported by the Minnesota State University, Mankato College of Science Engineering and Technology through startup funds, facilities, and resources. Dr. Javeed Iqbal and Dr. Alyssa Bouska from the University of Nebraska Medical Center kindly offered their support and counsel. Author Contributions are as follows: S.L., V.N., K.W., J.G., A.R., and K.T.H. performed investigations and analyses. K.T.H. and S.L. were responsible for revision. K.T.H. was responsible for conceptualization, data curation, formal analysis, funding acquisition, writing, and supervision.