Abstract
Background
In this retrospective cohort of patients with primary, post-polycythemia vera, or post-essential thrombocythemia myelofibrosis, 57 patients with MF who received ruxolitinib for MF-related symptoms or symptomatic splenomegaly were evaluated.
Methods
The median age of the patients in this cohort was approximately 58 years. Of these, there were 33 patients (57.9%) in INT-1, 23 patients (40.4%) in INT-2, and 1 patient (1.8%) at high risk. Overall, spleen size reduction of at least 35% (spleen response) was achieved in 56.6% and 63.3% of all cohort and INT-1 risk at any time, respectively.
Results
Symptom response and clinical improvement were observed in 21.7% and 60.7% of patients, respectively. Anemia and thrombocytopenia were prevalent, but manageable. About 73.7% of patients continued treatment during a median follow-up of 22 months. Two-year OS probability was approximately 84.5% (95% CI, 63.1‒94.0%) and 62.3% (95% CI, 37.5‒79.6%) for the intermediate-1 and -2 risk groups, respectively.
Conclusion
Real-life experience in a community-based hospital confirms the efficacy and safety profile of ruxolitinib in intermediate-risk myelofibrosis. Treatment discontinuation rates were lower than those in clinical trials.
Keywords: Primary myelofibrosis, Ruxolitinib, Spleen response

There are various treatment options for palliative and supportive treatment. Although allogenic stem cell transplantation is the only curative treatment, it carries a high risk of morbidity and mortality [7]. Ruxolitinib, a Janus kinase-1 and 2 (JAK1/2) inhibitor, is a treatment option to relieve symptomatic splenomegaly and constitutional symptoms in patients with INT-2 and high-risk MF. Spleen response rates were reported as 41.9% at 24 weeks and 53.4% at any time in the COMFORT I and II studies, respectively. In addition, constitutional symptoms improved significantly in both the studies [8, 9]. The most common side effects were thrombocytopenia and anemia. However, these studies did not include patients with MF or INT-1 risk. According to recent literature, the JUMP study showed that ruxolitinib had significant clinical benefits with acceptable tolerability in INT-1 risk MF patients with splenomegaly [10].

In this retrospective study, we aimed to document real-life clinical experiences with ruxolitinib in primary and secondary MF patients.

This was a single-institution retrospective cohort of patients with primary MF (PMF), post-polycythemia vera MF (post-PV MF), and post-essential thrombocythemia MF (post-ET MF), which were diagnosed according to World Health Organization (WHO) 2016 criteria [11].

Fifty-seven patients who received ruxolitinib were included in the analyses. All patients were at least 18 years of age and had INT-1/2 or high-risk disease according to the DIPSS-plus risk classification. Ruxolitinib was used for symptomatic disease and/or symptomatic splenomegaly, which is resistant or intolerant to conventional cytoreductive therapy in patients with IPSS INT-1 and INT-2, or high risk. Ruxolitinib doses that were administered ranged from 5–25 mg twice daily. Dose modifications were made according to efficacy and side effect profile as previously described [8]. All data including demographic characteristics, laboratory test results, ultrasound reports, symptom assessment questionnaires, survival status, and side effect profile were recorded from patient’s chart file. Approval was obtained from the institutional ethics board.

Spleen size was measured by ultrasound examination. Myeloproliferative neoplasm symptom assessment from the total symptom score (MPN-SAF TSS), a disease-specific questionnaire, was used to evaluate the symptom response. Symptom response was defined as at least a 50% reduction in myelofibrosis-related symptoms. A symptom improvement of 5% to 49% was termed clinical improvement.

Overall survival (OS) was estimated as the time elapsed from the beginning of ruxolitinib until death of any cause or last contact. Common Terminology Criteria for Adverse Events (CTCAE) version 5 were used to grade the side effects.

The primary endpoint was spleen response, which was defined as at least a 35% reduction in spleen size at any time during the therapy. Secondary endpoints included spleen response at the sixth month of therapy, symptom response, clinical improvement, overall survival, and safety profile of ruxolitinib.

Comparing the characteristics in INT-1 vs INT-2/high risk.

Twenty-three patients had the MPN-SAF TSS during the course of treatment. Five patients (21.7%) had at least a 50% reduction (symptom response) in myelofibrosis-associated symptoms. In 10 patients (43.4%), a 20-50% reduction in symptom scores was observed. Four patients (17.3%) had only mild (5–10%). Four patients did not respond.

Fifty-two out of 57 (91%) patients experienced hematologic side effects. The most common hematologic adverse events were anemia (all grades, 84.2%; grade 3–4, 42.1%) and thrombocytopenia (all grades, 38.6%; grade 3–4, 17.5%; Table 2). Cytopenia was more prominent within the first three months. However, those tended to recover at the end of six months and approached near-normal values by the end of the year (Supplementary Fig. 2). These adverse events were mostly manageable, and only four patients discontinued treatment due to cytopenia.

A total of 27 out of 57 patients experienced non-hematologic side effects, which were generally grade 1–2. The most common non-hematologic adverse events were fatigue, pneumonia, and elevated liver enzyme levels. Pulmonary embolism was observed in two patients who had pneumonia. Herpes zoster infection, hepatitis B virus (HBV) reactivation, and urinary tract infection were noted. Unexpected adverse events included peripheral polyneuropathy, cataracts, proteinuria, and pancreatic adenocarcinoma. Treatment was discontinued because of these adverse events. Overall, three patients were diagnosed with cancer, including pancreatic adenocarcinoma, squamous cell carcinoma of the skin, and metastatic neuroendocrine tumor (Table 2). Patients with INT-1 risk had a similar safety profile (Supplementary Table 1). 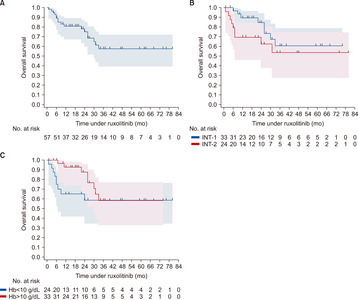 In this study, we observed that ruxolitinib use led to a spleen and symptom response in approximately 56.6% and 21.7% of patients with MF, respectively, according to the 2013 IWG-MRT and European Leukemia Net (ELN) response criteria [14]. Hematological side effects were observed in almost all patients. However, these were mostly manageable. The non-hematologic side effects were generally mild.

A spleen size reduction of at least 35% was achieved in 43.4% at 6 months in our population, which was similar to that of COMFORT-I (41.9%). Consistent with the COMFORT-II trial (53.4%), spleen response, which was achieved at any time during the follow-up, was approximately 56.6% [8, 9]. We found that the spleen response was approximately 63.3% and 43.3% in the INT-1 risk group at any time and sixth month of therapy, respectively. At 48 weeks, a ≥50% reduction in palpable spleen length was observed in 57.1% of patients with INT-1 risk in UK ROBUST [15] and 60.5% in the JUMP study [10]. In an independent study that evaluated the efficacy and safety of ruxolitinib in 70 patients in the INT-1 risk group, the spleen response was 54.7% at 6 months [16]. Our results confirm the efficacy of ruxolitinib in both INT-1 and higher risk groups. The presence of ASXL1, EZH2, SRSF2, U2AF1, or IDH1/2 mutations was defined as high molecular mutation (HMR). Unfortunately, the molecular risk profile cannot be documented in unresponsive patients. Two unresponsive patients in our cohort had non-cirrhotic portal hypertension.

Palandri . [16] found that ruxolitinib-related anemia and thrombocytopenia were evident in 45.7% and 50.7% of patients in INT-1 risk group. In our cohort, prevalence of anemia and thrombocytopenia was 78.8% and 50%, respectively for INT-1 group. The prevalence of real-life ruxolitinib-related anemia may be higher than expected. Nevertheless, anemia infrequently leads to drug discontinuation.

Three patients had non-hematologic malignancies, including pancreatic adenocarcinoma, squamous cell carcinoma of the skin, and metastatic neuroendocrine tumor. These cancers were observed during the 1st, 2nd and 48th months of ruxolitinib treatment, respectively. All patients had a history of treatment with hydroxyurea. The patient with pancreatic cancer died soon after the diagnosis. The other patients were still alive and received anti-neoplastic treatment. Considering the timing of the cancers, there is probably no causal relationship between ruxolitinib and non-hematologic cancers. In a South Korean study, Hong . [19] found that the risk of developing secondary solid tumors was 2-fold higher in patients with MPN than in the normal population. Eighty (13.5%) out of 594 patients with PMF (median follow-up 31.8 mo) had secondary malignancies, and among the 85 patients with secondary myelofibrosis (median follow-up 10.3 mo) 4-year cumulative incidence rate of malignancy was 10.3%. These findings were not associated with ruxolitinib use.

The COMFORT-II trial, which was quite similar to the current study in terms of follow-up time (2.6 vs. ∼2 years, respectively) and spleen response (53.4% vs. 56.6%, respectively), reported a very high discontinuation rate in the ruxolitinib arm (73.3%). The discontinuation rate was even higher in patients who crossed over from the best available treatment arm (75.6%) [17]. However, 73.7% of patients in our cohort were still receiving ruxolitinib treatment, with a median follow-up of 22 months. As aforementioned, our cohort was younger than that of previous studies. As stem cells become older, their renewal capability decreases. The reduced hematopoietic reserves cannot properly manage drug-related hematologic toxicity. In this real-life data comprising relatively younger patients, most of the patients tolerated ruxolitinib well, and continued to use it at effective doses.

We calculated that the 2-year OS probability was approximately 75.1% and 84.5% in all cohorts and in the INT-1 risk group. Causes of death were disease progression, transformation to acute leukemia, and pancreatic adenocarcinoma. No deaths were attributed to COVID-19. In the COMFORT-II study, the 5 year-OS was reported as 56%. However, it was emphasized that these results may cause confusion due to crossover between treatment arms [17]. In contrast, an independent study evaluating the outcomes of INT-1 risk myelofibrosis estimated that 2-year OS was 80.1% [16]. We can conclude that an average 2-year OS under ruxolitinib is about 80 to 85% in patients with INT-1 risk MF.

Pooled 3-year analysis of the COMFORT trials reported that baseline anemia was associated with a shorter OS in both the ruxolitinib and control groups. However, ruxolitinib-related anemia had no adverse impact on OS [13]. We observed that patients who did not have baseline anemia tended to have a better OS within the first three years, but the survival curves merged thereafter. Patients with lower basal hemoglobin values had profound cytopenia, worse bone marrow function, and larger spleen sizes. Most of the deaths occurring within the first three years were due to disease progression rather than drug side effects. Therefore, baseline anemia is associated with advanced disease, and it is probable that ruxolitinib exerts favorable effects on survival with long-term use.

The retrospective design of this study is the most important limitation. In addition, analysis of OS is limited because of the short follow-up period. Adverse event profiles may not be complete because of reporting and detection biases. Symptom assessment was completed by less than half of the patients. Despite these limitations, our data were consistent with the findings of randomized controlled trials (RCTs).

In conclusion, ruxolitinib is effective and safe in patients with INT-1 and higher-risk MF.