Abstract
Background
The treatment of adult Burkitt lymphoma with pediatric-based chemotherapy protocols usually results in high cure rates, although with significant toxicity. We report our experience with the Cancer and Leukemia Group B1002 (CALGB 1002) protocol.
Methods
The files of adult patients diagnosed with Burkitt lymphoma and treated with the CALGB 1002 protocol at King Hussein Cancer Center between 2008 and 2017 were reviewed. Baseline demographics, clinical laboratory features, treatment details, and responses were collected. The correlations between clinical and laboratory variables with event-free survival (EFS) and overall survival (OS) were determined by univariate and multivariate analyses using backward stepwise Cox regression models. EFS and OS were plotted using Kaplan‒Meier curves.
Results
This study included 19 patients with a median age of 33 years (range, 19‒65). Eleven (58%) and two (10.5%) patients had advanced-stage and central nervous system disease, respectively. Among 106 administered cycles, the median interval between cycles was 23 days (range, 19‒84 days). Sixteen patients (84%) achieved a complete response. After a median follow-up of 40.8 months, the 3-year EFS and OS rates were 78.95%. Patients with a low-risk International Prognostic Index (IPI) had better survival than those with intermediate-or high-risk IPI. Grade III‒IV hematological toxicities occurred in 88% of patients, while 73% had grade III‒IV mucositis.
Conclusion
In adult Burkitt lymphoma, the CALGB 1002 protocol provides high cure rates and can be administered promptly, but is associated with significant toxicity. Risk-adapted approaches and other, less toxic, chemotherapeutic regimens should be considered.
Keywords: Burkitt lymphoma, CALGB 1002, International Prognostic Index

Burkitt lymphoma (BL) is a highly aggressive B-cell non-Hodgkin lymphoma (NHL) characterized by a high proliferation rate (Ki 67 of approximately 100%) and deregulation of the MYC gene. It is more common in the pediatric age group, peaking around 10 years of age, but accounts for only about 1% of all NHL in adults [1-3].

The treatment of BL in adults is challenging because of the lack of randomized trials to define the best initial regimen. Most first-line regimens are adopted from intensive pediatric protocols and include a combination of anthracycline, alkylator, vincristine, etoposide, and agents to treat and prevent CNS disease [5].

Cancer and Leukemia Group B (CALGB) developed an intensive regimen (CALGB 9251) that initially included multi-agent chemotherapy with prophylactic cranial radiotherapy and 12 doses of intrathecal chemotherapy (ITC) [6]. As 61% of patients in the first cohort developed severe neurological toxicity, in the second cohort, prophylactic cranial radiotherapy was administered only to patients with bone marrow involvement, and only seven ITC doses were administered. The 5-year overall survival (OS) rate was 52%. In a follow-up study (CALGB 1002), the addition of rituximab resulted in improvements of 4-year event-free survival (EFS) and OS to 78% and 74%, respectively [7].

We retrospectively analyzed the medical records of adult patients diagnosed with BL and treated with the CALGB 1002 regimen at the Medical Oncology Department, King Hussein Cancer Center in Jordan between January 2008 and December 2017.

The details of the treatment protocol are provided in Table 1.

Staging was performed according to the Lugano staging system based on computed tomography (CT) scans [8]. Bulky disease was defined as tumor bulk >10 cm in the transverse or coronal diameters. The International Prognostic Index (IPI) was calculated as initially described using age, performance status, LDH level, stage, and number of extranodal sites [9]. The patients were considered to have low risk if they met all of the following criteria: Lugano stage I–II, normal LDH, ECOG performance status of 0–1, and tumor mass <10 cm [10]. Patients who did not fulfill the criteria for low-risk disease were considered to have high-risk disease.

The correlations of different clinical and laboratory variables with EFS and OS were determined by univariate and multivariate analyses using the backward stepwise Cox regression model. The EFS and OS were calculated and plotted using the Kaplan–Meier method.

Sixteen patients (84%) achieved a complete response (CR), while the other three patients failed to achieve a CR (one had a partial response: one died of chemotherapy-related sepsis before having a response evaluation, and one developed disease progression). 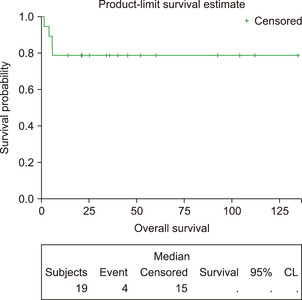 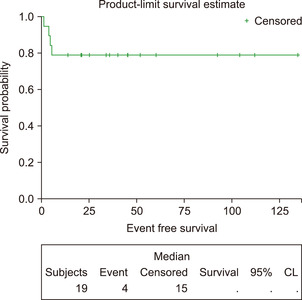 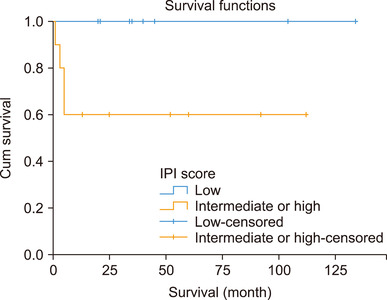 Figure 3. Overall survival in patients with low- and high-risk disease (=0.138). 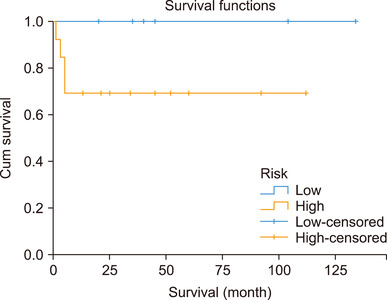 Univariate analysis showed that abnormal LDH, intermediate or high IPI, and bulky disease were correlated with worse OS. However, none of these factors was significant in the multivariate analysis (Table 3).

Hematological toxicities, including grade III–IV neutropenia and thrombocytopenia, were both found in 88% of patients, while febrile neutropenia occurred in 89% of patients. The most important grade III–IV non-hematological toxicities were mucositis, which occurred in 13 patients (72%). Two patients (10.5%) from chemotherapy-related toxicities, one after the second cycle and the second after the fifth cycle.

We reported our experience with the treatment of BL with a uniform chemotherapy protocol. To our knowledge, only one study has previously reported real-life experiences with the CALGB protocol in BL [13]. Comparison to the original study by Rizzieri . [7], our patients had more favorable features including younger median age (33 vs. 43 yr) and fewer patients with initial bone marrow involvement (10.5% vs. 28%), B symptoms (26% vs. 48%), and high-intermediate or high IPI scores (32% vs. 47%). However, the EFS and OS rates were almost comparable, which might be explained by the smaller sample size and relatively higher treatment-related mortality (10.5% vs. 6.6%).

Interestingly, as observed in most BL trials, all of our patients who achieved CR after completion of treatment continued to be disease-free until the last follow-up.

Several features of the CALGB 1002 protocol contribute to its high efficacy, including the use of non-cross-resistant chemotherapeutic agents, lack of treatment delays (as demonstrated in our study), and aggressive CNS prophylaxis [14]. However, the major disadvantage of the CALGB 1002 protocol is the lack of a risk-stratified approach. This may result in unnecessary exposure of low-risk patients to toxic treatments. Most trials stratify patients according to their initial features as well as their interim response to treatment. The features used to define “high risk” included one of the following: elevated LDH, ECOG performance status ≥2, and bulky disease (7–10 cm). Although using

Risk-stratified treatment was also tested in 113 patients treated with a dose-adjusted EPOCH-R (etoposide, prednisone, vincristine, cyclophosphamide, doxorubicin, and rituximab) protocol [16]. The low-risk patients were administered two cycles, and a third cycle if PET-CT scans showed no evidence of disease. Patients who did not achieve complete remission after the second cycle and all high-risk patients were administered six cycles. The 4-year EFS rates were 100% and 82.1% in the low- and high-risk groups, respectively.

Similar to the results of many BL studies [7, 17, 18] our study findings confirmed the significantly inferior outcomes of patients with intermediate and high IPI compared to those of patients with lower IPI scores (3-yr EFS: 60% vs. 100%). The best management of BL with high-intermediate and high IPI remains unclear. A recent phase II UK-NCI trial showed that the use of rituximab with CODOX-M/IVAC was associated with more favorable outcomes [2-yr progression-free survival (PFS) of 77.2% and OS of 80.7%] [19]. In addition, in a multicenter trial that reported the outcomes of patients treated with dose-adjusted EPOCH-R, the outcomes were favorable regardless of IPI [16].

The use of pediatric-inspired protocols in adult BL is associated with substantial hematological and non-hematological toxicities, with treatment-related mortality occurring in 5–10% of patients [7, 10, 20-22]. The use of dose-adjusted EPOCH-R was associated with favorable outcomes (4-yr EFS and OS of 84.5% and 87%, respectively) with much lower toxicities. However, patients with CNS involvement were at high risk for treatment failure, with an EFS of only 40% [15]. Moreover, a recent multicenter cohort study showed that CNS relapse was more common in dose-adjusted EPOCH-R than in CODOX-MI/VAC and Hyper-CVAD (13% vs. 4% and 3%, respectively) [23]. Incorporation of high-dose methotrexate with dose-adjusted EPOCH-R has been successfully attempted [24, 25] and may help to improve the outcomes of patients with CNS involvement and decrease the rate of CNS relapse.

Our study has important limitations, including its retrospective nature and the small number of patients observed in most of the BL studies.

In conclusion, despite its substantial toxicities, CALGB 1002 could be administered promptly, resulting in high cure rates among patients with BL. Adoption of risk-adapted approaches, as well as the use of less intensive chemotherapeutic protocols, would direct future progress in the treatment of BL.