Erythrocytosis is a common cause of referral for hematological evaluation due to its frequency; however, it is a poorly studied entity in clinical practice. Assessment is mainly focused on ruling out the primary causes of erythrocytosis since the diagnosis of secondary causes usually takes longer and often remains inconclusive. Undiagnosed entities may affect the quality of life of patients, and some studies suggest that certain secondary etiologies may increase the risk of thrombosis [1].

In adults, polycythemia vera (PV) is the main primary cause of erythrocytosis. It is an uncommon myeloproliferative neoplasm, with an annual incidence of 0.01 to 2.61 per 100,000 people [3] and a prevalence of 44 to 57 per 100,000 people in the United States [4]. The prevalence of secondary erythrocytosis differs according to patient population and is believed to be much higher than that of primary erythrocytosis. Secondary causes of AE are more common, with numerous possible causes, most commonly after a response to tissue hypoxia. Obstructive sleep apnea (OSA); central hypoventilation; and chronic lung disease (CLD), including chronic obstructive pulmonary disease (COPD), are among the most common causes of hypoxemia. An appropriate assessment is imperative to make a precise diagnosis and prevent complications.

Thrombotic events are well documented in PV, but it is uncertain if secondary etiologies cause an increased risk of thrombosis. A retrospective study of 172 patients with COPD revealed a higher risk of venous thromboembolism in those with erythrocytosis (20% vs. 14%), although the difference was not statistically significant [5]. Our study aimed to evaluate the association between erythrocytosis and the risk of thrombosis according to etiology in a single referral center in Mexico City.

A retrospective observational cohort study was performed to evaluate all patients with erythrocytosis between January 2000 and December 2017 at the Instituto Nacional de Ciencias Médicas y Nutrición Salvador Zubirán in Mexico City. Medical history to determine the presence of baseline characteristics and cardiovascular risk factors was obtained from the electronic medical records. Eligible patients were 18 years or older with laboratory-proven erythrocytosis. Erythrocytosis was defined according to the 2016 WHO classification as a Hb concentration of >16.5 g/dL or Hct of >49% in men, and Hb concentration of >16.0 g/dL or Hct of >48% in women [6]. Patients who did not meet the 2016 World Health Organization (WHO) classification for erythrocytosis were excluded. Chronic lung disease was defined as the presence of one of the following: COPD, asthma, pulmonary fibrosis, chronic pulmonary embolism, and obliterative bronchiolitis. Thrombotic events at diagnosis and follow-up included ischemic stroke, cerebral transient ischemic attack, acute myocardial infarction, peripheral arterial thrombosis, and venous thromboembolism (deep vein thrombosis of the limbs or the abdominal vein and pulmonary embolism). Thrombosis at diagnosis considered all events that consigned to the original medical record. Postdiagnosis thrombotic events included well-documented thrombosis in the files according to the appropriate diagnostic study. Major hemorrhage consisted of any bleeding that led to hospital admission.

The primary endpoints were thrombosis, major hemorrhage, and death according to the etiology of erythrocytosis. This study was approved by the institutional ethics committee and was performed in accordance with the ethical standards of the 1964 Declaration of Helsinki and subsequent amendments.

This study aimed to determine the causes of erythrocytosis and to identify its impact as a risk factor for thrombosis.

Categorical variables were presented as frequencies and percentages, while numerical variables were described with median and interquartile ranges. All characteristics were described overall and within the three main etiologies: PV, OSA, and CLD. Characteristics when erythrocytosis was detected, laboratory findings during the diagnostic approach, and events during follow-up were compared among patients with PV, OSA, and CLD using the chi-square test when categorical, and analysis of variance when numerical.

Incidence rates for thrombosis, major hemorrhage, and death during follow-up and their corresponding event-free survival rates were calculated using the Kaplan–Meier method and compared using the log-rank test. The event-free survival for each patient corresponded to the time from diagnosis to the event: it was computed exactly for those who had the event and right-censored at the time of last follow-up for those who did not have the event. A Cox proportional hazards regression model was used to evaluate whether the hazard of each outcome for patients with OSA or CLD was the same as for patients with PV, adjusting for cardiovascular risk factors (age, sex, BMI, hypertension, diabetes, and smoking). -values were 2-tailed, and <0.05 was considered statistically significant. Statistical analyses were performed using R version 4.0.3.

Characteristics at the beginning of the diagnostic approach

Clinical findings when erythrocytosis was detected.

Findings during the diagnostic approach

Laboratory findings during the diagnostic approach.

Complementary studies during the diagnostic approach.

Therapies received and events during follow-up

Concerning the treatment for erythrocytosis and its complications, 42% of the patients had at least one phlebotomy, 54% received aspirin, 16% received anticoagulants, and 24% received oxygen or continuous positive airway pressure. A quarter of the patients did not receive any specific treatment. 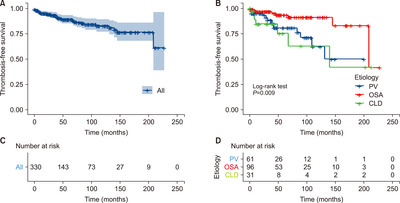 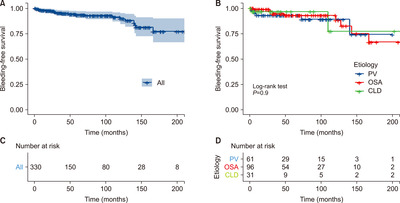 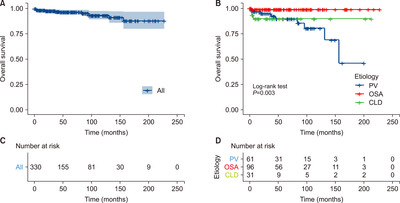 Hazard ratios for the main outcomes during follow-up.

We retrospectively analyzed the clinical and laboratory data of 330 patients with erythrocytosis at our institution to assess the relationship between the etiology of erythrocytosis and thrombosis. The present study is the largest cohort study on erythrocytosis in the Latin American population, and the first to provide an in-depth description regarding the assessment of this condition. Thrombotic events are a hallmark of myeloproliferative neoplasms, presenting in approximately 20% of patients, with PV as the initial manifestation. The spectrum of events includes arterial (e.g., ischemic stroke and myocardial infarction), venous (e.g., deep vein thrombosis and pulmonary thromboembolism), and unusual site thrombosis (e.g., cerebral sinuses and portal vein) [7]. In addition, they represent the first cause of morbidity and mortality in this group of patients [8, 9].

Historically, erythrocytosis has been associated with thrombotic events because of the primordial impact of erythrocyte mass on blood viscosity. In 1978, Pearson and Wetherley-Mein [10] published a retrospective analysis of 69 patients with PV correlating an Hct of >50% with an increased risk of thrombotic events. This study established an Hct of <50% and platelet count of <400×109/L as the goal of treatment [10]. Unfortunately, this goal was extrapolated to secondary causes of erythrocytosis, with a lack of evidence to support it.

Despite the inherent limitations, observational studies have shown that thrombosis does not accompany most forms of erythrocytosis [11]. The significant difference in the frequency of thrombotic events between PV and secondary erythrocytosis and the paradoxical increase in thrombotic events in patients with PV after phlebotomy defies the relationship between Htc, viscosity, and thrombosis [12, 13].

In particular, in cases of PV, novel insights have shown that thrombosis pathogenesis is complex and does not involve only red cells, platelets, and leukocytes [14]. The increase in the endothelial expression of cellular adhesion molecules, the presence of neutrophil extracellular traps, and interactions between erythrocytes and platelets through the FAS-FAS ligand pathway could explain how patients experience thrombotic events before meeting the diagnostic criteria for PV or despite meeting the goals of Hct after therapy [14, 15].

Despite the comparable rates of thrombotic events observed between PV and CLD in our study, other studies have shown that COPD increases the risk of thrombotic events without a direct relationship with the presence of erythrocytosis [16]. The thrombotic risk could be related to factors such as cytokines, infections, and age of participants. This study does not directly address the factors involved case by case; therefore, we could not discard the potential role of these factors. In 2019, Mao . [17] evaluated 151 COPD patients with secondary erythrocytosis (Hb ≥17 g/dL); 23.2% were treated with phlebotomy, and there was no significant difference in the prevalence of thrombotic events between phlebotomized and non-phlebotomized patients (31.4% vs. 22.4%, =0.28). In the group of phlebotomized patients, patients who achieved an Hct of <52% did not show any significant benefit in the prevalence of thrombosis (25% vs. 36.8%, =0.45) [17].

The controversies previously addressed extend to clinical guidelines. The British Society of Hematology only considers PV and Chuvash erythrocytosis as significant risk factors for thrombotic events and they were established as the goals of treatment with HCT values of <45% and 52%, respectively. In hypoxic pulmonary disease with erythrocytosis, the prognostic significance of erythrocytosis is not known, and the risk of pulmonary embolism is unclear. Management with phlebotomy is advised only in the context of hyperviscosity symptoms or Hct levels of >56%. The 2020 version of the American Society of Hematology for the management of venous thromboembolism (VTE) does not consider Hct as a risk factor for VTE, although this relationship has been suggested by epidemiologic studies [7, 18, 19].

Confirming the relationship between secondary erythrocytosis and thrombosis involves the inherent risk related to treatment (e.g., hypotension and iron deficiency in the case of phlebotomy) Our knowledge of thrombotic events in this particular group has changed notably in the last decade. Nevertheless, more studies are needed to evaluate the role of Hct in thrombosis genesis and the impact of phlebotomies in specific conditions. The difference in the rate of thrombotic events could likely be explained by concomitant factors and cellular changes that modify the thrombotic risk independently of Hct.

It is noteworthy that in 28% of the patients, a final diagnosis was not accomplished, and the median Hb level for this group was 18.6 g/dL (IQR, 18.1–19.4), which was significantly lower than that in the PV, OSA, and CLD groups (=0.005). Since this study used medical records from patients who attended a referral hospital in Mexico City, where the altitude is high (high altitude is one of the crucial factors of erythrocytosis), it is possible that in patients without a definitive diagnosis, erythrocytosis was secondary to these geographical characteristics.

The inherent limitations of this analysis include the retrospective nature of the design. The JAK2 mutation test was routinely performed until January 2014, and for patients diagnosed before 2014, the JAK2 mutation was performed in bone marrow tissue when biopsy was available. In addition, during the seventeen-year study, many great advances in medical practice were developed and more diagnostic resources were available, making a heterogeneous diagnostic assessment through time. Another limitation is that the study was performed at a high altitude; therefore, the results may not be applied directly to the general population. Nonetheless, this study provides a solid basis for future studies in Latin American populations.

In conclusion, the most frequent cause of erythrocytosis in this retrospective study was OSA, and a comprehensive assessment was frequently not accomplished. It is convenient to improve the diagnostic approach for suspected OSA with greater availability of polysomnography to achieve early treatment, avoid irreversible cardiovascular complications, and improve quality of life. The risk of thrombosis in CLD with erythrocytosis is comparable to that of PV. Further, larger-scale studies are needed to confirm these findings and evaluate the benefits of preventive management of COPD with erythrocytosis similar to PV.