A 15-year-old boy was initially presented to our hospital in 2007 with fever and breathing difficulty. Clinical examination showed bilateral cervical lymphadenopathy and hepatosplenomegaly. Contrast-enhanced computed tomography (CECT) showed mediastinal lymphadenopathy with bilateral pleural effusion. The hemogram showed a white blood cell (WBC) count of 19.5×109/L, a hemoglobin level of 11.0 g/dL, and a platelet count of 171×109/L. No blasts were observed in the peripheral blood film. The bone marrow aspirate and biopsy showed >80% blasts. These blasts were negative for myeloperoxidase (MPO), Sudan Black B (SBB), non-specific esterase (NSE), and periodic acid-Schiff (PAS) stain. Flow cytometric immunophenotyping of the bone marrow was performed at an external diagnostic center, which showed an immunophenotype consistent with precursor T-ALL. The blasts were positive for CD34, cytoplasmic CD3, CD5, CD7, and CD45 and negative for CD19, CD20, CD10, CD117, CD22, CD33, and MPO. Karyotype analysis was unsuccessful as no metaphase chromosomes were detected in the culture. Genetic studies were negative for 11q23 () gene rearrangement (11q23 probe; Cancer Genetics Inc., Rutherford, NJ, USA). The central nervous system was not involved. The patient was treated with an appropriate chemotherapy protocol (hyper-CVAD regimen). He achieved remission after 8 cycles of chemotherapy with complete blood count recovery. Subsequently, he was lost to follow-up at our hospital and reportedly continued treatment elsewhere. He was doing well post-treatment until mid-2020.

The patient was again admitted to our hospital in mid-2020 (13 years after the initial presentation in 2007) with complaints of fever and inguinal lymphadenopathy. No hepatosplenomegaly was observed on clinical examination. He had a WBC count of 16.0×109/L with 18% blasts and monocytosis (Fig. 1A). Hemoglobin and platelet counts were 5.3 g/dL and 60×109/L, respectively. The bone marrow aspirate showed two distinct abnormal populations on morphological examination; the first population consisted of medium-sized, round agranular blasts (65% of all nucleated cells), and the second population consisted of monoblasts, promonocytes, and abnormal monocytes (30% of all nucleated cells) (Fig. 1B, C). Flow cytometric immunophenotyping performed on the bone marrow sample showed two distinct abnormal cell populations (Fig. 2). The first population (45% of all viable singlets) showed negative to moderate CD45 expression and low side scatter (progenitor population). The cells expressed CD19, CD10, cCD79a, CD34, TdT, HLA-DR, CD13, and CD64 and were negative for c-MPO, CD117, CD33, cytoCD3, CD7, CD11c, CD2, and CD5. The second population was detected in the monocyte region and included 20% of all viable singlets. The monocytic population expressed CD34, CD64, and CD11c (dim). On cytochemistry, these blasts were positive for NSE (Fig. 1D) and negative for MPO and PAS stain. A diagnosis of B/myeloid MPAL was made. Cytogenetic analysis by conventional karyotyping showed no structural chromosomal anomalies. Targeted next-generation sequencing (NGS) showed mutations in (c.1926_1927insG), (c.313_314insTGGGCCCT), and (c.592G>A, IKZF1c.476A>C) with mutant allele percentages of 32.8%, 41.5%, and 45.2%, respectively. The patient was treated using an augmented Berlin-Frankfurt-Münster (BFM) chemotherapy protocol. On day 29 of treatment (post-induction therapy), the bone marrow showed complete remission with incomplete platelet recovery (platelet count, 25×109/L). 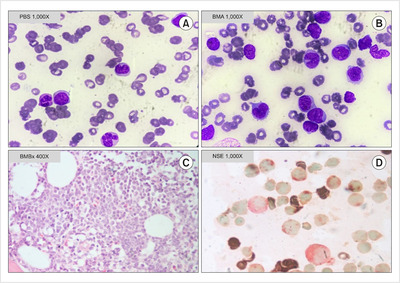 MPAL accounts for 2–4% of all acute leukemia cases, and prognosis is poor compared with that for ALL or AML [4]. MPAL is genetically extremely heterogeneous. According to the World Health Organization (WHO), a diagnosis of MPAL requires the expression of lineage-specific markers in at least two lineages [4]. Lineage switch occurs in 6–9% of acute leukemia cases during relapse [3]. Switching from ALL to AML is associated with gene rearrangement in most cases, especially in cases of pediatric leukemia [5, 6]. These cases are associated with poor survival. Lineage switch may occur due to a highly plastic original clone or the emergence of a new clone; however, the exact mechanism remains unclear [3]. One of the several hypotheses suggests that the original committed neoplastic clone is highly plastic, and phenotypic changes may be observed with or without changes in the genotype [3]. The possible role of the microenvironment in the switch is also suggested [3]. In clonal selection theory, the emergence of resistant subclones with different lineages at relapse has been hypothesized [7]. In B-ALL to myeloid conversion or vice versa, the role of a common B-myeloid progenitor is suggested. Myeloid switch from B-ALL can occur either by trans-differentiation, de-differentiation, or re-differentiation [8]. Lineage switch in acute leukemia is uncommon, partly because repeat immunophenotyping is not always performed at relapse. Most of the information found in the published literature describes a switch from B-ALL to AML or the reverse. Some studies reporting a switch from T-ALL to AML have been published [9-11]. However, lineage switch from T-ALL to B/myeloid MPAL appears to be extremely rare. To the best of our knowledge, this has not been published previously.

Relapse in childhood acute leukemia usually occurs within 2 years and is thought to arise from the same clone as that at the initial presentation. Late relapse may indicate a completely new clone, which is characteristic of secondary leukemia and associated with a prior history of cytotoxic therapy [12]. The presence of therapy-related myeloid neoplasms (t-MNs) is a late effect of chemotherapy (alkylating agents/topoisomerase II inhibitors) and/or radiation after the treatment of a primary disease (post-transplant lymphoproliferative disorders following solid organ transplantation) [13]. t-MNs are chemoresistant and have an aggressive course with a survival time of several months [13]. t-MNs associated with treatment using alkylating agents almost always have a dysplastic component in the marrow with cytogenetic anomalies such as del5q, del7q, or monosomy 7 on karyotyping [14]. Secondary ALL has been suggested to be constitutional and not related to any prior therapy [15]. In this case, targeted NGS analysis did not show any findings suggestive of germline mutations or constitutional abnormalities. The patient did not have any persistent symptoms attributable to cytopenias of myelodysplastic syndrome (MDS) prior to the second presentation. Karyotyping analysis at relapse did not reveal any MDS-defining cytogenetic abnormality, which is common in therapy-related myeloid neoplasms following the use of alkylating agents. Therefore, constitutional genetic abnormalities, MDS, and t-MNs were less likely in this case. The emergence of a resistant subclone at relapse or a highly plastic original clone may be responsible for the lineage switch in this case.

Cases of leukemia with lineage switch may have distinct biological characteristics and clinical features and may be associated with a poor prognosis and response to therapy [1]. Changes in the blast morphology and immunophenotype suggested lineage switch in this case. The recognition of this event may help to guide appropriate investigation and planning for therapy. Overall, the findings demonstrated the importance of repeat immunophenotyping even with acute leukemia relapse to identify relevant cases for proper management.