#These authors contributed equally to this study.
© The Korean Journal of Hematology. All rights reserved.

Abstract
Background
Chromosomal analysis is essential for the diagnosis and risk stratification of all leukemia patients. Not surprisingly, racial differences in chromosomal aberrations (CA) in hematological malignancies could be found, and CA incidence in leukemia might change over time, possibly due to environmental and lifestyle changes. Thus, we compared the frequency and range of CA in patients with acute leukemia (AL) during two time periods (2006‒2009 vs. 2010‒2015) and compared them with other prior studies.
Methods
We enrolled 717 patients with AL during a six-year period (2010‒2015). We compared the results to those of our earlier study (2006‒2009) [1]. Conventional cytogenetics, a multiplex reverse transcriptase (RT)-PCR system, and fluorescence hybridization were employed to assess bone marrow specimens or peripheral blood at the diagnostic stage in AL patients to detect CA.
Results
The incidence of CA changed in the leukemia subgroups during the two time periods. Notably, the most frequent CA of childhood acute myeloid leukemia (AML) was , and was followed by in the current study. In contrast, the most common CA was in a previous study [1] and was followed by . In this study, the most frequent CA of the mixed phenotype AL was , which was followed by . In a previous report, [1] the most frequent CA was , which was followed by .
Conclusion
The distribution of CA in Korean AL patients changed over time in a single institute. This change might be due to environmental and lifestyle changes.
Keywords: Acute leukemia, Chromosomal aberrations, Frequency, Spectra

CA develops in almost 56% of adult acute myeloid leukemia (AML) and slightly more often in childhood cases [2-4]. Racial differences in hematological malignancies between Asian and Western countries have been reported [5, 6]. The prevalence of CA in AL might change over time, possibly due to changes in various risk factors, such as environmental pollutants and lifestyle, as mentioned in a previous study [7, 8]. Therefore, we compared the frequency and spectra of CA in patients with AL during two time periods (2006–2009 vs. 2010–2015) in a single institute and with other previous reports.

FISH was performed in appropriate BM or PB specimens available from 609 patients, in addition to the conventional cytogenetic method. It was performed using an appropriate probe (Abbott Molecular/Vysis, Des Plaines, IL, USA), in accordance with the manufacturer’s instructions.

Conventional cytogenetic analysis was performed at the initial diagnosis phase using short-term cultures of BM cells. At least 20 metaphases were analyzed in each case, and the clonal CA was described according to the International System for Cytogenetic Nomenclature 2009 and 2013 (Supplementary Fig. 2).

Frequency and spectra of chromosomal aberrations according to the type of all acute leukemia patients using the multiplex RT-PCR system.

Frequency and spectra of chromosomal aberrations according to the type of acute leukemia and detection method in all patients using conventional cytogenetics, including FISH. 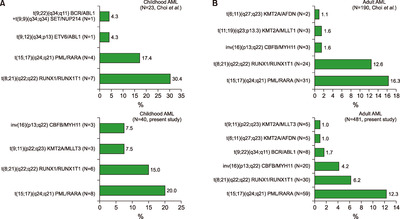 Figure 1. The prevalence of major chromosomal aberrations, which were detected using conventional cytogenetics, including FISH and multiplex RT-PCR, were compared to the previous study [1] and described according to leukemia type and age. Childhood AML, adult AML. 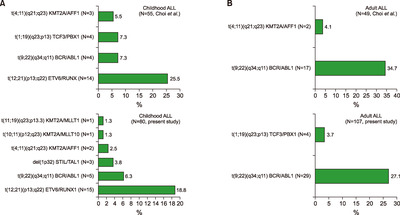 Figure 2. The prevalence of major chromosomal aberrations, which were detected using conventional cytogenetics, including FISH and multiplex RT-PCR, was compared to that of the previous study [1] and described according to leukemia type and age. Childhood ALL, adult ALL.

In the current study, 98 types of CA were determined in 717 patients with hematological malignancies. The multiplex RT-PCR system for screening 28 fusion transcripts identified only 16 types among them. Eighty-two types of leukemic fusion could not be found using multiplex RT-PCR, excluding numerical abnormalities. Three important CAs, such as i(17)(q10), t(3;3)(q21;q26.2), and t(8;14)(q24;q32), were found using conventional cytogenetics (Supplementary Table 7, 8, Supplementary Fig. 2).

Considering the many fusion genes and breakpoint variants currently determined, more than 50 separate PCR reactions are required to screen an AL patient with a standard operation [9]. We adopted a commercially accessible multiplex-RT-PCR system (DNA Technology) to identify 28 common fusion genes and over 80 splice variants based on previous research [9]. Data from Denmark using this system, which was employed on specimens from 143 patients with a median age of 63 years (range, 0–85 yr; 132 adults, 11 children), revealed that CA was identified in only 15% (21/143) of the patients [10]. In contrast, this study showed a higher CA frequency of 36% (228/637), using the same multiplex RT-PCR system: 35% (159/460) of AML patients, 38% (64/168) of ALL patients, and 56% (5/9) of MPAL patients. The rate of occurrence and spread of leukemic fusion genes in AL also differed from earlier European data [10]. CA occurred in 65% (24/37) of childhood AML cases, whereas it only occurred in about 40% (24/60) of childhood AML cases based on the same multiplex RT-PCR system from Austria [11]. The frequency of leukemic fusion genes in our ALL patients (38%, 64/168) was analogous to an Italian dataset utilizing the same multiplex RT-PCR system: 37% (28/75) and 39% (36/93) of childhood and adult ALL patients, respectively. In the Italian study, 39% of 170 ALL patients carried leukemic fusion genes: 39% and 40% of the childhood and adult ALL patients, respectively [12].

The most common CA in AML patients was the t(15;17) abnormality (15%, 67/460). The occurrence rate was higher compared to data from other institutes of Korea (6.7%), Caucasian (6.5, 10%), Australian (12%), Japanese (11%), and Singapore-Chinese (11%), but it was analogous to the Chinese data (14.3%) [5, 6, 13]. This discrepancy may be due to the sample size and likely to ethnic differences. The geographic diversity of CA in leukemia needs further study and a better understanding of the genetic and environmental factors associated with leukemia. The frequency and range of CA in ALL were similar between this study and previous studies [6, 14]. A balanced translocation of the fusion gene in ALL patients was the most common abnormality (20%, 34/168) in this study. The occurrence of the fusion transcript was lower than in the Southwest Oncology Group data (26%) [15], while it was higher than those in Indian (6%) and Taiwanese data (8%) [16, 17]. The most common CA in childhood ALL patients was the fusion transcript, which was followed by , gene rearrangements, , and . In contrast, the fusion transcript was the most common CA in adult ALL patients, which was followed by , , , and .

Interestingly, there were cases with significant CA, such as i(17)(q10), t(3;3)(q21;q26.2), and t(8;14)(q24;q32), that were not identified using the commercial multiplex RT-PCR system (Supplementary Table 8, Supplementary Fig. 2). These are very meaningful and typical CA in hematological malignancies, such as AL. t(8;14)(q24;q32) is a typical CA in patients with ALL (Burkitt type), and the t(3;3)(q21;q26.2) is a newly adopted recurrent CA in AML patients, in accordance with the 2008 WHO classification [1]. In addition, i(17)(q10) is repeatedly shown in the blast crisis of Philadelphia- positive CML patients. As a solitary CA, i(17q) has also been demonstrated in primary fibrosis, hypereosinophilic syndrome, and rare cases of myelodysplastic syndrome (MDS) and myeloproliferative neoplasm (MPN) that result in acute non-lymphocytic leukemia. In accordance with several studies, MDS/MPN, which contains the i(17q) as a single CA, is regarded as a distinctive entity with a frequency of 0.4–1.57% of MDS, or 1% of all myeloid cases, which features a male predominance, significant anemia, hyposegmented neutrophils, increased micromegakaryocytes, and an unfavorable prognosis [18, 19]. Thus, it is worth considering CA as an additional screening panel of leukemic fusion genes for improving the molecular detection system.

In conclusion, this study disclosed the frequency and range of CA in Korean AL patients, which differed from those of previous published reports. This change might be due to environmental and lifestyle changes [7, 8]. Our data were collected from a single center in Korea; thus, the findings may not be generalizable to other institutions. In addition, the limited number of patients might preclude definitive conclusions on the AL changes in Korea. Further studies to accumulate more evidence are needed to determine the change in spectra or range of AL. Nonetheless, this study might provide important information for improving the molecular detection system in Korean AL patients.

MGS designed the study. JHP and YEL enrolled the patients, collected clinical laboratory data, and performed laboratory measurements. HRK initially set up a multiplex RT-PCR detection system. JHP wrote the preliminary manuscript. MGS, JHP, and MGK analyzed the data. MGK, MGS, and HRK revised the manuscript. JHL, HJC, and JHS interpreted the data and provided valuable comments and recommendations. All the authors have revised and accepted the final version of the manuscript.