Bone marrow (BM) necrosis is a rare clinicopathologic condition characterized by infarction of hematopoietic tissue [1]. Regarding pathophysiology, BM necrosis is characterized by disruption of BM microcirculation initiated by factors such as inflammatory vessel injury or mechanical vessel obstruction, and mediated through cytokines such as tumor necrosis factor [2]. Distinguishing features of BM necrosis include the acute onset of debilitating bone pain, fever, pancytopenia, and increased biochemical markers such as lactate dehydrogenase (LDH) and alkaline phosphatase (AP) [2]. The most common etiology of BM necrosis is the underlying malignant disease, particularly hematologic malignancies [3, 4]. Rarely, it may be caused by chemotherapy such as imatinib, all-trans-retinoic acid (ATRA), or arsenic trioxide, as well as immunotherapeutic agents [5-9]. In addition, granulocyte-colony stimulating factor (G-CSF), administered after chemotherapy to aid hematologic recovery, has been associated with the development of BM necrosis [10].

For patients with hematologic malignancies, BM necrosis is most often diagnosed at time of initial disease presentation, or at relapse, underscoring the connection between leukemic blasts and necrotic pathology [2]. Identification of BM necrosis during chemotherapy while in complete remission (CR) of underlying disease is rare and can be alarming as the signs and symptoms of BM necrosis are similar to those observed at disease relapse.

Here, we report an adolescent T-cell acute lymphoblastic leukemia (ALL) patient who was diagnosed with sudden onset BM necrosis during sequential chemotherapy in first CR. We emphasize the clinical course of this patient as the characteristics of BM necrosis required differentiation from the possibility of ALL relapse. Furthermore, we were able to confirm rapid resolution of BM necrosis pathology.

A 16-year old male ALL patient was admitted for the 8th week of delayed intensification chemotherapy. Eight months previously, he had been diagnosed with T-cell ALL with rearrangement, and classified as very high risk due to age (15 years old) and initial white blood cell count (WBC) at diagnosis (375.71×109/L), according to our institution’s risk group classification scheme [11]. He had achieved CR after remission induction chemotherapy, and had subsequently received consolidation and interim maintenance treatment phases without event. Intensification chemotherapy in the 8th week consisted of vincristine, dexamethasone, daunorubicin, cyclophosphamide, and asparaginase administered during a period of 1 week [11]. By the 3rd day of chemotherapy, complete blood count showed WBC 1.06×109/L, absolute neutrophil count (ANC) 0.91×109/L, hemoglobin (Hb) 10.5 g/dL, platelet 128×109/L, and he was started on G-CSF (filgrastim) to aid in ANC recovery. By the last day of chemotherapy (day 6), WBC and ANC had decreased to 0.51×109/L and 0.23×109/L respectively despite consecutive G-CSF infusions (Fig. 1). 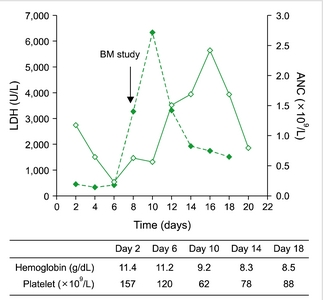 On the 6th day, the patient complained of acute and severe back pain requiring narcotic analgesia for pain relief. The pain continued the following day, and he also complained of dyspnea. Vital sign measurement revealed tachycardia (rate 100/min), tachypnea (rate 40/min) and oxygen saturation (SaO2) of 80–90% in room air. Blood gas analysis revealed PaO2 64.3 mmHg, PCO2 35.8 mmHg, and pH 7.44. Oxygen supplementation at 5 L/min by simple mask increased the SaO2 to 98%. Chest X-ray did not reveal abnormalities, and X-rays of the pelvis and L-spine were also normal. Electro-cardiogram (ECG) showed sinus tachycardia, and heart echocardiography was normal. Chest CT revealed multifocal ground glass opacities suggestive of pneumonia, without signs of pulmonary embolism, and he was empirically started on piperacillin-tazobactam and isepamicin. Blood cultures and serum galactomannan assay were negative. Although the patient continued to show neutropenia (ANC, 0.63× 109/L), G-CSF was stopped as it was considered a possible cause of the severe back pain.

On day 8, his serum LDH level showed a rapid increase from 677 IU/L the previous day to 3,257 IU/L (Fig. 1). Corrected reticulocyte count was 0.25%, making a hemolytic pathology unlikely. Aspartate aminotransferase (AST) and alanine aminotransferase (ALT) were 41 U/L and 110 U/L respectively. The signs and symptoms observed, including back pain, persistent cytopenia, and sudden increase in LDH, raised suspicions of relapse of underlying ALL. A BM study showed extensive necrosis (>50% necrosis, grade III) and absence of normal hematopoietic precursors, rather than leukemic involvement (Fig. 2). Reverse transcription-polymerase chain reaction (RT-PCR) study for was negative. Although back pain showed improvement, dyspnea persisted and the patient was started on methylprednisolone 125 mg/day to counter inflammation related to BM necrosis and possible pneumonia. Dyspnea showed improvement, and oxygen was tapered and stopped. Steroid was stopped after 3 days. The patient was discharged on day 14, by which WBC and ANC had increased to 2.44×109/L and 1.69×109/L respectively and LDH had decreased to 1,906 IU/L.

A follow-up BM study done 2 weeks after the initial study which confirmed necrosis showed 30% cellularity and normal maturation pattern of all 3 lineages without evidence of necrosis. RT-PCR for remained negative. A follow-up chest CT done 3 weeks after initial imaging evaluation showed complete resolution of previous lung opacities. He resumed and completed planned chemotherapy, and has been disease-free for more than four years after the end of therapy.

In this case study we emphasize the need to differentiate BM necrosis from potential relapse of hematological malignancy. Our patient experienced BM necrosis during first CR, and the combination of severe back pain, cytopenia albeit during chemotherapy, and the extremely high levels of LDH initially pointed to possible relapse of underlying ALL, rather than the rare condition of BM necrosis. BM study, done on 2 separate occasions to diagnose possible relapse, did not show evidence of leukemia according to both morphology and molecular studies. Overall, the acute onset of bone pain combined with cytopenia and increased LDH in a patient with hematological malignancy previously in remission requires inclusion of BM necrosis, as well as disease relapse, in the differential diagnosis.

As the patient had maintained CR, the etiology of BM necrosis may have been medication-related, rather than caused by leukemic involvement. Although he had been receiving numerous chemotherapy agents as part of intensification treatment, G-CSF that was given to help recovery from neutropenia may have been the cause of BM necrosis, as reported in a previous study [10]. He did not show further episodes of BM necrosis when given a different formulation of G-CSF during subsequent therapy. In addition, unconfirmed infectious agents possibly responsible for the abnormal chest imaging findings in our patient may have caused BM necrosis.

The prognostic relevance of BM necrosis in patients with malignant disease remains unclear. An adult patient-based study on 1,691 ALL and acute myeloid leukemia patients found that the 45 patients with BM necrosis at initial diagnosis had lower rates of CR and survival, compared with patients without BM necrosis [12]. However, studies on pediatric patients do not show a similar association between BM necrosis and worse outcome. One study reviewed 1,419 children with malignant disease, including acute leukemia, and found BM necrosis in only 7 patients, 6 of whom survived in remission [13]. Another study reviewed 12 reports detailing the outcome of 20 pediatric ALL patients with BM necrosis and found that all patients who presented after 1980 maintained long-term survival, possibly indicating that BM necrosis may not act as an independent prognostic factor when evaluated within the context of improved treatment of childhood ALL [14].

In summary, we report on the key findings of a T-cell ALL patient who showed BM necrosis during chemotherapy in first CR. Despite acute onset of pain and nearly complete necrosis of BM hematopoietic cells, clinical and histological recovery was rapid with supportive care, and he remains disease-free after completing treatment. The rare entity of BM necrosis should be considered in patients presenting with bone pain, cytopenia, and laboratory features suggestive of leukemia relapse.