Abstract
Background
Rare inherited coagulation factor deficiencies constitute an important group of bleeding disorders. A higher frequency of these disorders is seen in areas of high consanguinity. Our aim was to study the prevalence and spectrum of rare inherited bleeding disorders, characterize the severity of the deficiencies, identify different clinical manifestations, and evaluate different treatments provided.
Methods
This cross-sectional study was conducted in the Department of Haematology, Armed Forces Institute of Pathology Rawalpindi, between January 2014 and December 2018. A detailed history was taken, and an examination was performed. The signs and symptoms were noted, and the patients were diagnosed on the basis of a coagulation profile. The disease severity was assessed using factor assays.
Results
Among 2,516 patients with suspected coagulation disorders, 774 (30.8%) had an inherited bleeding disorder. Of the 774 patients, 165 (21.3%) had a rare bleeding disorder; 91 (55.2%) of them were males, and 74 (44.9%) were females, with a male-to-female ratio of 1.2:1. The median patient age was 9 years 3 months. The most common disorder was factor VII deficiency (46 patients, 27.9%). The most common clinical presentation was bruising in 102 (61.8%) and gum bleeding in 91 (55.2%) patients.
Conclusion
The most common rare bleeding disorder in our population is factor VII deficiency. The prevalence of these bleeding disorders is high in our population due to a high number of consanguineous marriages.
Keywords: Rare bleeding disorders, Factor deficiency, Factor assay

Rare bleeding disorders are a heterogeneous group of inherited coagulation disorders resulting from deficiencies in fibrinogen, prothrombin, factor V, factor VII, factor X, factor XIII, other than von Willebrand disease, factor VIII deficiency, and factor IX deficiency. It also includes some rare combined factor deficiencies such as combined factor V and VIII deficiency [1]. These disorders are usually transmitted in an autosomal recessive manner, apart from fibrinogen and factor XI deficiencies, which are inherited in an autosomal dominant manner. A higher frequency of these disorders is seen in populations in which consanguineous marriages are common [2]. Pakistan is one of the countries where marriages within the same family and within the same tribe are the norm; thus, the incidence of autosomal recessive disorders is high [3, 4].

The clinical spectrum is diverse [5]; while some patients may experience it in the neonatal period, others may present with postoperative or post-traumatic bleeding or may be completely asymptomatic [6]. Bleeding may range from mild occasional epistaxis or gum bleeding to life-threatening bleeding such as intracranial hemorrhage [7]. In some of these rare bleeding disorders, the degree of factor deficiency correlates with the severity of bleeding, whereas in the others, there is a marked phenotype–genotype disparity [8, 9].

Although rare, these disorders may present with significant bleeding; thus, early diagnosis is important to choose the right therapeutic decision [10]. Treatment options vary depending on the type of factor deficiency [11]. While definitive replacement therapy is achieved by factor concentrates, the availability of these factor concentrates in resource-constrained countries is limited, and even when available, the high cost of these factor concentrates is a major concern. For these reasons, clinicians may have to resort to fresh-frozen plasma (FFP) and cryoprecipitate to treat these patients. Establishing a correct diagnosis is of paramount importance to select a treatment, whether it is the specific factor concentrate or plasma product [12].

Pakistan, a developing country with limited resources, has lack of diagnostic facilities. The present study was designed to provide comprehensive data on the frequency of these rare bleeding disorders in this country. We conducted this study to describe the pattern of these bleeding disorders and the clinical presentations of these patients and to study the treatment provided to these patients presenting at our institute. The study findings will be useful to establish a database of these rare bleeding disorders in our population, which will help clinicians in the early diagnosis and to plan treatment accordingly.

This cross-sectional study was conducted at the Armed Forces Institute of Pathology, a tertiary care referral center providing specialized diagnostic facilities for coagulation disorders. The study was approved by the Ethical Review Committee of the Armed Forces Institute of Pathology, Rawalpindi. A total of 2,516 patients were enrolled in the study after obtaining informed consent from the patients, parents, and/or guardians. All patients presenting with a bleeding history or suspicion of an inherited coagulation disorder from January 2014 to December 2018 were included in the study. However, patients diagnosed with platelet function disorders or any acquired coagulation disorder were excluded from the study.

Demographic details were noted. A detailed history including past and present bleeding history, site(s) of bleeding, number of bleeding episodes, family history and consanguinity, treatment history, and history of transfusions was taken. Clinical examination was conducted, especially for any bruising or petechiae. The symptoms and signs were noted. Liver function tests were carried out to rule out any liver pathology affecting the coagulation profile.

Frequency distribution and features of patients with rare bleeding disorders. 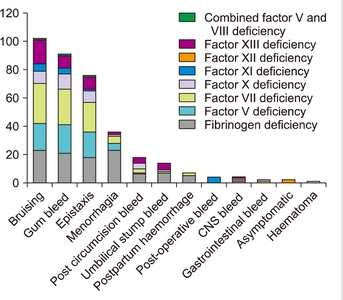 On follow-up, bleeding episodes were controlled only by local measures in 20 (12.1%) patients, and antifibrinolytics were the mainstay treatment in 49 (29.7%) patients. Eighty- eight (53.3%) patients required transfusions for their bleeding. Of them, 41 (24.8%) had received FFPs at least once, whereas 36 (21.8%) received FFP transfusions intermittently. Eleven (6.7%) patients received cryoprecipitate. Five (3.0%) patients received recombinant FVII (rFVIIa): three females required it at the time of delivery/cesarean section, one required it for postpartum hemorrhage, and a young boy needed it at the time of laparotomy. Three (1.8%) patients required no treatment during the follow-up period.

Knowledge of the prevalence of these disorders, clinical presentations, and management strategies has been established, and advanced treatment options are emerging in developed countries. However, in developing resource-constrained countries, delay in diagnosis and sub-optimal availability of therapeutic modalities have been major challenges in the management of patients with rare bleeding disorders. The biological heterogeneity and geographical variations in disease presentation and severity warrant the formulation of a registry for our population. Establishing a database for our population is essential for the timely diagnosis of these patients and to establish clinical treatment guidelines appropriate for our set-up and resources.

Autosomal recessive disorders are more commonly seen in regions with a high rate of consanguinity; this necessitates the establishment of diagnostic facilities to ensure prompt diagnosis and accurate treatment [17]. Among patients with rare bleeding disorders, consanguinity was found in 47.2% of the Turkish population and in 81.2% of our patients [18]. Mucocutaneous bleeding was the most common complaint in our population. Sharma . [15] reported similar findings. In our cohort, clinically significant bleeding was observed in patients having factor X deficiency. Intracranial bleeding was seen in two patients with factor X deficiency, one patient with factor VII and the other with factor XIII deficiency. However, an Indian study reported factor XIII deficiency as the most common cause of intracranial bleeding [15]. A comparison of the frequencies of different rare coagulation factor deficiencies between our data and international data is shown in Fig. 2 [19].

Figure 2. Comparison of the frequency of rare coagulation factor defici-encies between our data and international data [19].

This is one of the largest reported studies on rare bleeding disorders from our region. We have tried to comprehensively cover the demographics, clinical presentations, disease severity, and different treatments received. However, our study included only patients presenting to the hospital or referred to us. A large proportion of the population living in rural areas who do not have access to tertiary care diagnostic facilities remain undiagnosed. Thus, the frequency of these bleeding disorders in our population may be much higher than that reported. A limitation of this study is that the diagnosis of rare blood disease (RBD) was based on coagulation test results only, without molecular genetic studies, as Pakistan is a resource-constrained country and the facility used for the molecular diagnosis of RBDs is not available in our country. However, future studies on the molecular basis of RBDs are required to confirm the genetic nature of the deficiency in the Pakistani population. Knowledge of the incidence of these disorders will help to establish facilities for early detection and appropriate management, thus preventing life-threatening bleeding and mortality.