Paraproteinemic peripheral neuropathy (PPN) refers to peripheral neuropathy (PN) associated with and considered to be mediated by a monoclonal protein in the serum+urine [1]. About 4% patients with PN have an associated monoclonal gammopathy (MG) [2]. An assemblage of MG (<3 g/dL), small clonal population of bone marrow (BM) plasma cells (PCs) (<10%), and absence of myeloma defining events defines monoclonal gammopathy of undetermined significance (MGUS). The prevalence of MGUS in general population is about 0.7%, and it increases with age (3.2% in >50 yr and 5.3% in >70 yr) [3]. Therefore, both PN and MGUS may co-exist; ascribing pathogenicity of M-protein in such cases relies on demonstrating neurological improvement with treatment being targeted at the underlying clone secreting the implicated paraprotein. Recently, the term monoclonal gammopathy of clinical significance (MGCS) was introduced to describe the potentially organ-toxic properties of M-protein. Typically, the M-protein in MGCS is “small” and does not meet the diagnostic criteria for “large” clonal disorders such as multiple myeloma (MM) and Waldenstrom’s macroglobulinemia (WM) [4]. Such cases were earlier considered MGUS, undermining the potential pathogenicity of these proteins. Therefore, PPN without any evidence of MM or WM could be redefined as monoclonal gammopathy of neurological significance (MGNS). The current report describes a rare association of multifocal acquired demyelinating sensorimotor neuropathy (MADSAM) with a B-cell chronic lymphoproliferative disorder (B-CLPD) and its rapid response to rituximab. We intend to substantiate the broader concept of MGNS. 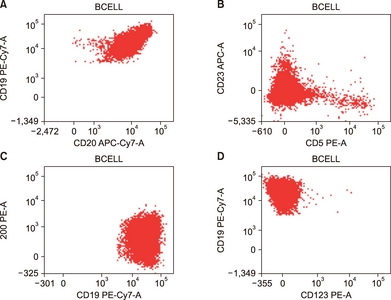 Mechanistically, M-protein can inflict PN either 1) directly, by means of tissue deposition and consequent neurological impairment, or 2) indirectly, by acting as an autoantibody directed against peripheral nerve antigens [1]. Whilst the former category includes amyloidosis-associated PN and cryoglobulinemic neuropathy (CN), the latter is exemplified by (a) distal acquired demyelinating symmetric neuropathy (DADS, IgM-MG, anti-MAG antibody), (b) chronic inflammatory demyelinating polyneuropathy (CIDP, IgG/IgA-MG), (c) chronic ataxic neuropathy with ophthalmoparesis, M-protein, cold agglutinins, and disialosyl ganglioside antibodies syndrome (CANOMAD syndrome, usually IgM-MG), and (d) polyneuropathy, organomegaly, endocrinopathy, monoclonal disorder, and skin changes (POEMS syndrome, vascular endothelial growth factor-mediated) [1, 5]. Association of MADSAM with MG has not been described [6]. CLL-like morphology, a low Matutes score, and CD200-positivity supported the diagnosis of aCLL in this case [7, 8]. Follicular lymphoma was unlikely because of CD10-negativity, and CD200-positivity excluded mantle cell and marginal zone lymphoma. Absence of plasmacytic differentiation and CD200-positivity argued against lymphoplasmacytic lymphoma (LPL). Absence of hairy cell markers excluded hairy cell leukemia [8, 9]. An abnormal sFLC ratio might not necessarily imply monoclonality and could happen in the setting of renal impairment or polyclonal FLC increase secondary to infection and inflammation [10]. Normal renal function test and immunoglobulin levels made these possibilities unlikely in our case. After exclusion of the polyclonal causes, abnormal sFLC ratio could suggest monoclonality, even if results of serum/urine electrophoresis and immunofixation are negative [11]. Our patient had B-CLPD (aCLL), evidence of monoclonality (abnormal sFLC ratio), and clinical and electrophysiological findings, suggesting MADSAM. Workup for amyloidosis and cryoglobulinemia was negative. Negative PN antibody panel was consistent with MADSAM [6]. Autoimmune manifestations including PN are well known in CLPD [12]. Normal Tregs and a negative autoimmune panel argued against this possibility. Absence of neural thickening or enhancement on 18FDG PET-CT scan and normal CSF analysis make consideration of neurolymphomatosis unlikely. Either direct toxicity or autoantibody property of kappa light chains could have been responsible for PN in our case. Rapid clinical response seen with single agent rituximab, paralleled by decline in clonal B-cells and normalization of sFLC indicates MG-driven neural damage. Clinical response deepened with maintenance rituximab, possibly suggesting ongoing clonal eradication with possible neural regeneration. Recently, Chen [13] described 5 patients with IgM-paraprotein related PN, with identifiable B-cell clones in the BM. Responsiveness to rituximab suggested potential significance of B-cell clones as the underlying cause of the pathogenesis of PN. Identification of clone secreting M-protein (B-cells, PC, and LPL cells) is of paramount significance as clone-directed therapy (rituximab-based regimens for B-cell clone, bortezomib, or lenalidomide-based regimens for PC clone, and either of the two regimens for LPL-clone) improves clinical outcomes of MGCS, including monoclonal gammopathy of renal significance [3, 4]. Although PN has been reported in about 2.2% cases of CLL, response of PN to rituximab monotherapy has not been described. Moreover, occurrence of PN in a patient with aCLL has not been reported [14]. Since data for clone-directed therapy in PPN is most robust in POEMS syndrome and DADS (anti-MAG neuropathy) [5], the current report widens the spectrum of PPN; thus, we propose the term “MGNS” for PPN unrelated to MM and WM. Presence of MG in a case of PN must trigger a search for an underlying clone as timely initiation of clone-directed therapy could possibly improve neurological outcome.