Myeloid sarcoma (MS) is an extramedullary myeloid neoplasm composed of myeloblasts or immature myeloid cells. It is also known as chloroma owing to its green gross appearance attributed to the enzyme myeloperoxidase in the immature myeloid cells. WHO guidelines define it as a tumor consisting of myeloid blasts, with or without maturity [1]. The most common areas of involvement are the skin, soft tissues, and the lymph nodes; however, it can involve any other organs. It is usually seen before, during, or after the diagnosis of acute myeloid leukemia (AML); however, it is also seen in chronic myelogenous leukemia (CML) during blast crisis [2]. We report a rare case of soft tissue myeloid sarcoma in a patient with CML in the chronic phase (CP).

A previously healthy 16-year-old Asian male presenting with progressive blurry vision in both the eyes reported to the emergency department of our hospital. No other symptoms were reported, except for the pain in his right thigh. Fundus examination of both eyes showed multiple retinal hemorrhages. However, due to leukocytosis observed in complete blood counts, the patient was referred to the pediatric hematology department. On physical examination, marked splenomegaly as high as the left iliac fossa was noted on physical. Complete blood counts (CBC) revealed a hemoglobin level of 9.3 g/dL, platelet count of 443×109/L, white blood cell count (WBC) of 461×109/L, with differentials of 27% segmented neutrophils, 20% band cells, 3% lymphocytes, 3% eosinophils, 2% monocytes, 5% basophils, 8% metamyelocytes, 26% myelocytes, 5% promyelocytes, and 1% blasts. Bone marrow (BM) aspiration showed a hypercellular marrow with granulocytic and megakaryocytic lineage proliferation (Fig. 1). Based on these results, the patient was diagnosed with BCR-ABL1-positive chronic myeloid leukemia and treatment with imatinib was initiated. No other symptoms were observed, except nausea after the initiation of imatinib; however, on the third day of treatment, the myalgia on his right thigh worsened along with an increase in thigh circumference. Magnetic resonance imaging was performed, which showed a 12×6×4 cm heterogeneous lesion in the proximal portion of the vastus lateralis muscle in the right upper thigh (Fig. 2A). A needle biopsy was performed and pathologic examination revealed the presence of myeloid sarcoma with hematoma. Positron emission tomography–magnetic resonance imaging (PET-MRI) showed a large mass with a central metabolic defect indicating increased fluorodeoxyglucose (FDG) uptake in the right thigh and splenomegaly, while a diffused FDG uptake was observed in the bone marrow of his entire skeleton (Fig. 2B). On the 14th day of imatinib treatment, his WBC count was reduced to 104×109/L, along with a decrease in the size and pain in the right thigh mass. After one month of treatment, his CBC normalized and his thigh mass disappeared. He achieved complete hematologic response after 3 months of treatment and follow-up MRI and PET-MRI done six months after treatment showed only a healed scar on MRI (Fig. 3A) and a significant reduction in the intensity of PDG uptake on PET-MRI (Fig. 3B). 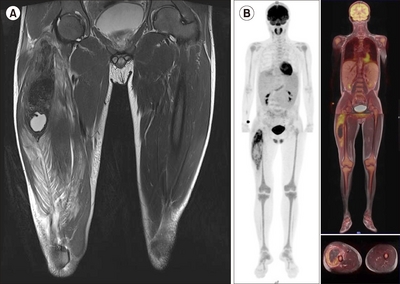 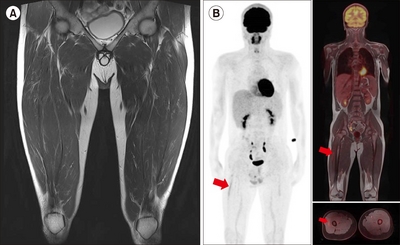 MS is a tumor mass consisting of immature myeloid blasts occurring at an anatomical site other than BM [3]. MS mostly occurs during the accelerated phase or the blast phase in the BM and peripheral blood (PB) in the presence of CML while rarely occurring in the CP. Further, CML in its initial phase of medullary CP very rarely presents as MS.

Chen . [4] reported 11 cases of MS with an initial presentation of CML in the medullary CP. Until now, only several cases of MS as the initial presentation of CML in medullary CP have been reported. Zhou . [2] conducted a retrospective review of clinicopathologic and cytogenetic data from 33 pediatric patients with MS (ages 1 mo–18 yr) over 32 years (1984–2016). According to their results, most MS patients had concomitant or recurrent AML. Only 1 of the 33 patients had atypical CML, with the skin as the most common site of MS involvement [2].

In our patient, MS was asymptomatic at the time of CML diagnosis. However, after the initiation of imatinib, a hematoma developed in the tumor causing stretching of the muscle and associated pain. The pain caused by the increased thigh circumference led to the diagnosis of MS. MS is usually accompanied by AML or CML in the blast phase and pathologically consist of myeloid blasts similar to those in AML. However, in our case, it developed in the chronic phase of CML and was composed of all myeloid lineages.

Whether this difference affects the treatment outcome of MS is unclear because very little is known about the prognosis of MS; however, in our review of other cohort studies, we noted that MS in the chronic phase has a better prognosis than in the blast phase. Further, there is no consensus in the treatment of MS because of a scarcity of randomized trials. MS as the initial presentation of CML-CP may be a unique subset of CML and the prognosis is unclear due to the rarity of the disease. However, considering that the treatment of MS is based on chemotherapeutic protocols of underlying leukemia, the prognosis of our case is expected to be better since the chronic phase of CML is well controlled with only imatinib treatment. Further, in the tyrosine kinase inhibitors (TKI) era, the overall survival of CML in the medullary blast phase (BP), as well as CML patients with MS, has improved [4].

A study by Dasappa . [5] found that only 8 of 615 CML-CP cases they studied developed MS. The median age of presentation was 43 years with a male to female ratio of 1.7:1, indicating a predominance in males. Seven cases showed soft tissue deposits as sites of presentation while two cases showed lymph nodes. Further, the study showed a better prognosis for MS in medullary CML-CP than for MS in medullary CML-BP. Their results indicate that due to the rarity of the presentation, MS presenting in soft tissues might be overlooked as an infection/hematoma, unless proven otherwise [5].

Chen . [6] suggest that MS with medullary BP and MS have different biology at initial presentation and thus have different prognoses. Hence, they insist that MS in the initial stage of CML may not necessarily have treatment resistance and disease progression as indicated by MS or BP which are the late sequela of CML.

Most commonly, MS occurs concurrently or during AML or sometimes during the recurrence of AML. In children, MS is found in AML and the most commonly involved site is the skin [2, 7].

The treatment guidelines for MS are unclear in both children and adults. Prospective clinical trials are rare and most of the therapeutic regimens are based on retrospective studies that have focused on adults. Patients diagnosed with MS with BCR-ABL1 positive CML can benefit from kinase inhibitor therapy while considering subsequent allogeneic hematopoietic stem cell transplantation [7]. However, there is a lack of research on the prognosis due to the rarity of the disease and more data on these cases need to be assessed.

In conclusion, we report a case of coexisting MS with CML-CP in a 16-year-old male at the time of diagnosis. To the best of our knowledge, this is the youngest reported case of CML-CP with MS . The prognosis and treatment protocol for such cases is uncertain because of scarcity of studies owing to the rarity of the disease. Today, TKI therapy is widely used because of improved survival outcomes [4]. These patients will also need to be monitored regularly while being treated with a TKI.

This study was supported by a grant from 2019 Yeungnam University Research Grant.