It is well known that translocations and V617F mutations are mutually exclusive events in myeloproliferative neoplasms (MPN) [1]. However, the coexistence of both abnormalities has been reported in several cases [1, 2, 3, 4, 5, 6]. Until now, two studies have reported the co-occurrence of translocation and V617F mutation in Korea [3, 4]. Here, we discuss the clinical significance through a literature review, especially focusing on cases reported in Korea with a case presentation.

A 68-year-old woman was admitted with increased hemoglobin (Hb) and leukocyte count. Complete blood count (CBC) at admission showed the following: white blood cells, 17.06×109/L; Hb, 17.3 g/dL; and platelets, 245×109/L. Peripheral blood smear demonstrated leukoerythroblastosis with the presence of few tear drop cells. Differential counts of leukocytes were as follows: myelocytes 1%, metamyelocytes 1%, neutrophil 84%, lymphocytes 9%, monocytes 4%, eosinophil 1%, and rare nucleated red blood cells. Her serum lactate dehydrogenase level was elevated (313 IU/L, reference range, 0–250 IU/L) while her serum erythropoietin level was decreased (3.06 mIU/L, reference range, 3.7–37.5 mIU/L). An abdominopelvic computed tomography showed splenomegaly. We could not acquire sufficient information from the bone marrow aspirate, because it was diluted. However, bone marrow biopsy revealed hypercellularity and a slightly increased number of megakaryocytes (3.4/high power field) with dense clustering and certain degree of atypia (Fig. 1). Diffuse myelofibrosis, with bone marrow fibrosis (MF) grade 2, was detected (Fig. 1). Reverse-transcriptase PCR (RT-PCR) assay for the fusion transcript showed the presence of a major fusion transcript (b13a2 type), which was confirmed by sequencing (Fig. 1). The fusion transcript level was 1.23% on the international scale (IS). An allele-specific PCR assay for the V617F mutation was positive for a heterozygous type V617F mutation with an allelic burden of 79.20%, which was confirmed by sequencing (Fig. 1). The chromosomal analysis revealed 46,XX karyotype[20]. Interphase fluorescent hybridization for translocation was nuc ish (ABL1, BCR)×2 (ABL1 con BCR×1) [13/500], representing a normal result (below the cutoff level). The final diagnosis revealed MPN, with concurrent V617F mutation and major translocation. The patient was only treated with hydroxyurea (500 mg, twice a day). After 10 months of treatment, her CBC became normal (5.35×109/L white blood cells, a Hb of 14.9 g/dL, and 185×109/L platelets) and transcripts level was 0.016% IS.

Detecting translocation and V617F mutation simultaneously at the time of diagnosis is a rare event. Recent studies have reported that about 0.2–0.5% of MPN patients are positive for both and V617F [6, 7]. It has been suggested that most MPN cases with concurrent and V617F consist of two unrelated clones [2, 6, 8].

The coexistence of these abnormalities may affect laboratory findings and patient diagnosis. Park et al. [3] reported two cases of MPN, with a relative V617F dominancy over transcripts. Their laboratory findings resembled essential thrombocythemia (ET) and primary myelofibrosis (PMF). Our patient showed a relative dominancy of V617F, with the laboratory diagnosis resembling PMF. In contrast, the case reported by Yi and Kim [4] showed relatively high levels of transcripts. Laboratory features of both CML and PMF were detected (Table 1). Soderquist et al. [8] have reported that coexistence cases show mixed megakaryocytes characteristics that include both dwarf megakaryocytes, seen in CML, and bulbous megakaryocytes, seen in PMF. Therefore, it is essential to perform tests for and V617F simultaneously with quantitation, in order to avoid misinterpretation and obtain an accurate diagnosis of MPN.

Another issue is the impact of molecular abnormalities on patient outcomes. Soderquist et al. [8] have reported that seven of 11 MPN patients with concurrent and V617F showed progression to myelofibrosis, suggesting that these patients are more prone to disease progression. The coexistence of two molecular abnormalities might accelerate the progression. Nevertheless, cases reported in Korea have shown successful responses without death, at the time of publication [3, 4]. However, data concerning the progression rate and survival of patients with concomitant and V617F mutations are currently insufficient.

In summary, it is important to recognize the possibility of the coexistence of a translocation and V617F mutation in MPN, because they can affect hematologic features and treatment strategy. However, it is unclear if MPNs with concomitant translocations and V617F mutations reflect a novel clinical entity with distinct features and outcomes. Further investigation with a large cohort is needed. 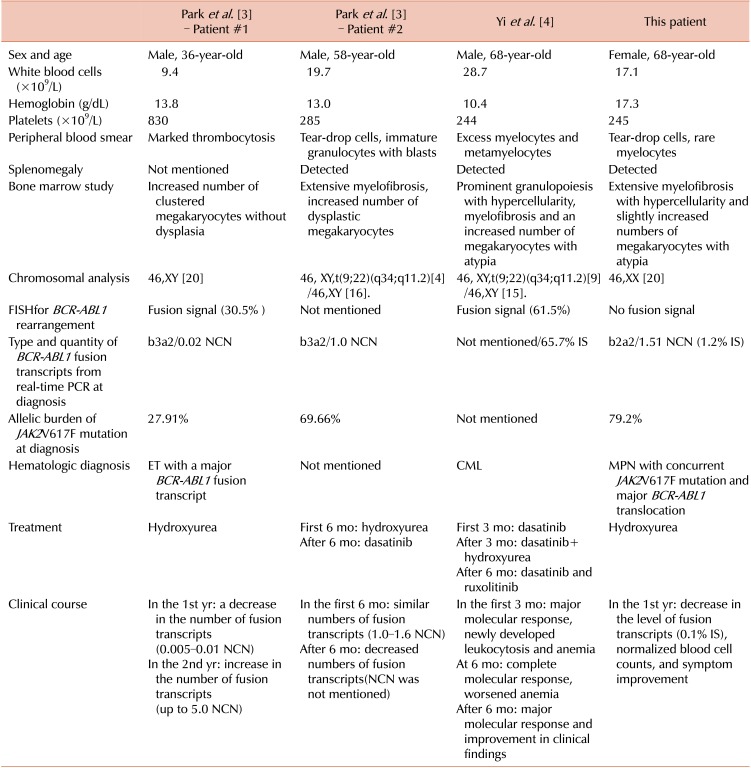