Based on the study results, blood donation in Iran reached >2 million units in 2017; moreover, it is predicted that Iran will achieve >29 donations per 1,000 population in 2022. The proportion of regular and repeated donors increased from 77% in 2013 to 87% in 2017. The average blood donation rate in seven provinces was higher than the national average, and the average growth rate of their blood donation per population was positive.

The results of the current study showed that there is a recent increasing trend toward blood donation in Iran. Furthermore, the largest share of donations is related to regular donors. The increasing proportion of regular and repeated donors has led to the improvement in the quality and consequently health level of donated blood.

Blood transfusion is the process of receiving blood from another individual (donor). It is an extremely safe procedure that can save millions of lives worldwide. Some of the main indications for blood transfusion are anemia, thalassemia, cancer, and trauma [1].

The World Health Organization (WHO) has always emphasized that the blood transfusion organization should be part of the healthcare system and independently monitor the blood donation process [2 3]. According to a WHO report, annually, approximately 112.5 million blood donations are conducted worldwide [4], which indicates the importance of monitoring blood donation systems.

Regarding the need for blood in Iran, a statistics survey shows that blood donation is always required in this country. Iran is one of the countries located in “the thalassemia belt” with a significant annual number of newborns with thalassemia [5]. Moreover, nearly 3% of all referrals to medical centers are reportedly related to injuries [6]. Hence, blood transfusion in Iran is an essential component of the healthcare system, saving millions of lives annually.

The history of the early attempts of blood transfusion in Iran can be traced back to the 1940s; however, approximately three decades later, in 1974, the Iranian National Blood Transfusion Service was founded. Presently, Iran has not only reached a 100% nonremunerated voluntary blood donation but also secured a national self-sufficiency in blood and blood components. In all provinces of Iran, there is at least one blood donation center, which collects donated blood, conducts screening to prevent transfusion-transmitted infections, stores the blood, and provides medical centers with safe blood [1].

This study used the data registered in the donor vigilance part of the Iranian Blood Transfusion Organization. This section covers all activities related to surveillance of blood donors throughout Iran independently. Data on each donor, such as age, sex, donation type, and blood type, were collected at blood donation centers in all provinces in Iran and were then sent to the Donor Vigilance Unit once a month. This unit integrates all data received from different provinces and saves them in electronic files by year.

The data included the number of donors, demographic status, donor type, blood group type, and deferral rate between 2003 and 2017 for each province. The data that were used in this study and made available to us were in the integrated Excel form.

The incidence variations and spatial autocorrelation were assessed between provinces using Getis-Ord Gi and Moran's I tests, respectively. This chart was created using the ArcMap GIS version 10.2 software. A -value <0.05 was considered statistically significant.

Another feature under consideration in this study was the type of donation. It was found that regular donors (donors with a gap of >12 mo between donations) were significantly more involved in donating blood than others. The results also showed the ratio of regular and repeated donors (donors with a gap <12 mo between donations) has increased from 77% in 2013 to 87% in 2017. The most frequent blood type among the donors was O+ and A+, with 34% and 27% of the total frequency, respectively. Therefore, this difference in blood types was also statistically significant (<0.001).

The study of blood donation deferrals indicated that, generally, about 20% of Iranian blood donors are temporarily or permanently deferred from blood donation (refer to Table 1 for more details).

The geographical distribution shows that, in provinces bordering the Caspian Sea, Persian Gulf, and Oman Sea and two provinces of Fars and Isfahan (center of Iran), the blood donation growth rate is positive, and the average blood donation rate is higher than the national average. Studies conducted on the distribution of certain diseases, such as beta thalassemia, in which blood transfusion is required, indicate that provinces bordering the Caspian Sea, Persian Gulf, and Oman Sea show the highest prevalence rate of these diseases in Iran. In a study published in 2007, these coastal provinces were among those with “very high” and “high” prevalence rates. Moreover, according to the latest report from the Iranian Legal Medicine Organization, Fars (south of Iran) is one of the provinces with the highest number of traffic accidents.

The distribution of donors showed that the ratio of regular and repeated donors has increased recently and has reached 87% in the previous year. In terms of general health status, they are mostly in good condition; additionally, they tend to avoid high-risk behaviors more than others, leading to recent improvement in the quality of donated blood. The blood group distribution of donors showed that the highest frequency of blood donation was noted in those with O+. The results of other studies also showed that the blood group O is more abundant than others [18 19 20 21 22]. It seems that this is the most common blood group worldwide.

Not all visitors for blood donation are qualified. To maintain the health of blood donors and recipients, some individuals are temporarily or permanently exempted. The results of this study showed that generally approximately 20% of visitors for blood donation are exempted. The studies already conducted in Isfahan (central Iran) and Shiraz (southwest Iran) reported this rate as 25.6% and 30.9%, respectively [23 24]. However, in countries such as Brazil, India, Turkey, and the United States, it was 22.5%, 9%, 14%, and 12.8%, respectively. The pattern of exemption is different in various countries. The reported pattern for Iran shows that the majority of exemptions (88.6%) are temporary and more focused on first-time donors (43%). Most exemptions aim to maintain the donor's health (69%) [23].

Based on the results of the current study, there is an increasing trend toward blood donation in Iran. Furthermore, the largest proportion of donations is related to regular donors. The increasing proportion of regular and repeated donors has led to the improvement in the quality and consequently health level of donated blood. Finally, more detailed data can provide more information for health policymakers to make appropriate decisions, so it is recommended that more features from blood donors should be considered in future studies.

F.Z, M.T.S, and A.S designed the study. M.T.S drafted the manuscript. M.T.S, F.Z, and M.R.B prepared and analyzed the data. AA.H and A.S clarified the content and revised the paper. The authors thank the Iranian Blood Transfusion Organization (IBTO) personnel.

This study was supported by Kerman University of Medical Sciences (Ethical Code: IR.KMU.REC.1397.401).

Tables
Table. 1. Characteristics of Iranian blood donors between 2013 and 2017. 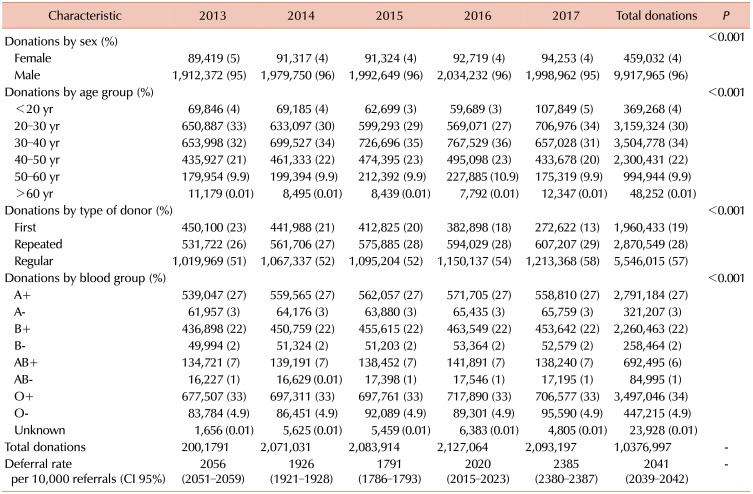