Lymphoplasmacytic lymphoma (LPL) with non-immunoglobulin M (IgM) paraproteinemia is a rare subtype of LPL [1]. Furthermore, the clinicopathological features and appropriate treatment regimen for non-IgM LPL have not been clarified. Non-IgM LPL reportedly has a higher rate of extramedullary involvement and poorer overall survival than IgM LPL-Waldenström macroglobulinemia (WM) [2]. Herein, we report two cases of successful treatment of non-IgM LPL using bortezomib (Bor)-containing regimen, in addition to a literature review.

A 71-year-old man was referred to our hospital with fever and abdominal pain for one month. The laboratory findings were as follows: white blood cells (WBC), 6.6×109/L; hemoglobin (Hb), 9.8 g/dL; platelet (PLT), 500×109/L; total protein (TP), 7.5 g/dL; albumin (Alb), 2.8 g/dL; lactate dehydrogenase (LDH), 195 IU/L; compensated Ca, 9.9 mg/dL; C-reactive protein (CRP), 6.28 mg/dL; IgG, 2363 mg/dL (normal range, 861–1,747 mg/dL); IgA, 147 mg/dL; and IgM, 41 mg/dL. Serum protein electrophoresis demonstrated an M-spike in the gamma fraction, and the serum immunofixation test revealed monoclonal bands of IgG and kappa. A soft tissue mass in the mesenteric lymph nodes was observed on computed tomography (CT) (Fig. 1A). Bone marrow (BM) aspiration revealed abnormal increases in atypical small lymphocytes, lymphoplasmacytes, and plasmacytes. The biopsy specimen of the BM exhibited diffuse infiltration of atypical small lymphocytes, lymphoplasmacytes, and plasmacytes (Fig. 2A). On immunohistochemical staining, the atypical lymphoplasmacytes and plasmacytes were positive for CD138 (Fig. 2B); however, CD79a, IgG-kappa, and CD20 expression was weak (Fig. 2C). Conventional cytogenetic analysis of the BM aspirate demonstrated a normal karyotype, and fluorescence hybridization (FISH) analyses for translocations involving immunoglobulin heavy chain, including IgH-BCL1, chromosome (chr) 13q deletion (del), and chr 6q del, were negative. Thus, the patient was diagnosed with LPL with IgG-kappa M protein, accampanying B symptoms and a mesenteric mass. The patient was categorized as having an intermediate risk according to the international prognostic scoring system for WM [3]. He was treated using BDR therapy [4], which was modified for the Japanese health insurance system: one cycle of subcutaneous injection of Bor (1.3 mg/m2); oral dexamethasone (Dex, 20 mg) on days 1, 2, 4, 5, 8, 9, 11, and 12; and rituximab (R, 375 mg/m2) on day 11. For induction therapy, four cycles were repeated every three weeks, followed by four more cycles for maintenance therapy three months apart (Table 1). In this case, R was omitted because of the weak expression of CD20 in the neoplastic cells. After the first cycle of BD(R) therapy, fever and abdominal pain promptly disappeared. After four cycles of BD(R), the serum IgG level decreased to within the normal range, serum M-protein became undetectable by the immunofixation test, and the soft tissue mass was not visible on CT. Thus, the patient achieved a complete response (CR) according to the 6th International Workshop of WM response criteria [5], and the CR has been maintained for six months.

A 59-year-old man was refered to our hospital with anemia in 2006. The laboratory findings were as follows: WBC, 4.0×109/L; Hb, 7.9 g/dL; PLT, 330×109/L; TP, 8.5 g/dL; Alb, 3.2 g/dL; compensated Ca, 8.9 mg/dL; IgG, 4,135 mg/dL; IgA, 55 mg/dL; IgM, 42 mg/dL; and beta 2-microglobulin, 5.1 mg/L. Serum creatinine level was within the normal range, and proteinuria was not recognized. The serum protein electrophoresis showed an M-peak in the gamma fraction, although serum immunofixation test was not performed. The BM aspirate showed myeloma at that time; hence, he was initially diagnosed with symptomatic IgG myeloma. He was treated with two cycles of VAD therapy [28 days cycles of vincristine (0.4 mg/kg) with doxorubisin (9 mg/m2) by continuous intravenous infusion for 4 days, and dexamethasone (40 mg/kg) by intravenous infusion for 4 days] as an induction treatment, by which he achieved partial response. The patient had his first recurrence in 2009 and received BD therapy consisting of Bor and Dex [6] and achieved a very good partial response. In 2014, enlargement of the mediasinum without any symptoms was noted on a chest X-ray. The CT showed a mediastinal mass (Fig. 1B), slight enlargement of the post-peritoneal lymph nodes, and moderate splenomegaly. The biopsied specimen obtained from the mediastinal mass exhibited diffused infiltration of small- to medium-sized atypical lymphocytes with plasma cell differentiation (Fig. 2D). On immunohistochemical staining, the atypical lymphocytes were positive for CD20 (Fig. 2E), whereas atypical lymphoplasmacytes and plasmacytes were positive for CD138 (Fig. 2F). The serum immunofixation test demonstrated dual monoclonal bands of IgG-kappa and IgG-lambda. BM aspirate revealed diffuse infiltration of small lymphocytes, lymphoplasmacytes, and plasmacytes. G-banding of the BM aspirate resulted in 46 and XY. FISH analyses for IgH-BCL1, chr 13q del, and chr 6q del were negative. L265P mutation was also negative. Furthermore, reconfirmation of BM aspirate obtained in 2006 revealed that the neoplastic cells were composed of atypical small lymphocytes, lymphoplasmacytes, and plasmacytes. Therefore, the precise diagnosis was revised from IgG myeloma to IgG LPL after re-evaluation. After local radiation therapy (36 Gy/17 Fr), the mediastinal tumor disappeared, and the patient had no symptoms at that time. The patient was followed under close observation without administering any systemic chemotherapy. He has not received chemotherapy for 10 years after BD therapy and is alive 13 years after the initial diagnosis.

LPL is a neoplasm of the small B lymphocytes, lymphoplasmacytes, and plasmacytes involving the BM, lymph nodes, and the spleen. Conversely, WM is defined as LPL with BM involvement and IgM monoclonal gammopathy [1, 7]. Recently, many cytogenetic and molecular analyses regarding the pathogenesis of LPL/WM have been reported. Chr 6q del was found in approximately 30–50% and was reported to be one of the poor prognostic factors [8]. L265P mutation was noted in approximately 90% of WM cases, and the mutation is widely accepted as the major mechanism for oncogenesis [9]. Conversely, <5% of LPL cases have IgG, IgA, light chain, or no paraproteins. Due to its rarity, reports on clinicopathological features and treatment outcomes of non-IgM LPL are limited [2, 10, 11, 12, 13].

Regarding the treatment outcomes, the Asan Medical Center and MDACC groups reported that non-IgM LPL had poorer survival than IgM LPL/WM [2, 10]. The Asan Medical Center group reported a median progression-free survival (PFS) and overall survival (OS) of 5.8 and 10 months, respectively [2]. According to the MDACC group, the 1-year mortality rate was 23.5% for non-IgM LPL, whereas that for IgM LPL/WM was 2.2% [10]. Recently, treatments for IgM LPL/WM have markedly changed because many therapeutic agents have been developed [14, 15]. Olszewski et al. reported 681 patients aged ≥65 years for whom the first-line R-based therapy was initiated from 2008 to 2014 in the US [14]. Of them, 58% received R alone, 22% received chemo-immunotherapy, 11% received a Bor-containing regimen, and 9% received a bendamustine (Benda)-containing regimen. They also noted that the proportion of Bor- or Benda-containing regimens significantly increased between 2008 and 2014, although there was no significant difference in the OS between immune-chemotherapy with classical agents and Bor- or Benda-containing regimens. A recent report from the Bing Center for WM retrospective analysis in the US has shown a similar response and long-term survival with Bor- or Benda-containing regimens, although the toxicity profile was different. Bor-containing regimen could induce neuropathy, while Benda-regimen could be associated with a risk of secondary leukemia; therefore, Bor-containing regimen is preferred in relatively younger patients [16].

In conclusion, non-IgM LPL commonly has an extramedullary mass and a low incidence of mutation due to the heterogeneous disease entity. Regarding treatment outcomes, Bor-containing regimens may lead to a favorable outcome than classical immuno-chemotherapy in non-IgM LPL. However, further studies are warranted.

Computed tomography at diagnosis. A soft tissue mass in the mesenteric lymph nodes in Case 1. A bulky mass in the mediastinum in Case 2.

For induction therapy, 4 cycles were repeated every 3 weeks, followed by 4 more cycles for maintenance therapy every 3 months. 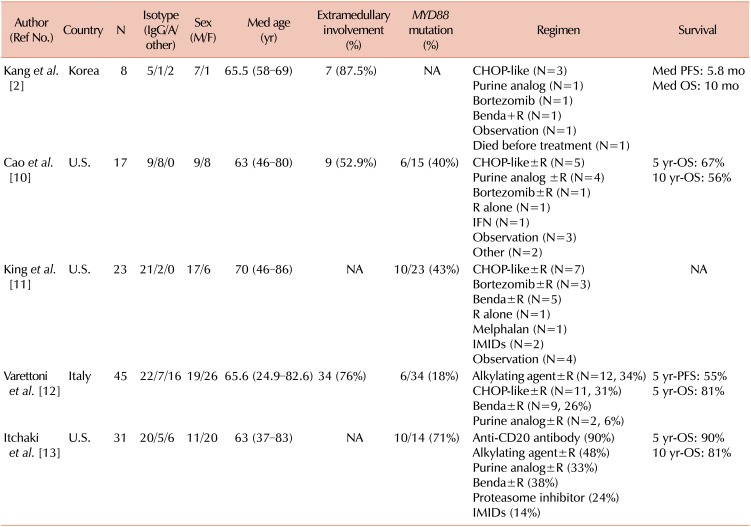