BCR/ABL-negative or atypical chronic myeloid leukemia (CML; aCML) is a rare hematologic malignancy with an estimated incidence of 1–2% among all BCR/ABL-positive CML cases [1, 2]. Due to its rarity, no prospective study has been conducted to optimize a treatment strategy for BCR/ABL-negative CML; consequently, BCR/ABL-negative CML is managed with palliative therapy. A population-based study on aCML outcome is rare. Thus, aCML characteristics and outcomes were analyzed using the National Health Information Database (NHID) [3, 4].

Patients diagnosed with aCML (International Classification of Diseases, Tenth Revision, C922) between 2004 and 2015 were included. Patients 1) aged <20 years, 2) who received chemotherapy before the aCML diagnosis, and 3) for whom C922 was recorded just once during the follow-up period were excluded. Data on age, sex, insurance premiums imposed on patients proportionate to their income, location of the medical institution, transfusion history, prescription list, and date of death were collected. The cut-off date was December 31, 2017. Overall survival (OS) was calculated using the Kaplan–Meier method. The Cox proportional hazard regression model was utilized to determine OS predictors. Statistical analyses were conducted using the SAS version 9.2 (SAS Institute, Cary, NC, USA). The institutional review board of Wonju Severance Christian Hospital waived the need for informed consent because of the retrospective design of the study.

Over 11 years, only 54 patients with aCML were identified (Table 1). The median age at diagnosis was 73 (26–90) years. The age distribution was as follows: ≤65 years, 15 (27.8%) patients, and >65 years, 39 (72.2%) patients. About 65% (N=35) of patients were men. Thirty-five patients (64.8%) were paying high insurance premiums, and 20 (37%) were treated at a medical institution located in Seoul (Capital). Most patients received transfusions (91%), 59% (N=32) needed both red blood cell (RBC) and platelet transfusion, and 31.5% (N=17) received RBC transfusion only. The median 2.6 (0.2–8.5) pack of RBCs were transfused every month. Hydroxyurea was administered to 93% of patients. Seven patients (13%) received decitabine, and 8 (14.8%) received cytarabine. No patients received azacitidine or underwent hematopoietic stem cell transplantation (HSCT). Five patients (9.3%) progressed to acute myeloid leukemia (AML) after a median of 5 (1–30) months after the diagnosis. Characteristics (age, sex, income, institution location, transfusion, and medication) of patients who progressed to AML were not different from those of patients who did not progress to AML (data not shown).

Prognostic factors of OS were analyzed using Cox proportional hazard ratios with the following variables: sex, age, income, and location of the medical institution. Only age was a significant predictor of OS in both univariate and multivariate analyses. Patients aged >65 years were at 2.68-times higher risk of death than those aged ≤65 years (=0.0088) (Table 2, Fig 1B).

Age >65 years, female sex, hemoglobin levels of <10 g/dL, and leukocyte count of >50×109/L have been described as negative predictive factors of OS [5, 7]. As shown in Table 2, the median survival in women was worse than that in men (7 vs. 11 mo). However, this was not significant in both univariate and multivariate analyses in this study. Only old age (>65 yr) was consistently associated with poor OS in this analysis. The natural history of aCML is characterized by increases in leukemic cell burden, organomegaly, anemia, and bone marrow failure with AML transformation in 30–40% of cases [5, 7, 8, 9]. In this study, few patients progressed to AML (9.3%). Similarly, Patnaik et al. reported a leukemic transformation rate of 8% [10]. Although no long-term survivor was observed in patients who progressed to AML, AML progression did not affect OS. We could not find any predictive factor for AML progression, which may be due to the small number of patients.

Because of poor prognosis, allogeneic HSCT is considered as the only curative treatment to improve OS. Koldehoff et al. described favorable outcomes, with a 5-year OS of >80%, in 24 patients who underwent allogeneic HSCT [13]. Conversely, Mittal et al. described worse outcomes because of high transplant-related mortality due to graft-versus-host disease, sepsis, and other causes [14]. In this study, no patients underwent allogeneic HSCT. Patients were mainly treated with hydroxyurea and blood product transfusion. Recent studies have suggested potential therapies to target different genetic alterations, such as ruxolitinib for mutations and dasatinib (SRC kinase inhibitor) for CSFR truncation mutations, in which downstream signaling is predominantly operated through SRC kinase [15]. Thus, identification of new targets, development of novel therapies, improvement in transplant techniques, and selection of appropriate candidates for allogeneic HSCT will help in improving aCML outcomes.

This study had limitations because blood counts, bone marrow aspiration findings, and cytogenetic or genetic alterations were not available. Therapeutic effects or differences in clinical feature at presentation were unknown. However, a relatively large number of patients with this rare disease could be included using the NHID. Our results may provide background information for clinical trials in the future.

Kaplan–Meier plot of 52 patients with atypical chronic myeloid leukemia. The OS of 5 patients who progressed to AML (dotted line) was not different from that of those who did not progress to AML (solid line, N=49, =0.6839). Patients aged ≤65 years (dotted line) showed better OS than those aged >65 years (solid line, =0.0053). 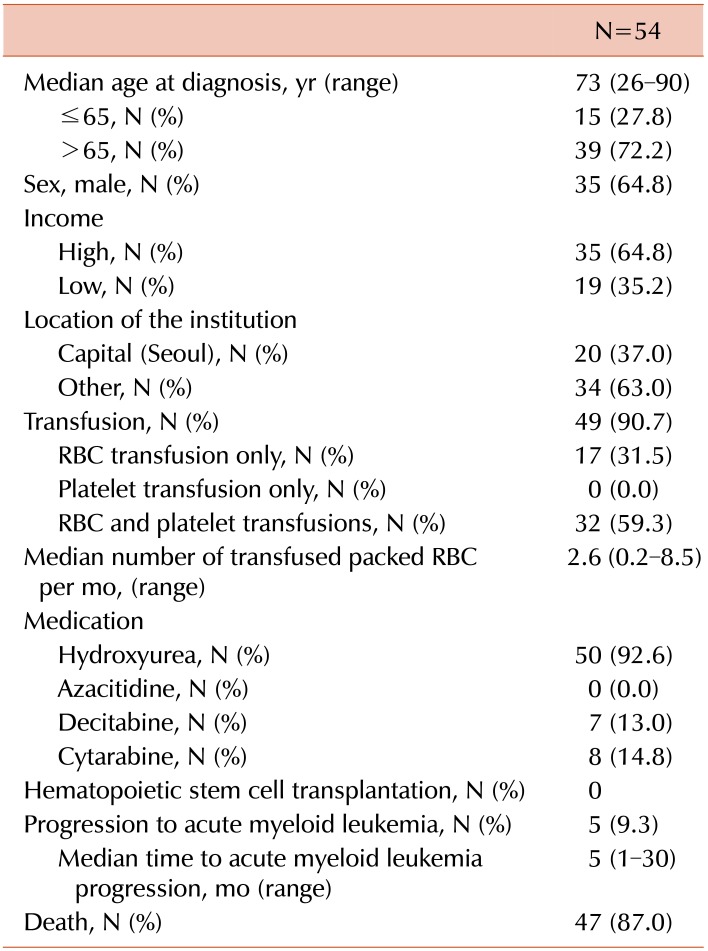