Participants were patients at a hemophilia treatment center in Korea with current or past history of factor VIII or factor IX alloantibodies. Observed inhibitors were classified as PUP or PTP inhibitors based on the cumulative number of exposure days. We compared the type and severity of hemophilia, mutation type, and family history of inhibitor between PUPs and PTPs. Events within 3 months before the first inhibitor detection, such as change of the factor concentrate used, short-term high exposure or continuous infusion of factor concentrate, history of surgery, infection, diagnosis of cancer, use of immunosuppressive or immunomodulator agents, and vaccination were compared between PUPs and PTPs.

Our results suggest a greater role of nongenetic factors in PTP inhibitor development.

Since it was first reported by Lawrence and Johnson in 1941, development of alloantibodies to factor VIII (FVIII) or factor IX (FIX) remains a great problem in the treatment of hemophilia [1]. This condition makes bleeding control difficult and hinders prophylactic treatment; therefore, more arthropathies and disabilities are observed in patients with such inhibitors. Furthermore, the cost of treatment becomes greatly increased mainly due to the high cost of using bypassing agents [2]. Inhibitors develop in approximately 30% of patients with hemophilia A (HA) and 1–3% of those with hemophilia B. Most inhibitors develop in patients with severe hemophilia who have mutations causing a CRM-negative state during the first (early) exposure days (EDs) to FVIII or FIX. However, inhibitors rarely develop after the first 150–200 EDs [3, 4, 5]. In reference to this observation, the International Society on Thrombosis and Haemostasis (ISTH) has defined inhibitors that develop after 150 EDs as previously treated patient (PTP) inhibitors [6].

This study included patients at a hemophilia treatment center in Korea (Eulji University Hospital) who had a current record or history of alloantibodies to FVIII or FIX. Information on history of inhibitors was obtained from medical records of all patients with hemophilia registered in Eulji University Hospital from 2000 to 2018. An inhibitor titer above 0.6 Bethesda Units (BUs) was defined as positive. Only inhibitors with positive titers on two occasions were considered.

For each patient with an inhibitor, the cumulative number of EDs to FVIII/FIX concentrates before inhibitor development, the dates of detection and titers of the first two positive inhibitors, and the date of resolution of inhibitors were collected from medical records and patient diaries. The cumulative number of EDs was evaluated up to 200 EDs. When inhibitors were observed after 200 EDs, treatment years with clotting factor concentrates before inhibitor development were evaluated instead of EDs.

Prevalence of inhibitors in patients with hemophilia

Risk factors for inhibitor development in PTPs with hemophilia A

Events that might be related to the development of inhibitors within 3 months prior to the first inhibitor detection were observed in all 5 PTPs. On the contrary, no such events were observed in any PUPs. The observed events included a change in the factor concentrate used, one case of colon cancer surgery and subsequent chemotherapy, short-term high exposure to factor concentrates for controlling intra-abdominal hemorrhage and emergency splenectomy caused by a car accident, and orthopedic surgery (a knee arthroplasty and a right ankle osteotomy and synovectomy) (Table 3). Three PTP inhibitors, all high-responding inhibitors, were observed in three siblings with SHA who had been treated on-demand. Inhibitor developed at age 55 years in one brother after short-term high exposure to factor concentrates for the control of intra-abdominal hemorrhage and emergency splenectomy after a car accident, another brother developed inhibitor at age 65 years after colon cancer surgery and chemotherapy. A third brother developed inhibitor at 70 years old after right knee arthroplasty. The observed mutation among these family members was the Arg1997Trp missense mutation, which has been reported as a mutation in moderate and SHA. Other mutations observed in PTPs were one frame shift mutation with small deletions and one inversion 22 in each patient. The mutations observed in PUPs were one multi-exon deletion, two stop mutations, one inversion 22 mutation in patients with SHA, and a missense mutation observed in a patient with mild HA (Table 3).

It is known that most factor of VIII/IX inhibitors arise after relatively few EDs to factor VIII, early in the patient's life in severe and moderate hemophilia; after 150–200 EDs, the subsequent risk of inhibitor development is very low [3, 4, 5, 6, 7]. Based on this observation, the ISTH has differentiated inhibitors as PUP inhibitors and PTP inhibitors [6].

The mechanism for the development of inhibitors in PTPs is unknown, except in the case of new FVIII antigen exposure owing to a change in antigenic factor concentrates. The risk of new FVIII antigen exposure in PTPs was first witnessed in Austria and the Netherlands after exposure to new plasma-derived pasteurized FVIII concentrate (FVIII CPS-P) during 1990–1991 [16]. This was also observed after the introduction of recombinant factors in the early 2000s, although the incidence was very low in PTPs (0–1.2% of the cohorts under investigation) [11, 12]. In addition to the known risk of new antigen exposure, presumably, a breakdown of previous tolerance may be another mechanism for the development of inhibitors in PTPs because these patients have had many hundreds of FVIII EDs. This breakdown of tolerance may reflect circumstances (danger signals such as surgery and intensive replacement therapy) and/or deterioration in immune regulation with advancing age. Anecdotal evidence suggests that these inhibitors frequently arise after intense replacement therapy during surgery or to control bleeding (“peak treatment moments”), a risk factor that has been established in children with SHA and patients with mild HA [17, 18]. Thus, nongenetic factors that would break down tolerance may contribute to the development of PTP inhibitors more than genetic factors. However, only a few studies on this issue have been conducted among PTPs; furthermore, nongenetic factors that would lead to the breakdown of tolerance were not included in most of these studies. Consequently, no risk factors, except the previously known risk of new antigen exposure, have been elucidated [11, 12].

In this study, anecdotal events that might be related to the development of inhibitors in PTPs were observed in all 5 PTPs with inhibitors. On the contrary, no such events were observed in any of the 5 PUPs with inhibitors. The observed events were a change in factor concentrate, colon cancer surgery and chemotherapy, trauma due to a car accident and subsequent short-term high exposure to factor concentrate, and orthopedic surgery (Table 3). Except for one case of new antigen exposure, all the other events may have contributed to the breakdown of tolerance to FVIII. Although our study population included a small number of cases at a single center, these results suggest that nongenetic factors may contribute to the development of inhibitors to a greater degree in PTPs than in PUPs because patient-oriented factors, such as hemophilia severity and mutation types, were not different between these groups (Table 3).

Despite these findings, reflecting the anecdotal risk factors of inhibitor development in patients with mild and moderate HA [18], some patient-oriented factors, such as family history of inhibitor and certain high-risk mutations, may presumably contribute to the development of PTP inhibitor. For example, 3 PTP inhibitors, all high-responding inhibitors, were observed in three brothers with SHA in this study. They had been treated on-demand for years, and inhibitors developed over age 55 years after events such as surgery, chemotherapy, and trauma with subsequent short-term high exposure to factor concentrate. The observed mutation among these family members was the Arg1997Trp missense mutation, which has been reported in moderate and SHA [19]. This finding suggests that there may be certain high-risk F8 gene mutations and/or immunologic genetic factors in patients who are prone to developing PTP inhibitors. This may lead a patient with HA to break down tolerance easier than other patients, when nongenetic risk factors are superimposed on genetic risks, with subsequent PTP inhibitor development. Arg1997Trp may be such a high-risk mutation for the development of PTP inhibitor in patients with HA. However, this mutation has not been reported as a high-risk mutation, and neither type of inhibitor has been previously reported in patients with this mutation [19]. Therefore, this should be confirmed in studies including more patients who have this missense mutation.

The present study was conducted in a relatively small number of patients at a single center in Korea. Thus, it is necessary to conduct national study in Korea to confirm the bimodal risk of inhibitor development during a patient's life, especially for the later peak of inhibitors, most of which developed in PTPs. Although our study findings suggest a greater role of nongenetic factors in inhibitor development among PTPs, a national study would serve to confirm these findings.

Tables
Table. 1. Prevalence of inhibitors in patients with hemophilia. 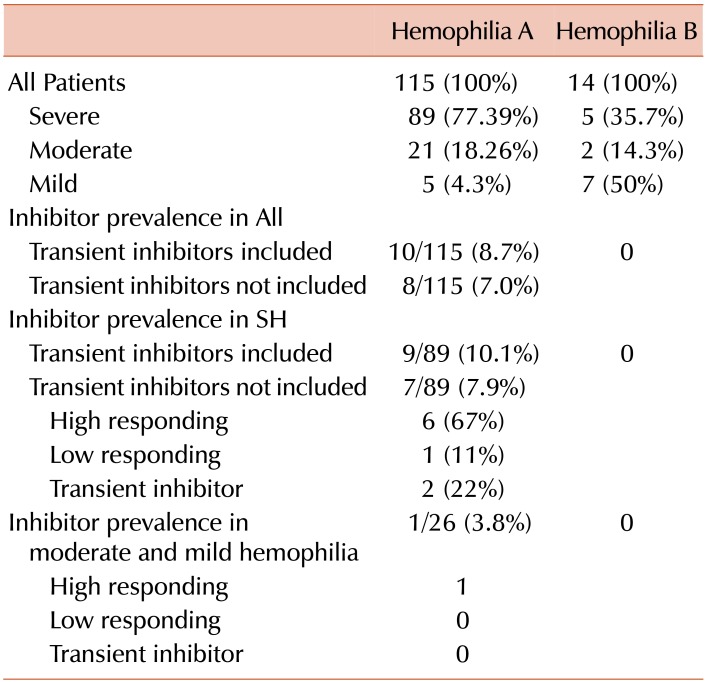 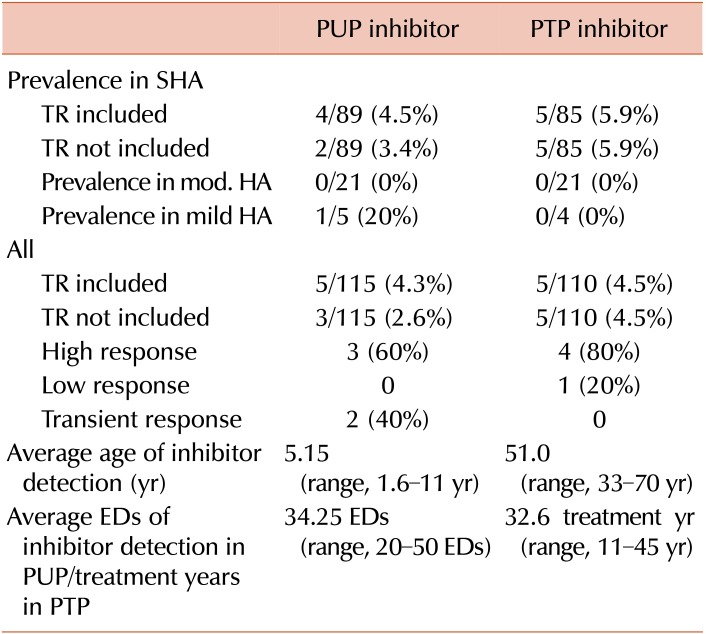 a)Events within 3 months before inhibitor detection.

No 1. Inhibitor detected at 32 years old and detected at 35 EDs after changing to EHL (extended half-life) FVIII.

No 2. Inhibitor detected at 65 years old after rectosigmoid cancer resection and chemotherapy.

No 3. Inhibitor detected at 55 years old after treatment for hemoperitoneum and liver laceration due to car accident, controlled with plasma-derived FVIII.

No 4. Inhibitor detected at 70 years old after knee arthroplasty.

No 5. Inhibitor detected at 33 years old after Rt with ankle osteotomy with synovectomy and prophylaxis for physical therapy.