Medical records of children newly diagnosed with BAL or ALAL, based on the EGIL or the 2008/2016 WHO criteria, respectively, admitted at Chonnam National University Hospital in 2001–2017 were retrospectively reviewed.

Due to the rarity of the cases, future multicenter, prospective studies incorporating large number of cases are urgently warranted to identify the clinical, biologic, and molecular markers for the prediction of prognosis and determine the best tailored therapy for each patient.

Most cases of acute leukemia (AL) are classified as either myeloid or lymphoid lineage based on the expression of a set of antigens. However, there are cases of patients with blasts expressing both lymphoid and myeloid features at diagnosis, known as biphenotypic acute leukemia (BAL) or mixed-phenotype acute leukemia (MPAL) [1]. These divergent morphologic and immunophenotypic features may be uniformly present in one blast population (biphenotypic leukemia) or may be seen on distinct blast populations in a single patient (bilineal leukemia) [2].

The European Group for Immunological Classification of Leukemias (EGIL) proposed a set of diagnostic criteria for BAL. This scoring system was based on the number and degree of specificity of certain makers for myeloid or T/B lymphoid blasts [34]. In 2008, the new World Health Organization (WHO) criteria were proposed for the classification of acute leukemia of ambiguous lineage (ALAL), which include significant modifications of the diagnostic criteria for AL of mixed phenotype. Cases with no lineage-specific markers were designated as acute undifferentiated leukemia (AUL), which often express CD34, HLA-DR, and/or CD38, and sometimes TdT, but lack specific myeloid or lymphoid antigens [56]. A type of leukemia with blasts that co-expresses certain antigens of more than one lineage on the same cells or that has separate populations of blasts of different lineages is referred to as MPAL. They can be further designated as B-myeloid or T-myeloid based on flowcytometric immunophenotyping, irrespective of whether one or more than one population of blasts was found. Thus, MPAL includes both biphenotypic and bilineal ALs. These WHO criteria were more stringent than those of the EGIL criteria and relied heavily on positivity for myeloperoxidase (MPO) [5]. In 2016, the WHO classification was updated but the criteria for ALAL remained unchanged [6].

The exact incidence of BAL or ALAL in childhood is unknown. The optimal therapy for this subtype of leukemia has not been established, especially in pediatric patients. Little is known about the prognostic implications of immunophenotypes of BAL [7]. The role of hematopoietic stem cell transplantation (HSCT) in first remission remains contentious [28910].

The present study aimed to retrospectively investigate the incidence and clinicopathological characteristics of pediatric BAL or ALAL patients in Gwangju and Chonnam province from 2001 to 2017.

In contrast to the EGIL approach of scoring a detailed blast immunophenotype with numerous markers, the WHO criteria emphasize a few key lineage-defining markers with particular emphasis on CD19 for B lineage, CD3 for T lineage, and MPO for myeloid lineage. The WHO approach is simpler but relies heavily on the sensitivity and specificity of a few markers. Moreover, the WHO classification does not specify thresholds for positivity of these key markers, leaving it up to individual laboratories to decide on the definition of significant expression [13]. In addition, the WHO diagnostic criteria defined AUL as a type of leukemia that does not involve the expression of those specific antigens and hence set up the classification of ALAL, including MPAL and AUL. In the present study, the incidence might have been underestimated as some immunological markers such as cyCD79a were not tested in our institute.

In the WHO 2016 diagnostic criteria, t(9;22)/+ positive and rearrangement were classified separately. Although MPAL was not associated with a consistent cytogenetic/molecular abnormality, the Philadelphia chromosome was the most common abnormality, with 17–41% incidence in BAL and MPAL patients with almost exclusively B-lymphoid/myeloid phenotype [71421]. was more common among adult MPAL patients (15%) than among pediatric MPAL patients (3%) [141522]. However, all + patients should be identified as quickly as possible because they may benefit from the addition of tyrosine kinase inhibitors (TKI) same as those with + ALL [122324].

MPALs may have worse prognosis than other types of leukemia. The proposed reasons were as follows: the mixed-phenotype leukemic stem cells are chemoresistant owing to slow replication, the blasts can adapt to therapy by switching phenotype, and some MPALs express high levels of multidrug resistance proteins [1226].

The issue of HSCT remains contentious. In this study, among 9 (75% of total cohort) patients who received an allogeneic HSCT, 5 (55.5%) survived. Among three patients who did not receive HSCT, only one survived. Our decision to proceed with transplant was primarily based on the availability of HLA-matched stem cell donor. The current study demonstrated a favorable outcome for patients transplanted in CR1. The post-allogeneic-HSCT outcome was much better than with post remission chemotherapy in a single institution (N=32, 3-year OS 77% vs. 16%) [28]. However, a Korean pediatric study reported no benefit from HSCT over chemotherapy alone in patients with BAL [8]. In general, similar outcomes have been reported between transplanted vs. non-transplanted cases, but the issues need to be clarified because of the lack of randomized study, due the small number and heterogeneity of patients, stem cell donor, and transplantation procedures. Thus, routine use of HSCT may not be required in patients with ALAL, especially in those who attain a molecular remission after induction therapy. However, still a significant portion of the patients may need a prompt HSCT. Some recommend that an HSCT should be reserved for the case of Philadelphia chromosome-positive MPAL, infants particularly those with 11q23 abnormalities and those who have a poor response to early therapy [2829]. However, whether older children with 11q23 abnormalities should also be transplanted remains unclear and require further evaluation using larger, possibly multi-institutional studies. Other risk-determining variables need to be included in this decision process [101229].

The prognostic implication of high leukocyte counts at diagnosis, and immunophenotypic subtype, expression of the specific antigen, as well as the selection of induction regimen and the use of HSCT in BAL or ALAL need to be further established in prospective, multicenter fashion. Pediatric ALAL may be distinct from its adult counterpart in terms of clinical and cytogenetic characteristics, and response to chemotherapy, even though they are extremely rare. With better understanding of novel mechanism and pathogenesis of these rare situations, the best therapeutic approaches including target therapy will be available in the future.

Flow diagram of the classification, treatment and outcome.

The 5-year Kaplan-Meier plot for () OS and () EFS for all biphenotypic acute leukemia patients.

The 5-year Kaplan-Meier plot of () OS and () EFS according to initial leukocyte count.

The 5-year Kaplan-Meier plot of () OS and () EFS for patients with T/myeloid and B/myeloid biphenotypic leukemia.

The 5-year Kaplan-Meier plot for () OS and () EFS for biphenotypic acute leukemia patients treated with chemotherapy alone and those treated with HSCT in first remission.

Tables
Table 1 Characteristics of the BAL or ALAL patients.

Table 2 EGIL or WHO diagnosis based on cytochemical and immunophenotype data. 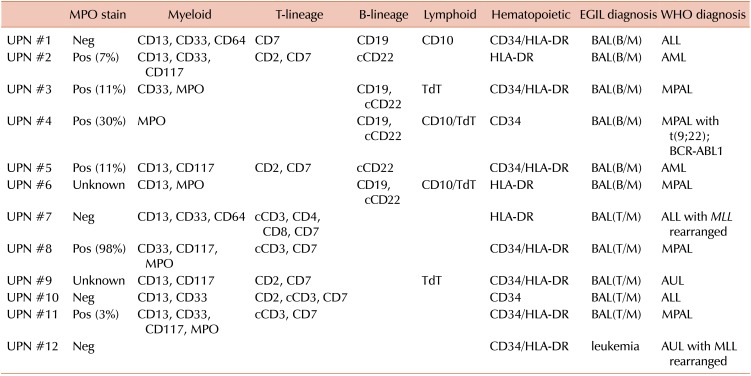 Table 3 Characteristics of the patients according to immunophenotype.

Table 4 Expression of cytochemical and immunological markers in BAL. 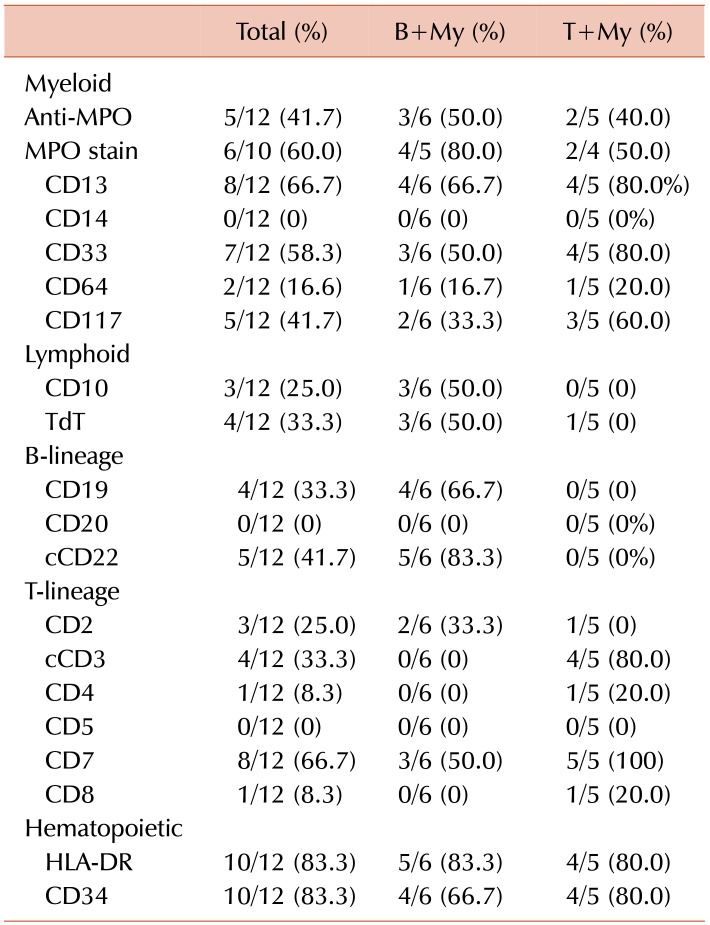 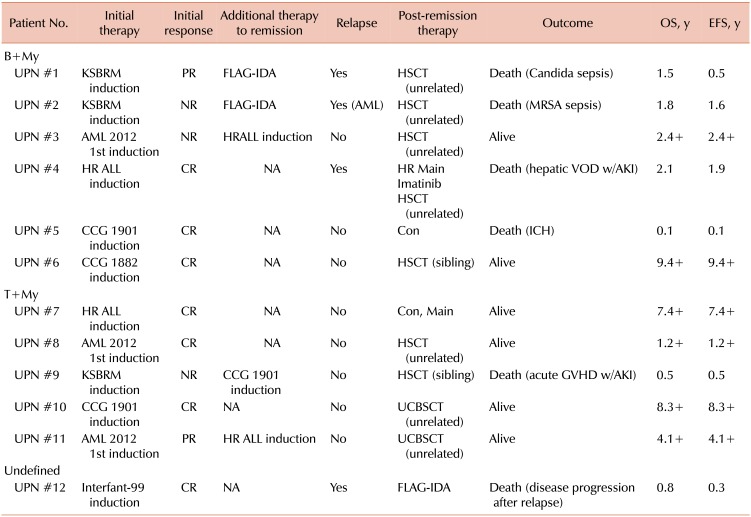