Department of Pediatrics, The Catholic University of Korea, Seoul, Korea.

Philadelphia chromosome-positive acute lymphoblastic leukemia (Ph+ ALL) is a subset of ALL with poor prognosis. Here, we analyzed the outcomes and prognostic factors of children with Ph+ ALL who received imatinib and chemotherapy followed by allogeneic hematopoietic cell transplantation (HCT) in first complete remission (CR).

Thirty-one Ph+ ALL patients (female 10) diagnosed from January 2005 to December 2016 were included in the study. All patients were treated with imatinib and chemotherapy before HCT. Bone marrow (BM) evaluations included real-time quantitative polymerase chain reaction (RQ-PCR) study of the fusion transcript. All patients received HCT with total body irradiation (TBI)-based conditioning at a median of 6.4 (range, 4.2–47.1) months from diagnosis.

Decrement in RQ-PCR for the transcript that was determined after consolidation was the only significant prognostic factor for incidence of molecular relapse. In the post-induction TKI initiation setting, steadfast imatinib treatment during consolidation may allow for optimum post-HCT outcomes.

Philadelphia chromosome-positive acute lymphoblastic leukemia (Ph+ ALL) comprises about 3–5% of pediatric ALL and is known to have inferior outcomes compared to other ALL subtypes [1]. Prior to the incorporation of targeted therapy, in the form of tyrosine kinase inhibitors (TKIs), such as imatinib, into the treatment scheme, the long-term event-free survival (EFS) reported from key studies was approximately 30%, with allogeneic hematopoietic cell transplant (HCT) recipients having superior outcomes compared with patients treated with chemotherapy only [23]. Subsequently, the introduction of imatinib therapy concurrently with conventional chemotherapy significantly improved the survival of pediatric Ph+ ALL patients, as has been shown in several prospective studies [4567]. Furthermore, an update of the initial Children's Oncology Group (COG) trial showed that patients who completed treatment with imatinib and chemotherapy only had an EFS comparable to those who subsequently underwent allogeneic HCT [8].

Our institution's strategy for the Ph+ ALL subgroup is to classify the patients as very high risk, administer imatinib with chemotherapy, and undertake allogeneic HCT in first complete remission (CR) from a matched sibling (MSD) or unrelated donor (MUD) [9]. Regarding imatinib and chemotherapy combination, studies from adult Ph+ ALL patients show that the decrement in minimal residual disease (MRD) as measured by real-time quantitative polymerase chain reaction (RQ-PCR) for the fusion transcript significantly influences outcomes [1011]. Prognostic factor studies in pediatric Ph+ ALL patients who were treated in the TKI era are few, with one study reporting that patients with additional cytogenetic abnormalities have lower survival [8].

Here, our aim was to show the outcomes of Ph+ ALL patients who were administered imatinib combined with chemotherapy, followed by allogeneic HCT in first CR at our institution, and to determine factors with prognostic significance. As well as clinical and transplant-related factors, we studied whether sequential RQ-PCR measurement of the fusion transcript identified patients with poor outcomes.

Here, we analyzed the outcome and risk factors for Ph+ ALL who underwent a joint imatinib-chemotherapy treatment, with subsequent allogeneic HCT in first CR. Our 5-year EFS and OS rates of 64.5±9.4% and 75.0±8.3% were similar to those reported by recent studies on this ALL subtype [812].

Favorable prognostic factors for children with Ph+ ALL treated in the pre-TKI era included clinical factors such as younger age, lower WBC count and favorable early BM response to remission induction chemotherapy [1314]. However, variables which influence patient outcomes after treatments combining TKI and chemotherapy remain unclear, with limited previous studies on this issue. The most recent report of the COG AALL0031 trial showed that patients with additional cytogenetic abnormalities besides the Ph chromosome had lower EFS while the level of MRD post-induction, as detected by flow cytometry, had no impact on survival [8].

Although the analysis was undertaken on a small number of patients, we found that none of the factors studied had a clear impact on EFS, while the decrement of the fusion transcript measured by RQ-PCR post-consolidation was the only significant factor for incidence of molecular relapse post-transplant, with patients achieving at least a −4 Log decrease while having lower incidence of relapse. Molecular relapse was analyzed as an endpoint here because an increase in the fusion transcript RQ-PCR value post-HCT, though does not correspond with a clear, morphological relapse, translates into the re-initiation of TKI therapy with both TKI-related complication and future relapse risks. The significance of the post-consolidation RQ-PCR value found in our study is similar to the transcript level prognostic value that was detected after the first 4 weeks of imatinib therapy after remission induction, which was reported to be important in a study of adult Ph+ ALL patients [11].

Regarding other prognostic factors, we found that patients with additional cytogenetic abnormalities had lower EFS and greater incidence of relapse than those with the Ph chromosome only, although not to the significant extent found in the COG study [8]. Variables that did not affect EFS or incidence of relapse significantly were also meaningful. For example, as with the COG study, we found that end-induction MRD did not affect outcomes [8], and that RQ-PCR value prior to HCT, and whether the patient achieved molecular remission prior to HCT did not affect post-transplant outcome. Donor type did not influence EFS, supporting a previous study on the acceptable outcomes of alternative donor transplant for pediatric Ph+ ALL [15]. Importantly, however, patients who received transplant from an HLA mismatched donor had inferior EFS, possibly due to an increase in NRM.

A clear limitation of our retrospective study is the differing consolidation chemotherapy treatment undertaken in a minority of patients, resulting in a lack of uniformity regarding the post-consolidation time point at which the RQ-PCR study was undertaken. We also draw attention to the high incidence of chronic GVHD, especially the 32.4% incidence of at least moderate chronic GVHD among our patients. Ph+ ALL may be susceptible to a graft-versus-leukemia effect, lowering the risk of relapse [16]. However, the undertaking of allogeneic HCT for cure of Ph+ ALL may have resulted in long-term morbidity in a subset of our patients.

Further research is necessary to improve the outcome of this poor prognosis ALL subtype. TKI therapy may be started during remission induction, as exemplified in the Spanish Cooperative Group SHOP study in which imatinib was administered from day 15 of remission induction onwards [5]. One study found that the introduction of TKI at day 22 of induction produced a major decrease in MRD levels and improved EFS, underscoring the utility of early TKI initiation in decreasing leukemic burden [17]. Another modification that may improve EFS is the administration of TKI post-HCT as maintenance treatment, a regimen that resulted in a 73% 5-year EFS in one pediatric study [18].

Second generation TKIs allow for better CNS penetration than imatinib. A recent study on dasatinib combined with chemotherapy for the treatment of Ph+ ALL showed survival outcomes similar to a cohort of patients treated with imatinib [19]. Importantly, this study showed that a subgroup of patients with IKZF1 deletion had significantly worse survival, emphasizing the role of this genetic mutation as a possible prognostic factor.

In summary, for our Ph+ ALL patients who started imatinib with chemotherapy post-induction and subsequently underwent allogeneic HCT in first CR, the magnitude of fusion transcript decrement during post-consolidation was the only significant factor for the incidence of molecular relapse after transplant. In the post-induction TKI initiation settings, steadfast treatment with imatinib during consolidation may allow for optimum post-HCT outcomes. 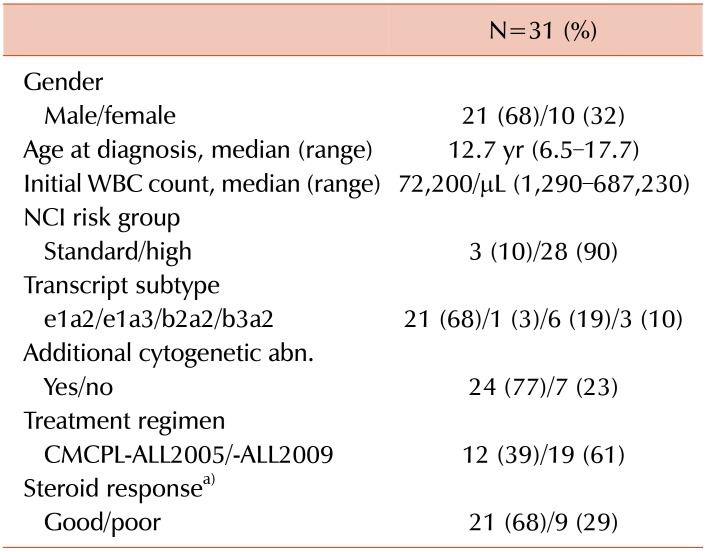 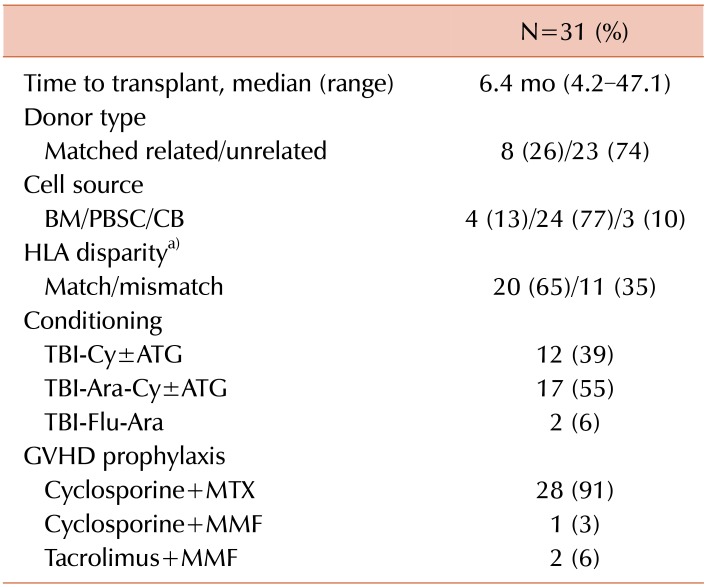 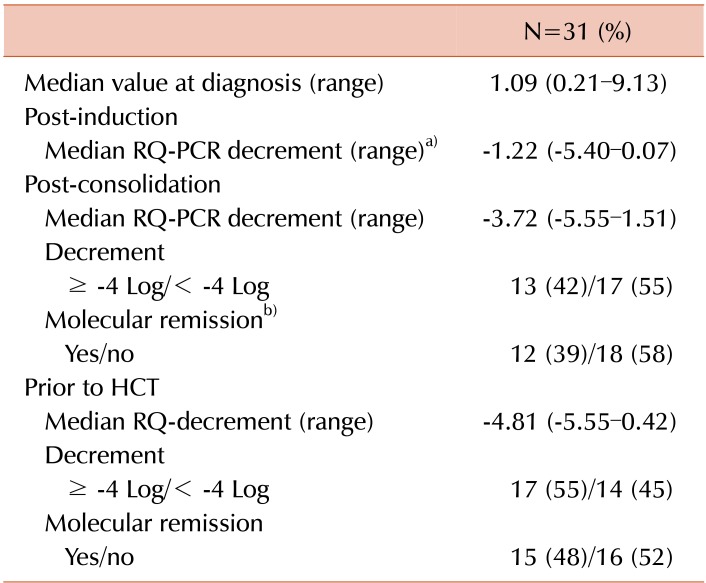 Table 4 Impact of risk factors for 5-year EFS and incidence of molecular relapse.<sup>a)</sup> 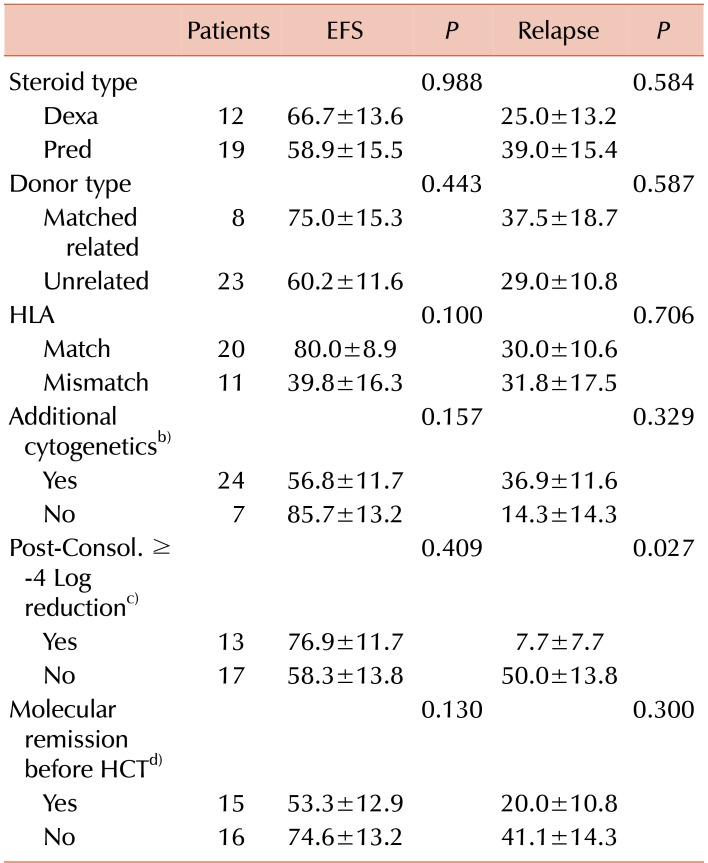