Recent studies have devoted much attention to non-protein-coding transcripts in relation to a wide range of malignancies. , a long non-coding RNA, has been reported to be associated with cancer progression and prognosis. Thus, we here determined gene expression in chronic lymphocytic leukemia (CLL), a genetically heterogeneous disease, and explored its possible relationships with cytogenetic abnormalities.

expression level was up-regulated in the CLL group compared to healthy controls (=0.008). Del13q14, followed by Del11q22, were the most prevalent cytogenetic abnormalities. We found no association between the FISH results and expression in patients.

Altered expression of is associated with CLL development. Further investigations are required to assess the relationship between this long non-coding RNA and CLL patient survival and prognosis.

Chronic lymphocytic leukemia (CLL), a common blood cancer in western world, is characterized by proliferation and accumulation of neoplastic CD5high B-cells in bone marrow, peripheral blood, and secondary lymphoid organs [1]. It mainly affects the elderly, and the mean age at diagnosis is about 70 years. CLL is more common in male subjects. About 25–30% of all new leukemia cases can be attributed to CLL in the western population. However, CLL is rare in Asia and accounts for only about 5% of all leukemia cases [2]. Several factors have been reported to increase the risk of CLL including occupational exposure to specific substances (ethylene oxide, benzene, 1,3-butadiene, and pesticides), ethnicity, positive family history of lymphoproliferative disorders, and genetic predisposition [3]. CLL has a heterogeneous nature and involves numerous genetic and epigenetic alterations. Some patients need interventions due to progressive disease course, whereas subjects with indolent course require no therapy for years [4].

Studies have revealed that only 2% of the human genome sequences are protein-coding genes, whereas the majority of transcriptome does not encode proteins. Non-coding RNAs (ncRNAs) are divided into regulatory and housekeeping classes. Regulatory ncRNAs are subcategorized, depending on the nucleotide length, into long (>200 nt) and short (<200 nt) ncRNAs. Long ncRNAs (lncRNAs) play important roles in multiple biological processes such as DNA repair, regulation of gene expression, transcription, and translation [5]. Some lncRNAs, including , , and , serve as tumor suppressor and inhibit tumor cell growth. Oncogenic lncRNAs, such as and , are upregulated in a variety of malignancies and lead to tumorigenesis, metastasis, and progression of cancers [6]. (metastasis-associated lung adenocarcinoma transcription 1), also named (nuclear enriched abundant transcripts), is an 8.7 kb oncogenic lncRNA located on chromosome 11. It has a key role in alternative splicing and gene expression regulation. In vitro studies have shown that deregulation of by oncoviruses leads to increased expression of and upregulation of TP53 is associated with depletion [7]. A recent study demonstrated that KG1 myeloid cell line have a higher expression level of than normal bone marrow cells [8]. In multiple myeloma patients, progression-free survival was associated with decreased expression of [9].

Although the precise molecular mechanisms by which MALAT1 may contribute to CLL pathogenesis have not been fully elucidated yet, several observations support the involvement of this lncRNA in CLL. These include its role in cell cycle regulation and p53-mediated response to DNA damage, as well as in mRNA processing. The emerging role of MALAT1 in hematologic malignancies prompted us to quantify its expression in patients with CLL to establish whether its deregulation may be associated with disease progression.

Demographic and clinical information on study participants is listed in Table 1. White blood cells and lymphocyte count were higher in CLL patients. Platelet count and hemoglobin levels were significantly higher in healthy controls. There were no gender-related differences in the groups. According to FISH findings, 20% of patients showed a normal chromosomal pattern. Del13q14 was the most common cytogenetic abnormality as it was found in 53.3% of patients, followed by del 11q22 (16.6%), del 17p13.1 (10%), trisomy 12 (10%), and c-MYC amplification (3.3%).

Malignancies are a global health issue and are the 3rd cause of mortality in Iran. In this context, the increase in the recorded incidence of blood cancers in Iran can be attributed to several causes including improvement in cancer diagnosis setting and registry and increase in cancer-related risk factors or unknown etiologies [10].

With the advancement of biotechnological tools, studies have devoted much attention to genetic alterations as an inseparable part of cancer. In this respect, non-protein-coding transcripts such as lncRNAs play a critical role in regulating cellular functions and may be related to both tumor suppressive and oncogenic characteristics. According to recent evidences, lncRNAs are involved in many principal cellular mechanisms such as transcriptional and post-transcriptional regulation, chromatin rearrangement, and nuclear-cytoplasm trafficking [11]. Deregulation of lncRNA expression has been reported in a variety of human diseases, from neurologic disorders (multiple sclerosis and Alzheimer's disease) to several solid (breast, lung, bladder) and hematologic cancers (lymphoma and leukemia) [1213].

Previously, the overexpression of observed in patients with the M5 subtype of AML was found associated with lower overall survival. Furthermore, knock-down by Lentiviral vectors was shown to increase apoptosis and inhibit proliferation of leukemic cells [23]. In mononuclear bone marrow cells of multiple myeloma (MM) patients, was overexpressed, whereas a decrease in resulted in improved progression-free survival [9]. Isin et al. [24] performed a study to determine cell-free lncRNA profile in MM and CLL patients. was downregulated in MM patients, whereas no significant differences were observed between CLL patients and healthy controls which is discordant with our findings. Similar in-vitro and in-vivo investigations have been carried out focusing on expression in different types of lymphoma, including lymphomas of mantle cell [25], diffuse large B-cell [26], and T and NK cell lymphomas [27]. All these studies reported that upregulation was associated with poor prognosis.

In conclusion, a high expression of oncogenic lncRNA in CLL patients may reflect its involvement in tumorigenic processes. Further studies are required to establish the suitability of MALAT1 determination for diagnostic and therapeutic applications in CLL. 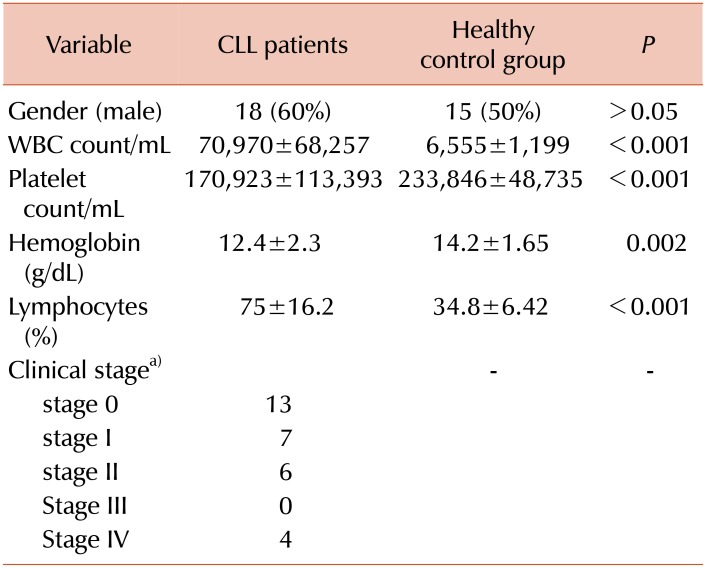