Extranodal NK/T-cell lymphoma, nasal type (ENKTCL) has a high prevalence in Asia and Latin American countries, such as Mexico, where it encompasses 40% of all T-cell non-Hodgkin lymphomas. Historically, responses to anthracycline-based therapies have been disappointing. Since data about the effectiveness of L-asparaginase-based regimens in Mexico are limited, we compared both therapies in our center.

We performed a retrospective cohort of patients with newly diagnosed ENKTCL, who were divided into two groups for treatment and analysis (group 1: L-asparaginase-based regimen and group 2: anthracycline-based regimen) between 2001 and 2016.

T-cell non-Hodgkin lymphoma (T-cell NHL) is estimated to account for - 10% of all non-Hodgkin lymphoma cases. The extranodal NK/T-cell lymphoma nasal type (ENKTCL), which is a T-cell NHL subtype, is an aggressive lymphoid neoplasm that usually involves the nasal and paranasal areas and is associated with poor prognosis. The average incidence of ENKTCL in the United States, Canada, and Europe is estimated to be around 5% of all T-cell NHL cases; while in Asia and in some Latin American countries, ENKTCL involves 22% of all cases [123]. Remarkably, a recent report showed that in the Mexican population, about 40% of all T-cell NHL cases are ENKTCL [3].

Historically, early stage and high-risk patients with ENKTCL have been treated with anthracycline-based therapies such as cyclophosphamide, adriamycin, vincristine, and prednisone with or without radiotherapy (CHOP+RT). Unfortunately, treatment responses have been disappointing in these patients. Early stage patients with ENKTCL who received CHOP+RT had an overall response (OR) rates between 58 and 87%, with three and five-year overall survivals (OSs) of 59 and 75%, respectively. Furthermore, these patients had a relapse probability that ranged from 28 to 57% [456]. In addition, high risk patients exhibited an OR between 20 and 40% with a 5-year OS of 30% and a probability of relapse between 30 and 70% [678].

The low response rates that have been observed with anthracycline-based regimens are due to the overexpression of the multidrug resistance (MDR1) gene product, P-glycoprotein, which effluxes anthracyclines out of cells. Importantly, this has not been observed with other compounds, such as L-asparaginase [9]. One decade ago, a study performed by Yong et al. showed for the first time that patients with relapsed/refractory ENKTCL who were treated with L-asparaginase-based regimens had good response rates. Based on this study, L-asparaginase was recommended for addition to chemotherapy regimens for this group of patients [1011].

There are many L-asparaginase-based regimens being used nowadays, with better results. Recent studies have reported OR rates between 77 and 83% and a 5-year OS between 55 and 67% for patients with relapsed/refractory ENKTCL [10111213]. Although these results suggest that the addition of L-asparaginase to first line chemotherapy regimens for patients with ENKTCL might facilitate survival improvements, no prospective phase III clinical trials have been performed to test which regimen is superior.

To our knowledge, this is the first study in the Mexican population to compare the effectiveness of L-asparaginase-based regimens as first line therapy to previously-offered anthracycline regimens in patients with ENKTCL, across all clinical stages.

There is limited data on the effectiveness of L-asparaginase-based regimens in non-Asian populations, such as Latin Americans. In 2016, Qi et al. published a retrospective study of 43 patients with ENKTCL in North America, which consisted of 76% non-Asians and 23% Asians. Patients with early-stage disease (73%) received chemotherapy followed by radiotherapy, and patients with advanced-stage disease received primary chemotherapy (accelerated-CHOP prior to 2009 and modified-SMILE after 2009). CR rates were reached in a higher percentage of patients who received modified-SMILE regimens (80% vs. 30%, =0.015), with a 2-year OS and progression free survival of 60% and 40% respectively. However in agreement with other published data, the outcomes of patients with early stage disease were better than those with advanced stage disease, who experienced frequent progression and high mortality. So far, no prognostic difference have been identified in terms of ethnicity [26].

Another recent retrospective study from Huang et al. [27] compared the efficacy between the “sandwich” LVD regimen and the ‘sandwich’ CHOP regimen in 80 Asiatic patients with stage II ENKTCL. They found a statistical difference between objective response rates in patients treated with LVD (89.6%) and CHOP (65.6%; =0.009). Moreover, they reported disease progression in 8.3% and 31.3% of patients who were treated with LVD and CHOP, respectively. A significant advantage in OS and progression free survival was also observed. Importantly, experts have ceased to recommend the inclusion of anthracyclines to ENKTCL treatment schemes, based on the fact that this tumour shows multidrug resistance due to P-glycoprotein overexpression and the disappointing responses to anthracycline-based regimens in previously published clinical studies [9].

Interestingly our data showed a lower median age for patients in our cohort (35.4 yr) compared to those in other studies (44–52 yr) that included asian and non-asian individuals [132628]. However, despite their young age, it seems that they do not tolerate chemotherapy as well as those in other latitudes, as reflected by our high early mortality. In agreement with other reports, we found a predominance of ENKTCL in the male population. In agreement with previous reports that showed a low efficacy for anthracycline-based regimens in patients with ENKTCL, our data showed a global CR rate of 27.3% (50% in stage I, 0% in stage II, and 20% in stage IV) [29]. This whole group showed a 5-year OS of 24%.

In contrast, patients treated with L-asparaginase showed a CR rate of 45.4% (70% in stage I, 50% in stage II and 12.5% in stage IV), with a 5-year OS of 45%. This represents a higher response rate than that observed for other anthracycline-based regimens, although the difference in CR rates between both groups was not statistically significant, probably due to the relatively small number of patients analyzed. The all-cause mortality was 27.3% in group 1 versus 72% in group 2 (=0.027). Moreover, the L-asparaginase-treated group showed a lower progression rate (18.4 vs. 54.5%; =0.04) than the anthracycline treated group. The relapse rate could not be measured because only one patient in each group showed relapse. Interestingly, our results showed that LVP-treated patients with stage I disease had an CR rate of 64.3%, while those with stage II to IV disease who were treated with L-aspMetDex had a CR rate of 35.7%. These values are significantly lower than those reported by Huang and other studies for similar groups of patients [1819].

The use of L-asparaginase as a cytotoxic agent for the treatment of relapsed/refractory disease was first introduced 10 years ago, with good results [10111213]. However, there remains some controversy about which chemotherapeutic regimen is the most adequate as first-line therapy for patients with ENKTCL. Regimens such as SMILE (dexamethasone, methotrexate, ifosfamide, L-asparaginase, and etoposide) have been studied in newly diagnosed patients across all clinical stages and in relapsed/refractory scenarios. SMILE regimens have achieved OR rates of almost 80%, complete responses between 45 and 56%, and an OS of 50%, but are also associated with high-grade 3 toxicities [3031]. Particularly, the incorporation of the SMILE regimen into our institution treatment protocols has not been possible because of its high costs. For example, the L-aspMetDex regimen could cost around $867 per cycle, while the SMILE regimen is around $1,694, without the cost of granulocyte colony stimulating factor (G-CSF) included in the regimen protocol. This chemotherapeutic protocol is not currently covered by any social security system. The same situation is present in the transplantation protocols of our institution, where the social security systems of our country just began to cover this procedure. Therefore, in our cohort, many patients could not receive this treatment modality, which can potentially change the course of the disease, based on response and risk factors.

The impact of radiotherapy is also confirmed by our results. No matter which chemotherapeutic regimen was offered, the combined modality is of great use in this particular type of lymphoma in terms of response rates and survival in early stages [561827].

It is possible that the true impact of L-asparaginase in first line therapy for ENKTCL could not be fully assessed in our population, due to the low number of patients who were included in this retrospective study and because responses could not be measured in eight (24%) patients, six of whom died early, during the first two cycles of chemotherapy, due to septic shock. The majority of these patients were treated with LaspMetDex regimens, one patient abandoned treatment, and another was still on treatment at the time of our analysis.

Although our study is restrospective and has a limited sample size, our data showed an evident survival advantage for patients with ENKTCL who were treated with L-asparaginase-based regimens in comparison to those treated with anthracycline-based regimens. Due to the higher incidence of ENKTCL in the Mexican population, in contrast to other geographical regions, we propose that the inclusion of L-asparaginase should be considered in treatments across all clinical stages. However, we are still in need of a larger study to validate our results and identify the factors that impact outcomes across latitudes, such as ancestry-specific factors, differences in treatment adherence, and access to therapy.

Comparison of overall survival in both groups. 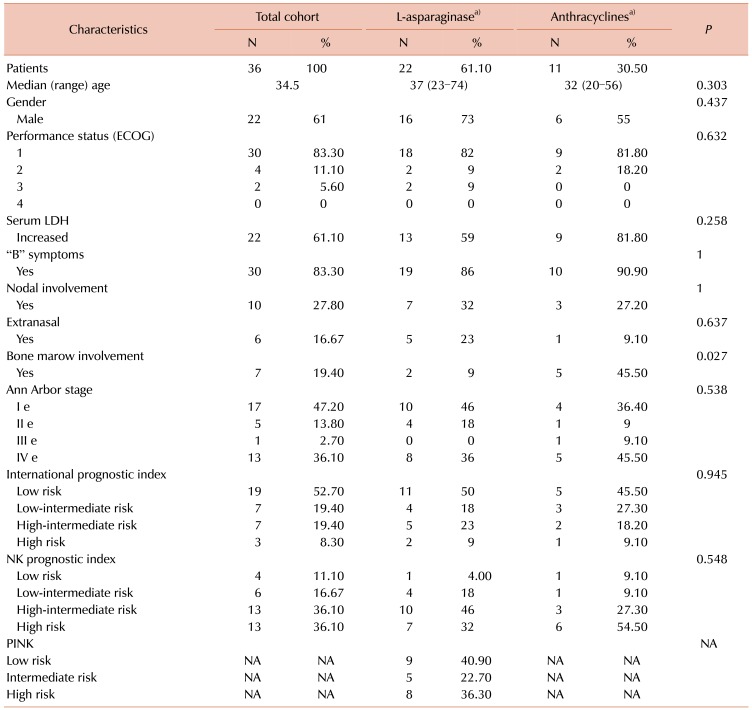 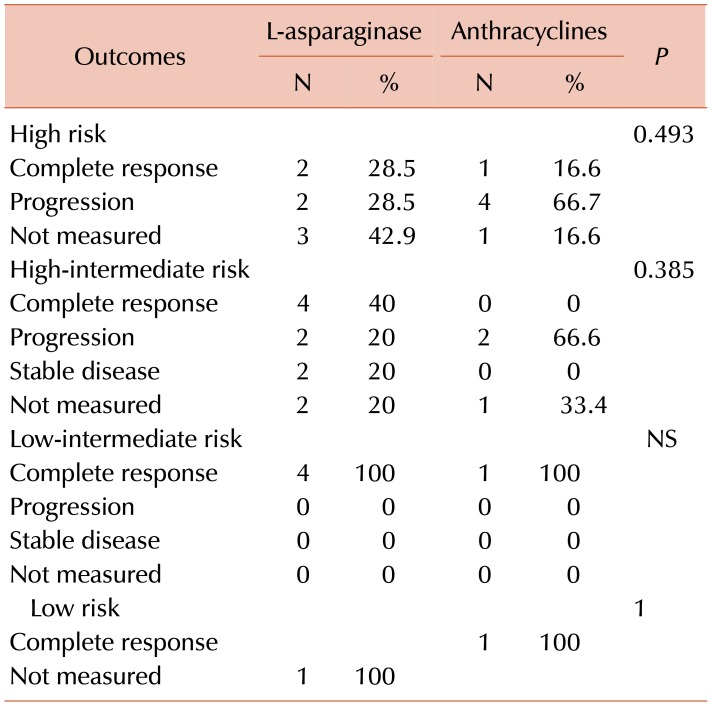 Table 4 Effect of the variables on survival in COX regression analyses.