The incidence of lymphoplasmacytic lymphoma (LPL) is lower in Asian than in Western populations. Few studies have described the clinical features and treatment outcomes of patients with LPL, including non-IgM LPL, in East Asia.

We retrospectively analyzed patients diagnosed with LPL at Asan Medical Center between January 2001 and March 2016. We evaluated the clinical features and survival outcomes of patients with LPL and non-IgM LPL and compared these data with those of patients with LPL/Waldenström's macroglobulinemia (WM).

The median age at diagnosis of patients with LPL was 61.5 years (range, 34–77 yr); most patients were male (91%). Approximately three-quarters of the 22 patients with LPL were in the low or intermediate risk groups according to the International Prognostic Scoring System for Waldenström's Macroglobulinemia classification. The median follow-up duration was 75 months [95% confidence interval (CI), 48–102 mo], and the median overall survival (OS) was 81 months (95% CI, 0–167 mo). The number of patients in the non-IgM LPL group who exhibited extramedullary involvement was higher than in the LPL/WM group. OS of the LPL/WM group was improved compared with that of the non-IgM LPL group [median not reached vs. 10.0 mo (95% CI, 0–36.7); =0.05].

We present a single-center experience of 22 patients with LPL, including a non-IgM cohort, in Korea. The treatment of non-IgM LPL was heterogeneous, and patients with non-IgM LPL showed a higher 5-year mortality rate and more adverse prognostic factors than those with LPL/WM.

According to the latest World Health Organization (WHO) classification revised in 2016, lymphoplasmacytic lymphoma (LPL) is a monoclonal expansion of B-lymphocytes with varying degrees of B-cell differentiation from small lymphocytes to plasma cells [12]. Waldenström's macroglobulinemia (WM) is a subset of LPL with bone marrow involvement and the presence of circulating immunoglobulin M (IgM) paraprotein [2]. LPL presenting with serum monoclonal IgM, referred to as LPL/WM in clinical practice, is frequent, whereas non-IgM LPL presenting with IgG or IgA is rare and accounts for <5% of all LPL cases [3].

The incidence of LPL is approximately 0.3–0.4 cases per million persons per year in Asia, which is 10-fold lower than in Western countries [4]. Possible reasons for this difference in incidence likely include race-dependent genetic predisposition to LPL, lifestyle differences, and environmental factors [5].

Recently, a mutation in () has been recognized in most patients with IgM LPL/WM, accounting for >90% of tumor samples from patients with LPL [6]. This mutation plays a crucial role in the pathogenesis of LPL/WM and can help to differentiate B-cell lymphomas and plasma cell myeloma, both of which warrant further research [6]. A previous study reported that fewer patients with non-IgM LPL harbor this mutation than those with classic LPL/WM; consequently, these 2 diseases may have different disease entities [7].

LPL accounts for <1% of NHL [3], and the incidence of LPL is approximately 8.3 cases per million per year in Western countries [9]. The incidence of LPL in Asia is 10-fold lower than that in Western countries [4]. In Korea, LPL accounts for 0.8%–1.7% of all cases of NHL [1011]. We evaluated the clinical characteristics and treatment outcomes of 22 patients with LPL from among the 4,469 patients within our NHL registry, which has been maintained at our institution for 15 years. Here, patients with LPL were 0.5% of those with NHL. Although previous studies reported the incidence of non-IgM LPL as <5% of LPL cases [12], our incidence (36.3%) was markedly higher. However, since there are few studies on the incidence of non-IgM LPL in Asia, this finding warrants further population-based investigations.

In the current study, LPL was common in elderly patients with a median age of 61.5 years, and patients in the LPL cohort were predominantly male (20/22, 90.9%), consistent with previous reports [1113]. Patients with LPL/WM in Korea were more commonly male (77.0%–90.9%) than those in Western countries (54.5%–66.0%) despite the similar median age of diagnosis between Korea (57–66 yr) and Western countries (62–69 yr) [1415]. However, unlike a previous report [3], patients in the non-IgM LPL cohort were elderly with a median age of 65.5 years with a male preponderance (N=7, 87.5%), although further studies based on larger patient samples are required to verify this result. Notably, extramedullary involvement was more common in the non-IgM LPL group than in patients with LPL/WM. This was because a number of non-IgM LPL patients had lymph node, lytic bone lesion, or pleural involvement. This finding was also consistent with the finding of the previous report that indicated that the rate of extramedullary involvement was significantly higher in patients with non-IgM LPL [16].

Interestingly, half (N=4) of patients (patients No. 1, 2, 4, and 7) in the non-IgM group were initially diagnosed with multiple myeloma and received 1 cycle of VAD, VMP, or MP treatment. In contrast, all patients in the LPL/WM group were appropriately diagnosed initially. Of the 4 patients misdiagnosed with multiple myeloma at initial presentation, 3 had osteolytic bone lesions, whereas the other patient had no bone lesions. This patient without bone lesions was referred from another institution with a diagnosis of multiple myeloma and had already undergone 1 cycle of VMP treatment. All 4 patients were reclassified to non-IgM LPL group after confirmation of results via bone marrow biopsy. This suggests that the diagnosis of non-IgM LPL can be challenging, given that some plasma cell myelomas can exhibit lymphoplasmacytoid features at the histomorphological level and resemble low-grade lymphomas, particularly in cases of osteolytic lesions [1718]. Moreover, plasma cell neoplasms producing IgM are relatively rare, while those producing IgG or IgA are common. This may be one of the reasons why we observed patients misdiagnosed as having multiple myeloma only in the non-IgM LPL group.

Although there are no prospective studies regarding standard treatment regimens for patients with LPL, current National Comprehensive Cancer Network guidelines recommend treatment including alkylating agents, nucleoside analogs, bortezomib, and R for symptomatic patients with LPL/WM [12]. Treatment of patients with non-IgM LPL also follows these guidelines. In this study, a total of 9 patients with LPL were available for response evaluation, and 6 of 9 patients received an R-based regimen, including R-CHOP and BR, as well as a CHOP or CHOP-like regimen, including CVP and CP, and all patients achieved CR or PR. Currently, R-CHOP and BR are commonly-used combination regimens based on their active treatment efficacy of at least 90% overall response rates in previous randomized trials, supporting response in our cases [1920]. However, the lack of significant changes in OS [R-based regimen vs. conventional regimen; median not reached vs. 57.8 mo (95% CI, 0–130.1); =0.49] and PFS [median not reached vs. 7.6 mo (95% CI, 0–30.5); =0.16] in patients who received the R-based regimen as first-line therapy should be verified in future studies.

Our study is limited by its retrospective design and the small number of patients. In addition, a number of patients were lost to follow-up or refused further treatments, which rendered response evaluation available for only 9 patients, and data on mutations in our registry were not available for most patients. Considering the small sample size, we were unable to perform formal statistical comparisons regarding clinical characteristics between the groups or evaluate prognostic factors. Moreover, the higher incidence of patients with non-IgM LPL may reflect a referral bias inherent to the study hospital. Furthermore, each patient received heterogeneous treatments, which likely confounded our study outcomes. 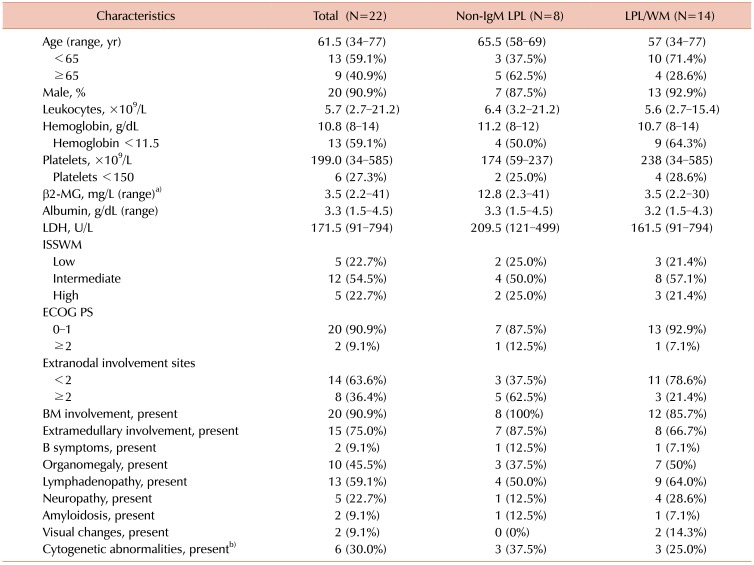 Table 2 Outcomes and treatments of patients. 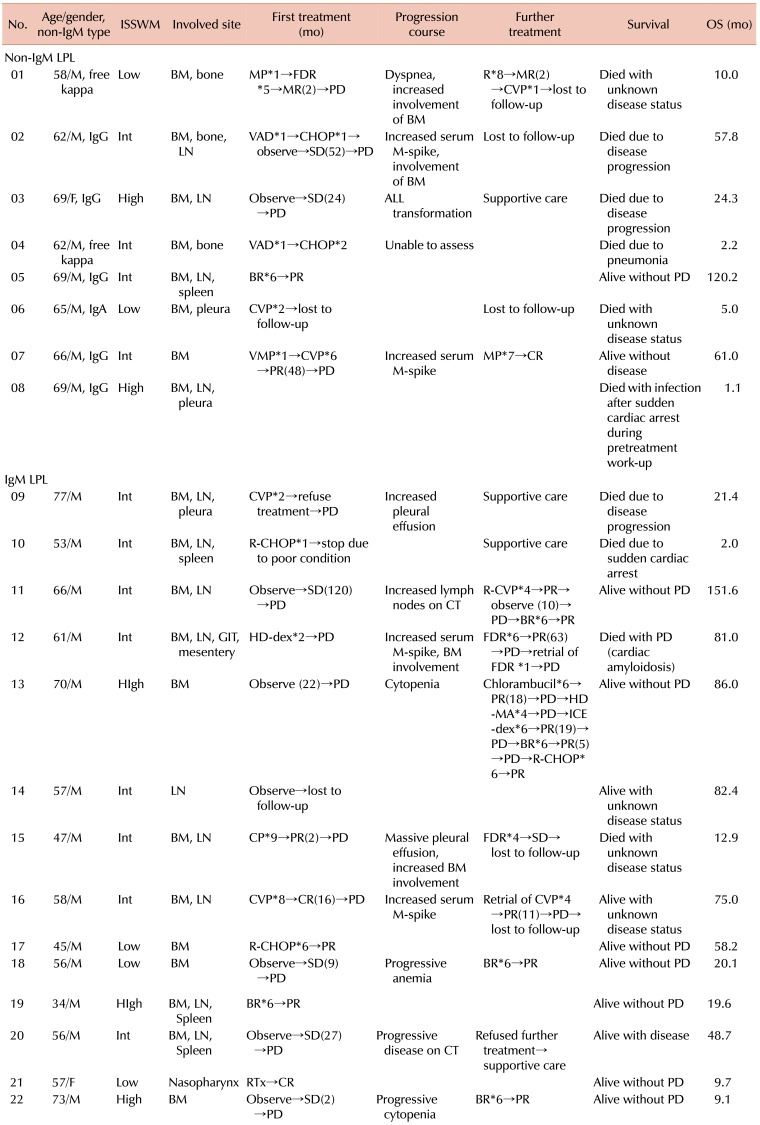