Pulmonary embolism (PE) is an uncommon disease in children and one of the presentations of venous thromboembolism (VTE). Usually, VTE in children and adolescents develops as a secondary complication of underlying factors such as venous catheterization, malignancy, infection, congenital heart disease, trauma, surgery, and inherited or acquired thrombophilia [1]. The relationship between VTE and certain types of inherited thrombophilia is well known in adults but remains inconclusive in pediatric patients, mainly due to lack of evidence [23]. Among pediatric VTE patients in Western countries, the incidence of inherited thrombophilia, including factor V Leiden (G1691A), factor II (G20210A), protein C, protein S, and antithrombin (AT) deficiency, ranges from 10 to 59%. An especially higher prevalence of factor V Leiden was reported in the Caucasian population [145]. We report a patient with combined deficiency of AT III and protein C, together with mutational analysis. To our knowledge, this is the first reported case with , c.1154-14G>A in Korea.

A 15-year-old girl developed chest discomfort 1 day prior to presentation, with progression to chest pain on the day of her visit to the emergency department. Chest computed tomography (CT) showed embolism of the right main pulmonary artery. Based on a history of PE 4 years prior, she was diagnosed with a recurrence. In the past episode, she visited the emergency department with the complaint of 8 hours of continuous, right upper and lower quadrant abdominal pain that worsened over time. She had been wearing a splint for 1 month following a simple fracture of the right ankle 2.5 months prior. Her grandmother had a history of PE and her father had a cerebral VTE. The subject's father was on warfarin through the neurology outpatient clinic. Her grandmother recalled developing PE after colon surgery. Chest CT with contrast revealed PE involving the right pulmonary artery, except for the right middle lobe segmental artery, accompanied by consolidation and ground glass opacity (Fig. 1A, B). CT venography showed multifocal venous thrombi in the right common iliac vein and inferior vena cava (Fig. 1C), a small amount of venous thrombus in the right popliteal vein, and a fracture of the right distal tibia (Fig. 1D). Thrombophilic evaluation revealed normal levels, except for protein C and AT III (Table 1). Based on her family history, genetic analysis was performed for PROC, factor V Leiden (R506Q), and prothrombin II (G20210A) mutations, but the results were negative. The patient's symptoms improved with anticoagulation (heparin), and she was discharged on warfarin. Warfarin was discontinued after 3 months due to her complaint of menorrhagia.

Laboratory findings were consistent with those of the previous event in which decreased levels of protein C and AT III (Table 1) were observed. Therefore, at this time, the antithrombin gene for and PROC, was reevaluated. A heterozygous variant of splice site at -14 in intron 5 (c.1154-14G>A) was detected (Fig. 2). As the patient's father, who had a history of VTE, was unwilling to undergo genetic evaluation, familial penetrance could not be confirmed.

AT, encoded by the gene, is the most important naturally-occurring anticoagulant in the plasma and is a major inhibitor of activated coagulation factors IIa and Xa. Inherited AT deficiency is a well-known cause of thrombophilia and more than 300 mutations have been reported so far. Type I deficiency is characterized by a decrease in both antigen levels and functional AT activity. Type II deficiency is associated with decreased functional activity but almost normal antigen levels due to the presence of circulating dysfunctional AT variants [6]. Several cases with this type of mutation (c.1154-14G>A) involving a history of thromboembolic events with recurrences at a young age have been reported since 1991, and have been categorized as type I AT deficiency [7]. Jochmans et al. [8] demonstrated that the c.1154-14G>A mutation showed a 12-bp insertion of intron 5, just ahead of exon 6. Subsequently, a 12-bp insertion was thought to have created a new splice site to form an unstable protein with 4 extra amino acids.

Our patient had a risk factor, i.e., the history of a right ankle fracture 2.5 months prior. Therefore, she was predisposed to prolonged immobilization. Apart from acquired thrombophilic risk factors, AT and protein C levels were simultaneously reduced in the 2 episodes of PE and heterozygosity for the gene was detected by mutational analysis. However, the PROC mutation was not detected by direct sequencing, even though the protein C level was reduced. The direct sequencing method is known to have PROC gene coverage of over 99%. Our patient had multiple risk factors including prolonged immobilization, inherited AT deficiency, and protein C deficiency. There are some anecdotal reports of combined AT and protein C deficiency [910].

Of interest is that the patient initially presented with right abdominal pain; this is extremely rare in children and even adults with PE. Although the patient had multifocal thrombosis involving the right popliteal region, right common iliac, and inferior vena cava, her abdominal pain was more likely to be caused by diaphragmatic pleurisy due to right lower lobe consolidation. The most common complaint in teenagers with PE has been found to be pleuritic chest pain, in addition to cough, fever, and hemoptysis [11].

This study was supported by a grant from the Development Fund Foundation, Gyeongsang National University, 2015.

Computed tomography (CT) performed in the emergency room showed pulmonary emboli (arrow) in the right main pulmonary artery and consolidation and ground glass opacity in the right lower lobe . Multifocal thrombi in the right common iliac vein (arrow) and inferior vena cava are visible in the abdominal CT scan . A small amount of thrombus is seen in the right popliteal vein, detected on CT venography (arrow) .

Mutation showed a single base substitution of G to A in intron 5 at nt. position (c.1154-14G>A). Subsequently, 12 bp insertion was thought to have created a new splice site to form an unstable protein with 4 extra amino acids (Val-Phe-Leu-Pro). Arrow indicates the intron-exon junction and boxes indicate the mutated nucleotides [8]. 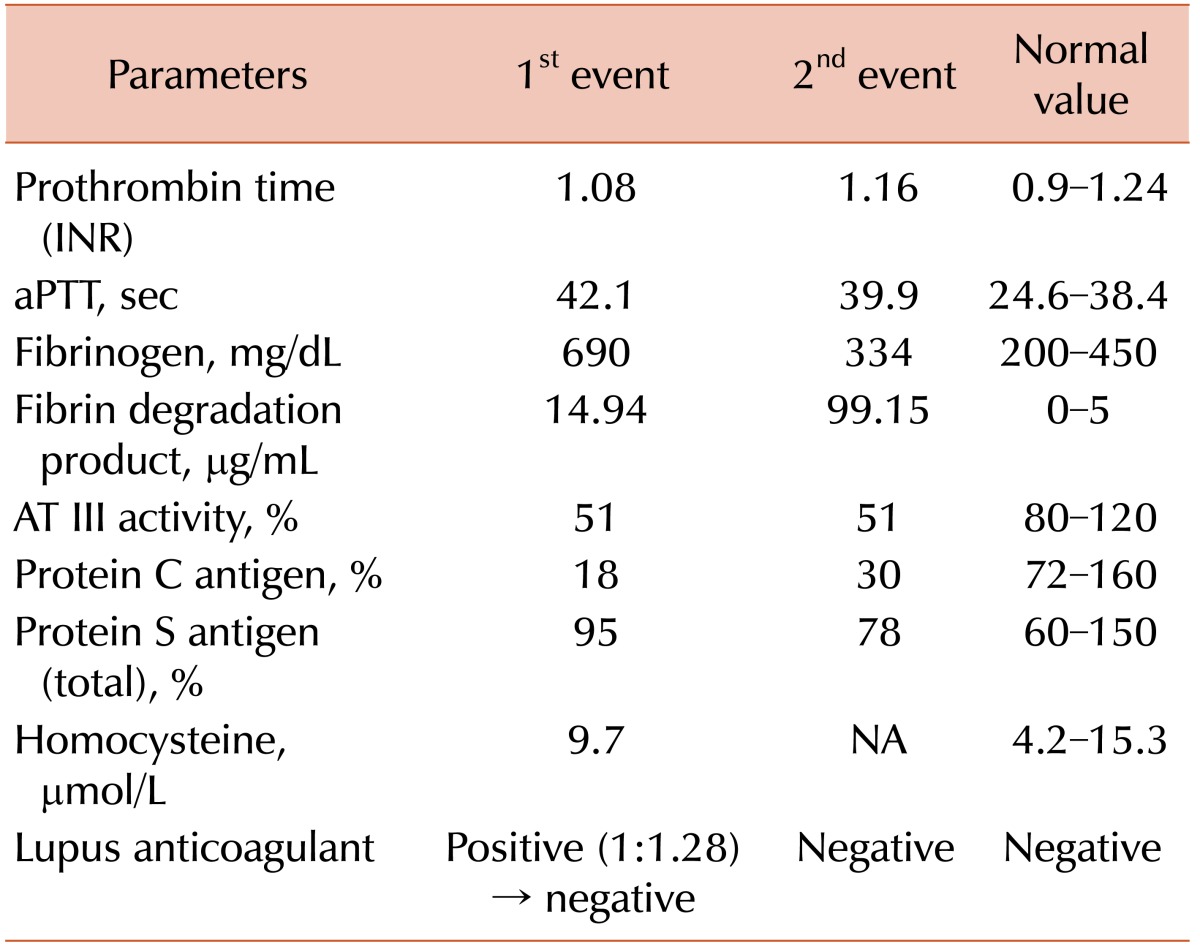