Autoimmune hemolytic anemia (AIHA) is characterized by an autoimmune-mediated destruction of red blood cells. Warm AIHA (wAIHA) represents 60% of AIHA cases and is associated with the positive detection of IgG and C3d in the direct antiglobulin test (DAT). This study aimed to assess the clinical and laboratorial differences between primary and secondary wAIHA patients from a referral center in Mexico City.

Eighty-nine patients were included. Secondary wAIHA represented 55.1% of the cases. At diagnosis, secondary wAIHA patients showed a DAT mixed pattern more frequently than primary wAIHA patients (36.7 vs. 17.5%, <0.001). In the survival analysis, patients with secondary wAIHA had a lower time to response (18 vs. 37 days, =0.05), median disease-free survival (28.51 vs. 50.95 weeks, =0.018), and time to splenectomy (43.5 vs. 61 wks, =0.029) than those with primary wAIHA. Due to economic constraints, rituximab was considered as the third-line treatment in only two patients.

Secondary wAIHA may benefit from a longer low-dose steroid maintenance period mainly due to its shorter time to relapse and time to splenectomy than primary wAIHA.

Autoimmune hemolytic anemia (AIHA) is a rare pathology characterized by an autoimmune-mediated destruction of red blood cells (RBC). The estimated annual incidence of this disease is 1–3 per 100,000 individuals, with a mortality rate of 11% in patients without treatment [1]. According to the characteristic temperature reactivity of the RBC, AIHA is classified into warm AIHA (wAIHA), cold AIHA (cAIHA), and mixed AIHA [2345]. Depending on the underlying cause of the disease, AIHA can be further classified as primary (or idiopathic) or secondary [6].

The wAIHA represents 60% of AIHA cases, and 50% of the patients with secondary wAIHA have lymphoproliferative neoplasia or other autoimmune disorders as the underlying cause [123]. Alternatively, cAIHA is subdivided into primary and secondary cold agglutinin syndrome and paroxysmal cAIHA [5].

Due to the relatively small number of studies on wAIHA, the management of this disease is mainly based on expert opinion [9]. Corticosteroids are considered the first-line treatment for this disease, with 70–80% of patients achieving a complete response (CR). Among the patients with a CR, only 1 out of 3 individuals maintain it, once the steroids are suspended [10]. Second-line therapies should be considered in those patients who require more than 10 mg of prednisone a day to maintain remission and in those that have multiple relapses [10]. Splenectomy and rituximab are the most widely used second-line therapies [111213].

Due to the lack of studies in Hispanic populations with wAIHA and the limited number of publications that have assessed the clinical and laboratorial differences between primary and secondary wAIHA, we decided to conduct this study in order to provide insight into the clinical and biochemical characteristics (i.e., differences between primary and secondary wAIHA) of patients with wAIHA in a tertiary referral center in Mexico City.

Due to the rarity of AIHA, only few studies have analyzed the epidemiological and biochemical properties as well as the responses to treatment. Furthermore, there are no clinical guidelines that could be useful in the diagnosis, treatment, and evaluation. To date, the largest study was conducted by the GIMEMA group, where 308 patients with hemolytic anemia of various serological types were analyzed. In that study, the most common type was wAIHA [9] and thus we analyzed emphacizingon the wAIHA.

The majority of patients afflicted with wAIHA were female [12131415]. This gender predilection could be attributed to the fact that women are more susceptible to autoimmune diseases. The median age at diagnosis was 36 years, which is slower than the previous reports (i.e., 50 yrs) [1617]. This discrepancy can be explained by the fact that our institution is a referral center for SLE and APLS, which are diseases that mostly affect women of childbearing age.

The most frequent clinical findings in this study were anemia and jaundice. Regarding the patients' hemolytic profiles, median Hb, TB, IB, and LDH were similar to the median values in other reports [718].

In this study, a positive DAT with a weak pattern was encountered in 24.7% of the cases, a strong pattern in 47.2%, and a mixed one in 28.1%, similar to that of a French study [6]. The presence of a strong pattern correlated with a greater hemolysis (Table 2). Although it was tempting to transfuse these patients based on the levels, we decided for transfusion based on the clinical manifestations caused by the anemia, not solely on the absolute values of Hb, as exemplified in Table 2 and following the recommendations of other centers [69].

As stated previously, 84.3% of our patients responded to steroids (50.6% with a CR and 33.7% with a PR). These results are similar to the response rates achieved in other centers, where more than 80% of wAIHA cases responded to steroids [81516]. We also found that patients diagnosed with secondary wAIHA responded faster than those with primary wAIHA (18 vs. 37 days, =0.05). Nevertheless, probably due to the underlying autoimmune disorders, secondary wAIHA patients relapsed more frequently than primary wAIHA patients that the primary wAIHA patients had a median DFS of 51 weeks versus 28 weeks in patients with secondary wAIHA (=0.018). It is important to state that other studies have found no statistically significant differences in terms of DFS between primary and secondary wAIHA [1621]. Among the causes of secondary wAIHA, we only found a statistically significant difference in TB levels at diagnosis in the patients with autoimmune-related wAIHA. We believe this could be due to the autoimmune nature of these diseases, or even the concomitant hepatic diseases mentioned previously.

In our center, 40% of the patients were splenectomized, and this procedure represented the standard second-line therapy. The percentage of patients splenectomized by the GIMEMA group was 10%, and they reported a median time from diagnosis to splenectomy of 25 months (92 wks) [8], which does not reflect in time the impact of steroid use; in this analysis, the average time from diagnosis to splenectomy was 15.2 months (60 wks) for primary wAIHA and 10.8 months (43.5 wks) for secondary wAIHA (=0.029), indicating an unfavorable evolution of secondary wAIHA. Only few studies have evaluated the use of splenectomy as the second-line treatment for AIHA, which makes it difficult to compare our results with published studies due to the heterogeneity of the population and the selection criteria for splenectomy as the second-line treatment [622]. The only study group that evaluated splenectomy was the the Centre de Reference National des Cytopenies Auto-immunes de l'Enfant (CEREVANCE) study, which indicated that the rate of splenectomy in pediatric patients with AIHA is 13.9% [23]. However, they analyzed different AIHA etiologies and we believe that the results of this study cannot be extrapolated to an adult population.

Despite its retrospective nature, the present study is the first to define the clinical and biological characteristics of wAIHA in a Latin American population and is one of the few that presents the differences between primary and secondary wAIHA. Furthermore, this study established that secondary wAIHA patients relapsed in a lesser time compared with primary wAIHA patients, suggesting that secondary wAIHA patients may benefit from a longer low-dose steroid maintenance period. In secondary wAIHA, treating the underlying disease first is currently recommended, followed by using a monoclonal anti-CD20 antibody (rituximab) as the second-line treatment if a relapse occurs or the disease is refractory.

Despite splenectomy being considered safe and effective in our center, it should be deferred in secondary wAIHA patients because of the associated risks of developing infectious or thrombotic complications. Due to the rarity of AIHA, multicenter prospective studies are necessary in order to achieve a greater number of patients and thus develop better clinical guidelines.

Time to response to the first-line treatment in patients with primary and secondary wAIHA.

Differences in relapse-free survival between primary and secondary AIHA.

Time-to-splenectomy in patients with primary and secondary AIHA.

Demographics and clinical characteristics of patients with AIHA. 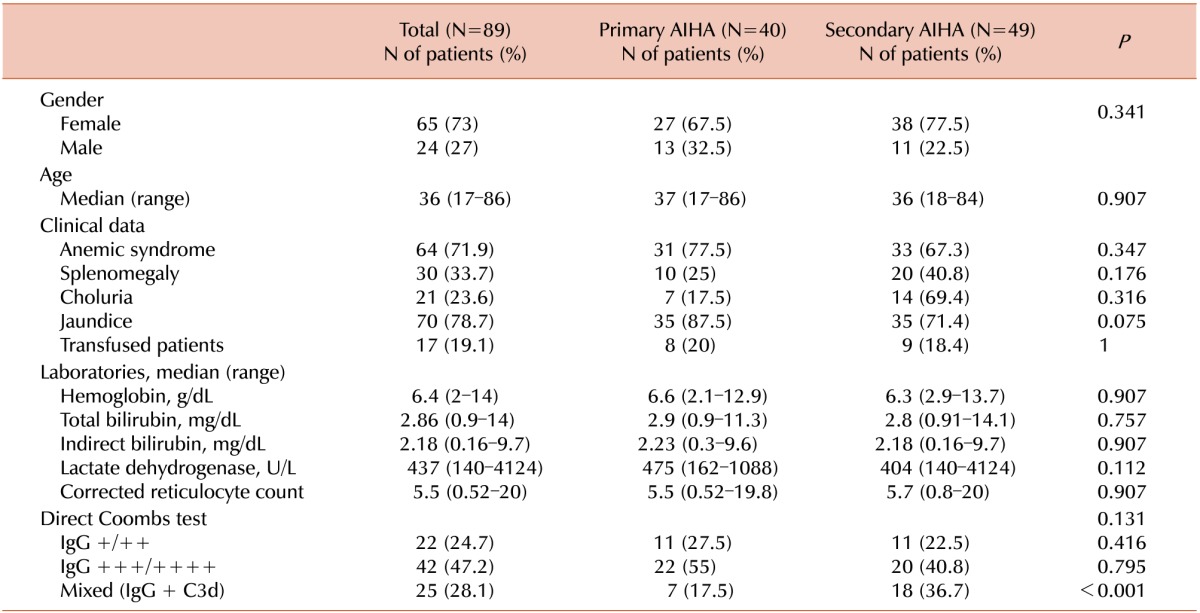 Clinical severity at onset and wAIHA relationship with DAT and transfusion requirements.