IDA was predominant in boys (2.14:1) during infancy and early childhood. The peak IDA incidence was noted among infants aged 9–12 months. Only 7% patients exhibited symptoms of IDA, while 23.6% patients with severe IDA demonstrated classic symptoms/signs of IDA. Low birth weight (LBW) infants with IDA demonstrated low adherence to iron supplementation. In a multivariate analysis, prolonged breastfeeding without iron fortification (odds ratio [OR] 5.70), and a LBW (OR 6.49) were identified as risk factors of severe anemia.

LBW infants need more attention in order to increase their adherence to iron supplementation. For the early detection of IDA, nutritional status of all infants, and iron batteries of high-risk infants (LBW infants, infants with prolonged breastfeeding, picky eaters, and/or infants with the presence of IDA symptoms) should be evaluated at their health screening visits.

The prevalence of anemia and iron deficiency anemia (IDA) remains high in late infancy and early childhood despite the increased breastfeeding rate, improvements in public health, and development of iron-fortified foods [1, 2, 3, 4]. Hopkins et al. [2], using the anemia definition set forth by the World Health Organization (WHO) (hemoglobin [Hb] <11 g/dL), showed that the prevalence of anemia was 23% at 8 months of age, and 18% at 12 months of age. The prevalence of non-anemic iron deficiency may be as high as 30% in toddlers from developed countries [3, 5, 6]. According to the WHO criteria, anemia prevalence was estimated at 15% in Korean preschool-aged children (6–59 mo), and to date, anemia remains an important health concern [7]. Additionally, the demands and expenses for hospital care for IDA-affected children have increased from 2006 to 2014 [8].

IDA in infants remains underdiagnosed as infant blood sampling and obtaining sufficient blood volume for laboratory detection of IDA are difficult. Most infants do not undergo blood tests unless reasonable clinical events are present. Further, the symptoms of IDA (pallor, irritability, poor feeding, fatigue, lethargy, and pica) are non-specific. Although anemia and iron deficiency are usually corrected by the age of 2–3 years, children are adversely affected by IDA.

IDA is associated with impaired neurocognitive function and exercise intolerance [9, 10, 11, 12], and the association exists even after its successful treatment [11]. Therefore, preventing the progression of iron deficiency is especially important during infancy and early childhood when the rapid growth and development rate, especially of the brain [12], increases the vulnerability to IDA-induced impairment.

To detect IDA at an early age and to reduce the adverse impact of iron deficiency, we assessed the clinical characteristics of infants and young children with IDA who visited the Inha University Hospital in the last 17 years. We investigated the distribution of IDA according to age (in months) and gender and analyzed the risk factors of severe IDA.

The chief complaint at the time of hospital visit was the presence of upper respiratory symptoms (46.6%), followed by gastrointestinal symptoms such as vomiting or diarrhea (Table 2). Only 7.0% (N=96) of the patients visited the hospital due to symptoms of IDA, such as pallor, night irritability (≥2 arousals and/or cries), or pica. Even in cases where a subsequent diagnosis of severe anemia was made, only 23.6% patients presented to the hospital with symptoms of IDA, and the remaining 76.4% were diagnosed based solely on laboratory tests, without any accompanying symptoms. The incidence of bleeding-induced IDA (melena, hematuria, epistaxis) was 0.8% (N=11) in our study population.

However, a multivariate analysis showed that a history of low birth weight was the mostly likely indicator of increased severe anemia risk (odds ratio [OR], 6.49; 95% confidence interval [CI], 3.34–12.60). Prolonged breastfeeding without iron fortification (OR, 5.70; 95% CI, 2.67–12.19) was also associated with an increased risk of severe IDA in infants. Failure to thrive and the presence of allergic diseases did not increase the risk of severe anemia at infancy (Table 4). The rate of breastfeeding among LBW infants was 56.8%. Among the LBW infants, none of the MLBW infants received regular iron supplements after discharge from the neonatal unit, while only 13% of the non-MLBW infants received regular iron supplements.

We assessed the clinical characteristics of IDA in infants and young children. Similar to studies conducted in the United States [16], Sweden [17], and in Southeast Asia [18], IDA in infants was more prevalent in boys than in girls (M:F=2.14:1; age<2 yr). According to Domellöf et al. [17], at 9 months of age, male infants have significantly lower Hb level and exhibit a 10-fold higher risk of being diagnosed with IDA than female infants. They further suggested that the reasons for increased IDA risk in the male infants were a higher pre- and post-natal growth rate, an increased fetal erythropoietic activity resulting in a low iron storage state [17, 19], lower iron absorption, larger intestinal iron loss, and more frequent infections in boys than in girls. However, these gender-based differences disappear when iron-fortified foods are administered, and the amount of oral iron requirement is reported to be 6–10 mg/day [17, 18].

In this study, the highest prevalence of IDA was noted in the infants aged 9–12 months. This is due to an inadequate iron supply despite a high iron requirement at this age [14]. The estimated requirement for absorbed iron during the first year of infancy ranges between 0.55 mg/day and 0.75 mg/day [20]. However, after 6 months of age, obtaining enough iron through breastfeeding alone becomes difficult. The mean iron level in breast milk is approximately 0.4 mg/L, and although half of the iron contained in breast milk is absorbed due to its high bioavailability, only 0.2 mg/day of total iron can be absorbed by exclusive breastfeeding even if the infant consumes 1 L breast milk daily, which is still considerably less than the required iron amount [20, 21]. Moreover, as the low iron-containing rice soup is usually fed to the Korean infants during the early stages of weaning, infants may easily develop an iron deficiency.

The undiminishing prevalence of IDA among Korean toddlers could be due to several reasons. First, according to the Korea National Health and Nutrition Examination Survey VI-2, the rate of breastfeeding has increased from 10.2% in 2000 to 45.6% in 2012 [25], while the implementation of iron supplementation has not been sufficient. Second, 47% of the exclusively breastfed infants require 2 months or more to adapt to the weaning [26], and many homemade weaning foods have low iron content. Third, in Korea, the incidence of LBW has increased from 2.7% in 1993 to 5.6% in 2010. Fourth, adherence to iron supplementation is low in LBW infants. Specifically, more encouragement is required to implement iron supplementation in the MLBW infants. The inappropriate consumption of cow’s milk is another important factor for the presence of IDA; an early introduction of cow’s milk can cause IDA. The mean cow’s milk introduction age is 14 months; however, 6.6% infants drink cow’s milk before 12 months of age [25, 27]. An inappropriately high intake of cow’s milk (0.7 L/day) after infancy can also lead to IDA.

In Korea, infants are brought to the clinic approximately 5 times until the age of 1 year for vaccinations and health screenings. However, only 7.1% IDA-affected infants were identified during vaccination and health screening in this study, indicating that many clinicians overlook the seriousness of IDA in growing children. The American Academy of Pediatrics (AAP) recommends IDA screening for all infants aged 9–12 months [22]. Recently, the United States Preventive Service Task Force concluded that the evidence of IDA screening in asymptomatic children is insufficient [28] due to the decrement in IDA incidence. However, IDA is still high among infants and young children in Korea. Therefore, we recommend the screening of iron nutrition, especially in infants at a high risk of iron deficiency. Although the Hb level can be assessed using a finger prick test, other iron measurements require peripheral blood sampling which is difficult to perform in infants. The Iron Score board [29] is useful in selecting infants who need iron status evaluations for appropriate screening and treatment. The score board includes following criteria: (1) age of initiation of weaning food >6 months; (2) intake of only homemade weaning food; (3) successful weaning in >1 month; (4) low iron content in weaning foods; (5) duration of breastfeeding; (6) feeding method; and (7) response to weaning foods. Using this score board, IDA could be predicted with 86.8% sensitivity in infants exhibiting 3 or more of the above-mentioned criteria. This is especially useful as it can help prevent iron deficiency in infants without the need for unnecessary laboratory tests.

IDA in infants and young children is fundamentally a nutritional problem, compared to IDA in older children, where it is mainly caused by blood loss. Therefore, nutritional counseling is important, and recommendations include almost daily intake of one serving of either fish; meat; chicken; or eggs as complementary food, or the use of micronutrient powders [30]. The AAP recommends iron supplementation (2 mg/kg/day) for LBW infants, including the MLBW infants, from the age of 6 weeks to 6 months. It further recommends iron supplementation (1 mg/kg/day) for breastfed term infants starting at 4 months of age and maintained until appropriate iron-containing complementary foods have been introduced [29].

The limitation of our study is that as this was a tertiary hospital-based study, there may have been a possible selection bias, and the disease severity may have been exaggerated. Further, as this study was based on a retrospective survey of medical records, there was a lack of information regarding prenatal maternal anemia status, the time course of weaning to food, and the degree of postnatal weight gain. The follow-up loss was considerable, especially in the mild anemia group, and thus, the treatment response evaluation could not be completed in many cases.

In conclusion, a large proportion of children with IDA were not followed-up as many clinicians do not consider IDA to be a real health issue. Thus, clinicians should recommend appropriate iron supplementation to children, especially to infants at a higher risk of developing iron deficiency. Notably, the MLBW infants need special attention to ensure adherence to iron supplementation. Pediatricians should collect an accurate history of infant feeding practices (feeding type, the timing of weaning initiation, and contents of weaning food) during health screening visits in order to allow the early detection of IDA, and should recommend blood tests to high-risk infants. The questionnaire along with the assessment of iron nutrition is recommended for the detection of anemia and iron status in pediatric clinics. In addition, a prospective and well-organized risk assessment study in infants and young children is necessary to improve iron nutritional status and to control IDA. 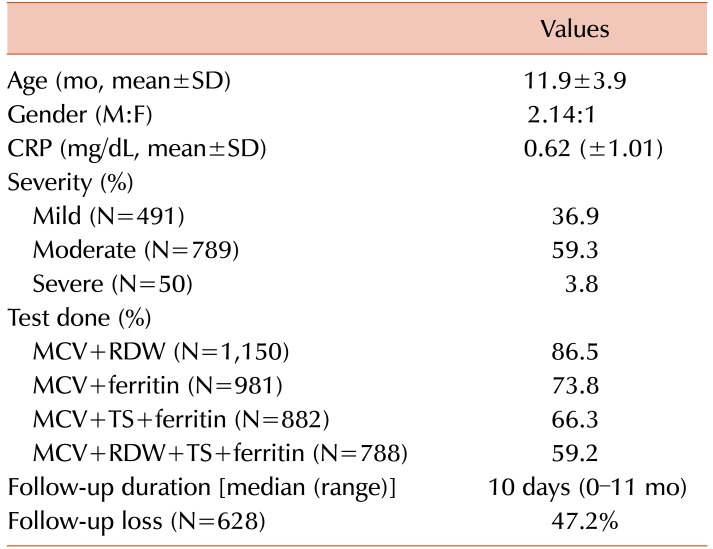 Chief complaints in infants and young children with iron deficiency anemia at the time of hospital visit.