Patients had either stage I/II bulky disease (5.9%) or stage III/IV disease (94.1%). The median patient age at diagnosis was 47 years (range, 22-66 years); 53.3% and 26.7% had high-intermediate and high risks according to aaIPI, respectively. At the time of Auto-SCT, 72.5% and 27.5% experienced complete (CR) and partial remission (PR) after R-CHOP, respectively. The median time from diagnosis to Auto-SCT was 7.27 months (range, 3.4-13.4 months). The 5-year overall (OS) and progression-free survival (PFS) were 77.3% and 72.4%, respectively. The 5-year OS and PFS rates according to aaIPI, R-IPI, and PET/CT status did not differ between the subgroups. More importantly, the 5-year OS and PFS rates of the patients who achieved PR at the time of Auto-SCT were not inferior to those of the patients who achieved CR (=0.223 and 0.292, respectively).

Survival was not influenced by the aaIPI and R-IPI at diagnosis, disease status, or PET/CT status at transplantation, suggesting that upfront Auto-SCT might overcome unfavorable outcomes attributed to PR after induction chemoimmunotherapy.

Rituximab-containing chemotherapy regimens provide superior long-term progression-free survival (PFS) and overall survival (OS) relative to regimens without rituximab in patients with diffuse large B-cell lymphoma (DLBCL), regardless of age [1, 2]. However, even in the rituximab era, the survival rates of patients with high-intermediate- and high-risk International Prognostic Index (IPI) scores remained unsatisfactory [3]. Therefore, several randomized trials have prospectively evaluated the role of upfront autologous stem cell transplantation (Auto-SCT) following therapy with rituximab plus CHOP regimen (cyclophosphamide+hydroxydaunorubicin+oncovin+prednisone/prednisolone;R-CHOP) for aggressive DLBCL [4, 5, 6]. The interim evaluation in a study conducted by Vitolo et al. [4] found no significant differences between the arms treated with R-CHOP alone and R-CHOP followed by Auto-SCT regarding the 2-year OS; however, the 2-year PFS was significantly higher in the Auto-SCT arm. In contrast to the outcomes of high-intermediate-risk patients, Stiff et al. [5] reported that in the subset of high-risk patients alone, induction chemoimmunotherapy followed by early Auto-SCT significantly improved the 2-year PFS and OS relative to chemoimmunotherapy alone. However, Le Gouill et al. [6] failed to demonstrate any survival benefit of upfront Auto-SCT. The role of upfront high-dose therapy with stem cell rescue remains to be established during long-term follow-up in this high-risk group of patients. Meanwhile, we face questions regarding the factors that influence outcomes in patients with DLBCL treated with R-CHOP followed by Auto-SCT.

To investigate whether the age-adjusted IPI (aaIPI) and revised IPI (R-IPI) at diagnosis, the disease response to induction therapy, and the 18F-fluoro-2-deoxy-D-glucose positron emission tomographic/computerized tomographic (FDG PET/CT) status at transplantation could predict outcomes in patients with CD20-positive DLBCL, we retrospectively evaluated the treatment and survival outcomes of patients treated with R-CHOP followed by high-dose therapy with autologous stem cell rescue (HDT/ASCR).

According to a prospective randomized study that compared R-CHOP-21 with R-CHOP-14 for the treatment of DLBCL, CR and PR were documented in 63% and 25% DLBCL patients, respectively, in the R-CHOP-21 treatment group [11]. When patients with chemotherapy-sensitive relapses of non-Hodgkin's lymphoma were randomly assigned to receive either salvage therapy followed by HDT/ASCR or salvage therapy alone, the event-free survival (EFS) and OS rates significantly increased in the Auto-SCT group (=0.001 and 0.038, respectively) [12]. As of 2014, the National Comprehensive Cancer Network Guidelines recommend salvage therapy followed by HDT/ASCR, when feasible, for patients who have achieved PR at best after R-CHOP-like therapy (NCCN Guidelines Version 1.2014) (www.nccn.org).

We retrospectively investigated whether the aaIPI and R-IPI at diagnosis, disease status, and PET/CT status at transplantation could predict the outcomes of patients with CD20-positive DLBCL.

In our study, the Kaplan-Meier curves of the 3 risk groups stratified according to aaIPI scores did not differ significantly with respect to the 5-year OS and PFS rates. A similar finding was described by Dilhuydy et al. [13], who performed a prospective trial to evaluate the efficacy of the addition of rituximab to front-line high-dose therapy followed by Auto-SCT in intermediate-high and high-risk patients with CD20-positive DLBCL. In that study, the 5-year OS and EFS rates were 74%±4% and 55%±5%, respectively. This difference was not statistically significant when the OS and EFS were analyzed according to the aaIPI. The IPI and its variants are the primary prognostic tools used in patients with DLBCL. In the pre-rituximab era, when the aaIPI was applied to patients with chemosensitive recurrent or refractory aggressive non-Hodgkin's lymphomas who had been treated with high-dose therapy followed by Auto-SCT, the scores were predictive of OS (=0.034) [14]. A recent prospective study reported a 2-year PFS and OS of 63% and 73%, respectively, in aaIPI high-intermediate- and high-risk patients with aggressive B-cell lymphoma who had been treated with R-CHOP alone [5]. In our study, the respective 3-year PFS and OS were 69.4% and 75% for the high-intermediate- and high-risk groups. The 5-year PFS and OS for these groups were 69.4% and 71.1%, respectively.

Our study showed no significant differences in the 5-year OS and PFS rates between the PET-negative and PET-positive groups or between the CR and PR groups at the time of transplantation. In addition, the long-term OS and PFS did not differ significantly between the CR and PR groups, when the survival analysis was applied to patients with aaIPI scores of 2 and 3 (N=36) after excluding those with an aaIPI score of 1 (N=9). In our study, no tissue confirmations were made in patients from the PET-positive group. We presupposed that either the majority of the PET-positive true lesions converted to a lymphoma-free status after Auto-SCT or some of the PET-positive lesions might already have represented negative disease at the time of transplantation. Evaluations to check the disease response to induction chemoimmunotherapy might not play a role in prognosis prediction in the context of upfront Auto-SCT for DLBCL.

The role of interim PET/CT for predicting the outcomes in DLBCL patients has been debatable. Dupuis et al. [16] evaluated the prognostic impact of PET after 2 and 4 cycles of CHOP or CHOP-like chemotherapy with or without rituximab in 103 patients with DLBCL. The 5-year EFS rates were significantly higher in the PET-negative group than in the PET-positive group after 4 cycles of chemotherapy (80% vs. 36%, <0.0001). In contrast, Moskowitz et al. [17] conducted a prospective study to clarify the significance of interim PET by obtaining biopsies from 38 patients with an interim positive PET after 4 cycles of accelerated R-CHOP from among 97 patients with advanced-stage DLBCL. Thirty-three of the 38 PET positive patients had negative biopsy results, and the PFS in the 33 with PET-positive but biopsy negative disease did not significantly differ from that of the 59 PET-negative patients. The authors concluded that the interim FDG-PET evaluation did not predict the outcomes in response to an R-CHOP-like regimen in the DLBCL patients.

In conclusion, this registry-based retrospective analysis demonstrated a favorable long-term outcome of upfront consolidative HDT/ASCR for DLBCL. The OS and PFS rates according to the aaIPI, R-IPI, and PET status did not significantly differ between the subgroups. The outcome of the patients who achieved PR at the time of Auto-SCT did not significantly differ from that of the patients who achieved CR. R-CHOP induction therapy followed by Auto-SCT could bridge the survival gap between the CR and PR groups at the time of Auto-SCT.

Patient and disease characteristics at diagnosis. 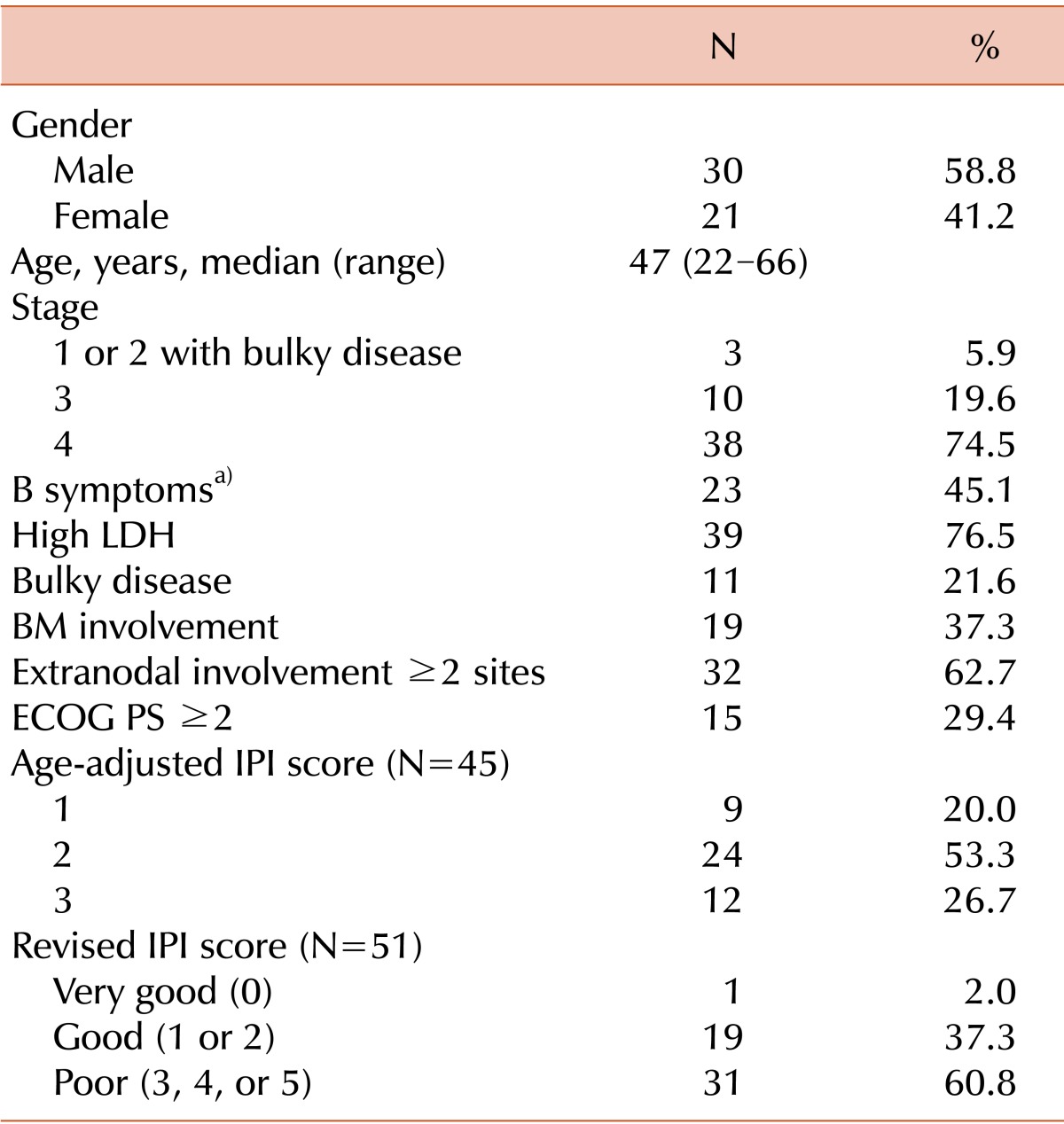 Treatments before ASCT and transplantation characteristics. 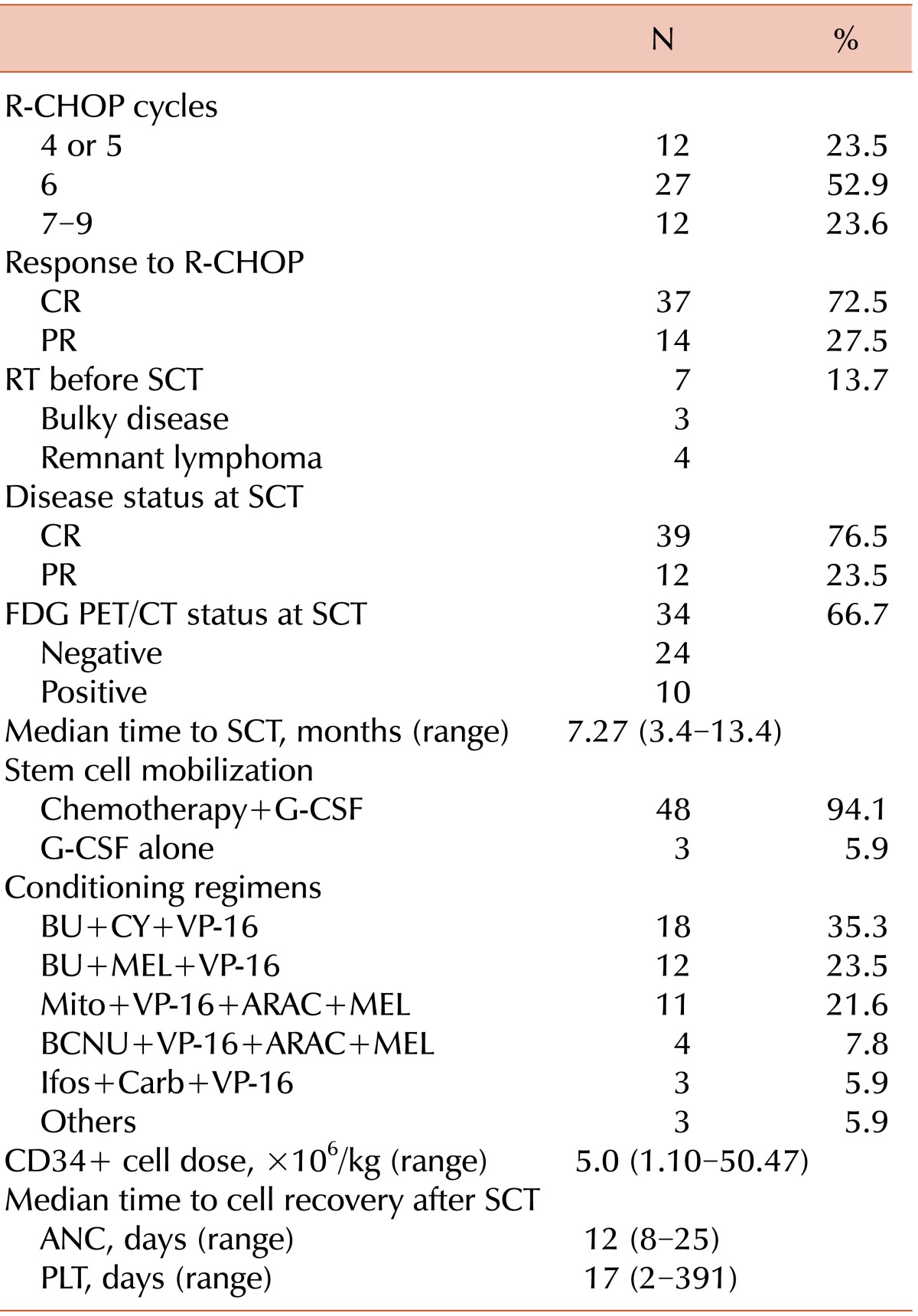