Sepsis in elderly patients is a major cause of morbidity and mortality in the clinical setting. The aim of this study was to assess the diagnostic significance of volume conductivity scatter (VCS) parameters and to compare their reliability with that of inflammatory markers.

MNV and MMV, which can be obtained easily using an automated blood analyzer, may be promising hematologic parameters for distinguishing elderly individuals with and without sepsis and may help clinicians in the diagnosis of sepsis.

Sepsis in elderly patients remains a critical clinical issue because of the high rates of morbidity and mortality. More than 60% of sepsis patients are over 65 years of age [1]. The increasing incidence of sepsis among elderly individuals is a major public health concern. Therefore, early and accurate diagnosis is vital to ensure that appropriate medical decisions are made. To this end, clinicians in intensive care units and emergency departments need to predict systemic infection at an early stage. However, early diagnosis of sepsis is difficult because the signs and symptoms of sepsis in elderly patients, such as fever, are nonspecific and may be blunted or absent [2, 3]. Therefore, laboratory findings are important in the diagnosis of sepsis.

Laboratory parameters such as WBC count, differential count, C-reactive protein (CRP) level, procalcitonin level, and blood culture results can provide valuable information for the diagnosis of sepsis. WBC count is routinely recommended as an initial screening marker. Elevated WBC and absolute neutrophil count as well as left-shifted neutrophils are associated with sepsis [4]. These parameters can be determined using an automated hematology analyzer, but the morphology of neutrophils should also be reviewed through peripheral blood (PB) smears. Immature granulocytes, such as band forms and reactive monocytes, tend to be larger and have lower nuclear complexity than their normal mature counterparts. PB smears, however, require manual examination and experienced medical technologists, and the results of PB smears are subjective because they depend not on instrument interpretation but on human interpretation. CRP has been shown to be a more sensitive and specific biomarker than WBC count [5]. Furthermore, procalcitonin levels distinguish bacterial from viral infections, correlate well with clinical severity [6, 7], and show higher predictive sensitivity than CRP [8]. Blood culture remains the gold standard for diagnosing septicemia; however, this method shows low sensitivity [9], requires an adequate amount of blood and proper collection techniques to avoid contamination, and can delay diagnosis as the results may require several days.

The latest automatic hematology analyzers, such as the Coulter DxH 800 (Beckman Coulter, Fullerton, CA), can use a variety of volume conductivity scatter (VCS) technologies. The VCS technology of the Coulter cell analysis system can directly obtain data from more than 8,000 WBCs using direct current impedance to measure cell volume (V) for accurate size of all cell types, radio frequency opacity to characterize conductivity (C) for internal composition of each cell, and a laser beam to measure light scatter (S) for cytoplasmic granularity and nuclear structure [10, 11]. In addition, a flow cytometry channel of the UniCel DxH 800 was introduced to provide better resolution and achieve new levels of performance [12]. This system can analyze individual cells using multiple angles of light scatter. There are 3 additional measurements of the scatter compared to that in previous Coulter models such as the LH750. Median angle light scatter (MALS), lower median angle light scatter (LMALS), and upper median angle light scatter (UMALS) provide information concerning granularity and the membrane surface, axial light loss measurement of cellular transparency, and the low angle light scatter (LALS) cellular complexity index, respectively [12]. An automated differential count using these data identifies each cell as a neutrophil, lymphocyte, monocyte, eosinophil, or basophil.

This study aimed at assessing the diagnostic significance of VCS parameters for sepsis in elderly patients and at comparing their reliability with that of inflammatory markers such as procalcitonin, CRP, and WBC count.

We retrospectively analyzed data from 85 patients who were more than 50 years old. The 85 patients were divided into 3 groups according to their clinical history and culture results: patients without signs of infection (N=29), patients with localized infection (N=38), and patients with systematic infection (N=18). Patients with systemic infection fulfilled the criteria of sepsis according to the American College of Chest Physicians (ACCP) guidelines [13]. Patients with localized infection presented with organ-specific infections such as pneumonia, urinary tract infection, acute pyelonephritis, and bronchopulmonary infections. Clinical signs (temperature>38.5℃ and purulent sputum) and positive results on chest radiography were the basis for diagnoses of pneumonia and bronchopulmonary infections. Clinical signs and positive results for urinary culture of significant pathogens defined urinary tract infection and acute pyelonephritis. Control patients (N=29) showed no symptoms of infection, such as fever, and had WBC and differential counts within normal limits. From all patients, blood samples for WBC count, differential count, and serum markers of inflammation levels were collected on the same day of blood culture collection. All septic patients (N=18) had positive blood cultures. Patients with systematic infection in which blood cultures yielded bacteria likely to be contaminants, such as coagulase-negative staphylococci, were excluded from the study.

Statistical analysis was performed using the SPSS software, version 13.0 (SPSS, Chicago, IL, USA). Results are expressed as mean±standard deviation. Sepsis parameters were compared between the different groups using analysis of variance (ANOVA) and subsequent post hoc range tests. value<0.05 was considered statistically significant. The diagnostic properties of each test were investigated by receiver operator characteristic (ROC) curves. The optimum cutoff value for each variable was tested. The sensitivity, specificity, and area under the ROC curve were then assessed.

Evaluation of sensitivity and specificity in predicting sepsis

The sensitivity and specificity for inflammatory markers such as MNV, MMV, and procalcitonin were calculated at selected cut-off points. These data are shown in the ROC curves (Fig. 1) and Table 2.

WBC count as well as the percentage of neutrophils and immature granulocytes can be measured using automated hematology analyzers and have been used to predict infection [4]. Manual PB examination can also provide useful diagnostic information such as morphologic changes in neutrophils, including toxic granulation, toxic vacuolization, and the presence of Döhle bodies [14]. However, manual slide differential counting is labor-intensive and time-consuming. Furthermore, the 100-cell differential count has problems associated with imprecision, insensitivity, interobserver variation, and variation owing to the heterogeneous distribution of leukocytes on blood films [4].

In the present study, we demonstrated that morphologic changes in neutrophils (MNV) and monocytes (MMV) are observed in left-shifted reactive neutrophils and monocytes during sepsis in elderly patients and could be quantitatively evaluated by VCS technology using the UniCel DxH 800 hematology analyzer. We demonstrated that sepsis patients had higher MNV values and lower MNC and LMALS of MNS values than non-sepsis patients. However, only the MNV value could discriminate between the sepsis, localized infection, and control groups. We also showed that MMV was higher in the sepsis group than in non-sepsis patients. Therefore, MNV and MMV may be useful as discriminators to distinguish between sepsis and non-sepsis patients.

The use of VCS parameters in the clinic setting can provide several advantages. First, these parameters are determined during differential analysis without additional specimen requirements [14]. Second, determining these values is not labor-intensive or time-consuming, which are issues in manual differentiation. Finally, these values are more accurate, objective, and quantitative than manual differential counts because more than 8,000 WBCs are evaluated automatically with the VCS instrument [11].

In this study, the clinical usefulness of VCS parameters was determined by evaluating the sensitivity and specificity of these parameters against CRP and procalcitonin, which are commonly used laboratory values for diagnosing bacterial infection and bacteremia. Of these indicators, procalcitonin had the highest sensitivity for predicting infection. However, MNV had the highest specificity and only a slightly lower sensitivity than procalcitonin. Measurement of CBC is typically routinely performed as part of the workup for sepsis patients. Therefore, MNV has the potential to be used as an additional marker of sepsis at a lower cost than the current markers.

The UniCel DxH 800 Coulter cellular analysis system contributes to improving differential accuracy and flagging efficiencies by combining additional light scatter measurements such as UMALS, LMALS, LALS, and AL. It reduces the working time and costs compared to previous automated hematology analyzers such as the Coulter LH 750 and 755 [12].

This study is a retrospective study and is limited by its small sample size and highly selected group. These limitations may have led to incorporation bias overestimating the diagnostic power of the investigated markers. Larger prospective cohort studies are needed to further validate the clinical usefulness of VCS parameters. Clinical scores with regard to organ failure and outcome such as the Acute Physiology and Chronic Health (APACHE) score should also be used to quantitatively evaluate the patient group. Other clinical applications of the VCS parameters should be evaluated in other neutrophilic leukocytosis, including pathological left shifts in cases of chronic inflammation, tumors, myeloproliferative neoplasms, and granulocyte colony stimulating factor stimulation. Further, whether the quality and accuracy of VCS data depend on certain techniques of a specific brand of automated hematology analyzers should be investigated.

In conclusion, MNV and MMV values, which are easily obtained by an automated blood analyzer, may be promising hematologic parameters for differentiating between sepsis and non-sepsis cases in elderly patients, as well as for helping clinicians diagnose sepsis.

Characteristics, parameters of infection and inflammation, and VCS parameters. 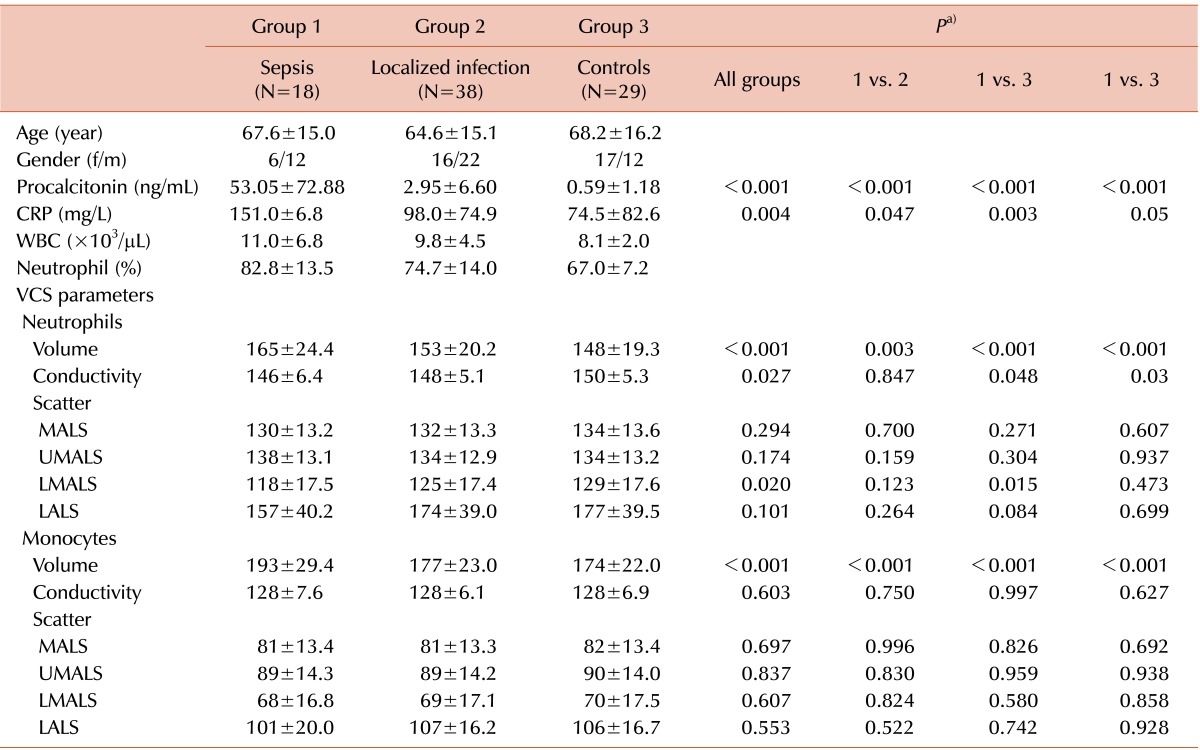 Sensitivity and specificity at the designated cut-off values of inflammatory markers for predicting sepsis.