Immune tolerance induction (ITI) can reduce inhibitors against factor VIII concentrates by 70-80%. In this study, we elucidated the characteristics of inhibitors and attempted to determine the proper indications and timing for ITI.

Subjects included hemophilia A patients registered at the Korea Hemophilia Foundation from 1991 through 2014. Inhibitors were classified as persistent and transient. Patients were classified into groups according to peak inhibitor titer: low (<2 BU/mL), moderate (2 to <5 BU/mL), high (5 to <10 BU/mL), and very high titer (≥10 BU/mL).

Given the spontaneous disappearance of inhibitors and high cost of ITI, it is worthwhile to postpone ITI for 11 months unless the peak inhibitor titer is greater than 10 BU/mL.

Hemophilia A is one of the most common gene mutation-induced bleeding disorders. Patients with hemophilia lack coagulation factors. Accordingly, replacement therapy with concentrates of the insufficient factors has been a mainstay since the late 1960s. Factor replacement therapy can improve both the quality of life and life expectancy of patients with hemophilia. However, many patients experience factor concentrate-related complications. One major complication is the development of inhibitors to factor concentrates. Inhibitors that are immunoglobulin G (IgG) antibodies [1] bind to the active sites of factor VIII (FVIII) or factor IX (FIX) molecules and neutralize the clotting functions. The development of an inhibitor renders hemostasis more difficult, increases disability [2], and reduces the quality of life [3] and life expectancy [4].

Inhibitors usually develop during an early stage of treatment; 95% of inhibitors occur during the first 50 exposure days (EDs), and >99% during the first 100 EDs [9]. Several risk factors are known to influence inhibitor development including gene mutations, major histocompatibility complex expression, intensity of therapy, family history of inhibitors, and ethnicity.

We investigated the long-term course of inhibitor development to factor VIII concentrates at a single center. Through this study, we hoped to elucidate the characteristics of inhibitors and aimed to find the proper indications and timing for ITI.

Inhibitor titers usually begin to increase 2–3 days after exposure to factor VIII, reach a maximum within 7–21 days, and then decrease slowly [17]. The treatment modality depends on the inhibitor titer level. Generally, in low-titer cases, a high-dose infusion of factor concentrate can achieve hemostasis. Patients with high titers must be treated with BPAs. However, ITI can reduce inhibitors permanently by 80–85% and may therefore be preferable. However, several hurdles may hinder the use of ITI. The large injection volume, poor venous access, long duration, and patient compliance may deteriorate ITI performance. The main issue, however, is the high cost of the factor concentrates required for ITI. Even low-dose ITI consumes an amount of factor concentrates equivalent to 5,000 USD per kg of body weight during a single year [16]. Obviously, the overall treatment cost throughout the lifespan of a patient with inhibitors is much more expensive than ITI [3]. However, the extreme costs currently allow the performance of ITI only in well-funded countries.

In this context, the consensus recommendation for ITI, which addresses a waiting period of 1–2 years during which the inhibitor titer may fall below 10 BU/mL, is more understandable [18]. Inhibitor levels of <10 BU/mL can be more easily cured with ITI, and transient inhibitors may largely disappear during that time period [14]. Hence, the consensus recommendation states that unless life-threatening bleedings occur, ITI can be postponed for at least 1–2 years after the development of inhibitors [18]. However, most of the reports regarding long-term courses of inhibitors have included very limited numbers of cases. To our knowledge, this study includes the largest number of subjects in an investigation of the long-term courses of inhibitors.

Almost all subjects in this study (except for 12 patients) were treated with routine hemostatic dosages, even though they developed high levels of inhibitors and bled frequently. This can be explained by the fact that 60% of the transient inhibitor patients were detected in the early 1990s, when strong constraints were placed on the utilization of medical resources in Korea. Regarding inhibitor titers <2 BU/mL, almost all transient inhibitor patients continued to receive the same dosages of the same clotting factor concentrates that had been used before inhibitor development. Only 1 patient switched to another drug. Further study is required to compare the efficacy of routine hemostatic dosages and large-dose factor replacement.

Regarding gene mutation, the present study suggests that missense and large deletion mutations might have protective and provocative effects on inhibitor development. Compared to a study by Rosetti et al., the influences of those 2 mutations were identical in present study. Notably, intron 22 inversion, which was significantly risky in their study, was not significantly risky in our study [22]. Although genotype is considered the only proven influence on inhibitor development [23], the relationship between inhibitor development risk and mutation type must be interpreted very cautiously. Specifically, biases related to sample size, inhibitor testing, and ethnic differences may exist. Further study on this subject is needed.

Based on this study, we found that the majority of inhibitors (71.4%) disappeared without ITI within 11.0 months. ITI consumes huge amounts of factor concentrates. Accordingly, if the recorded peak inhibitor titer is <10 BU/mL and no life-threatening bleeding is present, it is worthwhile to wait and observe the clinical manifestations and inhibitor course. However, the inhibitor disappearance rate at peak titers ≥10 BU/mL was only 21.7%. Low-dose ITI can achieve immune tolerance even in patients with very high titers. Moreover, a recent report stated that prompt ITI initiation (≤1 mo after inhibitor detection) for these high titer patients was more successful than later ITI (>1 mo) [24]. It is more reasonable to initiate ITI as soon as possible for patients with inhibitor titers >10 BU/mL.

Inhibitor status according to hemophilia A phenotypes. The severer phenotypes patients have, the more frequent inhibitors the patients developed (<0.001). However the proportion of persistent inhibitors to transient inhibitors was not significantly higher in severe patients in comparison with the mild and moderate patients (=0.221). Abbreviations: PWH, patient with hemophilia; INH, inhibitor.

Tables
Table 1 Characteristics of patients with inhibitors against factor VIII.

Table 2 Long-term follow up of patients with transient inhibitors against factor VIII. 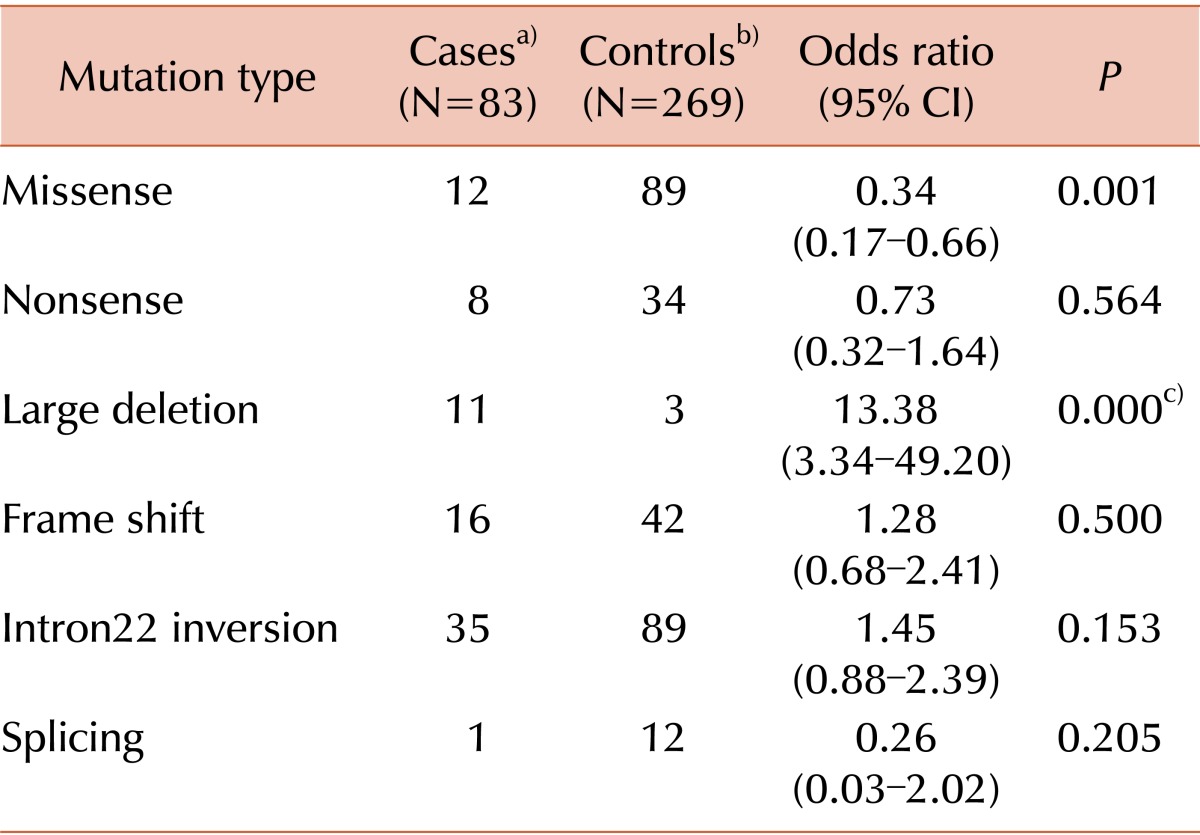