T-cell large granular lymphocytic leukemia (T-LGL) is a rare clonal hematological disorder characterized by peripheral blood and bone marrow lymphocytic infiltration with large granular lymphocytes (LGLs), splenomegaly, and cytopenia, of which neutropenia is most common [1]. T-LGL is characterized by persistent increases in LGLs ranging from 2×109/L to 20×109/L on peripheral blood in the absence of a reactive cause [2]. The exact pathogenesis is unknown, but is believed to result from clonal expansion of mature postthymic T cells [3]. T-LGL typically presents in the sixth decade of life, with an equal male to female ratio [4]. Approximately 40% of patients have an associated autoimmune disorder, most commonly rheumatoid arthritis (RA), pure red cell aplasia, or immune thrombocytopenia [5]. Approximately one third of patients are asymptomatic when routine blood counts reveal cytopenia and LGL, which leads to diagnosis. The symptoms, if present, are related to cytopenia [6].

Bone marrow aspirate may be required to confirm the diagnosis, especially in those with low absolute numbers of circulating LGLs. Patients with T-LGL have a median survival of more than 10 years [7]. The most common indications for treatment are cytopenia, recurrent infection, pure red cell aplasia, progressive splenomegaly, and B symptoms [8]. The reported incidence of T-LGL is 2-5% of the chronic lymphoproliferative disorders (LPDs) in North America and about 6% in Asia [9]. The incidence and prevalence is not known in Pakistan. In this case series, we describe the laboratory findings and clinical courses of 4 patients diagnosed with T-LGL in a tertiary care hospital.

The first case was a 24-year-old man who presented with lymphocytosis in November 2010. His physical examination was unremarkable and showed no hepatosplenomegaly or lymphadenopathy. A complete blood cell (CBC) count revealed lymphocytosis with the presence of LGLs (Table 1). Based on bone marrow morphological and immunophenotypic assessments, the patient was diagnosed with T-LGL (Table 1). His follow-up visits showed persistent lymphocytosis with a declining platelet count. On his follow-up in December 2013, CBC revealed hemoglobin (Hb), 13.5 g/dL; white blood cell (WBC) count, 17.9×109/L with an absolute lymphocyte count (ALC) of 11.4×109/L; and platelets, 93×109/L.

The second case was a 61-year-old man who was referred in November 2010 for assessment of persistent lymphocytosis lasting for about 7 months. His physical examination was unremarkable. CBC showed lymphocytosis, whereas blood smear, bone marrow morphology, and immunophenotyping were consistent with T-LGL (Table 1). He remained asymptomatic throughout the disease course without any treatment. His CBC in August 2013 revealed Hb, 14 g/dL; WBC, 7.6×109/L with an ALC of 5.3×109/L; and platelets, 100×109/L.

The third case was a 61-year-old man who was diagnosed with hairy cell leukemia (HCL) in 1992 after morphological findings from peripheral smear/bone marrow and underwent splenectomy as the sole treatment for HCL. He was then lost to follow-up until 1998, when he presented with recurrent chest infections. His physical examination was unremarkable, whereas CBC revealed lymphocytosis and LGLs on peripheral smear (Table 1). Subsequent examination of bone marrow morphology and immunophenotyping was consistent with T-LGL (Table 1). During follow-up visits, he continued to have chest infections and was started on low-dose oral methotrexate 5 mg once daily for 7 days in a 4-week cycle. He responded well to treatment and the repeated infections resolved. He is still on the regimen and is asymptomatic. His most recent follow-up CBC revealed Hb, 12.5 g/dL; WBC, 19.5×109/L with an ALC of 12×109/L; and platelets, 181×109/L.

The forth case was a 62-year-old woman who presented with persistent lymphocytosis for 10 months in 2010. Her physical examination was unremarkable. She had lichen sclerosis that was diagnosed in 1996 and was treated with topical steroids. Peripheral smear, bone marrow examination, and immunophenotyping were consistent with CD8+ T-LGL (Table 1). In the most recent follow-up visit, she was well and a CBC revealed Hb, 11.7 g/dL; WBC, 7.6×109/L with an ALC of 4.3×109/L; and platelets, 242×109/L.

This case series illustrates the clinicopathological features of T-LGL, which was first described in 1977 as a syndrome displaying increased circulating LGLs and chronic neutropenia [10]. Approximately 40% of cases are asymptomatic and are discovered incidentally through persistent neutropenia, asymptomatic lymphocytosis, or as an associated phenomenon with autoimmune disorders such as RA. Peripheral smear examination is very helpful in such cases.

In our clinical experience of more than 15 years in a tertiary care hospital where patients are referred from all regions of the country, we have seen 4 T-LGL cases. T-LGL is not only rare, it can also be easily missed if peripheral smears are not reviewed, especially in patients with neutropenia. In these cases, the median age at presentation was 61 years, which is comparable with the literature [11]. Only 1 of our patients was female.

Natural killer cell lymphoproliferative disorder was excluded in these patients on the basis of positivity for surface CD3 and characteristic morphology of LGLs. The most common presentation was persistent lymphocytosis, with an LGL count ranging from 7.8×109/L to 20×109/L [12]. None of our patients presented with neutropenia or splenomegaly, as has been reported in the literature [1, 5]. There was no clinical or serological evidence of RA or other autoimmune disorder.

Case 3 had various interesting issues. First, he had HCL, for which he had a splenectomy. A literature review revealed sporadic cases of T-LGL with other B-cell lymphoproliferative disorders, including chronic lymphocytic leukemia, HCL, and multiple myeloma [13]. In most cases in the literature, there were simultaneous occurrences of B-cell lymphoproliferative disorders and T-LGL [13], whereas because our patient was lost to follow-up, it could not be clearly delineated that the HCL transformed to T-LGL or if it was a second malignancy. Peripheral smear and bone marrow showed LGL only, and flow cytometry revealed expression of all T-cell markers but not B-cell markers and CD11c. Second, increased numbers of LGLs have been found in splenectomized patients [14]. LGL clonality has been supported by flow cytometry results, and, in our case, clinical behavior. Third, recurrent infections requiring treatment can be related to CD56 expression associated with a relatively aggressive clinical course [15].

Currently, there is no standard treatment for patients with T-LGL. For asymptomatic T-LGL patients with an indolent course, a wait-and-see approach can be considered [11]. In our series, all 4 patients are alive and stable, with a slowly declining trend of platelets during the more than 3-year follow-up. T-LGL clonality could not be confirmed by a T-cell receptor gene rearrangement in our cases because our facility lacks this capacity. The clinical features and laboratory findings of the T-LGL patients in our study were similar to that reported in the literature. It remains unclear if the incidence is truly low or the disease has been underdiagnosed because most cases are asymptomatic on presentation. This raises the importance of reviewing the peripheral smears in asymptomatic patients who have persistent lymphocytosis or neutropenia. Systematic long-term follow-up studies need to be performed.

Laboratory findings of the patients with T-LGL. 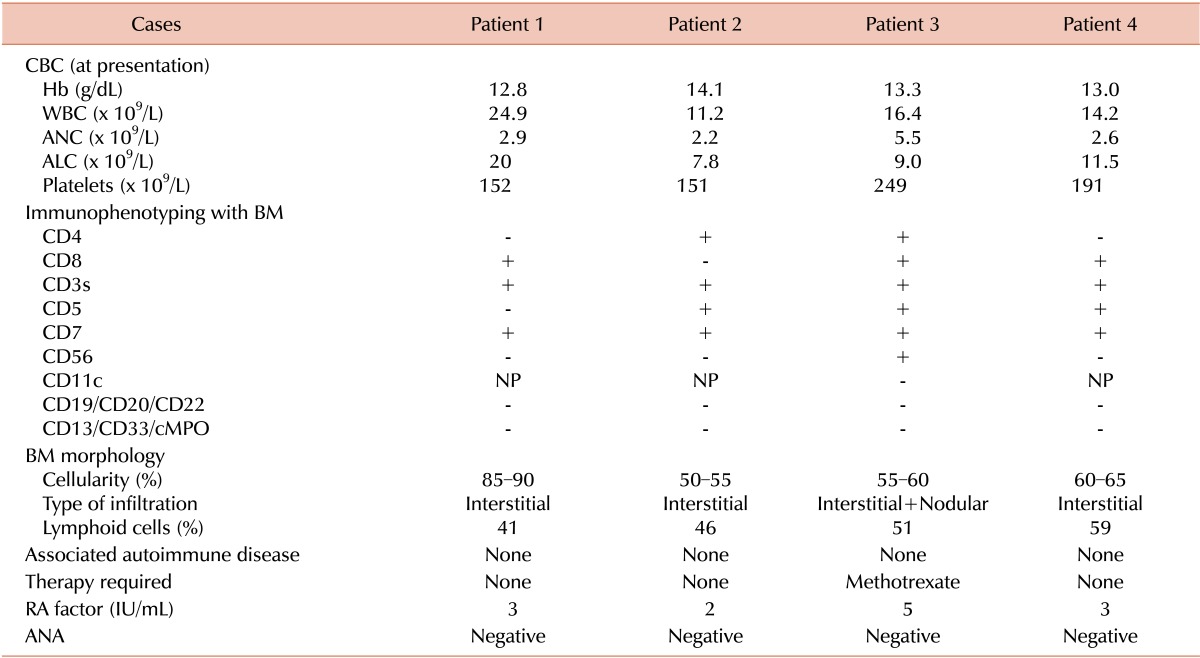