Hyperleukocytosis caused by acute lymphoblastic leukemia (ALL) is associated with early morbidity and mortality due to hyperviscosity arising from the excessive number of leukocytes.This study was designed to assess the incidence of hyperleukocytosis, survival outcomes, and adverse features among pediatric ALL patients with hyperleukocytosis.

Between January 2001 and December 2010, 104 children with previously untreated ALL were enrolled at the Pusan National University Hospital. All of them were initially stratified based on the National Cancer Institute (NCI) risk; 48 (46.2%) were diagnosed with high-risk ALL. The medical charts of these patients were retrospectively reviewed.

The outcome of pediatric ALL cases with an initial leukocyte count >200×109/L was very poor, probably due to early toxicity-related death during induction therapy.

Recent advances in the treatment of pediatric acute lymphocytic leukemia (ALL) have prolonged the survival of these patients. The initial leukocyte count in these cases is a particularly strong predictor of complete remission (CR) induction and event free survival (EFS). Hyperleukocytosis caused by ALL is associated with early morbidity and mortality due to the hyperviscosity created by the high leukocyte count [1, 2, 3, 4, 5]. Pediatric ALL patients who initially present with hyperleukocytosis are at risk of early complications that lead to a mortality rate as high as 20% during remission induction therapy [3, 5]. However, very few studies from developed countries have addressed childhood ALL with hyperleukocytosis. The purpose of this study was to compare the therapeutic outcomes, incidence, clinical characteristics, and complications during induction therapy among pediatric ALL patiens according to the degree of hyperleukocytosis at presentation.

Between January 2001 and December 2010, 104 children with previously untreated ALL were enrolled at the Pusan National University Hospital, all of whom were initially stratified by age and initial leukocyte count. Patients aged 1-10 years and with an initial leukocyte count of <50×109/L were classified as having standard-risk ALL, and patients aged >10 years or with an initial leukocyte count >50×109/L were classified as having high-risk ALL. Fifty-six (53.8%) of the children were diagnosed as having standard-risk ALL, 48 (46.2%) were diagnosed as having high-risk ALL, and 20 (19.2%) had an initial leukocyte count of >100×109/L. The treatment protocol used to treat the 48 high-risk ALL cases was a modified version of the Children's Cancer Group (CCG)-1882 and CCG-1961. The induction regimen comprised the administration of prednisolone, vincristine, daunomycin and L-asparaginase. Bone marrow samples were examined after completion of induction therapy (day 28). If CR was confirmed, patients received consolidation chemotherapy with cyclophosphamide, 6-mercaptopurine, cytosine arabinoside, and methotrexate for 5 weeks. After 8 weeks of interim maintenance chemotherapy, patients received reinduction and reconsolidation chemotherapy for 7 weeks. Finally, patients received maintenance chemotherapy consisting of 6-mercaptopurine and methotrexate for 2.5-3.0 years. Patients who sufferd from bone marrow relapse during treatment or patients with unfavorable cytogenetic abnormalities such as t(9;22), t(4;11) at first CR received stem cell transplantation, if they had a human leukocyte antigen-matched sibling donor. The medical charts of the 48 high-risk ALL patients were reviewed retrospectively. The incidence, clinical characteristics, laboratory findings, early complications, CR rates, and outcomes of ALL patients with hyperleukocytosis were compared with those of the high-risk ALL patients without hyperleukocytosis.

All patients received continuous intravenous fluids for hydration and urinary alkalinization and allopurinol for at least 5 days during induction chemotherapy. Patients with hyperphosphatemia were also administered aluminum hydroxide. None of the patients underwent prophylactic leukapheresis, cranial irradiation or urate oxidase treatment. However, patients who developed tumor lysis syndrome or renal dysfunction were treated with hemodialysis. Early mortality in this study refers to the death within 1 month of diagnosis.

This clinical data was analyzed by using SPSS 18.0 with linear by linear association, ANOVA, or Fisher exact test followed by the Bonferroni correction. EFS and overall survival (OS) were estimated for various patient subgroups by using the Kaplan-Meier method, and the log-rank test was used to compare survival curves between groups. Cox regression analysis was performed to evaluate predictors of adverse events. -values <0.05 were considered statistically significant.

Factors related to the development of hyperleukocytosis in childhood ALL are age <1 year, male gender, T-cell phenotype, mediastinal mass, massive hepatosplenomegaly, and cytogenetic abnormalities (11q23 rearrangement, presence of the Philadelphia chromosome, and loss of p16 expression) [1, 8, 12]. It is also possible that leukemic cell ploidy of <50 chromosomes, CNS leukemia at diagnosis, and a high LDH level (>1,000 mg/dL) have a role in the development of hyperleukocytosis in ALL [1]. In this study, we found that an age 1-10 years at diagnosis, T-cell phenotype and massive splenomegaly were associated with ALL and hyperleukocytosis.

One of the immediate therapeutic problems in the management of patients with hyperleukocytosis is related to acute metabolic complications secondary to tumor lysis syndrome [1, 2, 11]. The rapid destruction of leukemic blasts because of chemotherapy may produce massive release of intracellular potassium and phosphate, which in tum results in acute renal dysfunction. Of these, hyperphosphatemia is the most common complication necessitating hemodialysis [3], although in our study, hyperkalemia was the most frequent metabolic complication in ALL patients with hyperleukocytosis.

Leukocytoreduction can be achieved by performing induction chemotherapy and leukapheresis, and by using hydoxyurea [6]. The use of leukapheresis to reduce tumor burden in ALL patients with hyperleukocytosis is still controversial [3, 4]. Leukapheresis immediately removes circulating blasts and corrects metabolic abnormalities. It reduces early morbidity and mortality of newly diagnosed AML patients, but there is no evidence that it extends long-term survival [10, 13, 14]. In addition, Porcu et al. [15] did not report any difference in the early mortality of patients treated with leukocytapheresis compared with those who did not receive this treatment. Lowe et al. [5] analyzed 178 childhood ALL cases, in which the leukocyte count was above 200×109/L, 94 of which were treated with leukapheresis and exchange transfusion. Cytoreduction was not successful in reducing CNS hemorrhage or pulmonary complications, because these were mostly present before cytoreduction. The disadvantages of leukapheresis are the potential complications caused by the placement and maintenance of central venous catheters and the need for specialized equipment and trained personnel; therefore, it is not widely used [6, 16]. In this study, none of the patients underwent prophylactic leukapheresis, but all the ALL patients with hyperleukocytosis received vigorous hydration treatment as well as urinary alkalinization during induction chemotherapy.

In summary, our study demonstrates that, with improved management including intensive chemotherapy, the outcome of ALL with initial leukocyte counts of 100-200×109/L can be significantly improved. Howerver, the outcomes of ALL patients with an initial leukocyte count of >200×109/L at presentation remains very poor, probably as a result of early toxicity-related death during induction.

Kaplan-Meier estimates of event free survival of children with high-risk ALL (=0.04).

Kaplan-Meier estimate of overall survival of children with high-risk ALL (=0.09).

Clinical characteristics of children with high-risk ALL. 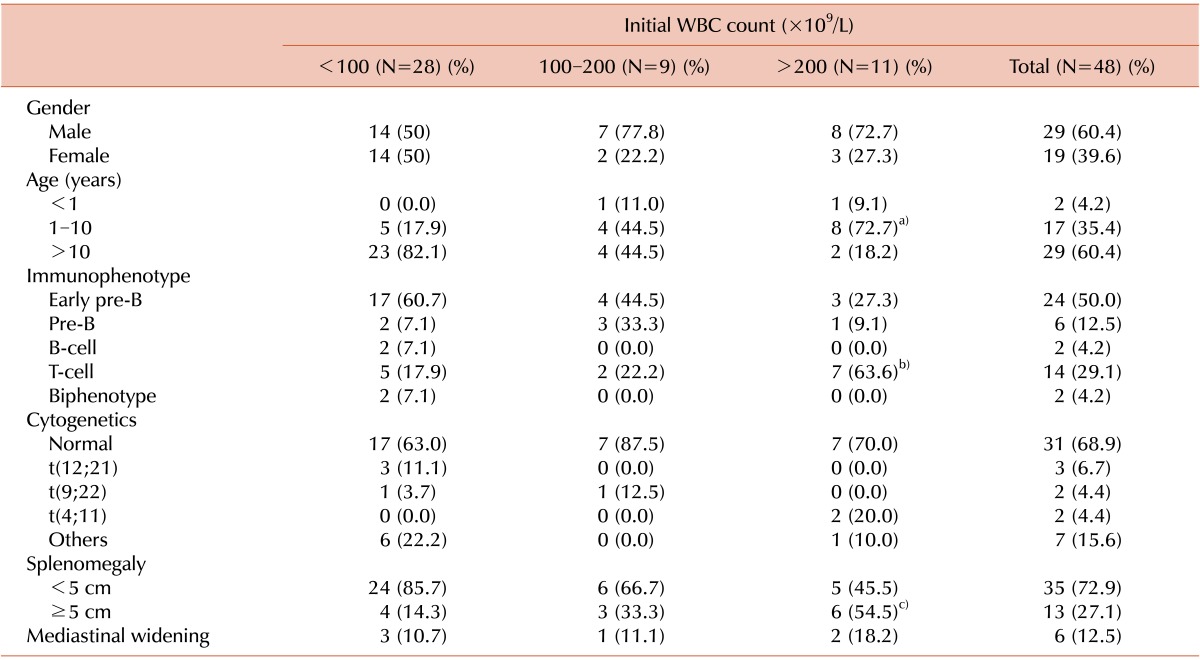 Laboratory findings for children with high-risk ALL.

Early complications in children with high-risk ALL.

Therapeutic responses in children with high risk ALL.