Intraocular lymphoma (IOL) is a rare malignant lymphoma that most closely resembles a diffuse large B-cell lymphoma, and it is a subtype of primary central nervous system lymphoma (PCNSL). IOL is located inside the eye in the retina, uvea, and/or optic nerve. We retrospectively analyzed IOL patient data to identify treatment patterns and survival rates in Korea.

Cytological confirmation for a diagnosis of IOL was performed for all patients. The clinical data collected from medical records included Ann Arbor stage, International Prognostic Index, performance status, date of diagnosis, treatment modality and response, date of relapse, and date of last follow-up.

Twenty patients who were diagnosed with IOL, between December 2007 and June 2014 at multiple centers in Korea, were included in the analysis. Four patients were diagnosed with IOL alone, not involving the CNS. Two patients with isolated IOL later developed PCNSL. Nine patients developed CNS lesions before the onset of ocular lymphoma. Five patients had simultaneous onset in the eye and CNS. Twelve patients were treated by intravitreal injection of methotrexate for IOL. The median progression-free survival (PFS) for patients was 19.7 months (95% CI, 8.7-30.7 mo). The estimated 3-year overall survival (OS) for all patients was 75.1%.

Intraocular lymphoma (IOL) is a rare malignant lymphoma that most closely resembles a diffuse large B-cell lymphoma, and it is a subtype of primary central nervous system lymphoma (PCNSL) [12]. IOL constitutes <1% of intraocular tumors and 1% of non-Hodgkin's lymphoma [3]. IOL is a heterogeneous group of lymphomas that can be located in different tissues within the eyes, including the retina, uvea, and optic nerve. According to the WHO classification, IOL can be classified as vitreoretinal lymphoma (VRL) or uveal lymphoma. VRL may involve the retina, whereas uveal lymphoma may be further sub-classified as choroidal, ciliary body, or iridal. Most IOL cases are primary VRL rather than uveal lymphoma.

IOL was first described in 1951 as "malignant lymphoma of the uveal tract" [4]. Since then, there have been several reports of IOL. Blurred vision, reduced vision, and floaters are the common initial subjective symptoms [5]. Among IOL patients, the percentage of cases that involve the CNS is 60-80% [5]. Manifested symptoms of PCNSL are very different, depending on the presence of a brain lesion.

IOL is an aggressive lymphoma that requires early diagnosis and treatment for a good prognosis [6]. However, a uniform method of IOL diagnosis and treatment has not yet been established owing to the low incidence. Definitive diagnosis of IOL requires histopathologic evidence of malignant lymphoma cells in ocular specimens. However, IOL can be misdiagnosed as intraocular inflammation [7]. Therefore, several supplementary diagnostic methods are currently used to support the diagnosis of IOL, including cytokine, molecular, and genetic analyses. Treatment modalities for IOL include intravitreal injection, systemic chemotherapy, and radiotherapy, used alone or in an appropriate combination. Treatment protocols for IOL have not been validated [8].

Recently, IOL has received increasing attention following reported reviews of a large number of cases in America and Japan [59]. However, there are no large scale studies of IOL in Korea [10]. Hence, its clinical manifestation, treatment, and prognosis remain unclear. In this multicenter, retrospective study, we reviewed cases of IOL diagnosed by cytology. We presented the clinical features associated with PCNSL and discussed diagnosis and treatment.

Twenty patients who were diagnosed with IOL, between December 2007 and June 2014 at multiple centers in Korea, were included in the analysis. The criteria for case inclusion was pathologically confirmed IOL through morphologic findings. All suspected IOL patients were confirmed by cytology. Included patients had (1) primary IOL only, (2) PCNSL and IOL simultaneously, or (3) PCNSL without ocular involvement at diagnosis that subsequently arose. Institutional review approval was obtained for the retrospective study (DAUH-IRB-13-161).

Overall survival (OS) and progression-free survival (PFS) were estimated using the Kaplan-Meier product-limit method. OS was measured from the date of treatment to the date of death or the last follow-up visit. PFS was calculated from the date of diagnosis of IOL to the first documented progression, death, or the last follow-up visit. Survival rates were compared for statistical differences by using log-rank analysis. Data were analyzed using IBM SPSS Statistics version 20.0.

In the current study, we reviewed cases of IOL in Korea diagnosed by cytology and presented the associated clinical features. IOL has a low incidence with very few previous reports; hence, we identified only 20 cases. Of the different treatments for IOL, intravitreal MTX injection was the most common. Nine PCNSL patients were diagnosed with ocular lesions during follow-up, with a median time between diagnoses of 19 months.

IOL commonly develops in individuals aged 50 to 60 years old, and the ratio of male to female patients is 1.0:1.5 [11]. In our study, the median age of IOL patients was 58.7 years, similar to the reported statistics, but there were more men compared to women. In 1987, Freeman et al. [12] reported 32 cases (18 ocular and CNS, 7 ocular only, and 7 others) in which patients had a 5-year survival rate of <30%. In a Japanese study by Kimura et al. [5], the 5-year survival rate improved to 61.1%. Compared with the two previous reports, the higher IOL survival rate in our study may have shown due to the improvement in the diagnosis and treatment of lymphoma. In this study, the median PFS of patients was 19.7 months (95% CI, 8.7-30.7 mo), and the estimated 3-year OS of all patients was 75.1%. The good prognosis can be explained by the higher proportion of primary IOL among the enrolled patients. IOL patients presenting ocular symptoms have a relatively good prognosis, whereas the patients with PCNSL and later ocular involvement have a poor survival prognosis. Primary IOL was present in 4 patients. The onset of CNS lesions and subsequent onset of ocular lesions led to a median PFS of 25.4 months (95% CI, 18.0-48.3 mo) and a 90% 3-year OS rate. The other 11 patients had a median PFS of 12.5 months (95% CI, 6.0-19.0 mo) and a 53.3% 3-year OS rate. However, there was no statistical difference among OS of the two groups in our study.

Two patients with isolated IOL developed PCNSL subsequently and the intervals between their onset of the primary ocular lesion and the secondary CNS lesion were 20 months and 7 months. Whereas the median interval between the onset of primary CNS lesions and secondary ocular lesion was 19 months (range, 5-48 mo) for 9 patients. Kimura et al. [5] reported that the interval between the onset of primary ocular lesions and subsequent onset of CNS lesions was significantly longer than that between the onset of primary CNS lesions and subsequent onset of ocular lesions. This suggests that primary IOL tends to be relatively slow progressing, and regular follow-up, including appropriate neuroimaging, is important for these patients after treatment since they carry a risk for recurrence for several years after the disease has been dormant. Compared with the Japanese study, the onset pattern of IOL observed here was quite different. The patients with the most common onset pattern of IOL (45%) exhibited subsequent manifestation of PCNSL, but the Japanese study was mostly consisted of primary IOL (82.5%). The method of IOL diagnosis could be the main reason for this difference. In our study, all cases were confirmed by cytology and not cytokine analysis. Cytokine analysis (intravitreal IL-10/IL-6 ratio >1.0) and gene rearrangement of the vitreous specimens were used in the Japanese data. Positive rates of IOL diagnosis by cytokine analysis (91.7%) and gene rearrangement (80.6%) are much higher compared to those on cytological examination (44.5%) [5]. Therefore, more early detection could be possible. Vitrectomy was first performed for diagnosis of IOL in 1975 [13]. In the past 3 decades, diagnostic vitrectomies have become the accepted and preferred procedure for diagnosing IOL, thus replacing brain biopsy. The paucity of lymphoma cells in the vitreous make adequate tissue harvest and preservation for cytologic analysis a challenge [14]. Fine needle aspiration of the vitreous also yields cytologic vitreous specimens. Cytological examination of vitreous biopsy specimens is reported to achieve a very high positive rate [15]. However, the false-negative rate is about 50%. This could be due to corticosteroids administered because of misdiagnosed inflammation or the effects of whole brain irradiation treatment for PCNSL [5]. Recently, supplementary diagnostic tools, including those to detect the IL-10/IL-6 ratio and gene rearrangement, were developed. Cytokine analysis of the vitreous specimens is a supplementary diagnostic method and an intravitreal IL-10/IL-6 ratio >1.0 is suggested as the diagnostic criteria for lymphoma. The sensitivity based on this criterion is reported as 75% [16], whereas that of detecting gene arrangements is 64% [17]. There is a need for supplementary diagnostic methods in future clinical practice.

Until now, treatment guidelines had not been established. The ultimate goal of treatment is to eradicate the IOL cells, eliminating the potential reservoir of untreated disease that could cause recurrence or CNS extension [18]. In our study, intravitreal MTX injection was the most common treatment for IOL, as it was used in 12 patients. Four patients received radiation treatment. Radiation to the eye is used for treatment of IOL and induces an ocular remission. However, radiation therapy has limitations. Hoffman et al. [11] reported that five out of nine patients who received radiation therapy had recurrence, and orbital irradiation caused ocular toxicities, including cataract, radiation retinopathy, optic neuropathy, and dry eyes. In recent years, a protocol for treating IOL with intravitreal injections of MTX was developed at the Oregon Health & Science University [19]. This treatment effectively induced clinical remission of IOL with acceptable morbidity. Treatment with intravitreal MTX injections resulted in some complications, such as keratopathy, acceleration of existing cataract, and neovascularization of the iris [20].

This study collected cases of IOL from multi-centers for about 7 years in Korea. Because it was not a cohort study, we cannot know the actual incidence of IOL. This is one of the major limitations of the study. The other limitations of our study are its retrospective nature, the small sample size, and the different treatment methods. IOL is a very rare lymphoma. Hence our study enrolled only 20 patients. Blurred vision and ataxia were the most common ocular and extra-ocular symptoms that prompted patients to seek medical examination in the Japanese data [5], but we were unable to examine information about sign and symptom because of the lack of medical data.

IOL remains a clinical diagnostic challenge. Patients with suspected IOL should undergo histocytologic examination of vitreal fluid or vitrectomy before steroid therapy. Once IOL is diagnosed, all patients are required to be screened in collaboration with an oncologist for subtle neurological symptoms and signs, and neuroimaging is performed to detect any evidence of CNS involvement. An established method of IOL treatment is needed. Moreover, these patients require long-term follow-up to rule out disease recurrence or adverse effects of radiotherapy or intraocular chemotherapy.

Survival of primary intraocular lymphoma (IOL) patients, including those with primary IOL alone or that simultaneously detected with primary central nervous system lymphoma (PCNSL). Patients with primary IOL that were subsequently diagnosed with PCNSL had a median progression-free survival (PFS) of 25.4 months (95% CI, 18.0-48.3 mo) and a 3-year overall survival (OS) rate of 90%.

Survival of patients with primary central nervous system lymphoma (PCNSL) that were subsequently diagnosed with intraocular lymphoma (IOL) had a median progression-free survival (PFS) of 12.5 months (95% CI, 6.0-19.0 mo) and a 3-year overall survival (OS) rate of 53.3%. 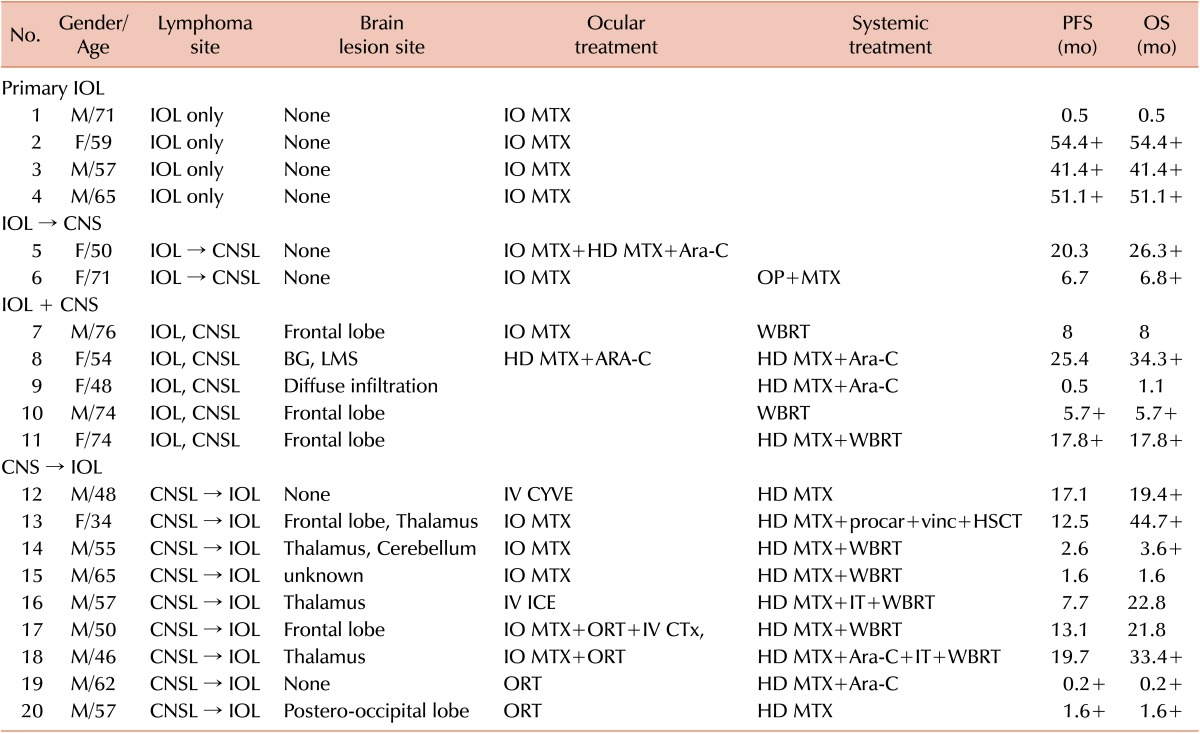