TO THE EDITOR: kinase domain mutations confer resistance to imatinib in chronic myeloid leukemia (CML) patients. Ponatinib is the only tyrosine kinase inhibitor (TKI) able to eradicate leukemic cells harboring the T315I mutation, which replaces a threonine with isoleucine within the ATP binding site of the tyrosine kinase protein [1]. However, the drug is currently only approved for adult CML patients, with limited reports of its use in children and adolescents. Here, we report on the efficacy of ponatinib before and after allogeneic hematopoietic stem cell transplantation (HSCT) in an adolescent patient with blast phase chronic myeloid leukemia (CML) who relapsed with the T315I mutation.

A 16-year-old male patient was diagnosed with B lymphoid blast phase (BP) CML, and received initial treatment with prednisolone combined with imatinib at 600 mg/day for 4 weeks. A follow-up bone marrow (BM) study showed complete hematologic response (CHR) with major cytogenetic response. While maintaining imatinib with the aim of undergoing allogeneic HSCT, the patient relapsed to accelerated phase (AP) 4 months after achieving initial CHR. Complete blood count at the time of AP relapse showed a white blood cell count of 11.77×109/L (8% blasts), hemoglobin 8.6 g/dL and platelet count of 82×109/L, while the BM showed 18% blasts (Fig. 1). The patient progressed to B lymphoid BP again one month later. Molecular studies for kinase domain mutations done at the time of AP relapse showed the T315I mutation. As ponatinib, the only TKI with efficacy against CML cells with the T315I mutation, is not approved for children and adolescents, the patient received a 4-drug reinduction regimen consisting of vincristine, daunorubicin, asparaginase and dexamethasone, as well as intrathecal chemotherapy; this resulted in second CHR, although the transcript value, reported as the ratio of to measured by real-time quantitative reverse transcription-polymerase chain reaction (RQ-RT-PCR), remained high at 3.55×10-1 (Fig. 2). After discussion with the patient’s family concerning treatment options, the patient was subsequently started on ponatinib at the adult dose of 45 mg/day. After 1 month of ponatinib therapy, follow-up study for peripheral blood (PB) transcript value showed a rapid decrease to 1.92×10-4 (Fig. 2). 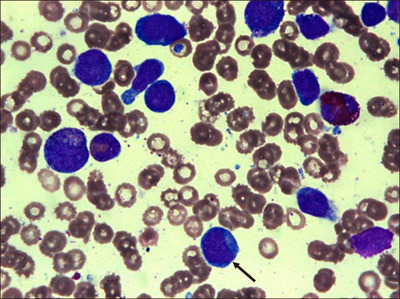 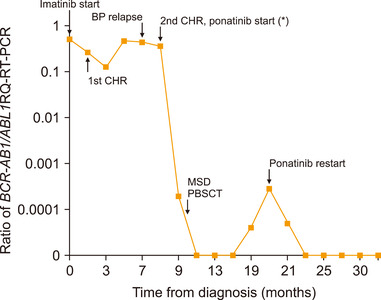 Figure 2. Changes in the ratio of RQ-RT-PCR value for the patient from diagnosis to last follow-up. All values were obtained from peripheral blood, except for (*) which was obtained from bone marrow.Abbreviations: BP, blast phase; CHR, complete hematologic response; MSD PBSCT, matched sibling donor peripheral blood stem cell transplantation.

The patient proceeded to matched sibling donor peripheral blood stem cell transplantation, with myeloablative conditioning consisting of busulfan and cyclophosphamide. The immediate post-transplant course was complicated by veno-occlusive disease and hemorrhagic cystitis. Although the patient continued to show a PB RQ-RT-PCR value of 0 after HSCT, a surveillance study obtained 9 months after transplant showed an increased value of 4×10-5. The patient was restarted on ponatinib at the previous dose of 45 mg/day, resulting in conversion to molecularly undetectable status again 2 months later. Six months after restarting ponatinib, the dose was decreased to 15 mg/day as the transcript value remained 0. Major toxicities observed after reinitiating ponatinib post-HSCT included skin complications, such as facial rash and pustules, and peripheral limb erythema (both grade 1 according National Cancer Institute Common Terminology Criteria for Adverse Events, version 4.0) which resolved after a decrease in the ponatinib dose. The patient has so far maintained ponatinib continuously for 20 months since restarting the TKI, with no further increase in the RQ-RT-PCR value in serial assessments.

Several studies have reported on the use of ponatinib in pediatric Philadelphia chromosome-positive (Ph+) leukemias [2-7], including 22 patients in total with CML [2, 5-7]. Six of these CML patients had the T315I mutation and ponatinib therapy resulted in decreased leukemic burden in 4 patients (Table 1) [2, 6, 7]. Our case study adds to the literature on T315I mutation (+) pediatric CML patients who showed a rapid and favorable response to ponatinib therapy.

Summary of pediatric CML patients with the T315I mutation treated with ponatinib.

Although ponatinib is effective in CML patients resistant to first-line TKI therapy, the drug also has the potential for serious side effects. A phase 2 study of ponatinib in adult patients with Ph+ leukemias with long-term follow-up reported that the most common adverse events in chronic phase CML patients were rash, abdominal pain and thrombocytopenia, while serious adverse events included pancreatitis, atrial fibrillation, pneumonia and angina pectoris [8]. The majority of these side effects occurred within 3 months of starting ponatinib [9]. Perhaps the most distinct complication of ponatinib therapy is arterial occlusive events (AOEs), and the landmark phase 2 study reported a 25% cumulative incidence of AOEs at 5 years, with a median time to onset of 13.4 months [8]. The risk for AOEs is likely related to the dose of ponatinib, underscoring the need to treat with the minimum effective dose [10]. Our patient showed skin complications, including facial rash and peripheral limb erythema, on restarting ponatinib after post-HSCT molecular relapse. We subsequently decreased the ponatinib dose once the transcript reverted to undetectable status, and he has since remained free of possible drug-related side effects. The range and severity of ponatinib-related adverse events may differ in children compared with adults, and currently ongoing clinical trials of ponatinib therapy in the pediatric setting may conclude upon the appropriate dose, safety and efficacy of this drug.

The optimum duration of prophylactic TKI therapy for CML patients post-allogeneic HSCT remains unclear. One recent study on adult patients with Ph+ leukemias reported a median duration of post-HSCT TKI therapy of 16 months [11]. Specifically regarding ponatinib, one study on an adult patient with T315I mutation (+) BP CML described prophylactic therapy for more than 1 year after HSCT [12]. Studies on the duration of TKI therapy necessary for patients who show molecular relapse post-HSCT are also few. One adult study showed that 4 out of 10 CML patients continued to show complete molecular response after stopping imatinib therapy initiated for molecular or cytogenetic relapse after HSCT; the median duration of TKI therapy was 269 days in the 4 patients [13]. Maintaining deep molecular remission for at least 2 years was a criterion used in studies on imatinib cessation in both adult and pediatric CML patients [14,15]. A similar prerequisite may be considered for stopping TKI therapy administered for post-HSCT relapse, although patients who have received allogeneic HSCT, unlike transplant-naïve patients treated with TKI only, may be aided by the immunologic effects of the graft.

In summary, our case study adds to the limited literature on children and adolescents with T315I mutation (+) CML treated with ponatinib. The TKI was able to significantly decrease the transcript load within a short time span in a BP patient in second CHR prior to transplant, and also induced and maintained remission for molecular relapse post-transplant. Further studies on the optimum dose of the TKI for children and adolescents may allow for safer treatment with this drug in rare Ph+ pediatric leukemias.