TO THE EDITOR: Emergence of a V617F-positive myeloproliferative neoplasm (MPN) while in remission from acute myeloid leukemia (AML) is an exceedingly rare phenomenon with the MPN presenting as polycythemia vera (PV), essential thrombocythemia or MPN unclassifiable [1-3]. Of these infrequently reported cases, retrospective analysis of AML diagnostic material has shown that the V617F is sporadically present at this time demonstrating that this mutation can manifest phenotypically before or after AML presentation. Here we describe the clinical course of a patient in remission from AML in whom PV emerged eighteen years after initial diagnosis following fifteen years of disease free survival. We review those few similarly presenting cases from the V617F era in order to identify any salient features.

A 64-year-old female with a long standing history of systemic lupus erythematosus presented in 2002 with lethargy, tiredness and a cough. Full blood count showed anemia (Hb, 11.6 g/dL), neutropenia (0.2×109/L) and a normal platelet count (243×109/L). Bone marrow aspirate was predominantly infiltrated with Sudan Black-positive myeloblasts consistent with AML FAB type M1. The karyotype was normal with no evidence of splenomegaly identified. A recovery thrombocytosis of 903×109/L was noted after three courses of cytarabine and daunorubicin but was felt to be reactive and resolved. Review of archival bone marrow aspirates showed no morphological evidence of an MPN at this time. The patient relapsed in 2004 with 25% CD13/CD33/CD117+ myeloblasts in the bone marrow aspirate, normal spleen size and a normal karyotype. The patient was subsequently treated with two courses of FLAG-Ida (fludarabine, cytarabine, G-CSF, idarubicin) achieving complete remission with no rebound thrombocytosis. Blood counts were stable for more than a twelve years until 2017 when a slowly rising Hb and HCT accompanied by a microcytosis were noted and sustained until the present (peak Hb, 16.8 g/dL; peak HCT, 0.517; nadir MCV, 68.1 fL) (Fig. 1). 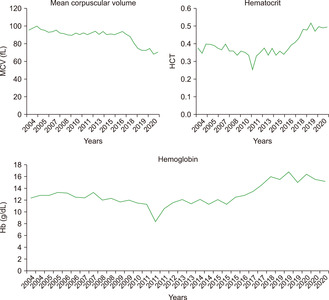 Figure 1. Red blood cell indices of the patients throughout the clinical course.

The first case reported of PV developing from a background of AML was described in the pre- V617F era [4]. A literature search reveals three previous cases of V617F-positive PV developing while in long-term remission from AML with clinical features summarised in Table 1 [1, 5, 6]. All three patients had been previously treated intensively for AML with a maximum period of seven years to the development of PV. The case described herein is therefore noteworthy in the latency of eighteen years between AML diagnosis and documentation of V617F-positive disease that required clinical intervention. The phenotypic manifestation of the V617F, evidenced as the synchronous elevation in Hb and HCT and developing microcytosis is conspicuous, however it remains challenging to pinpoint when the mutation was acquired in the patients’ hematopoietic stem cells. Population studies have proposed a low rate of increasing V617F allele burden over many years though this expansion has also been shown to be highly variable in manifesting as an overt MPN [7, 8]. Intrinsically associated with the development of PV is the presence of the V617F as a marker of clonal hematopoiesis in hematologically normal elderly individuals [9]. A common feature of these four patients is the age at which PV becomes apparent with a range of 64–82 years (Table 1). It may be speculated that intensive induction chemotherapy for AML and other hematological malignancies such as acute undifferentiated leukemia, acute lymphoblastic leukemia and diffuse large B-cell lymphoma [10-12] that result in ablation of the bone marrow microenvironment culminates in a niche compatible for pre-existing V617F-positive stem cells with clonal potential to inhabit and expand resulting as apparent PV.

Features of four cases of polycythemia vera emerging while in long-term remission from acute myeloid leukemia.

While pre-clinical models of PV are valuable, standardized tools for dissecting the molecular mechanisms of the disease [13], unusual cases such as that described herein further emphasize the underlying clonal complexity of the development of V617F-positve MPN.