TO THE EDITOR: Viral infections cause coagulopathy by activating the coagulation cascade. Coagulopathy can result in thrombotic or hemorrhagic complications and plays a central role in determining prognosis [1]. Platelet numbers and functions are also affected during viral infections through various mechanisms. Viruses have been shown to induce thrombocytopenia by affecting platelet production and through peripheral destruction of platelets via specific glycoprotein antibodies [2].

Twenty-four patients presented to the CBNUH with confirmed SARS-CoV-2 infection. The median time interval from COVID-19 diagnosis to admission was 3.0 (0–18) days. All patients tested positive for SARS-CoV-2 by real-time RT-PCR. The median age of the cohorts was 55.5 (25–90 yr), and 38% (N=9) were men. A total of 185 nasal and pharyngeal swabs and/or sputum samples were collected during the infection. There were 85 SARS-CoV-2-positive samples, 61 inconclusive, and 39 negative samples. The clinical characteristics and laboratory findings are summarized in Table 1. Of the 24 patients, 20 had no underlying disease, three had hypertension and diabetes; among these three patients, one also had chronic renal failure. The other patient had only diabetes. The coagulation test of the patients diagnosed with diabetes was initially within the normal range, and there were no definitive findings of thrombosis during hospitalization. The median white blood cells count, absolute neutrophil count, and absolute lymphocyte count, taken on admission day, were 4.3 (2.2–7.4)×103/µL, 2.50 (1.11–5.87)×103/µL, and 1.15 (0.49–1.82)×103/µL, respectively. The median hemoglobin level was 13.1 (10.1–16.1) g/dL, and the platelet count was 206 (107–554)×103/µL. A decrease in absolute lymphocyte number was observed during the period of infection in which real-time RT-PCR tests were positive, and lymphopenia (less than 1.00×103/µL) occurred in 10 (41.7%) patients. Neutrophilia (>7.50×103/µL) was not observed. Mild thrombocytopenia (less than 150×103/µL) was observed during the real-time RT-PCR-positive period in six (25%) patients, and thrombocytosis (>400×103/µL) was observed during the real-time RT-PCR-inconclusive period of infection in four (16.7%) patients.

Clinical characteristics and laboratory findings in 24 patients diagnosed with COVID-19. 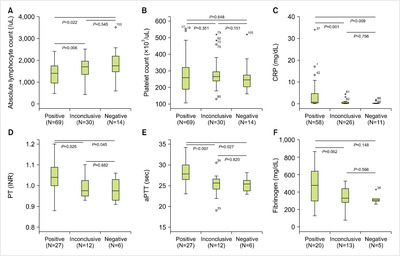 The COVID-19 pandemic could overwhelm the public healthcare systems. Therefore, laboratory markers to predict disease severity and prognosis are needed to prepare for prolonged periods of sustained infections. Data on previous viral infections showed that coagulation-related parameters and inflammatory markers strongly correlate with the patient’s prognosis.

SARS-CoV-2 has clinical symptoms similar to SARS-CoV-1 and belongs to the same subgenus Sarbecovirus [5]. The immune response to these viral infections is regarded as a general reaction. The pathogenesis of the viruses may differ, but the clinical course and laboratory findings are expected to be similar [6]. In previous SARS-CoV-1 infections, thrombocytopenia has been commonly observed in patients with severe disease [7]. In the case of the Middle East respiratory syndrome (MERS), anemia, lymphopenia, and thrombocytopenia are common, but severe thrombocytopenia is rare [8, 9]. Disseminated intravascular coagulation is a major cause of death in both SARS-CoV-1 and MERS infections. In our study, thrombocytopenia and lymphopenia were not commonly found. However, since our patients did not have a severe infection, these conditions may differ depending on the disease severity. Further analyses are required in this regard.

Our data show that negative molecular seroconversion takes longer in SARS-CoV-2 infection (median duration of 30 days), and this finding is in line with a previous report [10]. SARS-CoV-2 RNA persists longer than SARS-CoV-1, which seroconverts back to negative after 10–15 days of symptom onset [11]. These viral clearance times are important for the establishment of public policies aimed at controlling COVID-19 dissemination. During the real-time RT-PCR-inconclusive infection period, patients were asymptomatic, and we were uncertain as to whether patient isolation should continue. However, hypercoagulability mostly occurred during this phase. In addition, during the real-time RT-PCR-inconclusive phase, test results were discrepant depending on the type of specimen or laboratory method employed [12]. Therefore, patient discharge should be done cautiously.

This study has a few limitations. The small sample size may not truly reflect viral infection characteristics in every patient infected with SARS-CoV-2. However, given that the clinical data on hematological abnormalities in patients with SARS-CoV-2 infection were limited, the results of this study add new information regarding COVID-19. Furthermore, the current study differs from other studies in that it describes coagulopathy-related laboratory results relative to the viral burden. A second limitation is that this study did not include patients with severe COVID-19. This is due to the low mortality rate in South Korea, despite the occurrence of several large clusters [13].

In conclusion, we have shown coagulopathy-related laboratory findings in patients with non-severe COVID-19. The coagulopathy-related laboratory findings indicate that the coagulation profile should be used to monitor patients until negative conversion for SARS-CoV-2 occurs. However, the study’s limitations highlight the need for further research focusing specifically on disease severity.