Here, we report about a 35-month-old Korean boy with severe hemophilia A and high inhibitor titer treated with emicizumab for over 1 year. He was treated with BPAs at 6 months of age and then with emicizumab from 23 months onward. We compared the patient’s hemorrhagic episodes following conventional therapy for the past 1 year (BPAs) with episodes during 1 year of emicizumab prophylaxis. We also compared medical costs during these two treatment periods. This study was approved by the Institutional Review Board of Keimyung University Dongsan Hospital (approval No. 2019-09-063) and was conducted according to the tenets of the Declaration of Helsinki. Informed consent was obtained from the patient’s parents before the study.

To prevent intracranial hemorrhage, the patient was born via an induced labor delivery since his mother’s pelvic inlet diameter was larger than his head. His baseline FVIII was 0.1%, and bleeding events were managed with on-demand injections of recombinant FVIII concentrate. His sibling also has severe hemophilia A (baseline factor VIII 0.4%) but without inhibitors and was initially treated with recombinant FVIII concentrate. His mother is a hemophilia A carrier (baseline factor VIII 26%).

At 6 months of age, the patient’s inhibitor titer was 6.0 BU/mL, which increased to 160 BU/mL within a month after treatment with on-demand BPA. At 14 months of age, a central venous catheter (chemoport) was implanted into the patient, and ITI was scheduled to eliminate the inhibitor. However, ITI was delayed owing to severe melena that persisted for over 6 weeks. During an emergency room visit for sudden melena and pale appearance, laboratory test results revealed severe anemia (hemoglobin 30 g/L) and azotemia (BUN/Cr 31/0.33 mg/dL). He was treated with red blood cell (RBC) transfusion and BPA, but melena persisted; however, no bleeding focus was found on abdominal computed tomography, angiography, endoscopy, colonoscopy, and Meckel scan. An RBC nuclear scan revealed uneven tracer accumulation around the ileum, consistent with a bleeding focus. Since melena persisted regardless of infusion with rFVIIa and aPCC, sequential combined bypassing therapy was intensified (rFVIIa 120 mcg/kg/dose q 3 h and aPCC 70 IU/kg q 12 h) [10], and additional tranexamic acid (10 mg/kg q 6 h) was added. His melena subsided 7 weeks after hospitalization, although frequent bleeding, including hematomas and intravenous site hemorrhages, did not cease.

Because of severe bleeding tendency, we opted to treat the patient with emicizumab at its pre-launch stage in Korea. At 23 months of age, the induction dose of 3 mg/kg emicizumab was injected subcutaneously q 1 week for 4 weeks. A weekly maintenance dose of emicizumab (1.5 mg/kg) was continued for 10 weeks followed by 3 mg/kg emicizumab q 2 weeks. The medical team trained his mother on the subcutaneous administration of emicizumab. From the fifth dose (the first maintenance dose), the patient’ mother administered emicizumab. This child is now 35 months old and has received emicizumab prophylaxis for 1 year.

Before starting emicizumab prophylaxis, the patient required six hospital admissions and 40 visits to an outpatient clinic for hemorrhagic episodes. He had severe melena and several hematomas at his chemoport site, intravenous sites, and ankle. BPAs were injected directly into his chemoport, which was traumatic for the patient. In the case of a hematoma or infection at the chemoport site, the patient was re-admitted and received repetitive intravenous access through peripheral veins. During 1 year of emicizumab prophylaxis, the patient experienced only one episode of bruising at an injection site, which resolved spontaneously, requiring no further treatment. The patient had no thromboembolic complication or other adverse events during the study period. 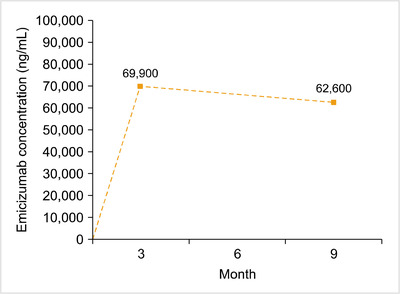 Figure 1. Concentration of emicizumab during prophylaxis in a Korean pediatric patient with severe hemophilia A and high titer inhibitor. 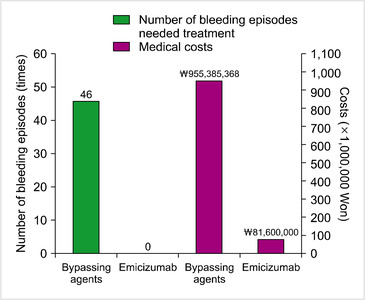 Figure 2. A comparison of the number of bleeding episodes that needed treatment and of the medical costs between the previous 1 year (conventional therapy using bypassing agents) and the present 1 year (emicizumab prophylaxis) in a Korean pediatric patient with severe hemophilia A and high titer inhibitor.

In conclusion, prophylactic subcutaneous emicizumab injection every 1–2 weeks was effective and safe for treating the Korean boy with severe hemophilia A and a high titer inhibitor. Emicizumab dramatically reduced bleeding episodes, the use of BPA, and overall medical burden. The patient had a history of complications, including severe melena, chemoport site hematoma, and large hematomas at other body sites during conventional treatment; conversely, this patient had no bleeding episodes requiring BPAs during emicizumab prophylaxis. Additionally, an invasive procedure such as chemoport removal operation was possible for the patient during emicizumab prophylaxis, without any adverse events. Emicizumab treatment resulted in improved quality of life and convenience for the patient and his parents.