TO THE EDITOR: Coronavirus disease 2019 (COVID-19) has had a massive impact globally. COVID-19 was declared a pandemic on March 11, 2020, by the World Health Organization [1]. The mortality rate seems to be significantly higher in elderly patients, especially those hospitalized with comorbidities, such as hypertension, diabetes, obesity, and coronary artery diseases [2]. Because viral diseases may have atypical presentations, especially in patients with cancer, the course of the disease in this population is unknown [3, 4]. The incidence of severe events, including intensive care unit admission, the need for mechanical ventilation, and death after virus contraction, is 39% and 8% in patients with and without cancer, respectively [4]. Limited data are available on COVID-19 outcomes in patients with hematologic diseases. Individuals who have lymphoma or chronic lymphocytic leukemia (CLL) are at an increased risk of serious illness, especially when on chemotherapy or having received it in the last 3–12 months, as are those who received immunotherapy or other targeted therapy that could affect the immune system [5, 6]. Here, we describe the medical course and management of a 68-year-old patient with refractory CLL/small lymphocytic lymphoma (CLL/SLL) undergoing treatment with ibrutinib, who presented to the emergency room with fever and fatigue and tested positive for severe acute respiratory syndrome coronavirus 2 (SARS-CoV-2). The patient had a favorable COVID-19 outcome; however, he became resistant to ibrutinib. Although ibrutinib, and possibly other Bruton’s tyrosine kinase (BTK) inhibitors, may provide protection against lung injury in hypoxic patients with COVID-19, future research on the effects of BTK inhibitors and changes in the biological behavior of the tumor in patients with indolent B-cell lymphoid malignancy who have been exposed to COVID-19 infection is important.

This report describes the case of a 68-year-old man with systemic arterial hypertension and hypothyroidism, who had been diagnosed with CLL/SLL (Rai Stage IV/Binet C) in 2016. The patient showed disease progression for 4 years from the time of diagnosis, for which he received multiple lines of chemotherapy/immunotherapy (chlorambucil/prednisone; rituximab/cyclophosphamide/vincristine/prednisone; gemcitabine/oxaliplatin; and prolonged use of corticosteroid and cyclophosphamide). However, in late 2019, his condition again showed signs of progression; particularly, he had significant pancytopenia and was dependent on transfusion of packed red blood cells (PRBC) approximately two times a week. Additionally, he was administered deferasirox, an iron chelator, because of marked iron overload. He was also investigated for possible autoimmune hemolytic anemia or immune thrombocytopenia secondary to CLL, but the tests were negative. Systemic chemotherapy was continued till December 2019, which caused toxicity and only a small benefit to the patient. On February 4, 2020, the patient was started on ibrutinib (280 mg/day). After 1 week, the dose was increased to 420 mg/day. A favorable evolution occurred after introducing ibrutinib, with a drastic reduction in blood transfusion and an improvement in neutropenia and thrombocytopenia. On April 6, the patient presented to the hospital with complaints of fever, which subsided with ibuprofen, productive cough, fatigue, and lethargy accompanied by mild dyspnea, which started 2 days ago. Physical exam revealed a temperature of 37.2°C, respiratory rate of 26 breaths/minute, heart rate of 88 beats/minute, and a good oxygen saturation (SpO2) of 98% on room air. The most relevant laboratory findings were as follows: hemoglobin level, 7.1 g/L; white blood cell (WBC) count, 3.35×109 cell/L; lymphocyte percentage, 56%; platelet count, 41×109 cells/L; high-sensitive C-reactive protein level, 137.3 mg/L; elevated procalcitonin level, 17.60 ng/mL; and D-dimer level, 1.18 µg/mL. Chest computed tomography (CT) showed changes compatible with a nonspecific inflammatory/infectious process (Fig. 1). A diagnosis of bacterial community-acquired pneumonia was established, and the patient was discharged with a prescription of clavulanate potassium and azithromycin for 7 days. After 12 h, the patient returned to the emergency room with hypotension and a decreased level of consciousness. During initial evaluation, he was eupneic in room air, with pallor+++/4. Pulmonary auscultation revealed right basal crackles. The laboratory tests showed worsening of the three-blood series (hemoglobin level, 5.8 g/L; WBC count, 1.28×109 cells/L; neutrophil percentage, 4%; lymphocyte percentage, 70%; platelet count, 18×109 cells/L), which indicated requirement of PRBC and platelets concentrate transfusion. With the evolution of the infectious condition and clinical worsening, we stopped ibrutinib therapy. Treatment was started with intravenous hydration, cefepime, clarithromycin, and filgrastim with a good response. The attending physician suspected COVID-19, and a SARS-CoV-2 reverse transcription polymerase chain reaction (RT-PCR) test using nasal swab confirmed positive diagnosis. Thereafter, he was transferred to the isolation ward for management. Clinical and laboratory improvement of neutropenic symptoms was observed, but on April 9, he presented hallucinations and disorganized speech, without loss of attention or psychomotor agitation. This condition improved after replacement of cefepime by piperacillin-tazobactam. We opted to continue the investigation with cranial CT scan, which showed no changes. On April 11, because of the maintenance of fever associated with immunosuppression, piperacillin-tazobactam was replaced by meropenem and vancomycin. During the first 7 days of inpatient admission, he presented recurrent fever, worsening asthenia, myalgia, and cough, while maintaining adequate oxygen saturation and no need for ventilatory support. A follow-up chest CT on April 14 showed a small pleural effusion on the right and moderate on the left and restrictive atelectasis with volumetric reduction of the left lower lobe (Fig. 1). The patient underwent thoracentesis, and the results of pleural fluid analysis were compatible with a transudate. On April 18, he presented changes in the consistency and frequency of stools, which were softer and more frequent, but these changes resolved spontaneously after 2 days. On April 20, at the end of antibiotic treatment, the patient was discharged from the hospital. He was afebrile in the last 48 h and showed improvement in symptoms. On April 26, the patient returned to the emergency room reporting severe asthenia, dyspnea on minimal efforts, such as walking on the plane and fever. Laboratory tests showed severe anemia (hemoglobin level, 6.0 g/L; WBC count, 9.85×109 cells/L; neutrophil percentage, 60%; lymphocyte percentage, 18%; platelet count, 52×109 cells/L). He was hospitalized and received transfusion of PRBC, methylprednisolone 40 mg IV per day, and antibiotics. After 2 days, remission of symptoms was observed, and the patient was discharged. Thereafter, he did not develop respiratory distress or severe hypoxemia. Ibrutinib was resumed on April 30, but with no satisfactory response. The patient returned to receiving blood transfusions approximately twice a week. In June, a new bone marrow biopsy was performed, which showed 95% infiltration by lymphoid cells with small to intermediate elements, diffuse and interstitial pattern distribution, with mild to moderate reticulin myelofibrosis (MF -1/2). Residual hematopoietic elements of erythroid, myeloid, and megakaryocytic series reduced in number, with reactive changes. The presence of 17p mutation was investigated by fluorescence in situ hybridization (FISH) and was negative. We chose to associate rituximab with ibrutinib to improve the therapeutic response. However, on June 21, the patient returned to the hospital with a reduced level of consciousness, severe anemia (hemoglobin, 3.2 g/L), and a significant drop in oxygen saturation, resulting in death on June 22.

Figure 1. Computed tomography scan of the chest on the day of admission and 8 days later. Thick-ness of the interlobular septa in the pulmonary bases is non-specific and is associated with few centrilo--bular nodules, compatible with a nonspecific in-flammatory/infectious process (A). Small amount of fluid in the right pleural cavity and moderate amount on the left as well as restrictive atelectasis with volumetric reduction of the left lower lobe is seen (B).

The optimal management of CLL/SLL in the setting of COVID-19 is a subject of ongoing discussions. Patients with cancer are more susceptible to infection than the general population because of their systemic immuno-suppressive state caused by either the malignancy or anticancer treatments. Moreover, patients with cancer frequently go to the hospital for treatment and monitoring and, therefore, may be at risk of contracting COVID-19, particularly those older than 60 years [6, 7]. Here, we discuss the clinical outcomes in a patient with refractory CLL/SLL under ibrutinib therapy following SARS-CoV-2 infection. His clinical course and treatment are summarized in Figs. 2, 3. The patient had been taking ibrutinib for approximately 63 days before being infected by the coronavirus, but previously, he had been receiving systemic chemotherapy. Although he was a fragile patient with increased risk factors for severe COVID-19, such as hypertension, age, prolonged pancytopenia, multiple blood transfusions with iron overload, multiple cycles of systemic chemotherapy, and prolonged use of corticosteroids, he did not develop a severe respiratory condition and never required admission to an intensive care unit during SARS CoV-2 infection. Interestingly, after viral infection, when ibrutinib was resumed, the patient became refractory to the drug, returning to the pretreatment condition. Ibrutinib is a potent covalent inhibitor of BTK, a key component of B-cell signaling that plays an important role in B-cell development, survival, and function [7]. Severe and moderate COVID-19 shows elevated plasma levels of inflammatory cytokines and chemoattractants, such as IL-2, IL-6, IL-7, IL-10, granulocyte colony-stimulating factor, IP-10/CXCL-10, MCP-1/CCL2, MIP-1a/CCL3, and TNF-a [8]. Buggy and Elias [9] recently published a paper showing that ibrutinib may protect against pulmonary injury in COVID-19 patients. The potential for ibrutinib to abrogate lung injury and death has been demonstrated in an experimental model, wherein mice challenged with a lethal intranasal inoculum of a mouse-adapted strain of H1N1 influenza virus were protected against lung injury. Control mice developed respiratory failure, and their histological and CT findings were consistent with those of lung injury, in sharp contrast to the mice that received ibrutinib. Notably, mice treated with ibrutinib also showed decreased inflammatory cell infiltration and proinflammatory cytokines in the lung tissues, which included proinflammatory and chemoattractant cytokines [10]. In human neutrophils, BTK mediates signaling via toll-like receptor-4 (TRL4). Previous experiments indicate that BTK plays a substantial role in regulating innate inflammation in the respiratory tract during acute lung injury, and this damaging inflammation is largely neutrophil-driven [11, 12]. Use of ibrutinib, regardless of having been suspended during the acute phase of infection, may have protected this patient from a severe inflammatory process that could lead to a dramatic condition of respiratory failure. What we are unable to explain is the refractoriness acquired to the drug after the viral infection, since initially, the patient had shown a fast and sustained response to ibrutinib. Current data suggest that patients with acquired resistance to ibrutinib have poor survival. Moreover, many patients do not have the opportunity to receive newly emerging highly effective therapies. CLL/SLL relapse on ibrutinib is primarily mediated through the acquisition of mutations in BTK or its immediate downstream target, PLCG2 [13]. Temporary dose interruption of ibrutinib for reasons unrelated to relapse, such as viral infection in this case, could lead to rapid disease progression and have an impact on overall survival and progression-free survival, which has been reported by several authors [14, 15]. According to Hampel . [16], the development of rapid progression after stopping ibrutinib was not associated with age, sex, FISH mutation status TP53, disruption, duration of Ibrutinib therapy, or reason for discontinuation on univariate analysis in over half (5/9) of the patients who experienced rapid progression of disease had <12 months of prior ibrutinib therapy [14, 16, 17]. These findings may explain the evolution of our patient. Future research is needed to determine whether patients with COVID-19 can exhibit changes in the biological behavior of the disease that can modify the response to specific drugs. Besides, CLL/SLL is a type of malignancy associated with impaired immune responses to common pathogens because of a profound immune dysregulation reflected by hypogammaglobulinemia, qualitative and quantitative B- and T-cell defects, including impaired response to vaccination and CD4+ lymphopenia, innate immune dysfunction, and neutropenia [16]. This could arguably compromise the capacity of patients with CLL/SLL to eliminate the virus, with a possible higher infection risk for this population [18]. In conclusion, given the potential importance of immunopathological complications in COVID-19, this group of patients should be carefully monitored during the ongoing COVID-19 pandemic and encouraged to continue self-isolating to limit exposure to viral infection. Moreover, the impact of anti-cancer treatment on COVID-19 should be assessed. 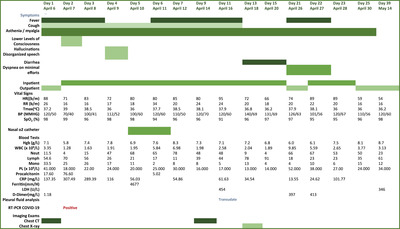