Abstract
Background
The aim of this study was to estimate the prevalence of the beta thalassemia trait (BTT) and differentiate it from iron-deficiency anemia (IDA) among blood donors.
Methods
A total of 1,000 samples from blood donors were subjected to complete hemogram with red blood cell indices. Further, Mentzer index (MI) was calculated for samples with mean corpuscular volume (MCV) below 80 fL and mean corpuscular hemoglobin (MCH) below 27 pg. Samples with Mentzer index ＜12 were subjected to naked-eye single-tube red cell osmotic fragility test (NESTROFT) followed by hemoglobin electrophoresis in positive cases. Serum ferritin was assessed in NESTROFT-negative cases.
Results
The prevalence of BTT among blood donors was 3.7% and that of microcytosis among donors was 8.6%. The prevalence of BTT among microcytic donors was 41.8% while that among those with IDA was 11.6%. A value of MI ＜13 was highly sensitive in the diagnosis of BTT. MI ＞13 was found to have both high specificity and high sensitivity for diagnosing IDA.
Conclusion
A moderately high prevalence of BTT was observed among blood donors. Presently, no screening program is mandatory for screening of BTT among blood donors. Indices like MCV, MCH, and Mentzer Index were thus found to be effective to screen for BTT and IDA among blood donors, and NESTROFT was a cost-effective mass screening method to differentiate BTT and IDA.
Keywords: Beta thalassemia trait, Blood donors, Mentzer index, NESTROFT, Iron deficiency anemia

Thalassemias are a group of anemias resulting from genetic defects in the production of one or more of globin polypeptide chains of hemoglobin. These disorders lead to disruption in the production of alpha- or beta-globin polypeptide chains. Imbalance in the globin chain ratio and precipitation of unpaired chains lead to ineffective erythropoiesis and hemolytic anemia [1].

Thalassemias are inherited in an autosomal recessive pattern. The prevalence of thalassemias is particularly high in the Mediterranean region, the Indian subcontinent, Southeast Asia, and West Africa [2]. Clinically, alpha and beta thalassemia may occur in varied genetic forms. Beta thalassemia trait (BTT) is the carrier state of beta thalassemia major, a disease that has grave economic implications for a developing country like India.

The present study aimed to determine the prevalence of BTT among blood donors and also to differentiate it from iron-deficiency anemia (IDA) in the healthy blood donor population using simple screening tools such as the Mentzer index (MI) and naked-eye single-tube red cell osmotic fragility test (NESTROFT).

This was a prospective observational study conducted at the Department of Transfusion Medicine, in collaboration with the Department of Pathology, over a period of one-and- half years. The study was approved by the Institutional Ethics Committee of the institution, and written informed consent was obtained from the donors. A total of 1,000 samples of both voluntary and replacement blood donors was studied to determine the prevalence of BTT. Donors deferred due to low hemoglobin level (Hb<12.5 g/dL) were also included in the study.

The inclusion criteria were voluntary and replacement blood donors aged 18–40 years weighing more than 45 kg and willing to participate in the study. Only first-time donors and those with a last donation more than two years prior to the study, but with a hemoglobin level above 12.5 gm/dL, were enrolled. First-time donors deferred due to low hemoglobin levels (below 12.5 gm/dL) were also included. Regular blood donors and donors deferred due to other reasons except low hemoglobin were excluded from the study. Blood samples of all donors eligible for the study were taken after donation of blood; blood samples of deferred donors were also taken. EDTA was used for obtaining a complete hemogram. Samples were analyzed using an automated cell counter within 24 hours of donation or sample collection.

Mean corpuscular volume (MCV) less than 80 fL was considered as microcytosis. MI was calculated by dividing the MCV by the red blood cell count for all the samples having MCV <80 fL and MCH <27 pg. The MI of each such sample was recorded, analyzed, and grouped under the following categories: MI >14, suggestive of IDA; MI 12–14, intermediate; MI <12, suggestive of BTT.

Samples having MI <12 and those with intermediate MI (range, 12–14) were subjected to NESTROFT [9]. Briefly, 2 mL of 0.36% buffered saline was taken in a test tube, and 2 mL of distilled water was taken in another test tube. After addition of 20 mL of anticoagulated whole blood in each tube, both tubes were mixed well and left undisturbed for half an hour at room temperature. Subsequently, the contents were shaken and the tubes were held against a white paper on which a thin black line was drawn and observations were made regarding the visibility of the black line (yes or no). The tubes were then left undisturbed a further few hours and the contents again checked for hemolysis. The results were interpreted as NESTROFT positive or NESTROFT negative.

NESTROFT negative: Cases in which the black line was clearly visible through the contents of the tube after 30 minutes of incubation at room temperature were considered negative. After prolonged incubation at room temperature, the presence of cell lysis in the form of uniformly pink distilled water, with no sedimentation of red cells at the bottom of the tube, was observed.

Serum ferritin was assessed using enzyme-linked immunosorbent assay (ELISA; Orgentec Diagnostica GmbH) in cases where MI >14 and where there was indeterminate MI (range, 12–14) as well as in all NESTROFT-negative cases. This was also assessed in those with RBC indices highly suggestive of BTT and were NESTROFT positive, but had no band in the A2 region on hemoglobin electrophoresis. This was done to rule out the concomitant presence of IDA. 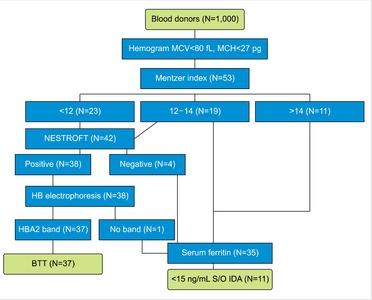 Figure 1. Flow chart for defining of BTT and IDA and the number of cases in the study. Samples with normal serum ferritin and distinct HbA2 band on electrophoresis were defined as having BTT. Samples with serum ferritin below 15 ng/mL were defined as having IDA [10]. Abbreviations: BTT, beta thalassemia trait; IDA, iron-deficiency anemia; MCH, mean corpuscular hemoglobin; MCV, mean corpuscular volume.

SPSS (SPSS Inc., Chicago, IL, USA) for Windows version 17.0 was used for data analysis. Prevalence rates were calculated and compared according to the type of donor, age group, gender, place of residence, religion, and presence or absence of family history of consanguinity and family history of thalassemia. Continuous data were analyzed in the form of mean and standard deviation. Differences were evaluated using the Chi-square test and Student’s t-test. A -value of <0.05 was considered statistically significant.

Prevalence of BTT among blood donors.

Prevalence and type of anemia among microcytic blood donors.

Association of different MI values with type of anemia.

Comparison of hematological parameters in donors with BTT and non-BTT.

Comparison of hematological parameters in donors with BTT and IDA.

NESTROFT was found to be applicable in 42 cases, out of which 38 were positive and 4 were negative. One case, out of 38 NESTROFT-positive cases, was found to be negative on Hb electrophoresis. Only positive predictive value for NESTROFT could be derived which was 97.3%.

The overall prevalence of BTT in our donor population was 3.7%. Other studies from India have shown varied prevalence of BTT ranging from 1.53% to 9.59% [6, 11-16]. A study conducted in school children found the prevalence of BTT to be 4.05% [6]. Another study from the southern part of India conducted in pregnant females reported a prevalence of 8.5% [13]. India being a country with vast ethnic diversity could be the reason for the wide variation in prevalence. Moreover, target groups and methods employed for estimation of prevalence were also different in these studies.

In a study conducted on blood donors in Malaysia, the prevalence of BTT was reported to be 5% [17]. In another study conducted in Egyptian blood donors to differentiate between BTT and IDA, the prevalence of BTT was found to be 6% [18]. A literature report from Pakistan found 73 (14.5%) out of 503 subjects to be beta thalassemia carriers, using NESTROFT as differentiating index between BTT and IDA. This discrepancy in results could be due to the different study populations as the authors included only subjects with microcytosis [19].

We found a high prevalence of BTT in the age group of 25–30 years (5.4%) followed by 18–25 years (3.9%). Some studies have reported comparable prevalence across all age groups [12]. Our study population comprised 83.7% donors younger than 30 years of age; hence, prevalence in other age groups could not be ascertained. Although 7.23% of females were carriers of BTT compared to 3.38% males, we do not generalize these figures to the whole population due to small number of female donors in our study.

A highly significant difference was found in prevalence among deferred donors (37.2%) in comparison to accepted donors (1.6%). The mean hemoglobin level of donors with BTT was 12.3%, which justifies the observation of using the cutoff for accepting donation as 12.5 g/dL. Wide variation was present between frequencies of BTT according to the states of residence of the donor, but these were not found to be statistically significant (>0.05). State-wise prevalence for the state of Punjab (5.2%) which represented 36.5% of our study population was comparable with the study conducted by Kumar . (4.4%) and Mohanty . (3.96%) [16, 11]. A higher prevalence in Punjab has been reported by Chatterjee . (11.79%) [12]. They used Bayesian estimates in assessing the prevalence of BTT. Our results were similar to those of Kumar . [16] in terms of BTT prevalence in Haryana and Himachal Pradesh.

We found a significant association between a history of consanguinity and BTT, but other authors have reported different results. Our finding of a significant association between the two is likely to be a result of the concomitant presence of associated family history of thalassemia in one-third of the donors, owing to the history of consanguineous marriage in the family. Religion-wise prevalence did not show any significant difference, as reported in other studies [11, 12, 16].

High-performance liquid chromatography (HPLC) is used to screen patients for hemoglobin disorders. In a large prospective study from eastern part of India conducted over a period of 10 years, BTT was the most common hemoglobin abnormality (4.6%) [20]. Some authors have recommended a screening algorithm for blood donors that includes HPLC analysis of microcytic donors with plasma ferritin levels above 15 ng/mL [21]. However, we could not perform HPLC in our donor population.

Our study has a few limitations. According to our study methodology, we could not perform Hb electrophoresis in all the cases in which NESTROFT was done due to which performance characteristics of NESTROFT could not be evaluated and compared. Moreover, we could not estimate HbA2 levels by HPLC, and DNA profiling could not be done due to financial constraints and lack of infrastructure.

In conclusion, we found moderately high prevalence of BTT among the blood donor population, suggestive of an increased risk of beta thalassemia major incidence in the near future. Currently, no screening program is mandatory for screening of BTT among blood donors, and donor screening is only done for anemia using hemoglobin estimation in blood banks. Based on the findings of this study, screening of blood donors for BTT and differentiating it from IDA is proposed using indices like MCV, MCH, MI, and NESTROFT, which have the advantage of being cost-effective and, thus, an advantage for developing countries like India where BTT and IDA are prevalent. An algorithmic approach can be devised to identify blood donors with BTT and differentiate it from IDA so that the blood donor is appropriately guided for counseling or iron therapy, respectively.

The study was approved by the institutional research and ethics committee, and informed written consent was taken from all blood donors who participated in the study.