Primary Sjogren syndrome (pSS) is a chronic autoimmune systemic disease that mainly affects the exocrine glands, causing severe inflammation with accompanying destruction of the gland. It is also characterized by systemic symptoms and laboratory findings of polyclonal B-lymphocyte activation, hypergammaglobulinemia, and positive autoantibodies. Its pathophysiology is not yet fully understood; genetic factors seem to play a relatively minor role, while environmental ones, most likely infections, contribute to disease onset and progression by activation of the innate and adaptive immune systems. Although the role of B cells in the disease is better characterized, little is known about the involvement of T cells in pSS [1-3].

In September 2012, a 39-year-old woman was referred to our outpatient service because of unexplained lymphocytosis, mild anemia, and thrombocytopenia. Together with the lymphocytosis, the patient developed xerophthalmia and xerostomia with anti-nuclear, extractable nuclear antigen, and Ro-SSA antibody positivity. A diagnosis of pSS was made following salivary gland biopsy. Clinical evaluation showed slight dryness of the mouth and eyes with no alterations to the spleen, liver, and lymph nodes. The tests performed on September 22, 2012 were significant for 9.61×109/L leukocytes, 8.19×109/L lymphocytes, 106×109/L platelets, and 11.8 g/dL hemoglobin; normal liver and kidney function values were seen with a slight polyclonal rise in the immunoglobulin dosage. In addition, hepatitis markers (A, B, and C serology) and parasitological stool assays were negative.

Therefore, to investigate a possible lymphoproliferative disorder, bone marrow and imaging studies were carried out. Bone marrow biopsy showed an interstitial and often intra-sinusoidal infiltration by small-medium sized CD8+ T lymphocytes, which had partial CD5 expression. However, no other sites appeared to be involved since a total body CT examination showed no adenopathies or liver or spleen enlargement. 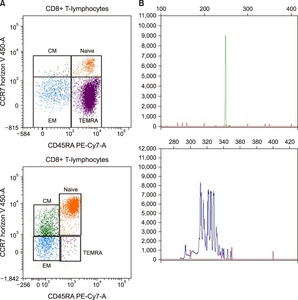 The bone marrow analysis revealed the presence of a very similar population, which accounted for 88% of all lymphocytes. Furthermore, they all appeared to present the αβ T-cell receptor (TCR-αβ), and polymerase-chain reaction analysis of the TCR genes confirmed a clonal rearrangement of TCR β, while the TCR δ gene showed a polyclonal rearrangement (Fig. 1B).

In November 2012, the patient started SS therapy with Hydroxychloroquine (Plaquenil) 200 mg once daily and prednisone 4 mg once daily, and in the following months, the number of lymphocytes returned closer to normal (6.65×109/L in February 2013) and the mild thrombocytopenia initially noted remained stable. Therefore, close monitoring, done with periodic testing and annual flow cytometric analysis of the peripheral blood, was done. The number of lymphocytes normalized within one year and has since remained constant (about 2×109/L lymphocytes), but CD8+ cells have continued to remain higher than normal, representing 80 to 89% of the total T lymphocyte population, and have also continued to represent an important proportion of the total number of lymphocytes (54% of all lymphocytes in 2015, 42% in 2016 and 2017, 52% and then 57% in 2018, and 61% in 2019; see Fig. 2 for a graphical representation). Moreover, throughout the years, CD57 continued to be expressed by about 50% of these cells. 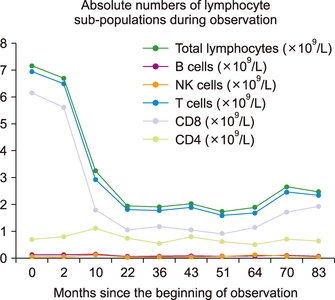 During the last visit in November 2019, a more in-depth analysis was performed, including CD27 and CD28 detection: naïve and central memory cells and over 70% of effector memory cells were found to express CD27 but not CD28, while 93.4% of TEMRA cells did not express either CD27 or CD28 (data not shown).

We would like to thank Dr. Linda Carli for her help in ensuring a correct follow-up of the patient.