Aplastic anemia (AA) is a hematological disorder that leads to significant mortality and morbidity. Clonal evolution in AA after immunosuppressive therapy (IST) is a major concern. Since Dameshek’s 1967 editorial in , titled “Riddle: what do aplastic anemia, paroxysmal nocturnal hemoglobinuria (PNH) and ‘hypoplastic leukemia’ have in common?,” to genomic data have increased our understanding of clonal evolution; however, our knowledge remains incomplete [1, 2]. The earliest evidence came from reports of the clustering of myelodysplastic syndrome (MDS) and PNH in known cases of AA. Many case reports, series, and structured genetic studies have provided evidence of clonal hematopoiesis (>50%) and the development of clonal diseases in AA. Complications of clinically relevant PNH have been described in 15–25% of patients with accquired AA treated by IST. However, MDS and acute myeloid leukemia (AML) are reported in 5–15% of AA cases within 5–11 years [3]. The significantly increased risk of clonal evolution in the context of inherited bone marrow failure disorder (IBMF) is attributed to the nature of the genetic lesions of these syndromes [2].

Philadelphia positivity is a hallmark of chronic myeloid leukemia (CML) and well described in acute lymphocytic/lymphoblastic leukemia (ALL). BCR-ABL positivity in AML has been investigated and raised doubts regarding CML in blast crisis [4]. With emerging data, the World Health Organization (WHO) described Philadelphia (Ph)/-positive AML in 2016 as a provisional entity under the heading “AML with recurrent cytogenetic abnormalities” [5]. Ph positivity in AML is a rare event and usually falls in one of the three types: AML-not otherwise specified, AML with myelodysplasia-related changes, and core-binding factor (CBF) AML, with Ph as an additional abnormality. A subset of Ph-positive AML has been reported during the evolution in known cases of MDS [6]. However, to the best of our knowledge, the development of Philadelphia-positive AML in AA has not been reported.

We hereby report this unusual case of clonal evolution to Philadelphia-positive AML in a case of AA on the wheels of PNH.

Bone marrow aspirate showed fat-rich marrow fragments with a paucity of normal hematopoietic elements. Biopsy (Fig. 1A) revealed a hypocellular marrow, with overall cellularity of less than 5%. Stress cytogenetic testing showed no difference in sensitivity to mitomycin C between the patient and the control. Peripheral blood smear showed a normal karyotype of 46 XX. PNH testing by multiparametric flow cytometry (FCM) fluorescent aerolysin (FLAER)-based assay (sensitivity 1%) showed absence of PNH clones. A final diagnosis of severe AA was made after ruling out secondary causes of myelosuppression.

The patient was started on oral IST (cyclosporine and anabolic steroids) and counseled to receive bone marrow transplant as the treatment of choice. Due to resource constraints, the patient received oral immunosuppressive therapy. She was transfusion-independent for 4 years and showed partial response to therapy. The patient again presented to the outpatient department with anemia symptoms in June 2017, with no history suggestive of bleeding or recurrent infection. Examination revealed no organomegaly. A routine workup with PNH assay was ordered. The FCM-FLAER-based assay showed 59% PNH clones in granulocytic series and 47.3% clones in monocytic series. The patient’s cytopenia continued to worsen with no response to treatment. Repeat PNH testing was advised. PNH testing was performed in January 2018 using CD45, FLAER, CD15, CD24, CD64, and CD14 on a multiparametric FCM platform. CD45 side-scatter (Ssc) dot plots showed a cluster of events in CD45 dim and a moderate side-scatter area in the blast region. Peripheral smear examination of the same sample revealed 25% blasts and no basophils. Bone marrow evaluation showed >90% blasts (Fig. 1B), which were positive for non-specific esterase and myeloperoxidase stain on cytochemistry analysis. FCM immunophenotyping of the blasts showed positivity for CD13, CD33, CD34, HLA-DR, MPO, CD64, and CD11c, suggesting AML with monocytic differentiation. Cytogenetic analysis of the bone marrow revealed t (9;22)(q34; q11) and t (7;17)(q22:q21) in all 20 metaphases (Fig. 2). The patient showed no splenomegaly at this presentation. A final diagnosis of clonal evolution to Ph-positive AML in a known case of AA was made. The patient had febrile neutropenia and was treated with broad-spectrum antibiotics and antifungal agents. She denied any chemotherapy and left against medical advice. The patient has since been lost to follow-up. 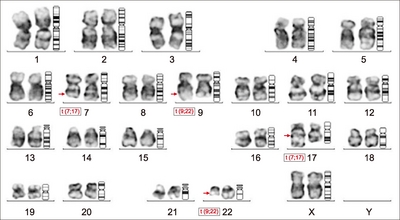