Bendamustine is an attractive option for the management of both de novo and relapsed lymphomas. It is being increasingly used in the conditioning regimen for autologous stem cell transplantation (SCT) and can be an alternative to the traditionally-used carmustine. In this study, we aimed to determine the safety and efficacy of bendamustine in the conditioning regimen for autologous SCT in refractory/relapsed lymphomas.

We designed a descriptive study to evaluate bendamustine in combination with etoposide, cytarabine, and melphalan (BeEAM) in the conditioning regimen for autologous SCT.

Our study showed that bendamustine is a potentially toxic agent in the conditioning regimen for autologous SCT, resulting in significant liver, kidney, and gastrointestinal toxicity. Further studies are required to assess its safety and efficacy at reduced doses.

Hodgkin's lymphoma (HL) and non-Hodgkin's lymphomas (NHL) are highly chemotherapy-sensitive tumors. However, there is a significant subset of patients who relapse or who never achieve complete remission. Second line salvage chemotherapy has been shown to be very effective in patients with chemosensitive diseases with CR rates greater than 50%, as observed with aggressive second line chemo immunotherapy in relapsed diffuse large B cell lymphoma (DLBCL) [12].

However, the prognosis is usually poor with conventional salvage regimens alone [34]. High dose therapy (HDT) followed by stem cell rescue is the treatment of choice for patients with relapsed/refractory lymphoma. Philip et al. [5] demonstrated a statistically significant difference in 5-year event-free survival (46% vs. 12%; =0.001) and OS (53% vs. 32%; =0.038) for patients undergoing autologous stem cell transplantation (ASCT) and salvage chemotherapy, respectively. With improvement in supportive care and management of toxicity resulting from the conditioning regimen, the survival rates after ASCT are approaching 60% for B cell lymphomas [6] and 40–70% in patients with HL [78].

Carmustine, etoposide, and cytarabine with melphalan (BEAM) is the most common conditioning regimen used for ASCT for relapsed lymphoma. Other regimens that have been studied include cyclophosphamide (BEAC), cyclophosphamide, carmustine, and etoposide (CBV), and cyclophosphamide-TBI (total body irradiation), but BEAM remains the preferred conditioning regimen [910]. Recently, availability of carmustine has been problematic in certain parts of the world. Therefore, there is increasing interest in exploring other active agents that could potentially replace carmustine in the conditioning regimen for ASCT. Bendamustine is an attractive option to replace carmustine because it combines the alkylating activity of the nitrogen mustard group with the antimetabolite activity of the purine analog structure (benzimidazole ring). Given the uniqueness of its chemical structure, it has a different mechanism of action from traditional alkylating agents. Carmustine demonstrates only partial cross-resistance (in vitro) with other alkylating agents. It leads to cell death via single and double strand DNA cross-linking, and has also been shown to activate apoptotic pathways [11]. Therefore, bendamustine has clinical potential for treating diseases that are refractory to alkylators. It has shown superior efficacy compared to standard therapies for relapsed chronic lymphocytic leukemia and indolent NHL [12], and is considered a standard first line treatment for indolent B cell lymphoma [13]. These data make it an attractive option as part of the conditioning regimen in ASCT.

Carmustine is not available in Pakistan. After encouraging results from a study by Visani et al. [14] demonstrating efficacy and manageable toxicity of cotreatment of bendamustine with etoposide, cytarabine, and melphalan, we have been exclusively using bendamustine, cytarabine, etoposide, and carmustine (BeEAM) as the conditioning regimen for ASCT to treat relapsed/refractory lymphoma at our institution. Here, we present the safety and efficacy data from use of the BeEAM protocol from the last 2 years.

High-dose therapy followed by ASCT is the standard of care and the treatment of choice for eligible patients with chemosensitive, aggressive, relapsed NHL and HL. This treatment has been validated by the PARMA and the CORAL studies, which demonstrated a significantly higher survival rate of greater than 50% after high-dose chemotherapy and autologous bone marrow transplantation than after conventional chemotherapy [15]. Despite the improved survival rates provided by HDT/ASCT, applicability of this treatment to all relapsing patients is limited. Several factors impacted survival. Disease status is an important predictive factor for survival. Transplant-related morbidity and mortality is another important determinant of outcome.

The BEAM protocol has been the conditioning regimen of choice for ASCT since the initial report by Mills et al. [8] published in 1995. They reported that 5-year overall survival and progression-free survival rates were 41% and 35%, respectively, with an early procedure-related mortality rate of 7%. Over the years, improvement in patient selection, mobilization techniques, and supportive care has resulted in survival of greater than 70%, and TRM rates less than 2% [1617]. A retrospective review published by Reid et al. [18] showed a trend toward better 3-year OS and PFS in response to an outpatient BEAM regimen compared to an inpatient BEAM regimen. This was also accompanied by a better toxicity profile. Furthermore mBEAM showed good tolerability, with the most frequently observed non-hematologic toxicity being oral mucositis, mainly of grade I/II (47%). This tolerability was better than the BEAM regimen [11] or variants such as FEAM5 and BeEAM [19].

Late toxicities, however, remain a serious concern. Studies have revealed that non-infectious interstitial pneumonitis resulting from BCNU-containing regimens was a serious complication, reported in 16–60% of the patients, with an associated mortality rate of 9% [820]. BCNU-containing conditioning regimens have also been associated with an increased risk of non-relapse mortality when compared with other regimens [1920212223]. Many regimens have been tested, and the BEAM regimen remains the standard of care despite its known serious side effects.

Unavailability of carmustine in many parts of the world has led to efforts to develop a conditioning regimen without carmustine. Visani et al. [14] reported results of a Phase I/II study using increasing doses of bendamustine (160 mg/m2, 180 mg/m2 and 200 mg/m2 given on day −7 and day −6) with fixed doses of etoposide, cytarabine, and melphalan (BeEAM regimen), administered as a preparative regimen for ASCT. Forty-three patients with resistant/relapsed HL (N=15) and NHL (N=28) were enrolled, with 9 in the phase I and 34 in the phase II studies. No patients experienced dose-limiting toxicity. TRM at day 100 was 0%. The follow-up period at the time of publication was 18 months, with 81% of patients alive and disease-free at that time. Mucositis and GI toxicity were the most commonly observed side effects. No grade III/IV nephrotoxicity or cardiotoxicity was reported. These encouraging results led to further studies evaluating bendamustine as a component of the conditioning regimen.

In a large French multicenter study (Lysa group), bendamustine was administered at a median dose of 191 mg/m2/day (range, 50–250 mg/m2/day) on days 6 and 7 with standard doses of etoposide, melphalan, and cytarabine. The results of this study highlighted early toxicities with bendamustine which may have been underrepresented in the Visani study due to small sample size. One hundred seven (28%) patients developed grade I-IV nephrotoxicity. Patients who developed ARF were also more likely to experience colitis, pneumonitis, cardiac arrhythmias, intensive care admission, and death. Multivariate analysis showed that creatinine level at day 1, bendamustine dose >160 mg/m2, and age were independent prognostic factors for ARF. Ten percent of patients needed intensive care management, and the toxic death rate was estimated at 5% [24]. Garciaz et al. [25] reported increased nephrotoxicity in response to BeAM in their patients. Nine (31%) patients developed early renal toxicity before the day of reinfusion, of which four (14%) patients experienced grade 3–4 renal impairment. At day 30, the cumulative incidence of nephrotoxicity was 48% (17% of grade 3–4), whereas in the BEAM cohort, renal impairment was only observed in 7% of patients (5% of grade 3–4, <0.001). As also noted by the Lysa group, patients who developed nephrotoxicity were more likely to need admission to the intensive care unit [24% of patients in the Lysa group vs. 10% of patients in the BEAM group (=0.07)]. Cardiotoxicity was also more common in the BeAM group, with grade 2–3 cardiac toxicity observed in 10% of patients (vs. 2% in the BEAM cohort, =0.02).

Our study showed a similar toxicity profile. Twenty-eight percent of our patients developed grade III-IV nephrotoxicity. In addition, we saw a higher incidence of grade II-IV colitis and hepatotoxicity than reported in previous studies. Septic shock and respiratory failure were observed in 28% and 50% of patients, respectively. Four patients (28%) in our cohort died in the early transplant period as a result of septic shock and its complications. The cause of the higher incidence of toxic death compared to that in other similar studies is unclear and needs further examination. One hypothesis is that higher doses of bendamustine were responsible for increased toxicity. The Lysa group reported increased toxicity at doses greater than 160 mg/m2. In our protocol, we used 150 mg/m2 of bendamustine at days 4 and 5. Despite this dose reduction, we observed significant toxicities. Therefore, it is our opinion the appropriate dose and schedule of bendamustine requires further study.

In conclusion, in our retrospective analysis, we reported a high incidence of renal and cardiac toxicity and an unusually high transplant-related mortality of 28% with bendamustine in the conditioning regimen for autologous stem cell transplant. Therefore, bendamustine should be used with caution. Prospective comparative studies are needed to confirm the appropriate dose and schedule of bendamustine, and to further evaluate the toxicities noted in retrospective studies before it is routinely adopted in clinical practice. 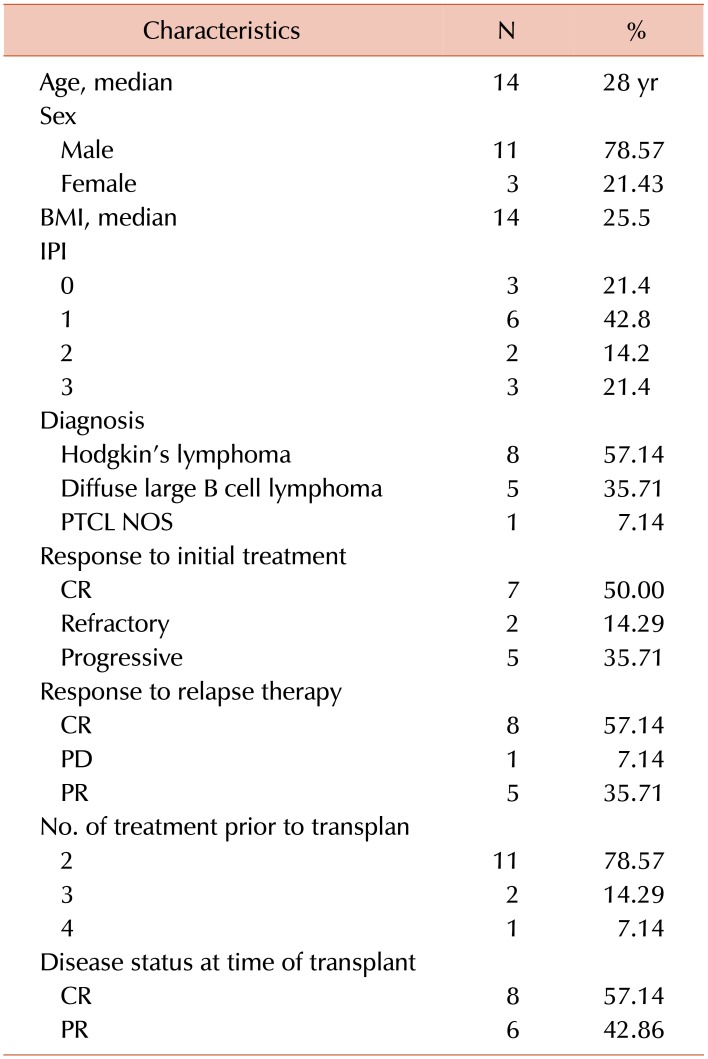 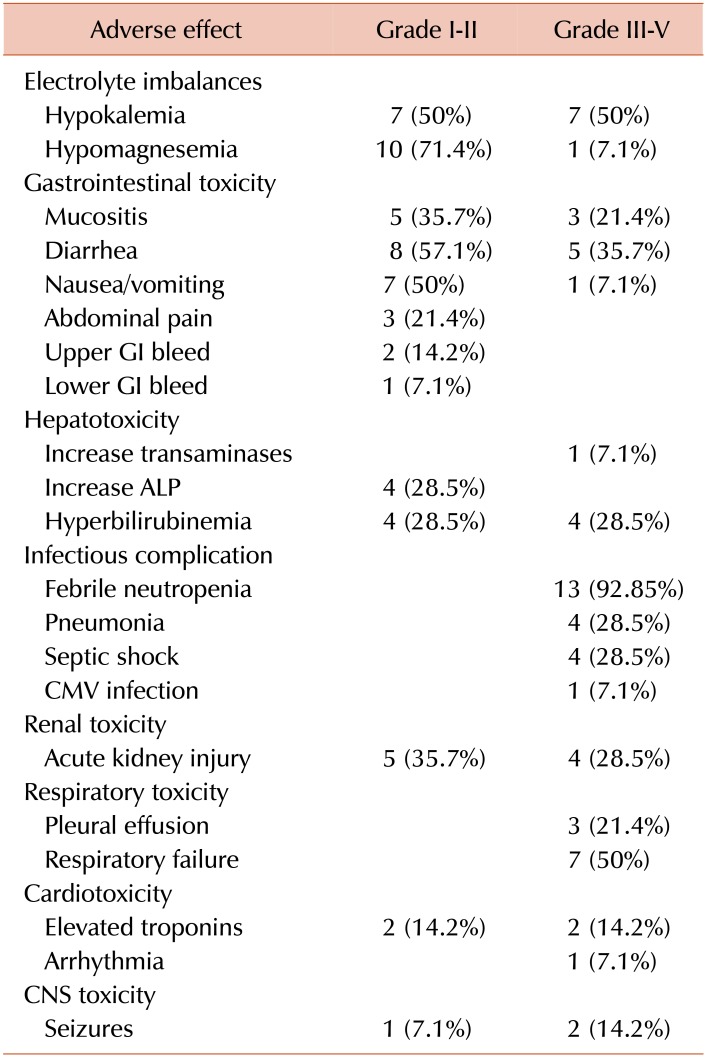