Although allogeneic hematopoietic cell transplantation (HCT) is the only curative treatment option for myelodysplastic syndrome (MDS), a substantial number of patients experience relapse. We reviewed the clinical outcomes of patients with MDS who relapsed after allogeneic HCT.

Thirty patients who experienced relapse or progression after allogeneic HCT for MDS between July 2000 and May 2016 were included in this retrospective analysis.

The median time from HCT to relapse was 6.6 (range, 0.9–136.3) months. Donor lymphocyte infusions (DLIs) were administered to four patients: one achieved complete remission (CR) and survived disease free, while three did not respond to DLI and died. Hypomethylating agents were administered to seven patients: one who had stable disease continuously received decitabine, while six died without response to treatment. Six patients received AML-like intensive chemotherapy, and three achieved CR: two underwent second HCT and one DLI. One patient receiving second HCT survived without disease, but the other two relapsed and died. Three, four, and eight patients who did not respond to intensive chemotherapy, low-dose cytarabine, and best supportive care, respectively, died. One patient who underwent second HCT following cytogenetic relapse survived disease free. Median overall survival after relapse was 4.4 months, and relapse within 6 months after HCT was associated with shorter survival.

Outcomes of MDS patients relapsing after allogeneic HCT were disappointing. Some patients could be saved using DLI or second HCT.

Myelodysplastic syndrome (MDS) is a clonal hematopoietic disorder characterized by ineffective hematopoiesis, peripheral cytopenia, and potential evolution to acute myeloid leukemia (AML). Although there have been attempts to improve the outcomes of patients with MDS using hypomethylating agents (HMAs), lenalidomide, and other novel agents, allogeneic hematopoietic cell transplantation (HCT) is considered to be the only curative treatment option. In general, allogeneic HCT is offered to patients expected to be at a high risk of progression to AML and having shorter survival or those who have severe complications or heavy transfusion burden due to disease-related cytopenias. The long-term survival rate following allogeneic HCT is reported to be 30–50%. Approximately 25–40% of patients experience disease relapse after HCT, and outcomes of the relapsed patients are generally poor [1]. Although salvage treatment strategies, including HMA, donor lymphocyte infusion (DLI), and second HCT have been attempted, there is no available standard of care for MDS patients who experience relapse after allogeneic HCT [2]. Medical records of MDS patients who relapsed after HCT were reviewed to identify the clinical courses and treatment outcomes following relapse and to investigate the optimal therapy for these patients.

The time interval between HCT and relapse was considered to be an important prognostic factor for survival after relapse [4578]. The French group's study showed that relapse within 6 months after HCT (HR, 2.69; 95% CI, 0.82–3.98; <0.001) and progression to AML at relapse (HR, 2.59; 95% CI, 1.75–3.83; <0.001) were associated with poor survival outcomes in patients relapsing after HCT for MDS [4]. The Spanish group's study found that the time interval between the first and second HCT and disease status at the second HCT were significant factors for survival [7]. Sauer et al. [5] analyzed the treatment outcomes of 108 patients who relapsed after allogeneic HCT for AML or MDS. Results showed that the time interval from allogeneic HCT to relapse was the only independent predictor for response to salvage therapy and OS. Our study also showed poor outcomes in patients with relapse within 6 months after HCT and confirmed early relapse as a dismal prognostic factor.

The treatment of patients relapsing after allogeneic HCT for MDS is challenging, and various treatment strategies have been attempted. In this study, there were three disease- free survivors: one who underwent the second HCT for cytogenetic relapse, one who received the second HCT after achieving CR with intensive chemotherapy, and one who received DLI for low disease burden. DLI is one of the most commonly used interventions for the management of relapse after HCT. The Adult AML Working Group of the Japan Society for Hematopoietic Cell Transplantation reviewed 143 AML patients receiving DLI for hematological relapse after HCT, and the 5-year OS was 7% [8]. Eleven (8%) patients in the study received DLI after achieving CR, and long-term survival was observed almost exclusively in patients who achieved CR before DLI. Outcomes of DLI with or without chemotherapy for AML or MDS relapse after T-cell-depleted RIC HCT were investigated in 51 patients, and the 5-year OS was significantly different according to the time interval between DLI and HCT (within 6 mo vs. >6 mo, 11% vs. 51%, =0.008) and CR achievement before DLI (persistent vs. CR, 24% vs. 53%, <0.01) [9]. The abovementioned two studies regarding DLI as treatment for AML or MDS relapse after HCT showed that the effects of DLI were limited to the patients with low tumor burden; thus, early detection of disease relapse may be the key factor for long-term survival. In a prospective study, the combination of azacitidine and DLI as treatment for the 30 patients who relapsed after HCT for AML or MDS induced CR in seven (23%) patients and PR in two (7%), and five patients remained in CR [6]. The second HCT has been attempted for the treatment of AML or MDS relapse. The Spanish group published the outcomes of 116 patients who underwent the second allogeneic HCT as treatment for relapsed myeloid malignancies (AML, MDS, and myeloproliferative neoplasm), and the 5-year OS was 32% [7]. Oran et al. [10] reported the outcomes of AML and MDS patients who relapsed after allogeneic HCT using RIC and were treated at MD Anderson Cancer Center. The results showed that a number of patients who underwent the second HCT as the initial salvage or consolidation therapy achieved long-term survival compared with those receiving other salvage treatments or supportive care (median OS of 25.3 vs. 2.4 vs. 1.6 mo, =0.0001). In the French group's study, patients receiving DLI or second HCT showed significantly longer survival than those treated with other salvage treatments or BSC [4]; in another study, the response to salvage therapy was significantly improved in patients treated with a combination of chemotherapy and allogeneic cell-based therapy compared with those treated with chemotherapy alone [5]. Preemptive administration of azacitidine was attempted in 20 patients with imminent relapse (CD34+ donor chimerism <80%) after HCT for AML or MDS, and 16 (80%) patients responded with either increasing CD34+ donor chimerism or stabilization without relapse [11]. However, 65% of the patients eventually experienced disease relapse. In our study, seven patients received azacitidine or decitabine for the treatment of relapse after HCT; however, significant response was not observed. In patients relapsing after HCT for MDS, HMA alone seems insufficient to obtain a reliable response, and an immunological approach with DLI or second HCT should be considered for long-term disease-free survival.

In conclusion, the outcomes of patients relapsing after allogeneic HCT for MDS were very poor, especially in those with early relapse after HCT. However, a minority of patients who had low tumor burden benefited from an immunologic approach using DLI or second HCT. Early detection of relapse and immunotherapeutic approaches with effective cytoreductive treatment will improve the outcomes of relapsed patients. 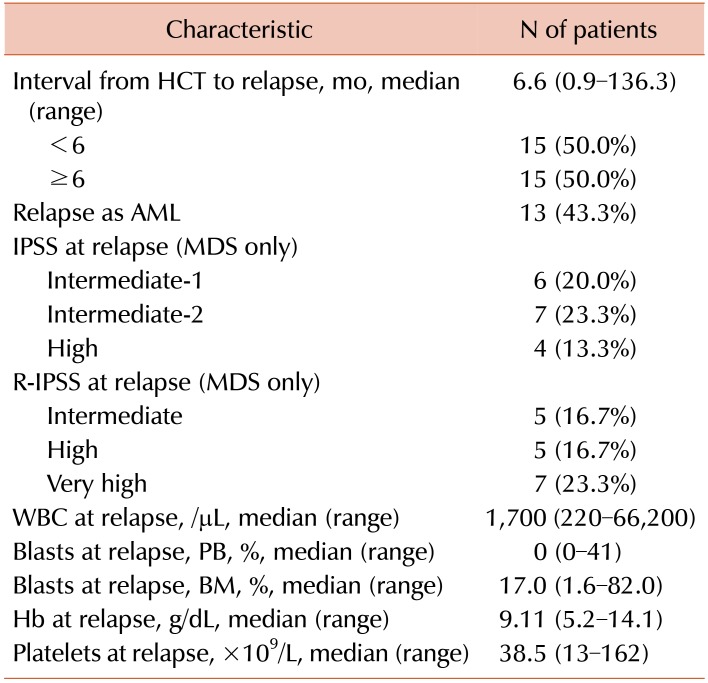 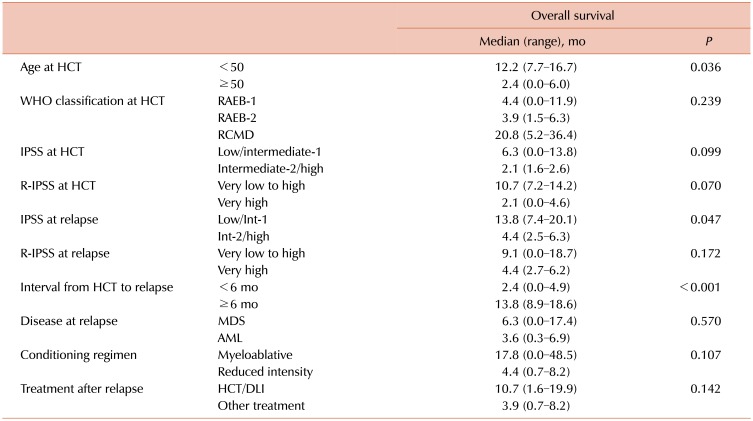