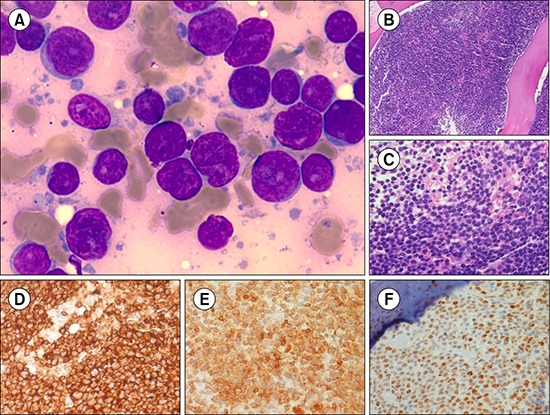 Lymphoglandular bodies are round, pale, basophilic fragments of cytoplasm in lymphoid tissues. They are most commonly seen in fine-needle aspiration cytology smears in cases of hematolymphoid neoplasms, and more often in B-cell neoplasms than T-cell lymphomas or myeloid leukemias. Whenever a BM aspirate shows lymphoglandular bodies, a high index of suspicion for hematolymphoid neoplasms, especially B-cell neoplasms, should be kept in mind. Furthermore, in high-grade lymphoma with blast-like morphology in the BM, presence of lymphoglandular bodies may favor a diagnosis of lymphoma rather than acute leukemia, which can be further confirmed and classified by immunohistochemistry.