The clinical characteristics of elderly patients with AML differ from those of younger patients, resulting in poorer survival and treatment outcomes. We analyzed retrospectively the clinical data of AML patients 65 years old and above to describe patients' characteristics and treatment patterns, and to define meaningful prognostic factors of survival in the Korean population.

Basic patients' characteristics, clinical outcomes according to treatments, and prognostic factors associated with survival and treatment intensity were examined in a total of 168 patients diagnosed in 5 institutes between 1996 and 2012 as having AML.

Acute myeloid leukemia (AML) is the most common acute leukemia in adults. The median age of patients is 65-70 years of at diagnosis [1]. Intensive treatments such as high-dose chemotherapy and hematopoietic stem cell transplantation are effective in improving the survival of these patients [2]. However, many patients are not eligible for these treatments owing to their advanced age, poor performance, or comorbidity. Furthermore, factors negatively influencing treatment outcomes, including adverse cytogenetic and molecular aberrations, antecedent hematologic disorders, and the incidence of fatal infection or bleeding, are more frequent in old age [3]. As a result, the prognosis of elderly AML patients is very poor even with intensive treatment [3, 4, 5, 6, 7].

For these reasons, studies have been performed to identify optimal patient characteristics and optimal treatment regimens in elderly patients with AML. Specific parameters including clinical manifestations, laboratory values, and molecular and genetic markers have been suggested as prognostic or predictive factors [7].

In this study, the median survival in the HIR and LIR groups was significantly longer than that in the SC group among all patients and in the intermediate-risk group. This significant difference among treatment groups was consistently observed even when meaningful prognostic factors such as ECOG-PS, Hb level, and CRP level were forced into the model (=0.001). A possible explanation for these observations is that the patients who received HIR had more favorable clinical characteristics than those in the SC group. Comparing patients who received the HIR treatment to those in the SC group, the former were younger (average age 70.5±3.7 years vs. 75.7±5.7 years, respectively, =0.01), had better ECOG-PS (0-1 vs. >1, respectively, =0.049), had lower HCT-CI (0-1 vs. >1, respectively, =0.049), had higher average platelet counts (91.0±81.5×109/L vs. 109.0±150.5×109/L, respectively, =0.029), and had lower average Cr levels (1.0±0.3 mg/dL vs. 1.3±1.6 mg/dL, respectively, =0.0333). This suggests that careful patient selection for high-intensity treatment with a meaningful use of prognostic factors could result in better clinical outcomes even in elderly AML patients.

Various prognostic or predictive models for elderly AML patients have been suggested to better predict clinical outcomes. Many factors, including age, PS, comorbidity, antecedent hematologic disorders, adverse cytogenetics, LDH level, blood cell counts, liver or kidney function, other laboratory values, and genetic profiles, have been reported as meaningful prognostic or predictive factors [7]. In our multivariate analysis, age, ECOG-PS, Hb level, and Cr level were defined as prognostic factors (Table 4). Because of the higher incidence of treatment-related mortality in elderly AML patients, selecting the optimal treatment intensity is of primary importance in improving clinical outcomes. Intensive treatment could be helpful for selecting patients who are expected to tolerate it. In our study, ECOG-PS, Hb level, and CRP level were suggested to be prognostic factors for the outcomes of intensive treatment (Table 5). However, although other studies have shown significant differences among the survival of general AML patients classified into different cytogenetic risk groups according to the SWOG/MRC criteria, such differences were not observed (=0.394) in our study. This might be due to several reasons: the cytogenetic diagnosis may not have been accurate enough to enable the classification of each patient into the correct risk group, the lack of a sufficient number of patients, or clinical risk factors such as secondary AML (N=16) and AML with MDS-related changes (N=32), which are not listed in the SWOG/MRC criteria, may have been more common in our elderly AML patients.

Several phase III trials of intensive chemotherapy given to elderly AML patients reported CR rates of 30-50% after induction of treatment [9, 10, 11]. In our study, CR rate was 42.9% and the response rate was 58.4% in the HIR group. The patients with CR in this group had longer survival than non-CR patients (16.3 months vs. 3.2 months, respectively, <0.0001) (Fig. 3). There was no significant difference in the responses within the LIR group, probably due to the low number of patients. These results imply that a considerable length of survival can be expected even in elderly AML patients when they show CR with intensive treatment.

Even though this study has the limitation of a retrospective study, the results are worthy of notice. This study reports the practical aspects of treatment patterns and outcomes in elderly AML patients in 5 Korean institutes. It shows that clinical characteristics and outcomes in the Korean patients are similar to those in patients of western countries, and highlights the role of the same meaningful prognostic factors such as age, ECOG-PS, Hb level, Cr level, and CRP level. It also suggests that careful selection of patients receiving intensive chemotherapy could bring about better outcomes in elderly AML patients.

The median survival of all patients was 4.5 months (95% CI: 2.4-6.7 months). Kaplan-Meier analysis of overall survival according to the cytogenetic risk group.

In the high-intensity regimen group, survival of the patients showing complete remission (CR) was significantly longer than that of patients who did not show CR (non-CR) (<0.0001). 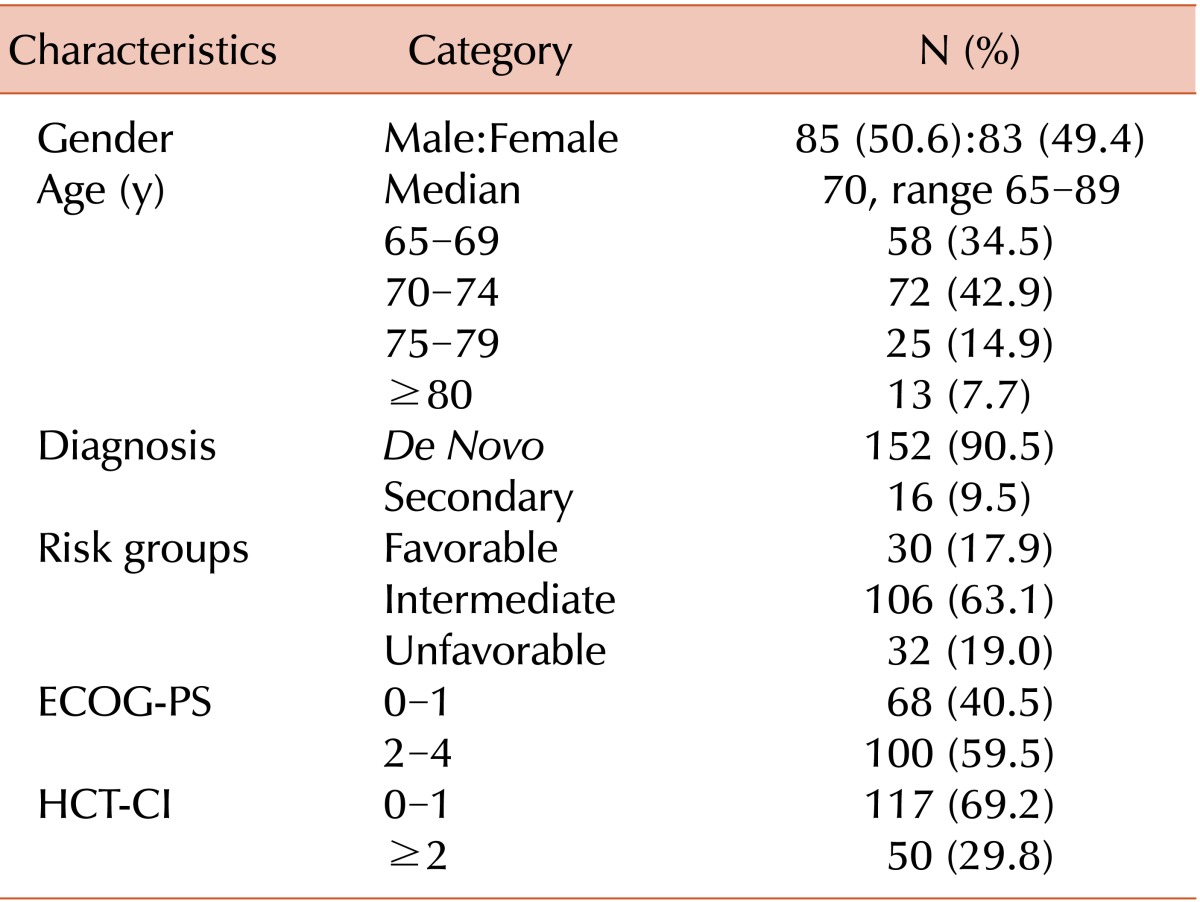 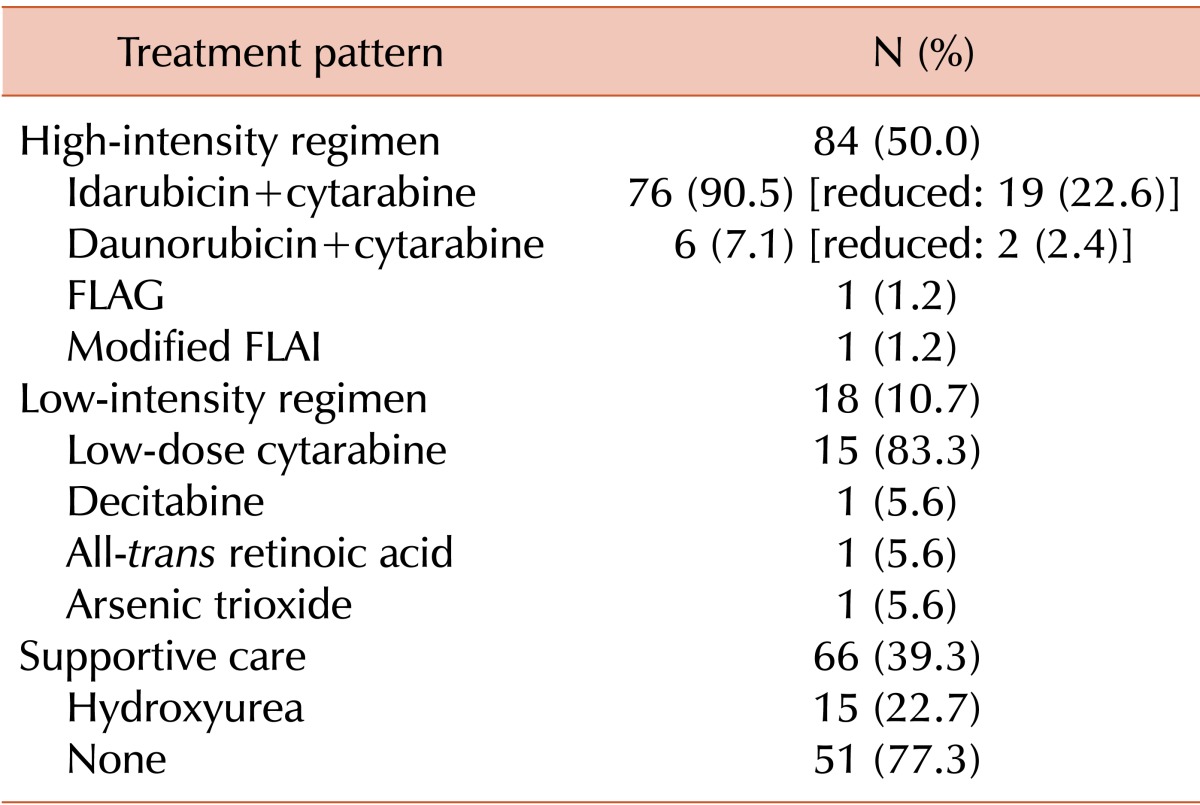 Clinical outcomes according to treatment intensity. 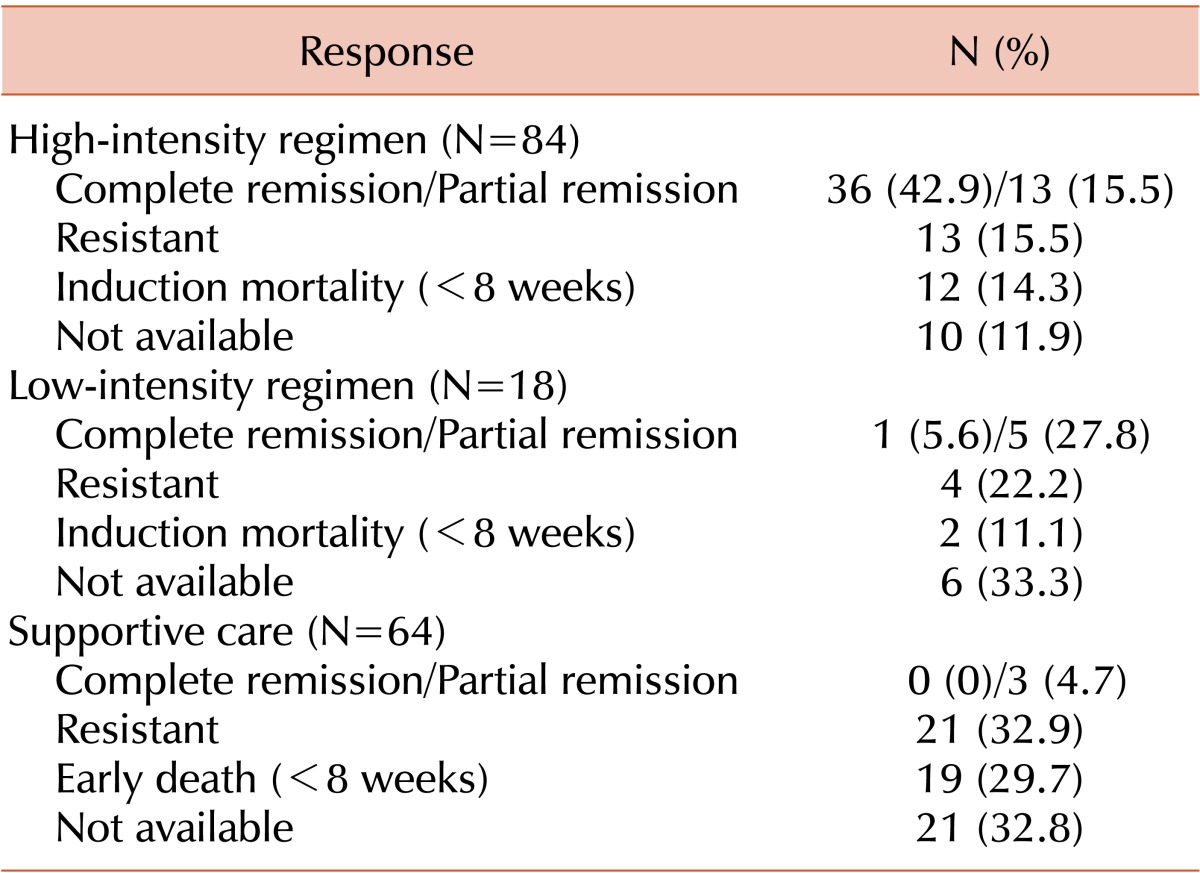 Prognostic factors for survival in all patients.